President of Abkhazia Aslan Bzhania and Chairman of the Supreme Council of the World Abaza Congress Mussa Ekzekov held a working meeting.

The Chairman of the Supreme Council of the World Abaza Congress, Mussa Ekzekov, within the framework of a two-day working visit to Abkhazia, met with the President of the Republic, Aslan Bzhania. The meeting took place in the Presidential Administration and lasted about an hour and a half. Mussa Ekzekov and Aslan Bzhania communicated without the press.  Following the meeting, a press scrum was organized, within which Mussa Ekzekov answered questions from journalists.

"We talked about what conditions need to be created in order for Abkhazia to develop systematically, consistently and dynamically. How and which program should be established so that we reach every Abkhazian family and every person in Abkhazia can actively participate in the processes of harmonization of society, social and economic development of the state," said Mussa Ekzekov.

The Chairman of the SC of the WAC noted how, using the example of the construction of a tourist complex in the village of Tamysh, Ochamira district "Tamysh Village" (a tourist complex that was built with the involvement of a Russian investor. The complex was officially opened in July 2021 - ed.) they together with Aslan Bzhania discussed possible investment projects aimed at the development of Abkhazian villages.

"Such projects as "Tamysh Village" revive the village, provide people from nearby villages with jobs. It is important to create all the necessary conditions in order to protect investments. We talked about how to strengthen the laws so that the investor confidently comes to Abkhazia. We also discussed in detail the possibility of creating a community of Abkhazian businessmen, which will prepare a socio-economic program and participate in it jointly," Ekzekov said.

According to him, the meeting also raised issues of development and preservation of the Abkhaz language, popularization of Abkhazian history and culture. 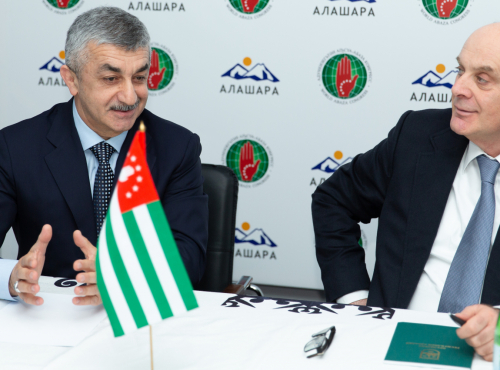 "We talked about what kind of platform can be created that would help in the development of the Abkhaz language, various cultural projects, help strengthen the Apsuara (moral and ethical code of the Abkhaz-Abaza people - ed.) as a whole," said Mussa Ekzekov.

He also said that the President highly appreciates the work of the World Abaza Congress.

"Aslan Bzhania closely follows the work of the World Abaza Congress, highly appreciates the work and fully supports it," said the head of the Congress.

Mussa Ekzekov and Aslan Bzhania decided that, in continuation of the agreements reached on cooperation, representatives of the WAC and the Presidential Administration will soon hold working meetings. According to Ekzekov, this will "further enhance the efficiency of the Congress."

This is the second working meeting of the Chairman of the Supreme Council of the World Abaza Congress Mussa Ekzekov with the President of Abkhazia Aslan Bzhania. The previous one took place at the end of March this year. Then Aslan Bzhania expressed a desire to personally meet the WAC team and visited the Congress office in Sukhum.