Festive events and celebrations in honor of the 10th anniversary of the international recognition of Abkhazia by the Russian Federation took place in the Republic on 26 August.

The anniversary of recognition of independence was celebrated in Sukhum: exactly 10 years ago on August 26, Dmitry Medvedev, at that time the Russian President, informed the world community about the recognition of the independence of the republics of Abkhazia and South Ossetia.

«Vladislav Ardzinba - an outstanding personality, forever included in our history. I have noticed many times that he is remembered not only on memorable dates, but also in everyday life. The young generation is proud of him, they dream to become like him. And this is the most important value, it is confirmation that our first president was truly an outstanding person,» - said young Abkhazian football player Ramin Bargandzhia. 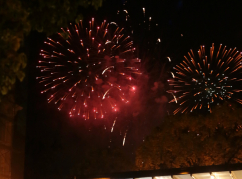 Bright colors of the holiday: how the anniversary of recognition of Abkhazia's independence was celebrated in Sukhum

On August 26, the people of Abkhazia also honored the memory of the second president of the republic, Sergei Bagapsh. People from all over Abkhazia come to his native village of Dzhgerda in order to lay flowers and wreaths to his grave.

«I well remember his speech on one of the Russian TV channels, just dedicated to the recognition of Abkhazia's independence. I was in Voronezh, my heart bleed, I was proud of him, of his words. Thank him very much for everything he did for our country, and an eternal memory,» remembers Sergei Bagapsh, a resident of Voronezh, a native of Abkhazia, Zaira Darcham, who, along with her son, came to take part in the festive events.

On this day, residents and guests of the capital of Abkhazia also laid flowers in the Park of Glory. There were many of those wishing to honor the memory of the soldiers who died during the Georgian-Abkhaz war. People came from all regions of Abkhazia.

«They died without fear and reproach, fighting for every scrap of their native land. Their heroism will remain in history, their courage will be an example for the younger generations. We came here to say the main thing: no one is forgotten,» noted Gagra resident Astamur Aristava.

10 years have passed in the blink of an eye.

In the Central Exhibition Hall of the Union of Artists of Abkhazia, within the framework of the Independence Day, the opening of the photo exhibition "The Holiday of Recognition» by Ibrahim Chkadua and Vladimir Popov took place.

The exhibition presents the chronology of the main aspects of the political history of the Republic of Abkhazia for a quarter of a century of the country's independence.

«The exhibition is a collection of photographs of historically significant figures of world and Russian politics who visited Abkhazia over the period of 25 years. It is socially significant in that it demonstrates the political path reflected in the events and personalities involved in these events. This is a segment of our modern history, which included the international blockade, the moment of recognition and the first official state visits. It's time to look around, remember, evaluate and reevaluate,» said one of the authors of the exhibition, Ibrahim Chkadua.

The guests of the exhibition noted its uniqueness and importance.

«This is a unique archive, which mentally brings us back to all the most fateful events in the history of our country. Thanks to the authors for capturing so many important historical events, outstanding people. I strongly recommend that all parents bring their children to this exhibition. It is important to tell and show the younger generation how everything was,» the visitor of the exhibition Linda Tarba shared her impressions.

The exposition will last until September 5, after which the exhibits will be transferred to the Abkhazian State Museum.

The capital of Abkhazia looks different on this day: people with flags were walking all over the place, greeting each other warmly. In the air, there was a sense of celebration, in many ways also because a real fruit and vegetable paradise emerged on the Sergei Bagapsh square. Delegations from all regions of the Republic set up fair tents, presenting Sukhum guests with their own grown agricultural products and dishes of national cuisine.

«It’s an eye opener, what an abundance. Thank God for this beautiful land. We live in paradise, I wish us wisdom to preserve and multiply all that we have,» - said the participant of the fair.

Guests of the holiday went into tents, where they were offered national dishes, and where they could raise a toast to the welfare of Abkhazia. 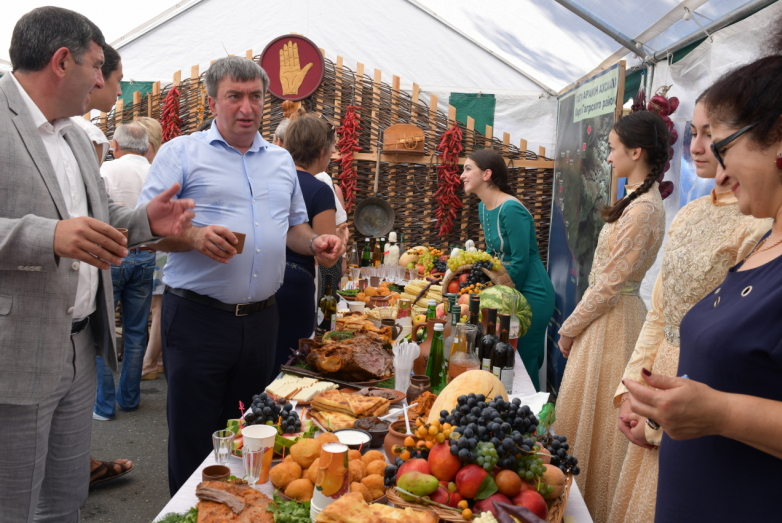 A fair was opened at the Sergei Bagapsh square, where delegations from all over Abkhazia presented their agricultural products
© WAC

«We came from Krasnodar. We have friends in Abkhazia. Back then, 10 years ago, we were happy to hear that Russia recognized theindependence of Abkhazia. It's really paradise on earth, look around - it's really wonderful. Everything is so tasty and natural,» - said the tourist from Russia Svetlana Khotsanian.

The holiday was continued by the concert, which was held in the Abkhazian drama theater named after Samson Chanba. The solemn event was attended by the President of Abkhazia Raul Khadzhimba, who congratulated the people of the republic.

«We have been going for recognition for a long time and persistently. Even in the most difficult times, when the country that won the bloody war was in devastation and blockade and we hardly survived physically, no one doubted the chosen course for the construction of a sovereign and independent state. The people and the leadership of the country were united in a clear understanding of the key importance of the stated political goals,» - the President said.

Khadzhimba added that the recognition of Abkhazia by the Russian Federation entailed similar acts on the part of Venezuela, Nicaragua and other countries. Abkhazia strives for further development and strengthening of relations with these states and is ready for concrete steps in this direction.

Meanwhile, public festivities began on the Sukhum embankment. National songs were heard from everywhere. People in national costumes sang, danced and photographed. Every now and then, circles formed in which young people performed Caucasian dances. 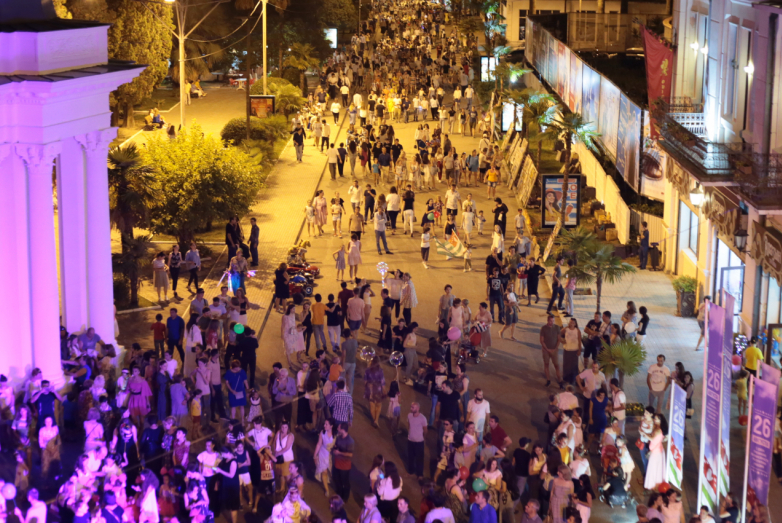 In the photo: Sukhum promenade during the festivities dedicated to the Day of recognition of Abkhazia's independence
© WAC / Ilona Khvartskia

Schoolgirl Mia Chokua knows well what day is today. She was told about it by her parents.

«I was then two years old, but my father and mother told me that there was a war, that it was difficult to live, and then Russia recognized our independence, this is what we are celebrating today. Happy holiday to us all!» - she said.

Eight-year-old grandson of the Hero of Abkhazia Galust Trapizanyan Mark came with his mother to Sukhum from Gagra in order to also take part in the festive events.

«We are told in school about the war, about those who died, about the victory. We are taught to be good people,» - Mark shared.

All, of course, waited for the festive salute. And now, at last, it illuminated the sky over independent Abkhazia, once again reminding everyone of this important jubilee date for the people and completing the holiday.

On August 26, 2008, Russian President Dmitry Medvedev, taking into account the free expression of the will of the Abkhaz and Ossetian peoples and guided by the provisions of international instruments, signed Decrees on the recognition by the Russian Federation of the independence of Abkhazia and South Ossetia. Since then, August 26 is celebrated annually in Abkhazia as a day of recognition of its independence.

Sukhum Day of recognition Holidays
To leave a comment you need
to login or register.
Share
No comments