Bebiya about the book “The Road to the Top”: my heroes attract with their inner content

A new book by Ekaterina Bebiya has been published, which contains dozens of stories about outstanding representatives of the Abaza people.

Dozens of stories about the life of prominent Abkhazians and Abaza were collected in the book “The Road to the Top” of the member of the Union of Writers and Journalists of Abkhazia, professor at the Abkhaz State University, famous Abkhaz journalist and publicist Ekaterina Bebiya.

This is the 49th book by Ekaterina Bebiya.  She shared that throughout her life she has been collecting materials about famous people.  Thus, the new book contains more than 30 essays, dozens of destinies are described.  Bebiya collected some essays for more than 20 years, working in the archives.

“While still a student, I began to collect materials about famous Abkhazians. Writing about them has become the meaning of my life,” the author admitted.

With particular enthusiasm the writer noted her essay from the book, dedicated to the Chairman of the Supreme Council of the World Abaza Congress Mussa Ekzekov.  The author named this essay “Amazing Mussa Ekzekov”.

It tells about the life of the outstanding representative of the Abaza people, about the goals and plans for the future of Mussa Ekzekov, about his childhood and youth, about victories and lessons learned from failures.

“Mussa Ekzekov is a truly amazing person.  I have known him for over 20 years and always follow with great respect what he does for the Abaza people. This year I was lucky to introduce him to my students, who took part in the Abkhazian-Abaza games. This meeting was very memorable for the students. Two hours passed unnoticed,” Ekaterina Bebiya shared her memories.

Another hero of her book is the rector of the Abkhaz State University Aleko Gvaramia.  The author has been writing about him for over 20 years.

“Throughout this time, I have been collecting photo, audio and video materials. A big work has been done,” the journalist said.

The heroes of “The Road to the Top” also became such outstanding personalities as the writer Bagrat Shinkuba, the famous Abkhazian politician and public figure Konstantin Ozgan, the architect Igor Smyr, the second President of Abkhazia Sergey Bagapsh, professor, academician Oleg Etlukhov, the famous linguist, the Vice-Rector in Charge of Research of the KChU  Sergey Pazov and many others.

Bebiya's essays on people show the complex life twists and turns of her characters, she reveals their character traits, paints expressive portraits, and archival sources become confirmation of events from their lives. All essays are accompanied by photographs, which become a visual aid in order to display the full image of the hero for the reader.  Most of the photographs belong to the author of the book.

“Everything I write about is filled with spiritual energy, my love for a person. Everyone I write about becomes kindred spirits to me. I will always remember about them, as they live in my books.  My journalistic duty and my motto to the society is to perpetuate the worthy with a pen. After all, what has been written does not die - this is a living memory that remains for centuries,” the writer is convinced.

Her own paths were intertwined with the heroes of the essays. They overlapped in the journalistic, scientific, pedagogical and public spheres.

In addition to personal observations, studies and archival excerpts made by the author, the “The Road to the Top” devotes much time to the stories of people who are well acquainted with the heroes, or their colleagues.

Ekaterina Bebiya herself is sure that any “road to the top” is never easy.

“It is filled with difficulties, hard decisions, but in order to overcome these difficulties, a person needs to be a fighter and never give up. The people to whom the essays in this book are dedicated are united by these human qualities - fortitude and being a fighter.  Each person creates his own destiny. The life of strong people is difficult, it makes them stronger. The characters in these essays attract [people to themselves] with a special inner content,” the author believes.

The Chairman of the Supreme Council of the World Abaza Congress Mussa Ekzekov expressed his gratitude to the writer. He noted that Ekaterina Bebiya has been working for the good of the Abkhazian-Abaza ethnos for many years, “without stopping for a minute,” telling about the life of its best representatives, about bright and tragic stages in the fate of the people.

“I would like to congratulate you with all my heart on such an interesting and very important book for all of us. I am convinced that you will continue to delight us with many interesting books.  And this 49th edition of yours will bring a lot of emotions to all those to whom the book is addressed. I bow down to you for what you have been doing since the first days of our meeting. I feel how deeply and sincerely you love our people. I want to emphasize the high quality of your work,” Ekzekov said. 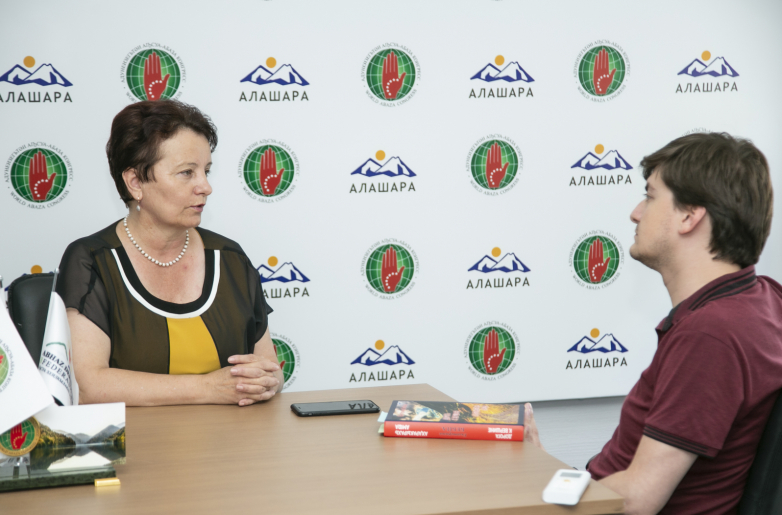 The circulation of the edition is 400 copies. The book will become available as early as next week, it will be available in one of the bookstores in Sukhum. The cost of one copy is 100 rubles.

Mussa Ekzekov: “Preservation of my people has worried me since childhood”
Three wonderful days at the festival in the KChR: sketches of journalist Ekaterina Bebia

From 41 to 50: We speak Abkhazian / We speak Abaza
Operational Headquarters: 14 new cases of COVID-19 infected in Abkhazia and the first infected from among vacationers
A new reading of Sukhum: projects of “Ҳара ҳақалақь” to transform the capital of Abkhazia