The Day of culture of the people of Abaza and the Day of the State Flag of Abkhazia were celebrated on July 23 in Cherkessk.  The holiday was organized by the Association for the Development of the Abaza-Abkhaz ethnos “Alashara” together with the World Abaza Congress and was held in one of the largest parks in southern Russia “Green Island”. 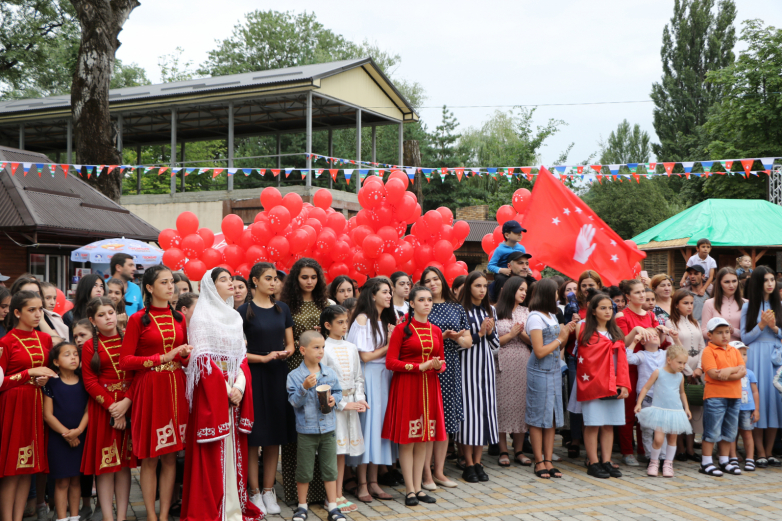 The event became part of the annual cultural and sports festival “Abaza”.

After the completion of the VI Games of the Abaza people, various pavilions with a variety of topics were located in the “Green Island”.  Thus, the attention of visitors to the park was immediately attracted by a life-size model of an Abaza traditional dwelling with utensils. 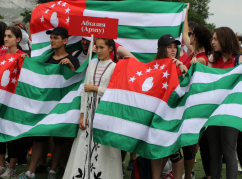 Guests were offered dishes of national cuisine.  Having tasted the dishes, everyone noted their exceptional freshness, naturalness and excellent taste.  There was a lot of music at the celebration.  Old Abaza tunes did not leave anyone indifferent: both “old and young” started dancing.

It was especially crowded at the stands with historical materials about the Abaza people, objects of decorative and applied art and at the WAC stand, where everyone could join the Congress by filling out a simple questionnaire.

The solemn ceremony began with the fact that the Abkhaz flag was brought to the site. Representatives of government bodies, public organizations, foreign diasporas, cultural figures addressed the audience with welcoming words and wishes.  All noted a high level of organization of the holiday. 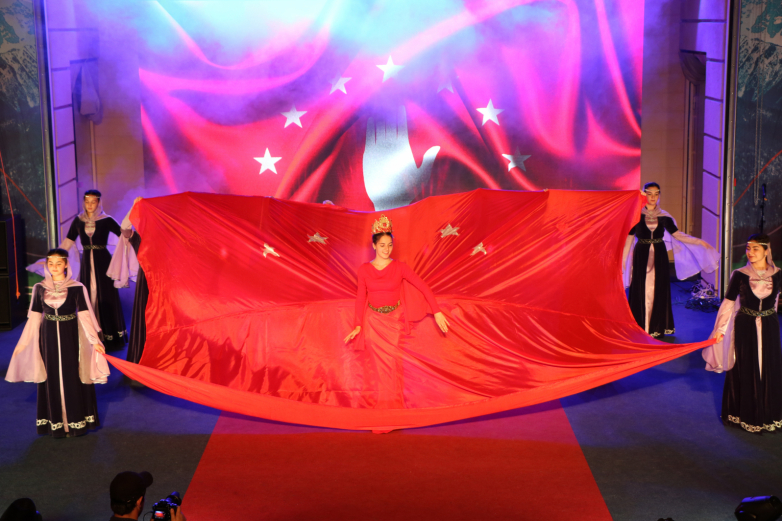 Ramazan Mkhtse, vice-president of the “Alashara” autonomous non-profit organization, said that “tremendous work has been done” and this is “the success of a huge number of people”: representatives of government bodies, the public, volunteers, just caring people.

“In 2014, with the assistance of the specialist of the Ministry of Nationalities of the KChR, Lyudmila Aysanova, we held a festival at the republican level, and subsequently were able to win a grant for state support of our project aimed at harmonizing interethnic relations.  Not so much time has passed since then, and we are witnesses of the now international sports and cultural festival capable of uniting all the representatives of the Abaza people,” said Mkhtse.

The head of the staff of the Chairman of the Supreme Council of the WAC, Kan Tania, noted the importance of the fact that the Day of the National Flag of the Republic of Abkhazia and the Day of the Culture of the People of Abaza are celebrated on the same day - this decision was made by the organizers.

“This undoubtedly contributes to an even closer rapprochement between our people and representatives of the foreign diaspora living in more than 50 countries of the world,” said Tania.

He stressed that it is important to remember: “many sons and daughters of Abkhazia laid down their lives” in order to preserve the state flag as a symbol of a common history, the formation and development of statehood,

“We have no right to forget this.  May this day become a symbol of enthusiasm and unification, a good tradition of bringing all of us together,” Kan Tania concluded.

Despite the drizzling rain, the holiday was gaining momentum.  People interested rushed to the exhibits.

“I have been participating in the festival for several years now and am very happy that the Abaza now have such a unique opportunity for meetings and cultural exchange,” he shared.

Most of the male half of the visitors were enchanted by the table with exhibits of very fine work knives with magnificent inlays.  As it turned out, the master of metal, wood and leather Zurab Takushinov was for the first time at the festival.

“These are my Abaza knives,” says Zurab, enthusiastically telling me that the products are made using ethnic decoration techniques. 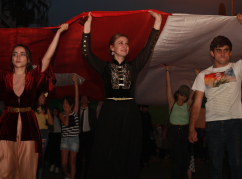 He comes from the village of Staro-Kuvinsk, lived for a long time far beyond the borders of his small homeland, and returned five years ago.  For over 20 years, making knives was his hobby, and now he is actively implementing his work via the Internet.  Takushinov - one of the first modern masters of this business.  He is very proud that he was already able to prepare students - Zurab Zhuzhuev and Murat Gedugov, which is important for preserving the unique craft of the Abaza.

The teacher of the Palace of Children's Art named after Yuri Gagarin of the city of Cherkessk Zhanna Sheremetova participates in the festival for the second time.  She willingly demonstrates the unique works of her wards: weaving, embroidery, appliqués.  The master has been teaching arts and crafts to children for 33 years and considers it very important to organize such sites for talented young people.  The teacher shared, in particular, the success of her student Samira Karmova, the winner of several prestigious competitions in weaving skills.

The extensive program of the festival allowed participants and guests to diversify their leisure time.  A great interest was aroused by a competition of talents and national costumes in five nominations, in which more than 20 contestants participated - representatives of different nationalities of the Karachay-Cherkess Republic.

HOW THE FLAG DAY WAS CELEBRATED IN ABKHAZIA.  PHOTOBLOG >> 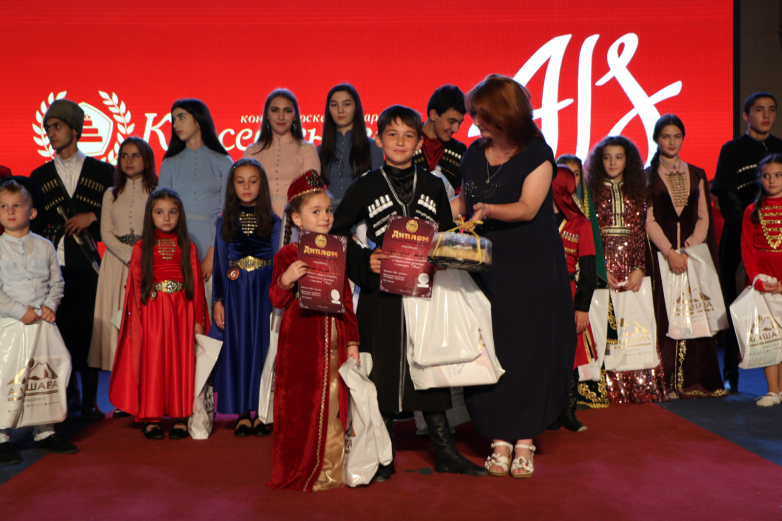 In the evening, the amphitheater of the park gathered more than 1,000 people for a concert of Abaza-Abkhaz song and dance with the participation of folk groups.  The special guests of the concert were Saida Azizova (participant of the Orpheus vocal competition and winner of the WAC special prize for the best performance of the song in the Abkhaz language - ed.) and Sania Tania. 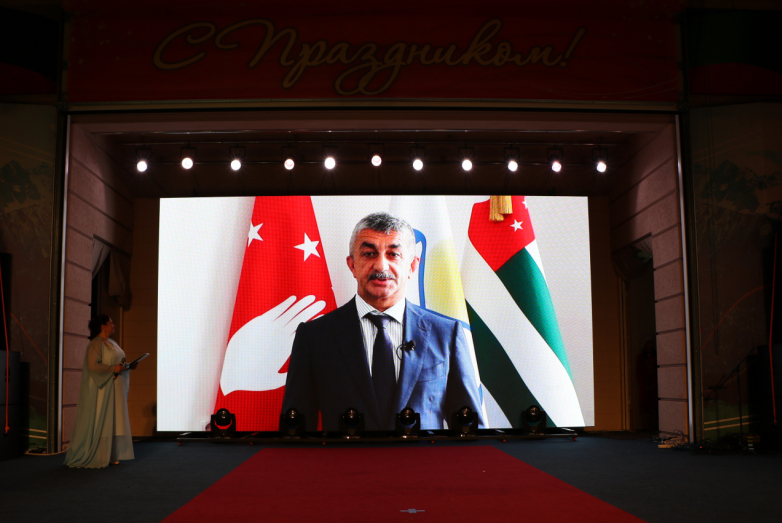 The holiday ended with a traditional firework.  Thousands of fun and truly happy people left in a hope of meeting at the Abaza Culture Day next year.  And many, having acquired new friends at the festival, much earlier.

Cultural and sports festival “Abaza” is held in Cherkessk annually.  Every year the geography of its participants expands, the holiday program becomes more and more diverse and large-scale.