After a long break due to the coronavirus pandemic, the Chairman of the WAC Mussa Ekzekov held a personal meeting with members of the Supreme Council of the Congress.

The Chairman of the Supreme Council of the World Abaza Congress Mussa Ekzekov held a special meeting with members of the WAC SC at the Congress office in Sukhum on Thursday 25 March. The meeting took place as part of Ekzekov's visit to Abkhazia and, for the first time after a period of coronavirus restrictions, took place in person, and not online.

Opening the meeting, the head of the WAC SC noted that, according to the current plan, today local branches of the Congress were to be opened throughout Abkhazia. 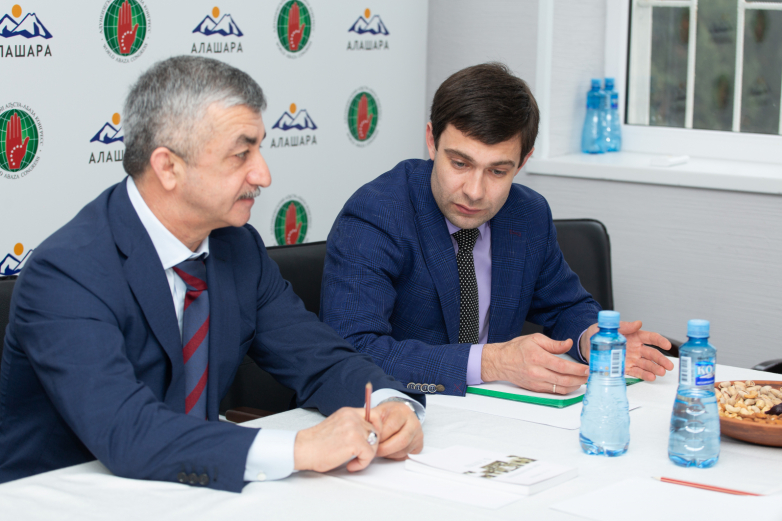 "I expected that today we should have had local branches in all settlements of Abkhazia (in fact, 33 local branches have been opened in Abkhazia - ed.), but life had other plans and suspended our main activities. Now we need to move on with even greater pressure," said Mussa Ekzekov.

He thanked everyone who took an active part in the humanitarian work of the Congress.

"Thanks to everyone who participated in solving the problems during the pandemic - in fact, risking their lives. In Abkhazia, Abazashta and St. Petersburg, when we were not dealing with our direct work, we were engaged in other important humanitarian projects. Despite this, our tasks remain relevant, and we continue to implement them," Ekzekov said.

A member of the Supreme Council, Director of the Center for Strategic Studies Viacheslav Chirikba expressed his enthusiasm for the resumption of the active work of the Congress.

"I am very glad and happy that the work is being resumed fully. Life has made its own adjustments, a year ago no one expected what would happen. I remember when I read that in China, in the city of Wuhan, there was an outbreak of an epidemic, because of which, six months later, we lost many of our outstanding people. It was a tragic and difficult period. Hopefully, the hardest part is over. We have a great desire to fill the gap, we are ready to implement new plans with full dedication," Chirikba noted. 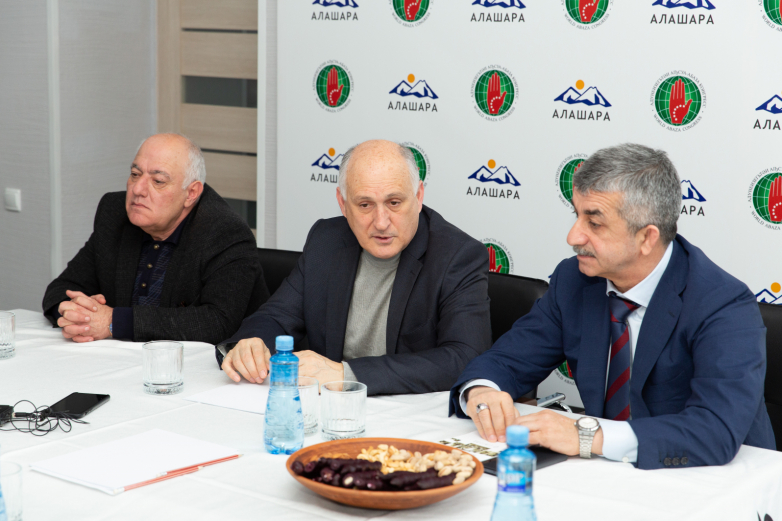 The Minister for Repatriation, a member of the Supreme Council of the WAC Vadim Kharazia made a number of proposals for joint work.

"I am very glad that I am part of the Congress team. Thank you for inviting me to another meeting.  I believe that all of us - the Ministry that I head (Ministry of Repatriation - ed.), the Ministry of Foreign Affairs and the World Abaza Congress - need to choose one common path in matters of repatriation. I would like to propose to jointly develop a common coherent strategy for the repatriation process. Our Ministry is often criticised for the absence of a corresponding state program. Of course, a lot has been done, but, as time has shown, this is not enough. We have common tasks and I would very much like to work together," the Minister said.

The meeting continued with a discussion of such pressing issues as the development of a common Abkhaz-Abaza alphabet and a handbook for children and adults about the moral code of the Abkhazians and Abaza "Apsuara". 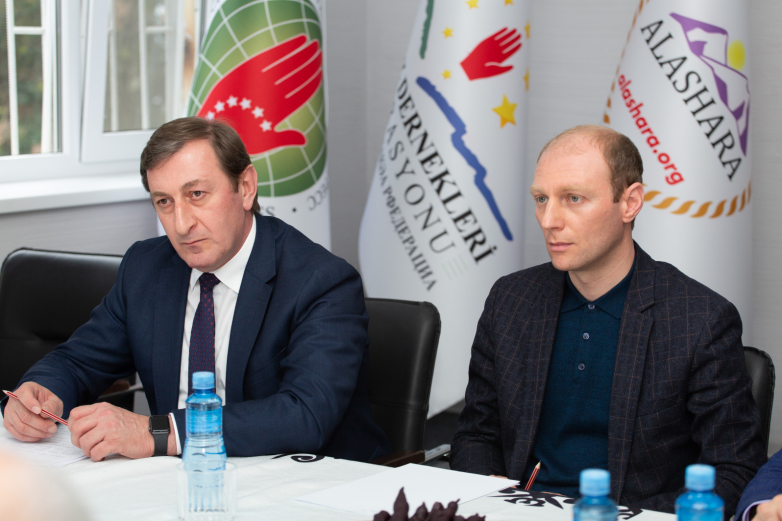 Mussa Ekzekov noted that for three years, under the auspices of the Academy of Sciences of Abkhazia, active work was carried out to create a joint Abkhaz-Abaza alphabet, but this work was not successful. Today, members of the Supreme Council are working on the creation of such an alphabet - Head of the Center for Strategic Studies Viacheslav Chirikba and Vice-Rector for Research of Karachay-Cherkess State University Sergey Pazov.

Viacheslav Chirikba spoke about the difficulties of unifying the two alphabets.

"It is pretty tricky. When we had Latin writing in the 30s, there was, practically one to one, a single alphabet. The division took place later, when Russia switched to the Cyrillic alphabet, and in Abkhazia to the Georgian basis. A division began. The alphabet that was returned to us in 1954 is based on principles opposite to the Abaza alphabet," the scholar said.

Chirikba noted that the main question is which system to take as the basis of the common alphabet - Abkhazian or Abaza, and whether a completely new or hybrid basis for the two alphabets should be developed. 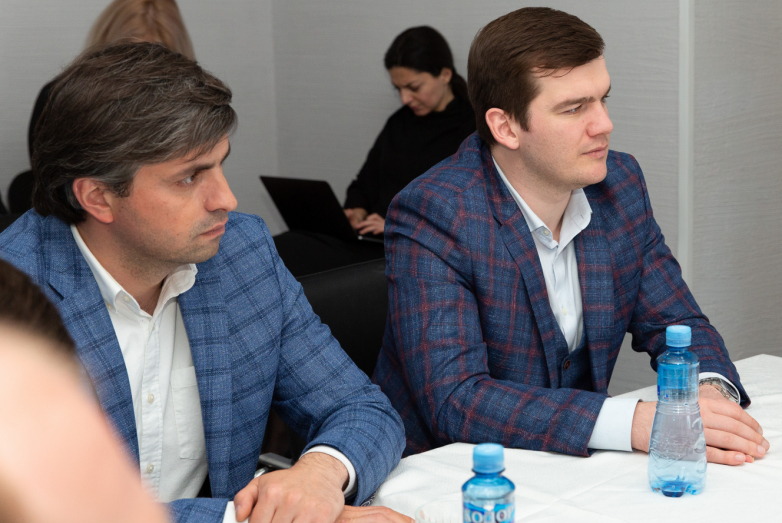 The members of the Supreme Council also discussed the creation of a scientific Abkhaz-Abaza expert council, whose competence would be to review and mark the so-called "quality mark" on all scientific literature about the history of the Abkhaz-Abaza people. 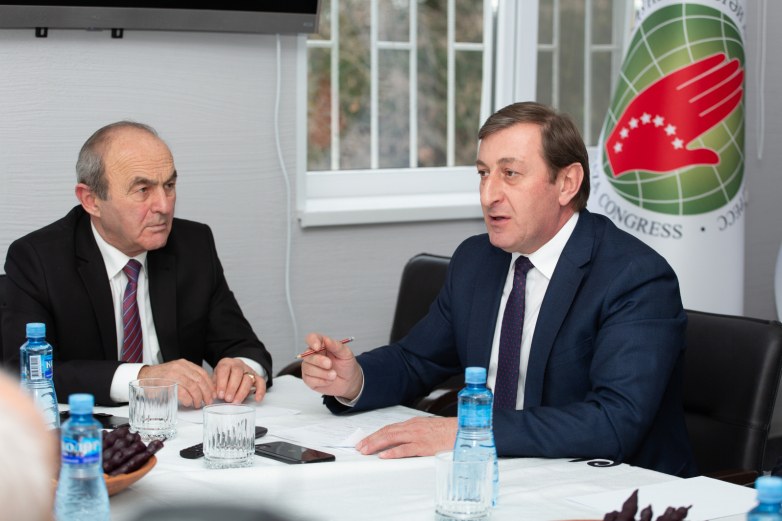 Mussa Ekzekov's working visit to Abkhazia will last until March 27 and will include a number of meetings with members of the Supreme Council of the Congress, as well as with representatives of the local branches of the WAC in villages and districts of Abkhazia.