Real hominy, village cheese and hearth: why one should visit an Abkhaz restaurant in Istanbul

A must-see point for gastronomic tours in Istanbul, a meeting place for representatives of the Caucasian Diaspora, a cozy restaurant with food made from natural products ... For more information about the Abkhaz national restaurant in Turkey, read the WAC report.

The main dish on any Abkhaz table - hominy - in Abkhazia is laid out slides for each guest separately, and in Turkey it is customary to serve on a large common dish, and then cut into portions. So they serve it in the restaurant «Sylashara.»

«The secret of the correct Abkhazian hominy is to slowly pour cornmeal into boiling water and mix it all the time,» Khalyuk Sadzba, an ethnic Abkhazian and a resident of Istanbul and the owner of the only Abkhazian restaurant in the multi-million megapolis, shares the subtleties of culinary art.

Abkhazians in Turkey use yellow corn flour. Khalyuk is sure that this cooking method of making abysta (Abkhazian name of «hominy» - ed.) is the most authentic and ancient. The recipe practically does not differ from that adopted in Abkhazia, only Khalyuk adds some salt to the pot, whereas they don’t add salt in hominy in Abkhazia. 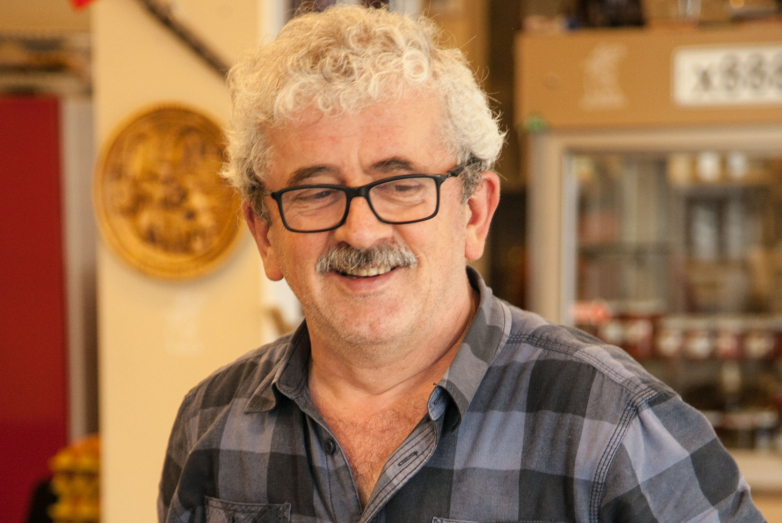 For friends and everyone else

Khalyuk Sadzba and his wife Gyulay Khrachaa are three years in the restaurant business already. Khalyuk is in charge of administrative functions, Gyulay is a chef. A family affair is ran well and brings results: the restaurant is loved by visitors, among whom are Khalyuk’s compatriots and local Turks. It is noteworthy that «Sylashara» (translated from Abkhazian - «my light») was chosen by both Turkish bloggers and guides on the gastronomic routes of Istanbul. Both those and others here are frequent guests. Abkhazian hominy, bean gravy akud and akuteitsarsh - chicken in peanut sauce - diversified the gastronomic menu of the city and became its new landmark. 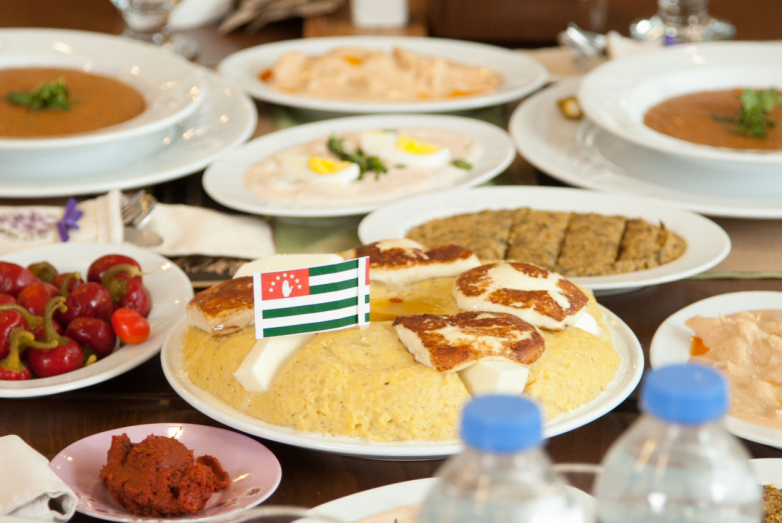 And yet, most of all, the owner of the restaurant is pleased with the fact that «Sylashara» has become a meeting place for Abkhazians, Abazins and Adygs from all over Istanbul and its suburbs. Here they meet, hold family celebrations. Guests from Abkhazia, arriving in Istanbul, consider it their duty to visit a restaurant and get acquainted with its owners. The Abkhazian cuisine also attracted those ethnic Abkhaz who have not yet been included in the activities of the Federation of Abkhaz Cultural Centers. Many of them, having learned about a cozy place where they can order favorite dishes from childhood, come to Khalyuk and for the first time get acquainted with their compatriots.

The «Sylashara» restaurant is small but cozy, it is located in one of the districts in the Asian part of Istanbul. Abkhazian motifs are entirely in the interior, herbs and spices are dried over the open kitchen, in the showcase of their own cooking. Khalyuk says that all the products in his restaurant are natural and environmentally friendly, and he brings them from nearby Abkhaz villages.

«When the ingredients are grown in the village, then the taste of the food is different. For me it is fundamentally important. I have never bought products in local stores, although there are a lot of them here, and everything is close by. I prefer to go to the villages where our Abkhazians make cheese themselves at home, grow corn and chickens,» says Khalyuk.

Khalyuk Sadzba speaks perfect Abkhaz and visits Abkhazia from time to time, follows the news from the historical homeland, he is an active activist of the Abkhaz Diaspora in Turkey.

No celebration or meeting of honored guests in the Abkhaz cultural center of Istanbul is complete without his participation and without his refreshments.

Female role of the «soul of the restaurant»

If Khalyuk is the brain of «Sylashara», then his spouse is undoubtedly the soul of the restaurant. Gyulay learned to cook Abkhazian dishes from her mother, and she from hers. Thus, the recipe was passed from generation to generation and, importantly, has not lost its authenticity.

The dishes of Gyulay do not differ in taste and way of cooking from those prepared by hostesses in Abkhazia. But the serving sometimes varies. We have already mentioned the Turkish way of serving hominy. Another traditional dish, akud, was eaten chilled until recently, but numerous guests from Abkhazia who visit the restaurant «Sylashara» taught the owners to serve it a hot way: the way they do it at home. 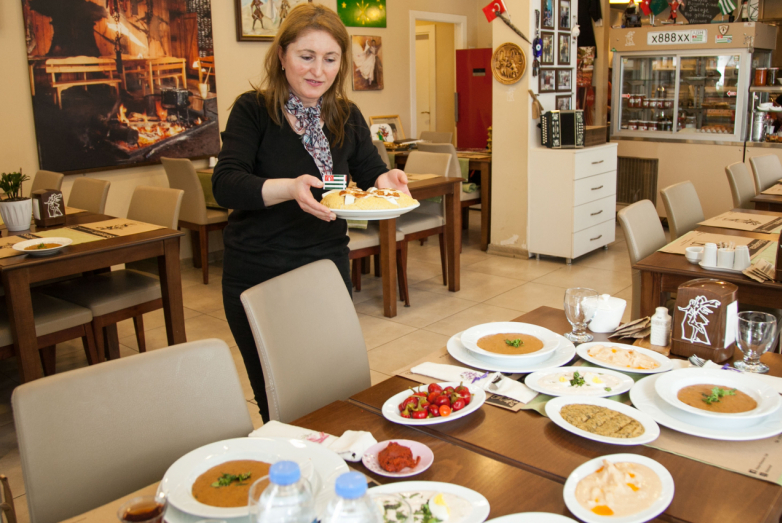 Khalyuk claims that he does not spend money on advertising: this is not required. Visitors - as a rule, are regular customers. For them, this place is not just an institution where tasty food is served, but a connection with home and native culture, the «island of Abkhazia» in multi-million and noisy Istanbul.

Khalyuk's plans are to build an apatskha (traditional wicker dwelling of Abkhazians - ed.) with a hearth and open fire. A wicker apatskha perfectly conveys the flavor of Abkhaz culture and Abkhaz national cuisine, Khalyuk is confident. He dreams that his apatskha, where national dishes will be served, will be a gift for the entire Abkhaz-Abaza Diaspora in Turkey. 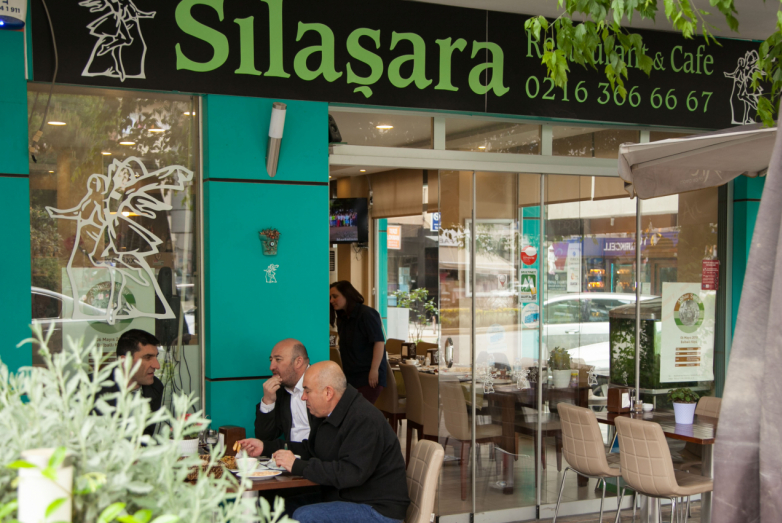 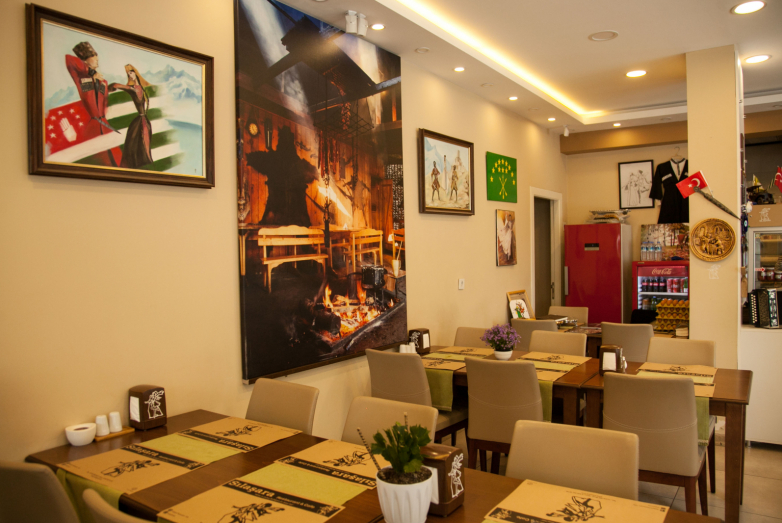 Interior of the restaurant «Sylashara»
© WAC/Naala Avidzba
Diaspora Turkish
To leave a comment you need
to login or register.
Share
No comments