The opening of the regional branch of the WAC in Germany concluded the December working visit of the Congress delegation to Western Europe, where representatives of the Abkhaz-Abaza Diaspora live.

The regional branch of the World Abaza Congress has now been created in Germany: it has been opened on behalf of the Chairman of the Supreme Council of the WAC Mussa Ekzekov as part of the working visit of the Congress delegation to the countries of the European Union, which ended on December 16.  The delegation included the Executive Secretary of the WAC Inar Gitsba, member of the Supreme Council Viacheslav Chirikba and the head of the Web Information portal Amina Lazba. 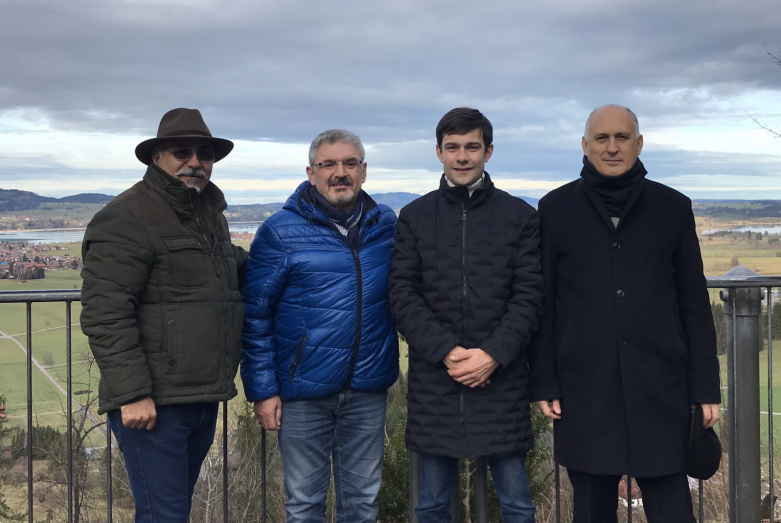 Erkan Khadzhimba, a member of the WAC Supreme Council, who lives in Munich, along with other participants, attended the meeting with compatriots organized by the WAC. He called the event “useful and timely.”

“The Abkhaz public of Germany was literally hungry for similar meetings that are related to our historical Motherland: over the years, there has been a decline in cultural activity. The more representatives of the Congress communicated with those present, the more the latter were revealed and imbued with the organization’s ideas, and by the end of the meeting all participants came to complete unity,” a member of the Supreme Council of the WAC shared his impressions.

He believes that the delegation’s performance in the Abkhaz language aroused special emotions in the audience. 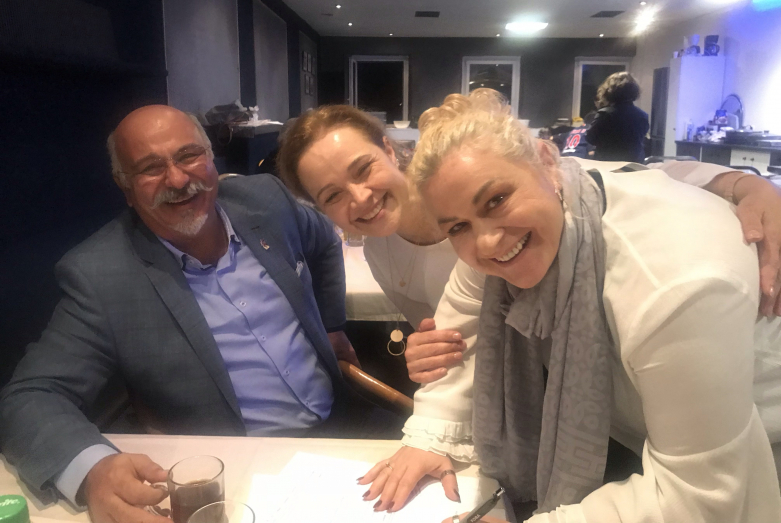 “Native speech made the younger generation think about the need to learn the language for a better understanding of each other. They are seriously worried that they cannot understand and speak their language at the proper level,” said Erkan Khadzhimba, recalling that the need to open language courses was discussed at the meeting. 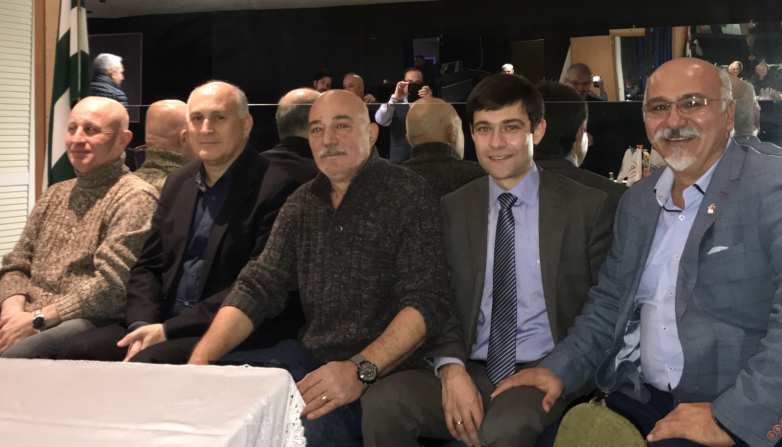 The member of the Supreme Council of the WAC also said that after the meeting he received many calls from those who could not attend in person.

“They asked when such a meeting would take place again and assured us that they would definitely be at the next one. As for the participants in the meeting, many of them have not yet visited their historic homeland, and this event strengthened their desire to visit it. I can imagine what feelings a visit to Abkhazia will cause, considering how everyone was inspired after the meeting,” he concluded.

The Abkhaz Dernek in Moosburg has been headed by Sezai Chkok for four years. He has been living in Germany since 1971. It was the head of the cultural center who organized a meeting with compatriots, where his wife Sibel Patkhhvaria and children Efe Sinan and Defne Chkok were also present. Spouses were included in the asset of the created regional branch of the WAC.

“We are very pleased to welcome compatriots from Abkhazia in Germany. We try to meet regularly with families within the walls of the Dernek, where both we and our children have the opportunity to communicate with each other, keep in touch and feel like one big family. I am sure that through interaction with the Congress we will be able not only to preserve our national identity in a foreign land, but also to participate more actively in the lives of brothers and sisters in our historical Motherland. I wish prosperity to our people, peaceful heaven and God's grace,” Chkok said on behalf of his family and the whole Dernek.

Tayfun Pachulia was elected the head of the newly created regional branch of the WAC. He expressed his readiness to work for the benefit of the prosperity of the historical Motherland and the Abkhaz people.

“Today there is already an opportunity to do useful things for our society together, helping each other. We are always with you (with the entire Congress - ed.) in the implementation of joint projects. We really look forward to meeting soon,” said the newly elected head of the regional branch. 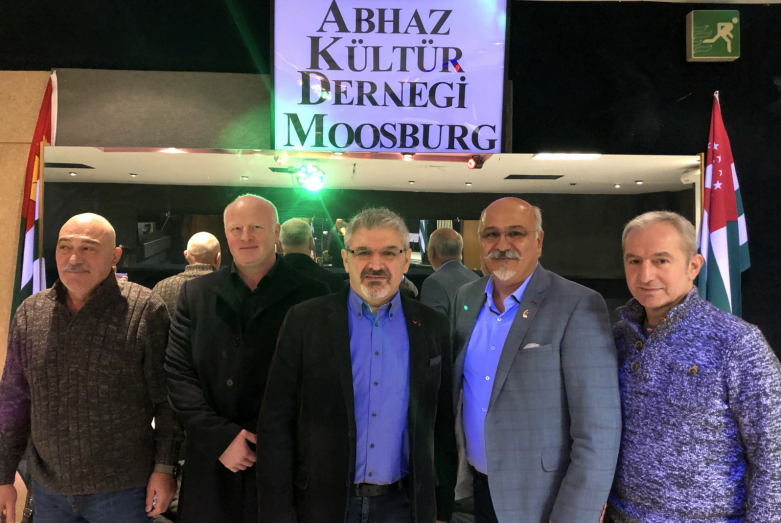 Dernek women met guests from Abkhazia with dishes of national cuisine. One of the active participants in the meeting, Aishe Abdipa, was born and raised in Germany, where her parents Ziatti Abdipa and Guler Tukipa once moved from the Turkish village of Akiazi. Aishe regularly visits the Abkhaz Dernek.

“I learned how to cook traditional dishes with my mother, and already here in Germany we regularly eat such dishes as abysta (hominy), akutysyzbal (chicken with peanut sauce), ahulchapa and much more in our family. Often, the women of our community at large festivals help men cook a sacrificial animal. In our Dernek, I learned to dance national dances. Unfortunately, I have not been able to learn the language yet, despite the fact that our parents speak it,” Abdipa noted with regret.

She added that she has been participating in the life of the Dernek for all 27 years from the day it was founded.

“Parents made a great contribution to our national identity, but the Dernek played a big role in this. We can say that we grew up here. Now our task is to pass this baton to the younger ones. It is important to meet, communicate with each other and keep in touch with the historical homeland,” the young woman is sure.

Muhammad Al-Sharif is half Arab and his father is from Mecca. His grandmother from the side of the father is from the Abkhaz family Dziguta, mother is also an Abkhaz from the Humsachipa family. Despite his Arab roots, Mohammed speaks Abkhaz well: his grandmother and mother taught him. His wife is also an Abkhaz woman belonging to the princely family of Eshba from the village of Haji Suleimanbey in the Turkish region of Duzce.

“I am very pleased to meet with compatriots from Abkhazia. We have been waiting for this for a long time. We hope that engagement with Congress will bear fruit very soon. I really want to visit Abkhazia with my family,” Mohammed Al-Sharif shared his dream. 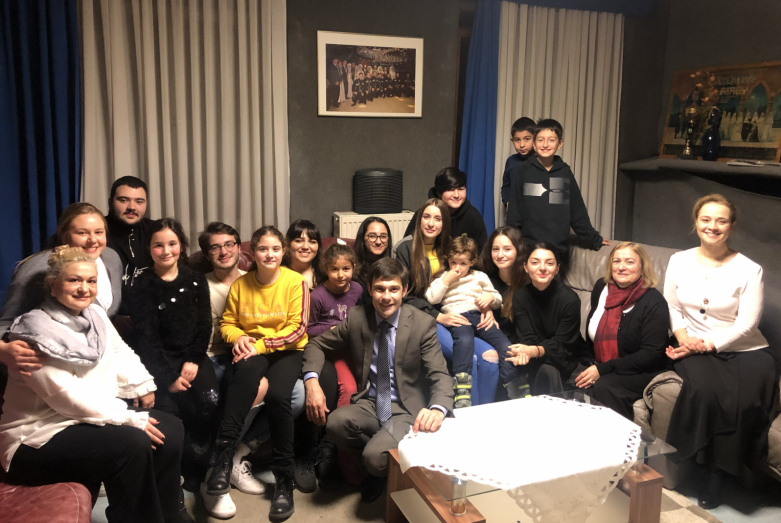 All participants of the event who have reached the age of 18 have completed the application form for membership in the World Abaza Congress. The meeting ended with a big feast, folk dances and songs.

Meetings with compatriots in Western Europe and the opening of regional offices in these countries are held according to the plan of the WAC as part of its international activities for 2019. The newly created regional branch of the WAC in Germany was the fourth in Europe after the branches in the UK, the Netherlands and the Kingdom of Belgium