Three sports horizontal bars were installed in different parts of the Abkhaz town of Gudauta by members of the recently created council of the local branch of the WAC.

The head of the council, Amra Lakoya, said that the idea of ​​the project appeared on the very first day of the formation of the local council on October 3 of the current year - it was proposed by one of the team members, athlete Almaskhan Dzhenia. The proposal was supported by all members of the Council, and the very next day work began on the project.

“Friends and acquaintances who responded to posts on social networks helped to implement the project, and within four days money was collected. I want to note that not only residents of  Gudauta took part in the collection of money, this, in my opinion, is important. Frankly, the guys [at the beginning] set a goal to install two horizontal bars within a ten-day period, but thanks to fundraising in the shortest possible time and in a larger amount, we managed to acquire and install even three horizontal bars.Special thanks to everyone who took part in the installation of the workout grounds: Max Bagaturia, Danil Adzhba, Danil Gabniya, Adam Tsveiba, Adam Gartskiya, Paramon Enik, John Paptsava, Pilia Enri and Milana Gulia,” shared Lakoya.

She said that installed horizontal bars are a kind of sports equipment for street fitness, known as workout. Such a horizontal bar allows you to perform more than 25 different physical exercises, thanks to which you can train all the main muscles of the body to be in good shape. Now everyone in Gudauta has the opportunity to exercise outdoors for free.

Commenting on the work of the council of the local branch of the WAC in Gudauta as a whole, Amra Lakoya expressed the opinion that the council should work to a greater extent on the implementation of socially oriented projects.

“I consider the main goal of the council of the local branch of the Congress to promote the social activity of citizens. This is the preparation and conduct of cultural, sports and other events that contribute to the development of the language, culture and traditions of the Abkhaz-Abaza people,” said the head of the council.

The Chief of Staff of the Supreme Council of the WAC Kan Taniya, in turn, also emphasized that the first project of the local branch of the WAC in Gudauta was implemented only 10 days after the creation of the council.

“The Council of the local branch of the WAC in the hero town of Gudauta is a vivid example of the successful and effective application of the principle of work of the Congress on the ground. We thank everyone who took an active part in collecting the necessary financial resources for the implementation of the project and, in particular, the members of the local branch themselves for showing in practice that together we can do a lot,” said Taniya.

He said that the councils of the local branches of the Congress are formed mainly on the basis of the desire to implement, together with the WAC team, socially-oriented, socially useful projects that “would increase the level of comfort of living in a particular locality.”

“So, through acquaintances and friends, we find active people and together solve issues that are of interest primarily to the residents of the locality themselves. The implementation of ideas and projects is facilitated by the motivation of residents and the great potential of the human resource represented by a wide network of members of the Congress in the places of residence of the Abkhaz-Abaza people,” Kan Taniya explained. 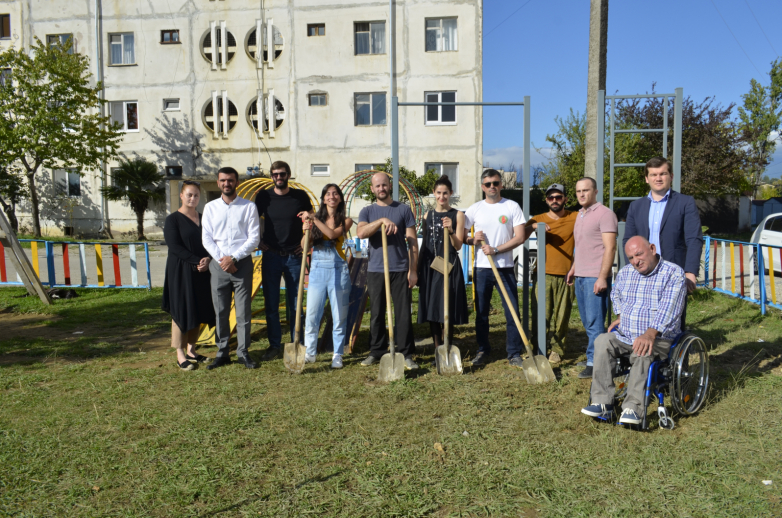 The local residents were the ones who were happy with the horizontal bars most of all.

“Workouts have long been popular all over the world. I am very glad that now they are in our beloved town. We will come here and bring children. This is a great project for the town,” said the local resident Zulia Bargandzhia.

The Council of the local branch of the World Abaza Congress in Gudauta was formed on October 3, 2019.

Its asset is constituted by the head Amra Lakoya and members of the Council: Inal Ankvab, Almaskhan Dzhenia and Khamida Gitsba.