60 years of guarding the interests of the people: Moscow Abkhazian Diaspora celebrated its jubilee

The jubilee sixtieth meeting of the Moscow Abkhazian Diaspora (MAD) was held in Moscow on March 25. The first community was created in Moscow at the end of the XIX century, but the official countdown of the Diaspora has been taking place since 1958. 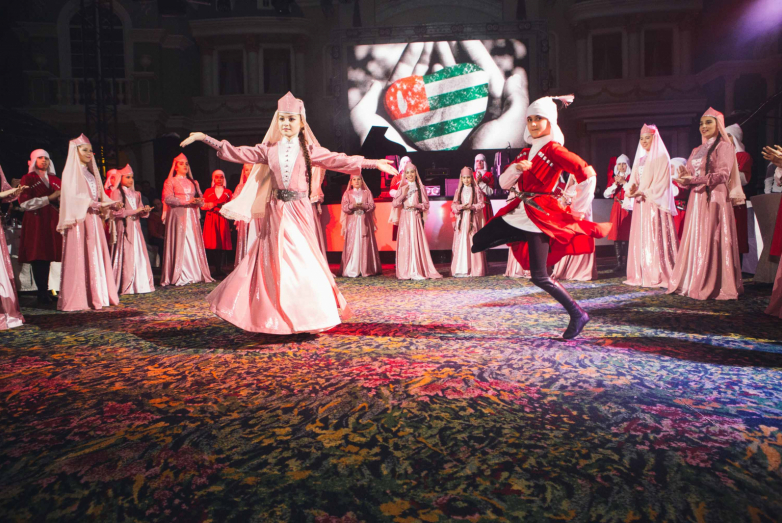 The tradition to gather for the so-called "Abkhazian evenings" proved to be successful and in demand. It is a format that unites compatriots in a relaxed and, at the same time, solemn atmosphere that facilitates pleasant acquaintance, communication, exchange of information and ideas. The anniversary meeting was an exception.

The solemnity was entrusted to be opened to the person whose name is forever inscribed in the history of the Diaspora - Taras Mironovich Shamba, the first head of the Abkhazian community in Moscow.

"People's President of Abkhazia" - this is how unofficially Taras Shamba is called in his homeland - came not with empty hands.

"I carefully prepared for today's meeting," said Taras Mironovich, and handed the medal "To the Best Chief" on his own behalf to the current head of the MAD Beslan Agrba, wishing him "to live a beautiful and decent life." 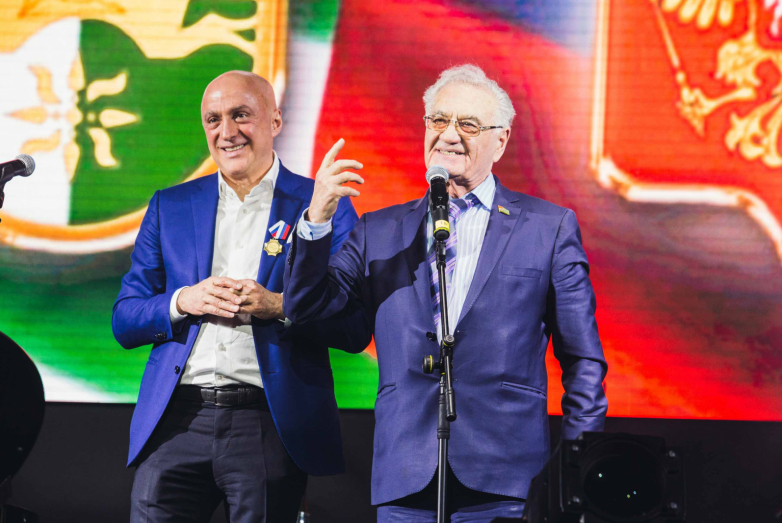 Shamba remembered the first years of the work of the community, how his representatives at that time already tried so that nothing that relates to the people "was not wasted."

"When I was a student, I was told that Nestor Lakoba in the early 20-ies of the XX century in Moscow, gathered countrymen. So I thought: why do not we create such an organization? This is how it all began," Shamba said.

Traditionally, during the March meetings the Diaspora invites compatriots and friends of Abkhazia from different countries, politicians and cultural figures of Russia and abroad. This year, the host of the celebration, head of the MAD Beslan Agrba, invited Mussa Ekzekov, Chairman of the Supreme council of the World Abaza Congress (WAC), to the holiday.

"Abazins and Abkhazians are two wings of one people, and we should be together. The goal - to unite the people and to achieve that our country became free and independent - is achieved. We passed the baton to the hands of Mussa Khabalevich Ekzekov," Shamba said, and handed Mussa Ekzekov a medal "To the Dearest Man." Ekzekov, in turn, thanked all those present and wished the MAD further prosperity, expressing confidence that the Diaspora in Moscow "will achieve tremendous success".

Together with Mussa Ekzekov, the Chairman of the Federation of Abkhazian Cultural Centers in Turkey, Atanur Akusba, attended the meeting.

Representatives of the Abkhaz communities adopted a joint address in which they expressed their readiness to unite their efforts for the development and prosperity of Abkhazia, and also called on members of all Abkhaz Diasporas to unite in the name of further victories in the economy, culture, sport and politics. 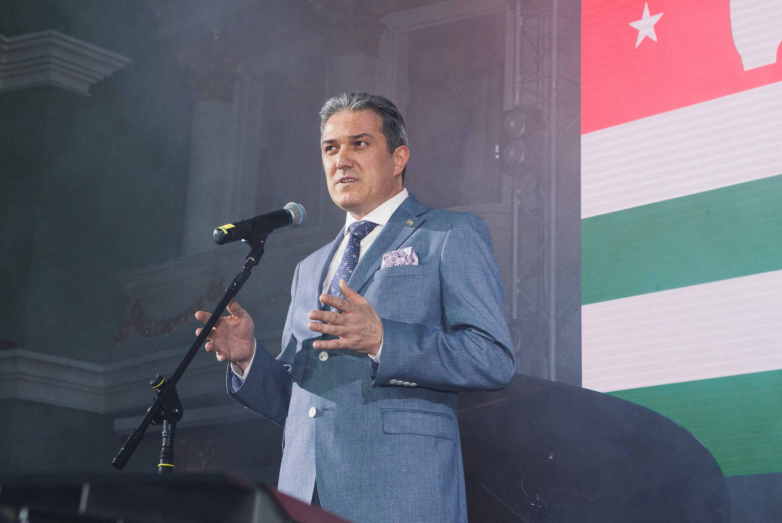 A guest of the 60th anniversary of the MAD was the Chairman of the Federation of Abkhazian Cultural Centers in Turkey, Atanur Akusba.
© Moscow Abkhazian Diaspora

According to the tradition, musicians and artists from among the Diaspora performed at the MAD meetings. This year, the audience was lucky to hear the famous opera diva Khibla Gerzmava – world star. The singer is always happy to participate in Diaspora events. Odyssey Adzhindzhal, Saida Agrba, Tamara Voronova and young dancers of "Amtsabz" ensemble created by the forces of the Diaspora also decorated the evening with their performances. 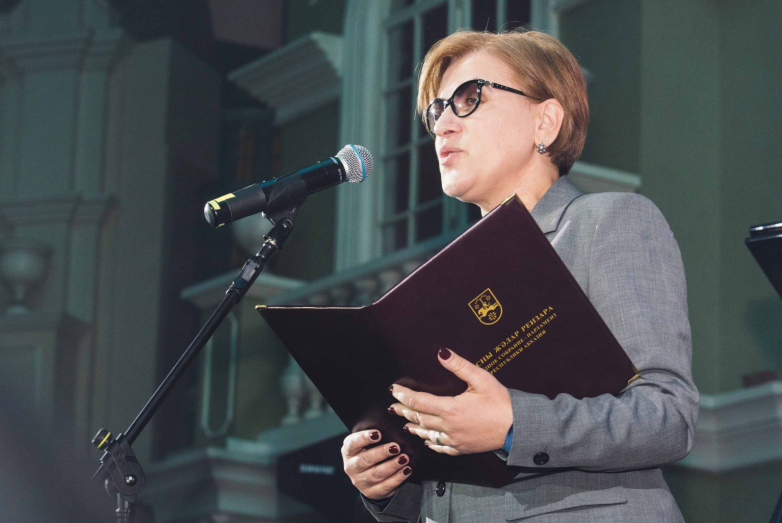 The delegation of the People's Assembly - the Parliament of Abkhazia arrived in Moscow to celebrate the 60th anniversary of the MAD.
© Moscow Abkhazian Diaspora 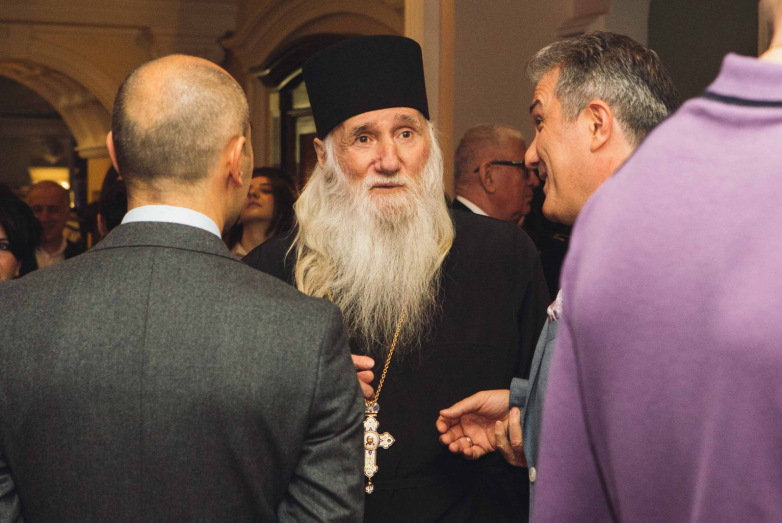 Chairman of the Church Council of the Abkhazian Orthodox Church, Priest Vissarion Aplia participated in the celebrations in honor of the 60th anniversary of the MAD.
© Moscow Abkhazian Diaspora Scholar of the “Amshra” charitable foundation, young ballerina Kristina Chkotua performed at the 60th jubilee meeting of the MAD. Thanks to the support of the foundation, Christina studies at the Agrippina Vaganova Russian Ballet Academy.
© Moscow Abkhazian Diaspora

United by the idea

The MAD team today is about energetic enthusiasts, who are very good at creating and maintaining a positive image of the Abkhazian Diaspora and Abkhazia as a whole. Today, the Diaspora is developing many projects involving not only members of the MAD, but also compatriots from Abkhazia.

For example, the intellectual game "What? Where? When?" went beyond the MAD, and now it is actively involving teams from Abkhazia, coming to Moscow with the support of the MAD. Intellectual game "What? Where? When?"
© Moscow Abkhazian Diaspora 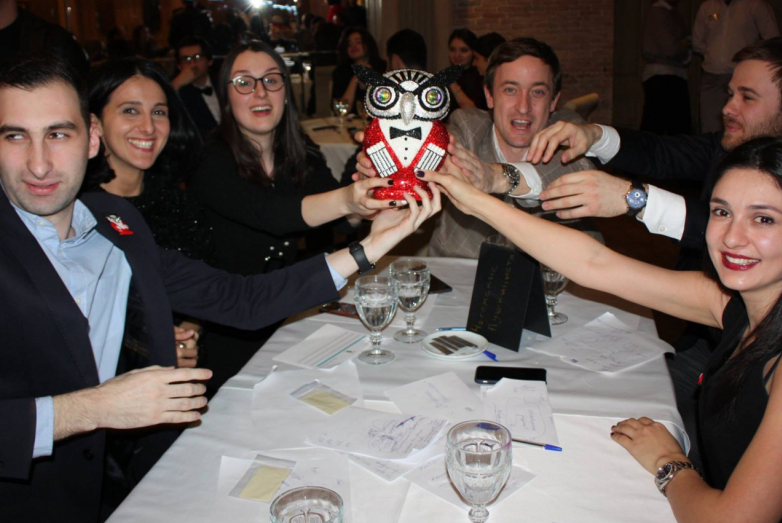 Intellectual game "What? Where? When?"
© Moscow Abkhazian Diaspora

Every year the Moscow Diaspora holds celebratory events on the occasion of the Victory Day in the Patriotic War of the Abkhazian people of 1992-1993.

Meetings with first-year students of Moscow universities, who came to study from Abkhazia, became traditional. These meetings are necessary to make it clear to young people: they are not alone in the megapolis and can count on the full support of the Diaspora. A new significant project was the financing of the economic program "25 Steps for the Development of Abkhazia until 2025". The program was developed by the consulting company Strategy Partners Group and presented in June 2018 in Abkhazia. The MAD leadership took an active part in developing the program along with specialists. This is the contribution of the Diaspora to the development of a national strategy with a view to an early transition to the realization of the tasks of the economic development of Abkhazia. 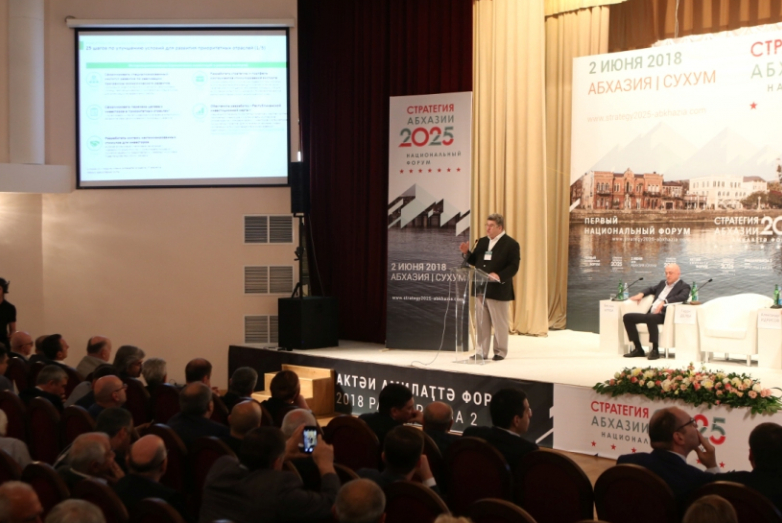 From the history of the Diaspora

Many decades ago, however, as today, the most numerous Abkhaz Diaspora in Russia resided in the cities of Moscow and St. Petersburg. In the 20-30s of the XX century it was in Moscow, the capital of the Soviet Union, the most active influx of people from Abkhazia was observed.

It is known that the First Secretary of the Central Committee of the Abkhaz ASSR, the legendary leader of the Abkhazian people Nestor Apollonovich Lakoba, during his frequent visits to Moscow gathered compatriots, discussed with them their problems, and tried to help solve these or other problems. The meetings were both formal and informal. On the so-called "Abkhazian evenings" Nestor brought his friends-Muscovites. Especially famous was the evening, where Lyubov Orlova, with whom Lakoba was friends, came to sing her songs.

At the initiative of Nestor Apollonovich at that time, natives from Abkhazia were granted quotas in universities. More than 150 students were trained at various universities in the capital.
In those years, the first unofficial Abkhazian community was born in Moscow. It was destined to survive a terrible historical period, marked by the murder of Lakoba and mass repressions of members of the Diaspora. The idea of national autonomy, which always lived in the hearts of Abkhazians, wherever they were, again proved to be unattainable.

In the 50-ies of the twentieth century, the practice of allocating quotas for studies in universities for immigrants from Abkhazia is reviving, and, as a result, the community of Abkhazian students re-appears. At the root of the revival of the community was the Abkhazian and Russian socio-political figure, the first president of the World Association of the Abkhaz-Abaza people (now WAC) Taras Mironovich Shamba. March 4 was chosen as the fixed date for the meetings of the Abkhazian community.

According to the memoirs of Taras Shamba, in those years he was supported by such representatives of the Abkhazian people as Fatima Ashkharua, Svetlana Shamba, Harry Kondzharia, Vladimir Khishba.

The number of students gradually replenished, which brought a fresh stream to the activities of the community. Thus, according to Taras Shamba's recollections, with the entry into the Moscow Literary Institute of the aspiring writers Alexei Gogua and Vladimir Ankvab in the late 1950s, monthly meetings of fellow countrymen began to be held in the hostel of the Literary Institute. Later they were replaced by future writers, and then students, Mushni Lasuria and Dzhuma Akhuba.

It is believed that it was in 1958 that the Abkhazian community in Moscow kick-started, which has since never ceased to operate, although it was called in different ways. 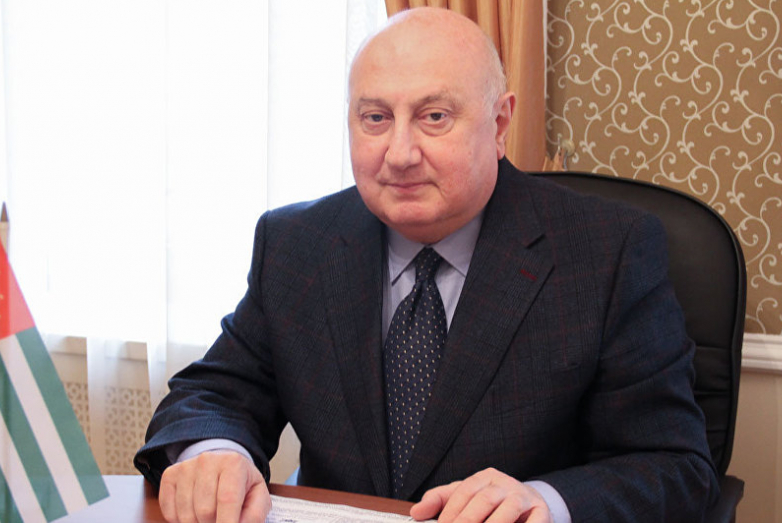 So, in December 1989, the Moscow Society of Abkhaz Culture "Nartaa" appeared in Moscow. The current Ambassador Extraordinary and Plenipotentiary of Abkhazia to Russia, Igor Akhba became its chairman and Yuri Anchabadze its deputy. Among the founders of the society were Taras Shamba, director Nelly Eshba, writer Fazil Iskander, as well as friends of Abkhazia Bella Akhmadulina, Andrei Bitov, Rimma Kazakova, Boris Messerer. The society was engaged in various activities, from the publication of the printed "Alashara" bulletin to the organization of the first Abkhaz language and literature school in Moscow, the director and teacher of which was Irina Basariya. But one thing was unchanged: the idea of autonomy never ceased to disturb the minds of Abkhazians, in particular, members of the Moscow community. The main mission of the society "Nartaa" was the propaganda work outside the homeland. This activity became part of the great struggle that Abkhazia led at the time with the first president Vladislav Ardzinba.

The well-coordinated work of the Abkhaz Diaspora in Moscow during the years of the Patriotic War of the people of Abkhazia in 1992-1993 was a great help for the belligerent Abkhazia. Work at the headquarters was conducted 24 hours a day: members of the Diaspora collected money, sent weapons and products to their homeland, met refugees, sent wounded to hospitals, fought the information war. The house of the famous public figure and writer Georgy Gulia became the place of secret negotiations and meetings between Vladislav Ardzinba and the leaders of the Russian government.

The war played a unifying role in the life of the community, bringing the Diaspora and homeland as close as possible.

In 2011 the Regional Public Organization "Moscow Abkhaz Diaspora" (MAD) was legally registered. The organization was headed by a businessman and philanthropist Beslan Rodionovich Agrba. 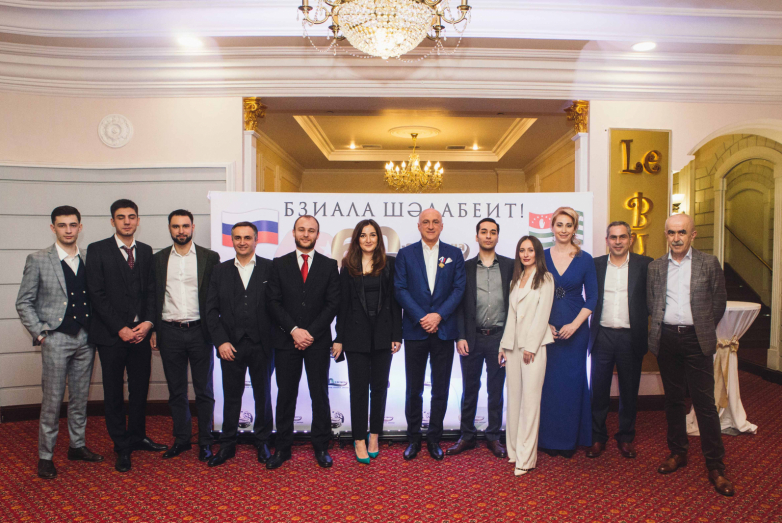 A small part of the MAD team is about smart, energetic, purposeful people.
© Moscow Abkhazian Diaspora