A huge ethno park "Apsny Park" opened in Abkhazia: its area is 10 hectares.

The ethno park "Apsny Park", located near the village of Mgudzirkhva in the Gudauta region on an area of 10 hectares, was opened in Abkhazia.

The park contains objects of ethnography and samples of national architecture, inscribed in the landscape environment. Folk crafts are also represented here, centers of applied arts have been opened, and all this is combined with museum, exhibition, and entertainment venues.

This is atalky (аталкы) - a device for rawhide processing, from which, among other things, Abkhazian акамчы were made (riders' whip - ed.). This inventory was given to the ethno park by the master from Pakuash.
© WAC / Ilona Khvartskiya
These are traditional Abkhazian stilts, with the help of which Abkhazian children learned to walk. By the way, modern families also often use such stilts.
© WAC / Ilona Khvartskiya

The author of the idea, Mzauch Piliya, said that one of the main tasks of the project is to show clearly how an Abkhazian person once existed harmoniously surrounded by nature.

"This is a national project that promotes the national language, culture and way of life. We want to show our children, among other things, that Abkhazians have a rich history," he explained.

Piliya said that the first beginnings of such an idea came to him in childhood. According to him, work on the creation of the park has been going on for several years.

"Our history is much richer than what we are able to reflect today. We must jointly tell about it. We want to make a single national project that would unite society, culture, history, science," he said.

In the museum of the park you can see traditional men's and women's clothing, made according to the drawings of Elena Labakhua - press secretary of the Central Election Commission of Abkhazia. As it turned out, she has long been fond of creating original Abkhazian clothing according to the old method, and she makes many elements of exhibition costumes. Among other things, her work is a bridal women's suit of an unusual color for our days - black.
© WAC / Ilona Khvartskiya
A huge ethno park "Apsny Park" opened in Abkhazia: its area is 10 hectares.
© WAC / Ilona Khvartskiya

The author of the idea noted that the "Apsny Park" project opens up an opportunity for Abkhazia to offer the guests of the country a new type of tourist services - cultural and educational tourism.

"Such a complex currently has no analogues; it differs not only by the uniqueness of the objects presented, but also by the fact that it is located in a picturesque natural environment. In this environment, objects of historical and socio-cultural significance are presented in a single complex," he said.

Speaking about future visitors to the park, Mzauch Piliya noted that free admission to the territory is provided for all citizens of Abkhazia, as well as for Russian military personnel serving in the military contingent in Abkhazia, and their families.

Rash Zantaria, director of "Apsny Park" and part-time architect of this large-scale project, said that the main task in creating the expositions was to preserve the traditional Abkhazian style.

In the photo: the main room of the аюныду (a big house – ed.) - the living room. All family members gathered there after a hard day there, as a rule.
© WAC / Ilona Khvartskiya
In the photo: Abkhazian traditional four-pointed towels. There are also eight- and twelve-pointed ones, but they are extremely difficult to find. These towels were hung in the house on holidays. Thus, the hostess, on top of everything else, demonstrated her needlework skills.
© WAC / Ilona Khvartskiya

"For this, throughout the entire work on the project, we were in touch with the Abkhazian scholars who helped us. We also relied on historical materials in order to more accurately recreate the traditional life of our ancestors," Zantaria shared the details.

He said that construction work in the "Apsny Park" is not yet completed, and that there are still many ideas that "will definitely be implemented". 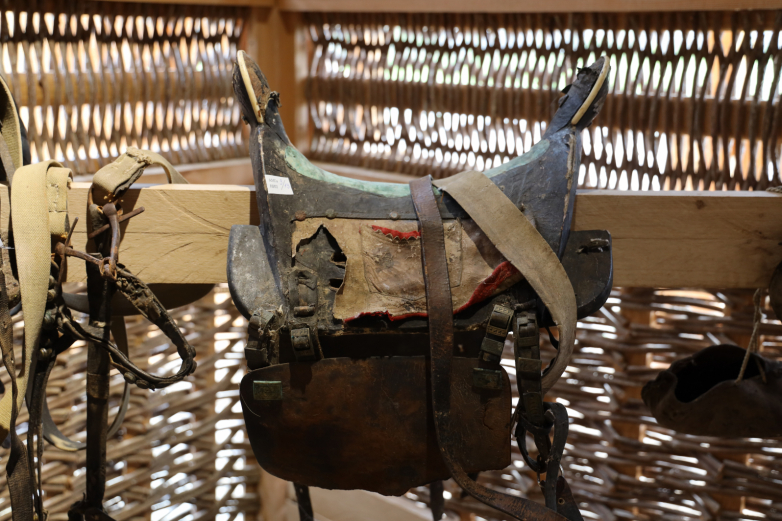 The famous Abkhazian scholar Adgur Kakoba provided active assistance in the work on the "Apsny Park" project. He called the park a "grandiose project" that has absorbed many aspects of the history, culture and traditions of the Abkhazian people.

"When Mzauch shared his ideas with us, we believed him, and, as far as we could, stood next to him," he said.

The scholar believes that the project will be of great importance in the process of educating Abkhazian youth.

"Our children can see firsthand what they are taught from the books," he explained.

The famous Abkhazian artist Batal Dzhapua is also among those who worked on the park project. In turn, he praised the "Apsny Park". 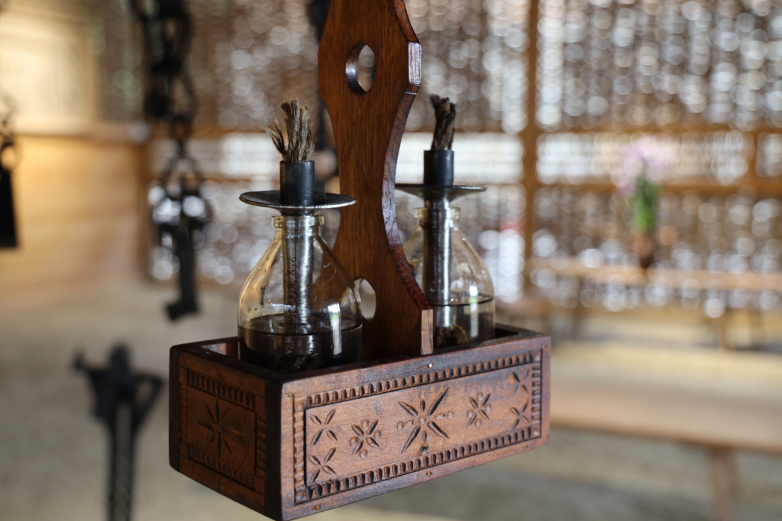 Dzhapua recalled that there had been earlier attempts to implement such an idea, but for various reasons, no one had yet been able to implement it. The first president of Abkhazia Vladislav Ardzinba supported a similar idea, according to him.

The artist remembered how one day he himself was immersed in the project.

"Mzauch Piliya came to me and said that he would start work tomorrow. I doubted it, but the next day he sent me a video on which the tractors were working. This is how we started working on the project. Mzauch set such a pace that sometimes we do not even have time. It's all thanks to him," Batal Dzhapua shared.

Another active participant in the project is the famous Abkhazian blacksmith Timur Dzidzariya.

This is agara (агара) (cradle in translation from Abkhazian – ed.). The artist Batal Dzhapua saw it on the road in the village of Akarmara. It just was out there in the street, and there was not a single residential building around. He understood that it would be wrong to leave it there, and took it to his workshop. Then he restored it, and now it is an integral part of the "Apsny Park" exposition.
© WAC / Ilona Khvartskiya
In the photo: a cozy corner in the traditional Abkhazian апацха (traditional Abkhazian kitchen - ed.), which was built, or rather woven, in almost all Abkhazian courtyards.
© WAC / Ilona Khvartskiya

In a welcoming manor house and craft courtyard

A fascinating excursion was conducted for everyone who attended the opening.

The territory of the park is divided into several thematic zones. 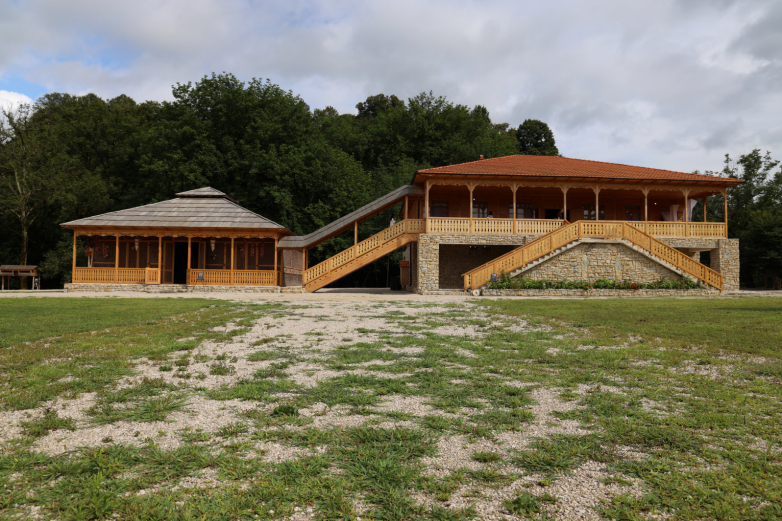 Particular attention is drawn to the large and well-groomed courtyard, which has always been and remains an integral and characteristic part of the Abkhazian estate.

Indoors, in the акуаскиа residential building, in апацха, in амхара, the interior elements have been recreated taking into account the smallest details. Various pieces of furniture are used in the interior design of the dwelling, such as wooden benches, sun loungers, sofas, tables, benches decorated with hand-made carpets, embroidery, skins and weapons. 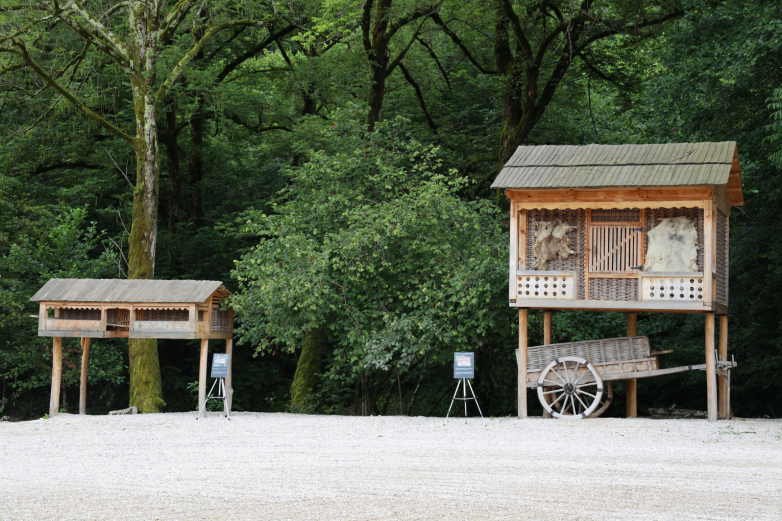 The ethno park authorities attaches great importance to the authenticity of all buildings on the territory of the park. In the photo: акутыцра (chicken coop) and аца (storage for corn).
© WAC / Ilona Khvartskiya

The guide said that the whole complex is a museum. Its task is to show the development of objects of material culture through various types of household items, furniture, weapons. The museum is currently at the stage of formation; its collection and exposition are constantly replenished.

An exhibition hall is located on the ground floor of the акуаскиа, which will later open its doors to various thematic exhibitions.

Апацха is a type of wicker dwelling with a canopy decorated with carvings. Stakes used to be made of oak and hazel, for weaving they used rods from rhododendron, azalea. This is recreated in the exhibition. Inside the апацха there are various pieces of furniture and everyday life; it is planned to create exhibitions representing household tools. In the center of the апацха there is a hearth and a hearth chain. 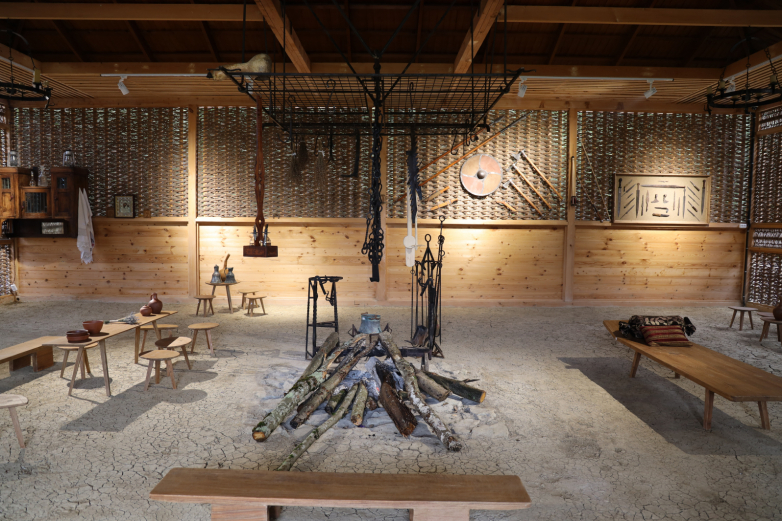 Here is how апацха looks from the inside. It is a type of wicker dwelling with a carved canopy. Stakes used to be made of oak and hazel, for weaving they used rods from rhododendron, azalea. In the center of the апацха there is a hearth and a hearth chain.
© WAC / Ilona Khvartskiya

The entire estate is fenced with a wicker fence, but not an ordinary one: one fence shows 12 types of traditional wickerwork. A special element of the estate is the traditional gate. The gate has a canopy decorated with carvings.

A separate part of the park is made up of historical buildings, called the "craft yard": a smithy and pottery are already functioning here. It is planned to open carpentry workshops and адзыдзлагара (water mill – ed.).

A huge ethno park "Apsny Park" opened in Abkhazia: its area is 10 hectares.
© WAC / Ilona Khvartskiya
This is амхара - the newlyweds' house. It was customary for the Abkhazians not to bother the newlyweds, they were given time to be alone, to get to know each other better. For this, a light structure was built from rhododendron, but in the cold season, the walls of амхара were hung with animal skins, carpets, and a mat.
© WAC / Ilona Khvartskiya

The park designers plan to open a corner with monuments of ancient Abkhazian architecture, such as a dolmen (ancient burial and cult structures - ed.), ацангуара (ancient stone buildings preserved in the mountains, made in the form of cyclic circles, made of stones - ed.), a unique defensive structure - the gateway of the Anakopia fortress.

In the center of the park, there is a stylized medieval abaash tower: the administrative center is located here. The facade of the tower will be painted in the street art style on the mythology and history of Abkhazians, Ubykhs and Circassians.

In addition to office space, the tower will house exhibition areas and premises for conferences and presentations, temporary and permanent exhibitions and sales of decorative and applied products. 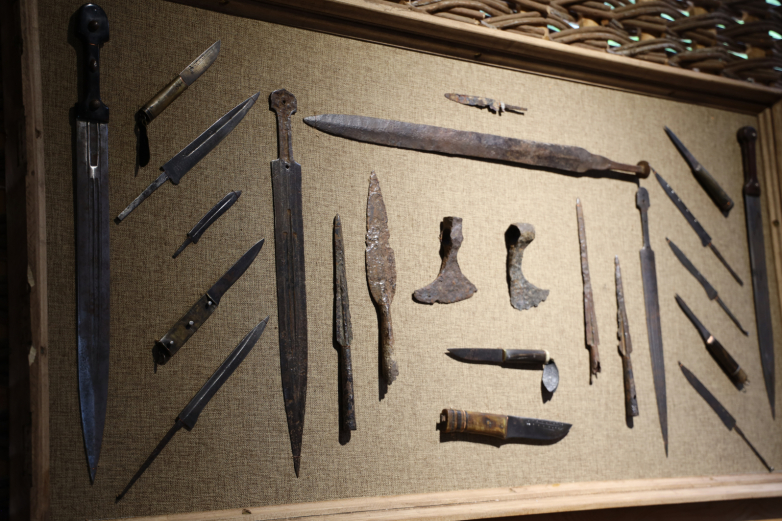 One of the walls of the апацха backyard in the ethno park is decorated with various types of traditional weapons.
© WAC / Ilona Khvartskiya

Everything for recreation - active, cultural and simply "tasty"

Near the abaash tower, there is a platform for shooting a traditional bow from a distance of 100 meters. Here, under the guidance of an instructor, everyone can try archery. The organizers plan to open a school to teach children and adults archery.

In "Apsny Park" there is also a special area for horseback riding, and one can take a horseback excursion to the nearest dolmen complex in the village of Otkhara with a stop for a picnic and rest. The plans include another school for teaching traditional Abkhazian horseback riding.

On the territory of the park, it will be possible to purchase and taste organic traditional food products: jam, adjika, honey, wine. All products will receive certificates of authenticity and quality after special analyzes and tests.

A three-dimensional map of Abkhazia will be built in the park, which will recreate the relief of the area. It will show the entire territory of Abkhazia and the existing historical monuments and structures.

On the territory of the park, it is also planned to create a theater platform with an amphitheater for 600 - 700 seats, which will fit into the natural landscape of the hill.

Anyone can visit the ethno park. Opening hours of the park: daily, except Monday, from 9:00 to 19:00. There will always be guides on the territory of the park.