A song on canvas: WAC organized an exhibition of children's drawings on Children's Day

An exhibition of children's paintings by young artists who were inspired by the film about Abkhazian folk songs was held in Sukhum on Children's Day.

An exhibition of 60 children's paintings by students of the circles of the Ochamchira boarding school and the Pitsunda studio "Art.Vabaga" was held at the Abkhazian Drama Theater in Sukhum on Children's Day on June 1. Young artists painted on a given topic - "Heroes of Abkhazian songs."

The participants of the exhibition had previously watched Madina Argun's film "Abkhazian Folk Songs", which was recently premiered within the framework of the WAC "Amazara" project, and were inspired to work. 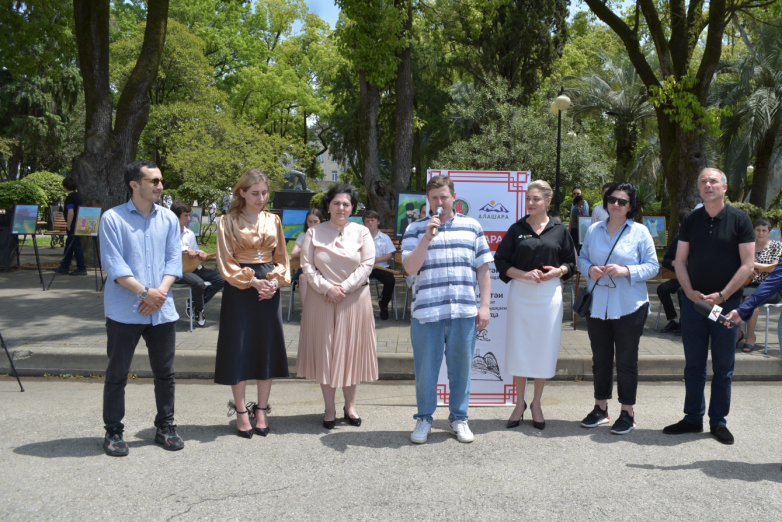 11th grade student Sania Adleyba decided to illustrate the "Song of the Gods" from the film and painted on the canvas a praying woman.

"She prays for her sons who went hunting - that they return safely, and that the god of animals Azhveipshaa be favorable to them. The mountains in the picture symbolize the inviolability, the strength of the mother's faith. The sky, flooded with the sun rays, is in golden colors, because it is the color of abundance," the girl said. 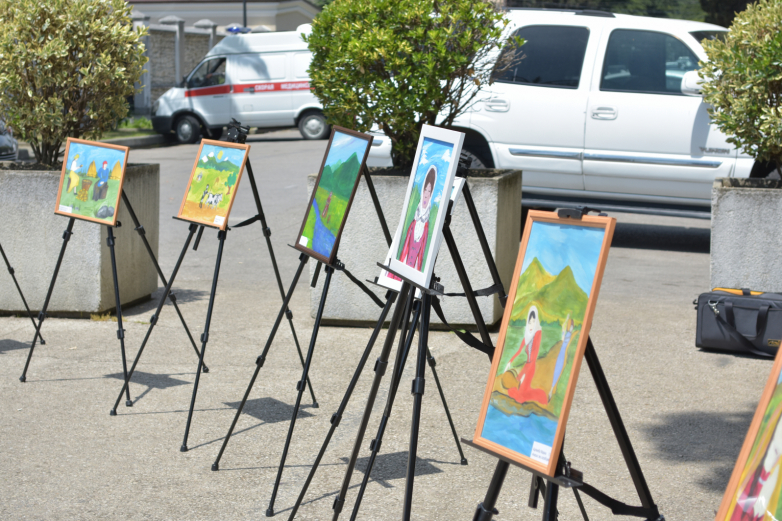 14-year-old Kamilla Shakaya depicted in her painting one of the hundred Nart brothers from the Nart epos.

"I liked the song about the wound (meaning "Ахәрашәа" - "Song of the wound" - ed.). It immediately occurred to me to draw Kyatauan, a Nart that was bitten by a snake. His mother and Nart brothers came to his singing and cured him. I made sketches, then transferred everything to the canvas," Kamilla shared.

The circle of fine arts at the Ochamchira boarding school is headed by Lika Pachulia. She noted that the children showed interest in the proposed task - to draw the associations that they have when listening to songs and watching a film about Abkhazian folk songs. They received this task a month ago. 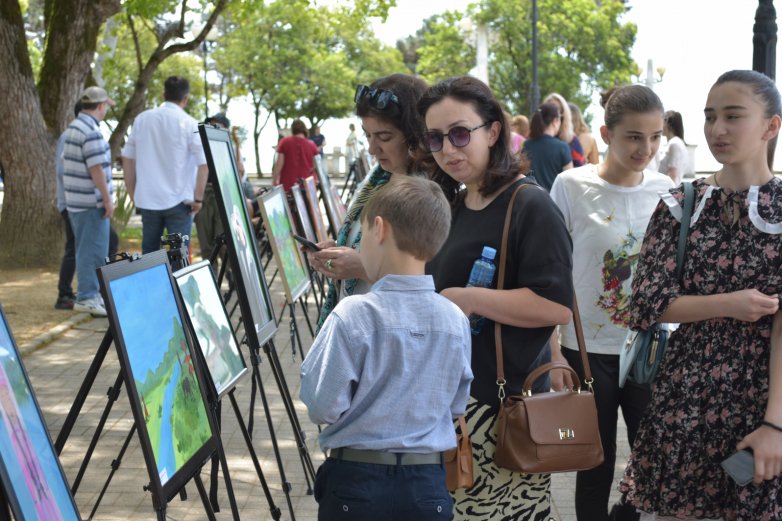 "Thirty drawings were painted in a month, some of the children had two or three paintings. Their plot is the most diverse: here are the heroes of legends in the wake of a heroic song, and harvesting based on a labor song, and a lullaby. There are a lot of interesting incarnations of images," the teacher believes.

She said that the participants of the film came to Ochamchira to show the film and give lectures on folk songs - the head of the "Akhyshtra" choir Esma Gumba, the artist of the choir Rashida Ayba and the honored artist of Abkhazia Roman Sabua, who in the film tells about the history of songs in a voiceover. Nine-year-old Simona Gablia came from Pitsunda with her mother. Standing at her picture, the girl said that she depicted a peasant on it.

"Grandfather is standing here, he is mowing the grass, here is a haystack nearby. Not far away, chickens are eating grass," Simona pointed out.

Her mother Salita Agrba noticed that the girl loves to attend classes at the "Art.Vabaga" studio under the guidance of Valeria Bagdadze. The woman believes that the opportunity to participate in an exhibition in the capital of Abkhazia is a significant event for a child.

"I thank the organizers and authors of such a wonderful idea, the World Abaza Congress. Thank you so much for inviting the children, this is a joy and encouragement for them. It is an honor to exhibit at such an event," said Salita Agrba.

Composer Temur Agrba, head of the WAC in Pitsunda, recalls that when the film was shown, the children were so inspired that they immediately began to vying to share the plots of their future films.

"We, adults, could only welcome the children's desire to recreate what was conceived on canvas.  Children from the studio of Valeria Bagdadze drew about 30 pictures in 5-6 days. All of them were among those exhibited in Sukhum. Shortly before that, we held an exhibition in the courtyard of the Pitsunda church. I am pleased to urge everyone to support projects such as "Amazara", because thanks to them, children, teenagers, youth, and many adults will learn more about the national culture," concluded Agrba.

The director of the film "Abkhazian Folk Song", the Honored Artist of Abkhazia, the director of the theater Madina Argun, came to see the paintings of children, exhibited on easels at the Abkhazian Drama Theater. She was impressed by the children's creative imagination and expressed her satisfaction that the "Amazara" project had such a continuation.

"Two years ago, when we started the film, we didn’t even imagine that it would turn into such an exhibition. When a person of art makes a product, he thinks: what's next? Today's pictures of children, their interest in the topic is the best reward for me as the author of the film. What could be better than when your work serves as an impetus for the development of interest in folk song? After all, the national theme is represented here. This is what the film was intended for," said the director. During the official part of the exhibition, the head of the Women's Councils of the WAC, Geta Ardzinba, expressed her gratitude to the young authors "for immersing themselves in the world of folk songs", and then shared her impressions with the correspondent of the information portal.

"We are very pleased with how the children immersed themselves in the atmosphere of the film, how their imagination drew images of folk songs. They beautifully, skilfully lay it out on the canvas. Usually, as part of the work of circles and studios, children draw still lives, the sun, but here there was a specific task. The guys consciously watched the film, listened to Abkhazian music, [off-screen] text that conveys the essence of the birth of folk songs. Therefore, what they depicted follows the plots of the songs," said Ardzinba. 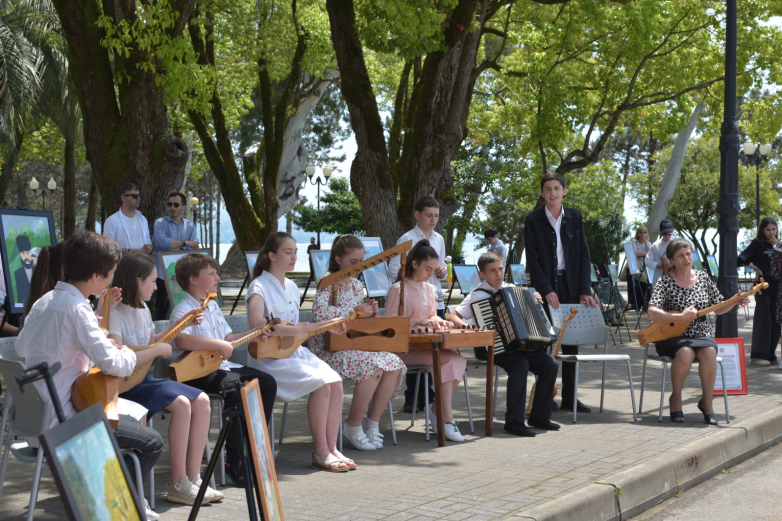 Lana Pachalia has been playing the ayuymaa (Abkhazian folk stringed instrument - ed.) for eight years. She admitted that before she joined the circle, she had never even seen this instrument.

"When I heard the sound, I chose it in order to be able to play it in the future. It sounds beautifully and looks very nice," the girl said, demonstrating a musical instrument. 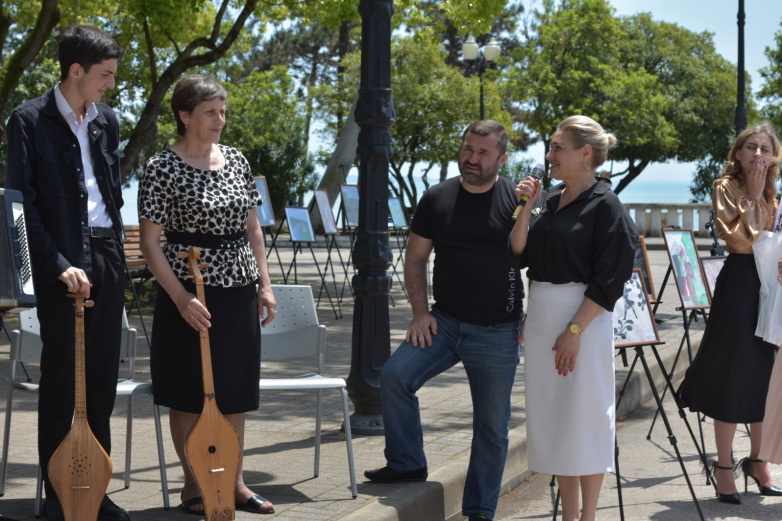 Each exhibitor was given certificates and gifts.

The WAC expresses its gratitude to the "House of Moscow" for the help in organizing the exhibition represented by the director Sandro Bigvava, the Department of Culture represented by Naala Khashig, the Department for Youth and Sports of the Administration of Sukhum, the management of the company "World of Beer" for the sweet gifts provided. 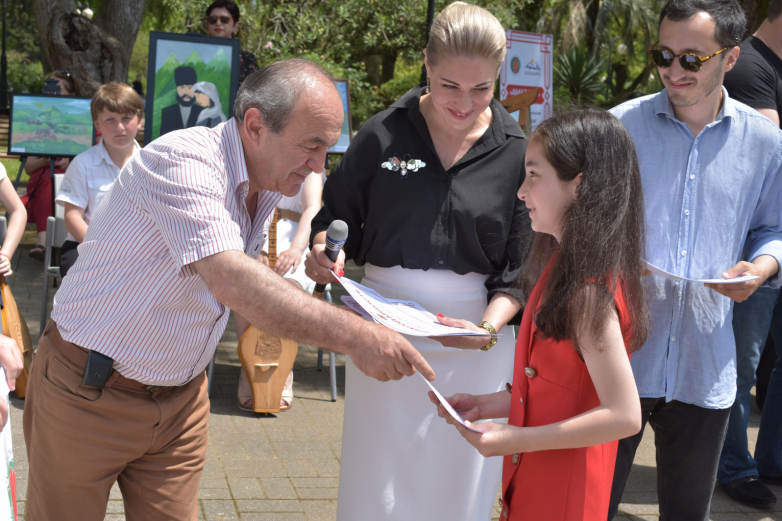 The "Amazara" project of the World Abaza Congress and the ANO "Alashara" is dedicated to the intangible heritage of the Abkhaz-Abaza people. The author of the idea is Mussa Ekzekov, Chairman of the Supreme Council of the WAC. The project is aimed at promoting the intangible cultural heritage of the Abkhaz-Abaza people through modern Internet technologies. Within the framework of the project, four films were created and presented - about the Abkhazian national dance, about the Abkhazian folk song "Нарҭаа рышҭыбжь", about the traditional knife business of the Abaza and about Abkhazian folk songs.

Celebrated on June 1, International Children's Day is one of the oldest international holidays. The decision to hold it was made back in 1925 at the World Conference on the Welfare of Children in Geneva.