More than 20 participants of the London dernek attend Abkhaz language courses, which are conducted by a student from Abkhazia.

Weekly lessons of the Abkhaz language are organized for participants of the London dernek (Abkhaz-Abaza Cultural Center - ed.). Native language to compatriots is taught by a resident of Abkhazia Lana Basaria, who came to the UK to study.

In an interview with the WAC web information portal, Lana Basaria told that in 1990 her relative - aunt - Svetlana Basaria also taught the Abkhaz language to representatives of the Abkhaz-Abaza Diaspora in London. Then language classes were held three times a week for six months.

“This is a short time to start speaking freely, and given the specifics of our language, it is even more difficult. However, they managed to learn to speak on everyday topics. Those who already understood the language started talking very soon. We worked interactively, the topic was set, and dialogues were designed. Of course, I consult with my aunt, it is important for me to come to the classes prepared,” - noted Basaria.

Lana Basaria herself conducts classes once a week - for two hours. The teacher understands that this time is not enough for a deep study of the language. However, she explains, today this is the “only opportunity”, since she has to combine the teaching of the Abkhaz with her own studies at the university.

For a teacher Basaria, it is pleasant to realize that students, many of whom live far from dernek, after a long working day, “make this tedious way” and “come to school motivated”.

“It is even a shame that at the moment everything I can give them is only two hours a week,” Basaria shared.

She said that the age of students is completely different: from 30 to 65. The level of knowledge of the language is also different: someone started to learn it from the very beginning, and someone can already speak a little. Among the language learners there is even a Turk, the spouse of an ethnic Abkhaz. 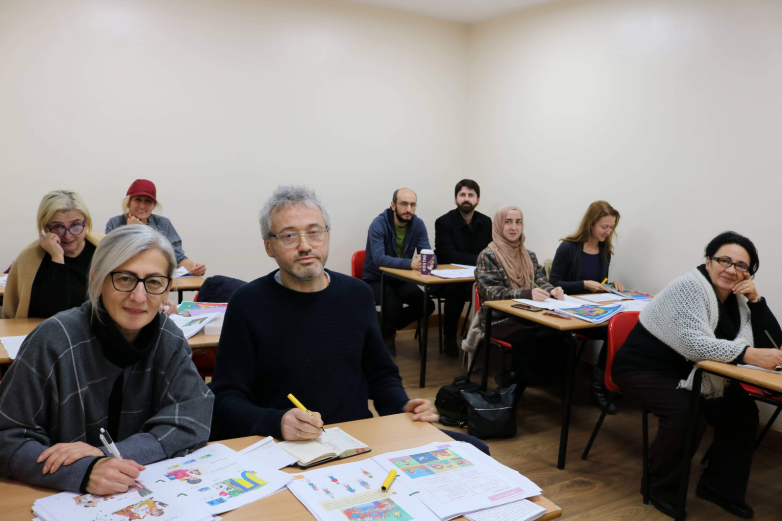 “We have quite lively lessons: mostly students are interested in speaking. But I want to give them more than just one aspect of language learning,” said Basaria.

One of the students enrolled in the courses, Atakan Chkotua, noted the complexity of the Abkhaz language and the objective difficulties in learning it.

“There are very few textbooks available with appropriate content, or websites. The language itself is certainly difficult, but you can study it. Studying it outside the language environment also presents certain difficulties,” explained the graduate.

However, the study of any language is a very interesting process, he said.

“I hope I will be able to learn the Abkhaz language and literature as much as possible,” concluded Chkotua.

The chairwoman of the London dernek, Jeschim Trashba, reported that the cultural center today includes more than 100 people, and about 20 of them regularly attend Abkhaz lessons. Dernek organizes other activities and events to unite compatriots.

“Most of our members visited Abkhazia. We participate in the work of the World Abaza Congress, we maintain contact with some institutions in Abkhazia, for example, the Chamber of Commerce and Industry,” said Trashba.

The Abkhaz-Abaza Cultural Center in London has been operating since 2013, it includes more than 100 members. Dernek participants arrange regular meetings, maintain active communication with Abkhazia.

Abkhazian language Lana Basaria
To leave a comment you need
to login or register.
Share
No comments