All that’s left are emotions and a sense of unity: the first “Abaza” festival ended in Sukhum

The cultural and sports festival “Abaza”, which was held in Abkhazia on October 16-18, ended with a large-scale holiday in Sukhum.

The first cultural and sports festival “Abaza”, which was held in Abkhazia by the World Abaza Congress, ended with a big holiday on the Makhadzhir’s Embankment in Sukhum on Friday, October 18.

A stage was set up on the square near the Abkhaz State Drama Theater. By noon, townspeople and guests of the festival began to gather here. National music played, creating a festive mood for everyone. After some time, the hosts of the festive program appeared on the stage - well-known in Abkhazia and Karachay-Cherkessia artists Kiasou Khagba and Aminat Napsheva. After their welcoming words, the Chairman of the Supreme Council of the World Abaza Congress Mussa Ekzekov stepped on the stage. He addressed the guests of the holiday, telling about the history of the Abkhaz-Abaza people and that the traditions of the festival should be strengthened.

“We must maintain the culture and image of Abkhazia. We must understand that distances cannot interfere with our communication. Our problem is that we rarely communicate. From now on, in the future we will communicate more closely. There is nothing that we could not handle together. Our history is evidence of this. What our history will be in the future depends on us, on how we will relate to each other, support each other. Today, we together managed to show that we can confidently continue to move forward,” said the head of the WAC.

Abkhaz and Abaza dance groups, singers and musicians appeared on stage one after another. During the concert, the long-awaited main prize was awarded to the winner of the VIII international freestyle wrestling tournament, which ended earlier - the special cup of Mussa Ekzekov. Its owner was Alan Tabulov from Karachay-Cherkessia. 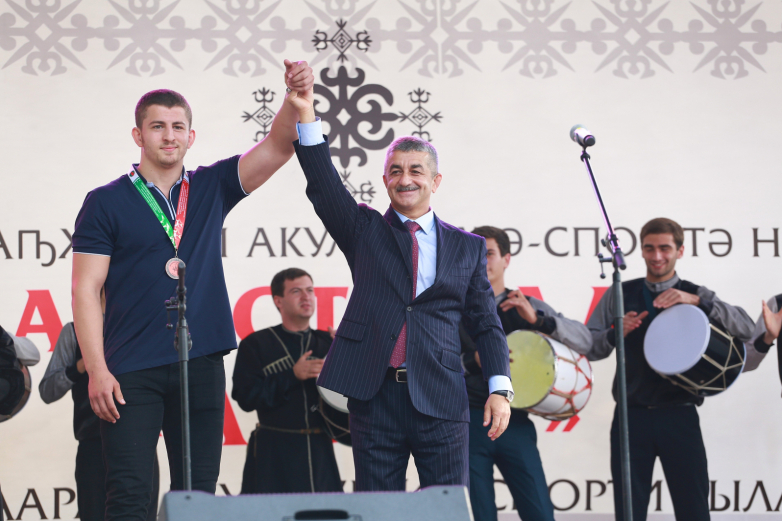 Mussa Ekzekov invited a young fighter from Turkey, who first came to his historical homeland, to the stage. Serdar Shamil Gul Dokhmaa received an honorary medal from the hands of Ekzekov.
© WAC / Naala Avidzba

In the final, the festival prepared for its guests, in addition to the concert, many more surprises. The festive zone was divided into several venues: here is a “gallery” of old Abaza photographs printed in poster format, there is a platform with linguistic maps, and nearby is an exposition from the storerooms of the Abkhaz State Museum collection and photographs of exhibits from the ethnographic museum of the village of Elburgan. 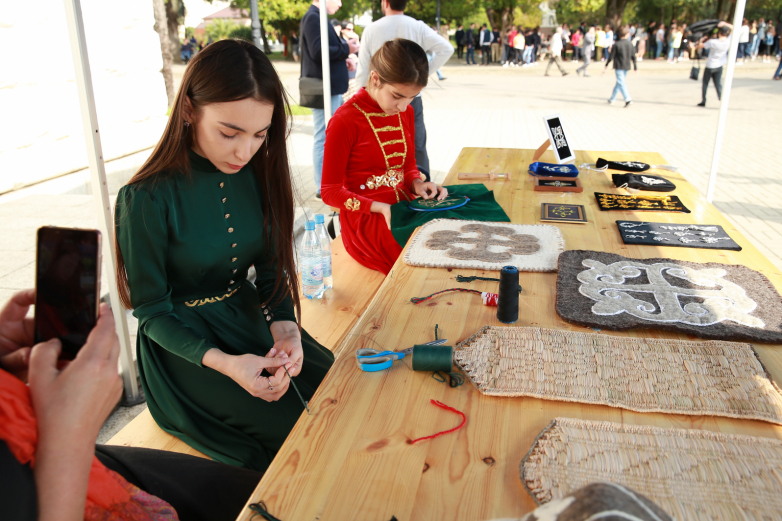 During the holiday, everyone could attend a master class on the basics of boston weaving (braid weaving on fingers - ed.) and gold embroidery.  Actors of the folk theater “Inzhich” and the KChR state dance theater staged the old Abaza rite of bringing the bride home. 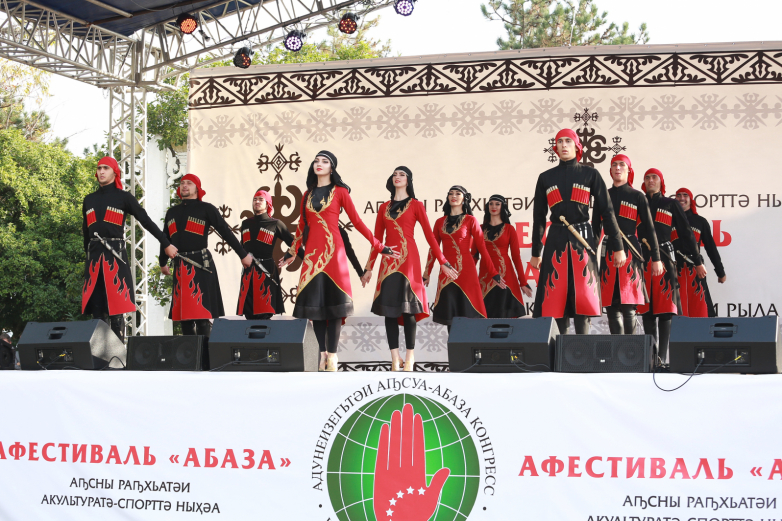 “It was an amazing sight. I'm glad I brought the children. Today, Sukhum really plunged into the atmosphere of the holiday. Thanks to all the organizers,” Madina Avidzba, a resident of Sukhum, expressed gratitude.

All guests, of course, were attracted by a food court with national Abaza treats specially prepared by the Women's Council of the ANO “Alashara” from Karachay-Cherkessia.

“I’ve never tried national Abaza cuisine before. There is hominy, but it is customary to cut it into pieces and serve cold. The cuisine itself seems to be similar, but at the same time very different. I especially liked the Abaza desserts. The festival is great. When else would we try Abaza dishes in the center of Sukhum!” - journalist Naala Kove shared her impressions.

The cultural and sports festival “Abaza” was also visited by the country's leaders, led by the President of Abkhazia Raul Khadzhimba. The President went around all the venues of the festival and also tasted dishes of national Abaza cuisine. 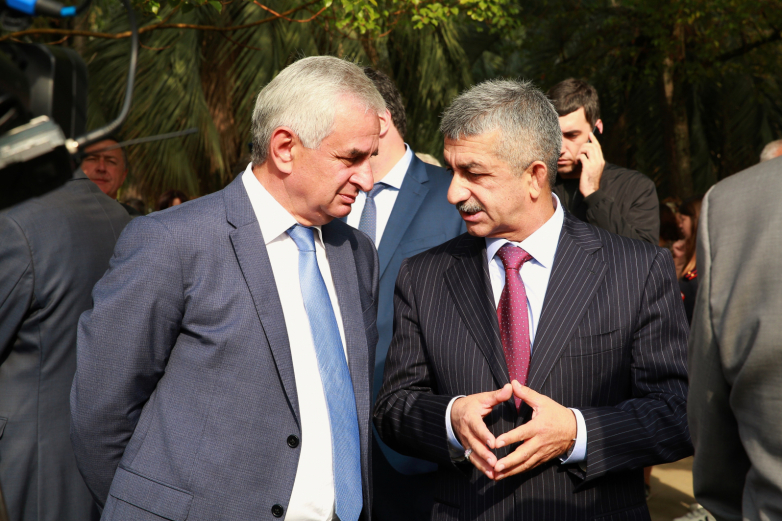 The Vice-President of the Republic of Abkhazia, Aslan Bartsyts, noted that the festival for two days has become a center of attraction for hundreds of Abkhaz and Abaza and gave them a real holiday of culture and sports.

“This is a significant event in the history of relations between our ethnic group. We are glad to see so many of our brothers and sisters here in Abkhazia. I’m sure: the “Abaza” festival will become traditional and will delight us all for many years to come,” said the Vice President. 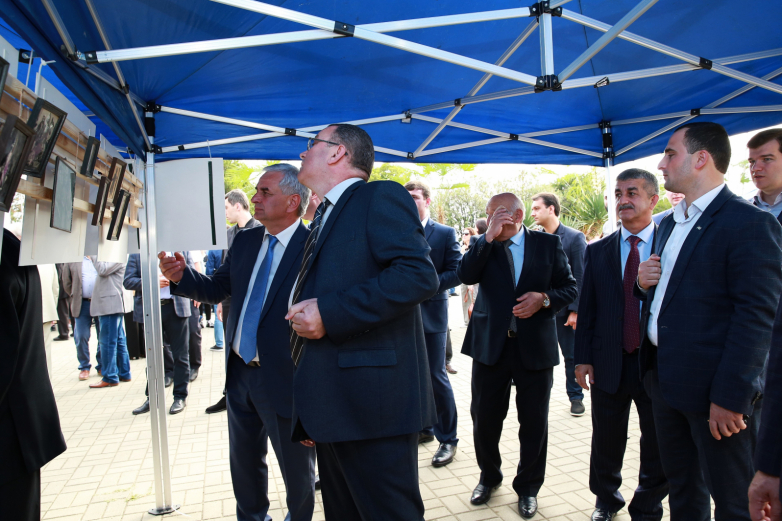 The festival was organized in such a way that everyone could find something they really like and relax with all their heart. So, a special zone was assigned for children, in which they were entertained by the characters of their favorite cartoons.

“I remember the celebration of Children's Day (also organized by the WAC in June - ed.). When it ended, we expressed hope for another one to take place. I really like it here,” said seven-year-old Marat Bartsyts. 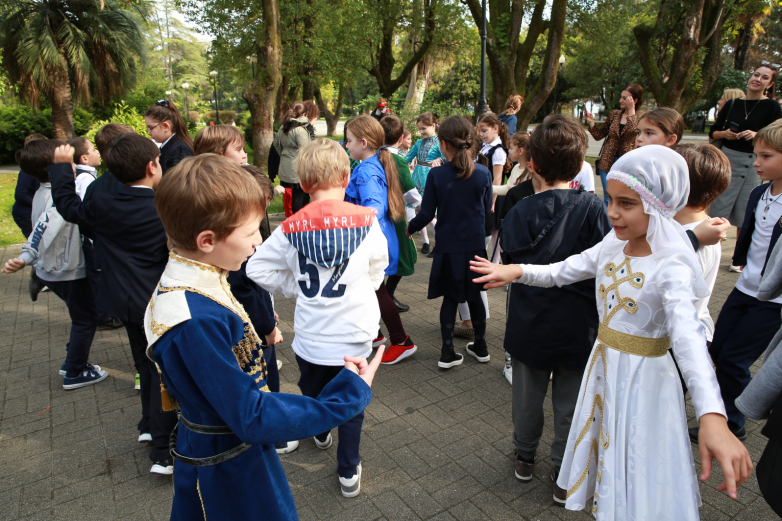 Holidays organized by the WAC are an excellent occasion for their guests to dress up in national costumes. The cultural and sports festival “Abaza” was no exception. Everywhere it was possible to see adults and children dressed in traditional Abkhaz clothing. These outfits especially decorated the festival. 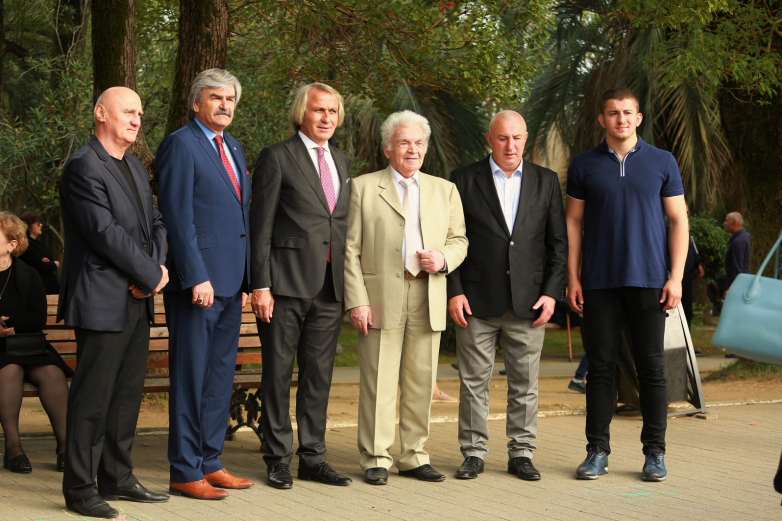 “I came here with my mom and friends. I really like it here. I love to wear a national costume because I am an Abkhaz,” said Arsou Gunba, a boy who came to the festival in national clothes. 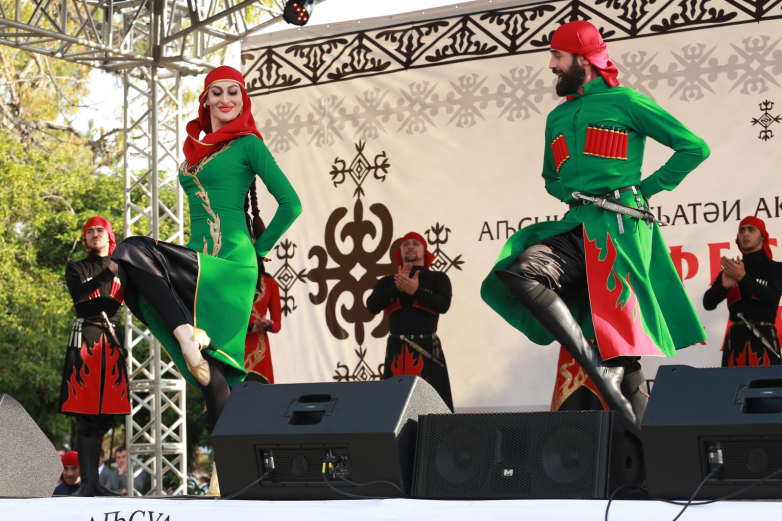 Geta Ardzinba, head of the Women's Councils of the World Abaza Congress, commenting on the course and atmosphere of the event, emphasized that the expectations of the organizers of the festival were met.

“Our main expectation came true: we introduced a large number of Abkhaz and Abaza youth to each other. Yesterday, Abkhaz and Abaza volunteers worked together on the site. We introduced [creative] teams that were not previously introduced. Of course, there have always been connections, but the festival has become a large territory of unity. Everything turned out all right, and we are glad that we hosted [in Abkhazia] the first cultural and sports festival “Abaza”, said Ardzinba.

She said that the festival was preceded by a long process of preparation.

“We have been waiting for this day for a very long time, carefully preparing for it, we understood the responsibility. In the modern history of Abkhazia, for the first time, our Abaza brothers visit their historical homeland in an extended  composition: the delegation totals almost 100 people. It was important for us to show our historical, ethnic and linguistic community,” Geta Ardzinba shared. 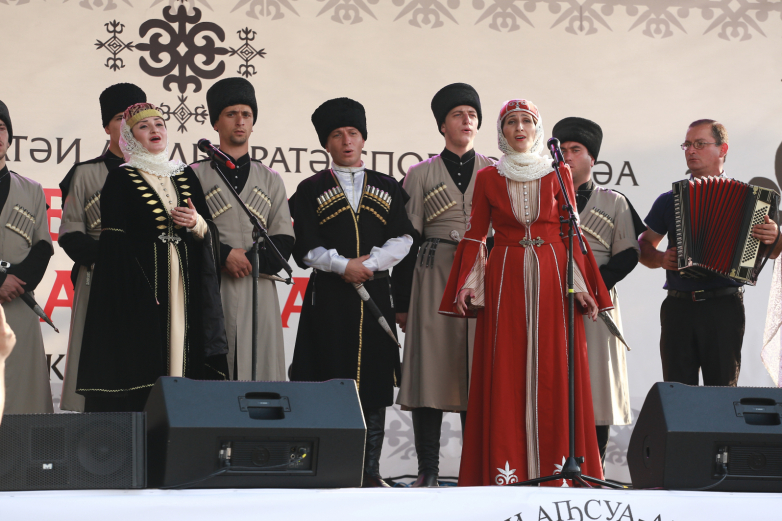 The festival continued with festivities until late in the evening.

The first cultural and sports festival “Abaza” in Abkhazia started on October 16 with an international freestyle wrestling tournament for the cup of the Chairman of the Supreme Council of the World Abaza Congress and lasted for three days.

The will to win: photo story of the eighth freestyle wrestling tournament for the Ekzekov cup
Bright colors of “Abaza”: folk dances, songs and ancient rite
Emotions and impressions: guests and organizers on the first “Abaza” festival in Abkhazia
First “Abaza” festival: the origins of a good tradition