Results of the freestyle wrestling competitions were held in Abkhazia and Karachay-Cherkessia with the support of the Chairman of the Supreme Council of the WAC Mussa Ekzekov.

VII Ekzekov Freestyle Wrestling Tournament ended on Wednesday November 28 in Gudauta, and the Abaza Club freestyle wrestling competition took place several days earlier in Karachay-Cherkessia. Both sporting events took place thanks to the significant contribution and support of the Chairman of the Supreme Council of the WAC Mussa Ekzekov. 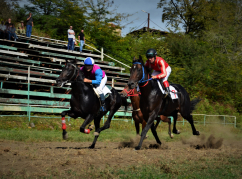 Annual equestrian sports competitions were held in the village of Myku

The freestyle wrestling tournament named after Mussa Ekzekov is held in Abkhazia for the seventh year in a row. Traditionally, it was considered international: fighters from Kabardino-Balkaria, Karachay-Cherkessia, Chechnya, Dagestan, Krasnodar Region and Rostov Region took part in it. This year, only athletes from Abkhazia participated in the tournament, and the competitions acquired the status of republic-wide.

The Vice-President of the Freestyle Wrestling Federation of Abkhazia, the director of the "Abaza" sports club Leonid Bodzhgua noted that this year the tournament was attended by athletes of 18 weight and four age categories. The tournament brought together more than 200 athletes from all regions of the Republic.

"The level of our athletes is very good. Many of them are winners of prestigious awards. The work of coaches is worth noting, which is also at a high level," said Bodzhgua.

The President of the Freestyle Wrestling Federation of Abkhazia Rush Khutaba, commenting on the event, noted that the tournament, as always, was held at the highest level.
He expressed confidence that the prestige of the tournament will grow, and emphasized the contribution of Mussa Ekzekov to the development of freestyle wrestling in Abkhazia. 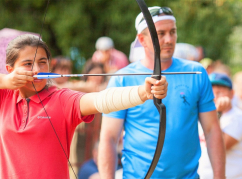 "For many years now he has been paying salaries to our coaches, assisting in acquiring all the necessary equipment, often providing financial assistance to our wrestlers so that they can perform at international tournaments," Khutaba explained.

The winners of the freestyle wrestling tournament named after Mussa Ekzekov were awarded with cups, medals and certificates.

With the support of the Chairman of the Supreme Council of the World Abaza Congress, Mussa Ekzekov, Karachay-Cherkessia on November 24 also hosted the third demonstrative freestyle wrestling tournament of the "Abaza" club.

Rasul Chukov, president of the "Abaza" freestyle wrestling club, deputy head of the Separate Division of the ANO "Alashara" in Cherkessk, explained that thanks to sponsors, first of all to Mussa Ekzekov, athletes take part in various competitions throughout the year and hold demonstrative competitions by the end of the year.

"In this tournament, we show what we have learned in a year," he said.

Chukov said that this year the competitions were held in the native village of Mussa Ekzekov - Krasny Vostok: now there is a modern Sport Palace, built with the financial support of Ekzekov.

"Now the village of Krasny Vostok has this wonderful Sport Palace, which can host competitions of the highest level. And parents have the opportunity to come and watch their children compete," Chukov added.

In the third freestyle wrestling tournament organized by the "Abaza" freestyle wrestling club, 155 athletes from the KChR took part. Last year there were 80 participants, that is, almost two times less than in the current year: the tournament is gaining popularity. For the first time it was held in 2016 in the city of Cherkessk.