Thousands of people came yesterday to commemorate those who fell victim to the Caucasian War and forced resettlement. Mourning events were held in Sukhum, Gagra, Gudauta, as well as in Turkey - in the Black Sea town of Kefken. During the rally in the Abkhaz capital, a video bridge was held between Abkhazia and Turkey.

Traditionally commemorative events on this day in the Abkhaz capital take place in the evening by the sea, on the Promenade of the Makhadzhirs. Despite the rain, with the onset of dusk, hundreds of people gathered here. The leadership of the country, led by the President Raul Khadzhimba and the Chairman of the Supreme Council of the World Abaza Congress Mussa Ekzekov joined the funeral procession.

With flags and torches, the gathered marched from the ​​Sergei Bagapsh Square to the monument to the Makhadzhirs, where they honored the fallen for a minute, laid flowers at the monument and let the wreaths down the water. At the end of the ceremony, the Fire of Memory was lit by the shore.

The descendants of those who once left Abkhazia are sure that this monument is a landmark place for both those who returned and those who still live far from their historical homeland. A clenched fist and raised to the sky hand of a rider falling from his horse is a symbol of the coming revival of the nation. 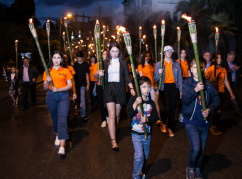 Day of mourning: Sukhum honored the memory of victims of the Caucasian War

At the mourning rally that took place at the monument, the gathered talked about the tragedy, the victims of which were tens of thousands of innocent people, about the need to remember the lessons of history and draw conclusions from them.

Presidential Adviser Vladimir Zantaria noted that the forced eviction became a black period in the history of the Caucasus, and emphasized that Abkhazia should strengthen the repatriation of the descendants of the Abkhaz and Abazins, expelled from their historical homeland.

Atanur Akusba, the head of the Federation of Abkhazian Cultural Centers in Turkey, called the rally participants to honor their history and the memory of their ancestors.

The Minister for Repatriation Beslan Dbar, in turn, stressed that repatriation is not a one-time action and that the process will go on constantly.

"We must understand one thing: if we forget the past, then we will not have a future. And I pray to God that our compatriots who are on the other side of the Black Sea have every opportunity to return to their historical homeland," the Minister added.

Among those who took part in the funeral procession, there were many descendants of the makhadzhirs who had already returned to live permanently in Abkhazia.

Anyl Khrachba has just arrived in Sukhum from the Turkish city of Duzce a month ago. The young man speaks Abkhaz well and proudly mentions that his family, belonging to the Akhchipsou tribe, lived in the upper reaches of the Mzymta River on the border of the modern Krasnodar Territory and Abkhazia.

"Our great-grandfathers experienced many trials, suffered terrible deprivations. Today I could not help coming here, like my friends, also repatriates," Anil said.

"Frankly speaking, I could hardly restrain my tears," Mussa Ekzekov will later tell us about what he saw.

The Chairman of the Supreme Council of the WAC admitted that he was amazed at how everyone from children to adults, especially kids, reacted with awe to this day.

"I'm sure that we will learn lessons from history and do everything so that nothing like this ever happened. Moreover, we will do our best to correct the mistakes of history. We will unite and together we will pave the way home. We need to work hard for this, but I believe that we are ready for this," said Ekzekov.

The Day of Mourning is not accidentally held on May 21. On this day in 1864, a military parade of Russian troops was held in the tract of Kbaad (the present Krasnaya Polyana in Russia) in honor of the victory over the mountain peoples in the half-century Caucasian war. For hundreds of thousands of people, the defeat predetermined a further fate. They were forced to leave their historical homeland and move to the Ottoman Empire, and from there all over the world.

Day of sorrow for the victims of the Caucasian War Sukhum
To leave a comment you need
to login or register.
Share
No comments