The Abaza puppet theater «Amara» in Karachay-Cherkessia opened a year ago, but has already managed to gain the love of the public. Performances based on folk tales are loved by adults and children and give the audience pearls of native culture. The WAC correspondent has attended a rehearsal of a puppet show and talked with the theater team.

A kind and instructive tale about a wolf and a ram only at first glance seems to be a story for children. In fact, the performance of the Abaza puppet theater «Zagedan River» is a philosophical parable, at the same time understandable to both adults and children. The script is written based on the Abaza folk tales. So the theater «Amara» promotes native culture, history and folklore.

«Amara» is translated from the Abaza as «the sun.» The puppet troupe is actors of the State Abaza Theater, five young people who are dedicated to the art and culture of their people.

The theater opened in Karachay-Cherkessia a little more than a year ago and traveled the whole republic with tours. We met with the actors and artistic director of the theater Zurab Kopsergenov just before the trip to Stavropol, where the team will give several performances a day.

The existence of puppet theater in KChR became possible thanks to the help of compatriots. Association of Abaza public organizations «Apsadgyl» won a grant from the Ministry of National Affairs of the Republic and created a puppet theater. With these funds we bought decorations, lighting devices, and, of course, puppets. They were made according to special sketches that were executed by several artists under the close supervision of Zurab Kopsergenov.

From the roots to yourself

Puppets in the Abaza theater, of course, are «worn» in Circassian coats with stowage loops (slots for patrons sewn in rows from the right and left on a Circassian coat at chest level - ed.). The entire repertoire of the puppet theater consists of performances based on Abaza folklore. The author of the script, the same Zurab Kopsergenov, has been exploring the Abaza fairy tales and legends for many years, because heroes of folk tales often appear in his plays.

Studying the culture of the native people for Zurab is more than a hobby. This is an attempt to find your roots and thus understand who you are. The Abaza are small people in a huge multinational country. And today, the Abaza, while remaining a national minority even in their native Karachay-Cherkessia, are trying to develop and expand their native culture and language. Therefore, the work of the «Amara» theater finds many positive responses among compatriots and all those who wish to learn more about the traditions and folklore of the ancient people.

«Sometimes in a fairy tale you find just a mention, let’s say, of some geographical object. You begin to study and learn that the Abaza once lived there. You discover the history of these places, people associated with them. So through the tales and folklore, I discovered the story of my people,» Kopsergenov shares.

Each performance is prepared in two languages - Abaza and Russian. Art director and actors themselves translate their roles.

«The fact that we play in our native language is one of the success factors,» said actor Zaur Albotov. - All the cartoons that modern Abaza children watch are in Russian, a foreign language for them. And here they are watching a fairy tale in their native Abaza, and immediately get into the story.» 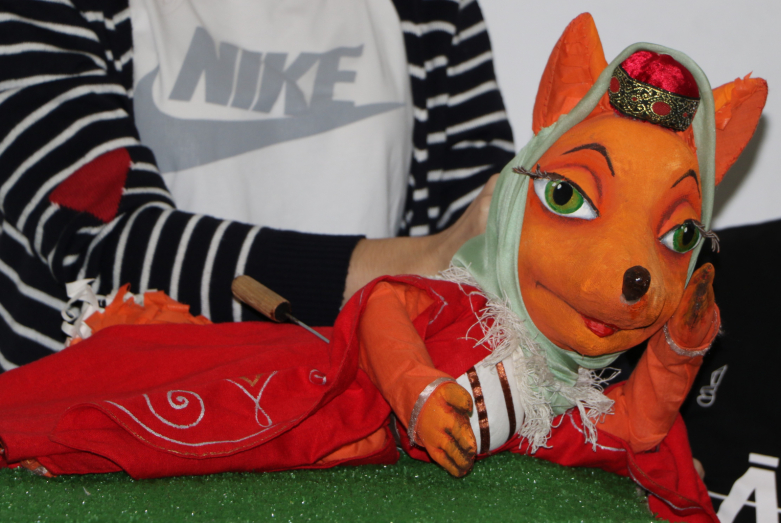 «Puppets are not toys»

Puppet theater is a special kind of art. Even experienced actors accustomed to reincarnations on stage admit that «puppets are not toys,» and it’s not easy to work with them. In a drama theater, an actor can play himself, but here there is an intermediary puppet that always stands between an actor and a spectator. It is equally important for a spectator to accept this.

«We have panel puppets. And this means that the actor is visible on the stage. His work, gestures and facial expressions are visible. At first it surprised our viewers, who thought that we would be behind the screen. But after a few minutes, all of them were already absorbed by the performance itself,» says actress Ratkha Kunizheva.

In general, puppet shows are quite diverse in types. To make it easier to understand the classification of puppet theaters, you can conditionally divide them into «top», «lower» and «middle» ones. Panel puppets are the middle theater. Glove puppets are the top type, and lower puppets are marionettes, controlled from above with the help of threads, rods or wires.

Middle dolls are usually voluminous. They are controlled by puppeteer actors from the side, as in «Amara», or even from the inside, when the actor is inside a large puppet. 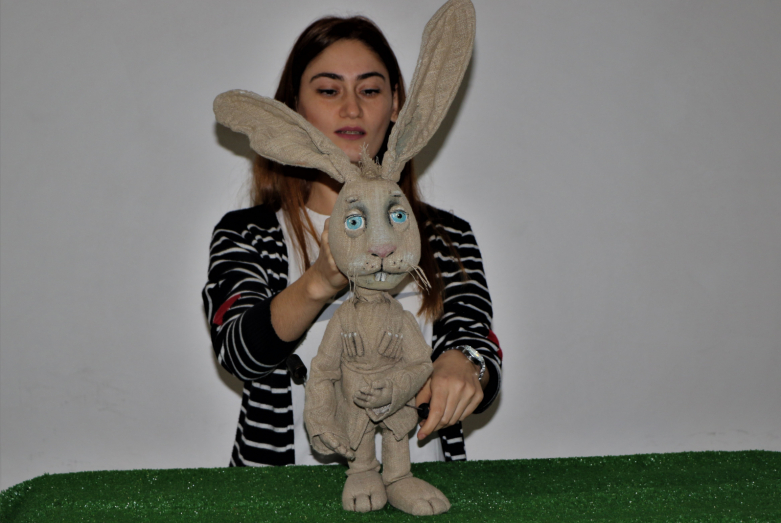 A little bit more about valuable features and frames.

The youngest actor of the «Amara» theater Vitalik Kopsergenov is only 12 years old. His father, who is in the theater the art director, director and screenwriter, introduced his son to art too.

«Of course, he had a choice, I did not force him,» Zurab Kopsergenov smiles. - He likes what we do here. Really, he still thinks of who he becomes.»

The actors of «Amara» do not have their own premises for performances and rehearsals: the drama theater of the republic, the main stage of Cherkessk, is under reconstruction. But the creative team found a way out. Compatriots came to the rescue again, and the chairman of the women's council of the «Alashara» association, Zalikha Malkhozova, gave the actors room for rehearsals in the Psyzh village, not far from Cherkessk. 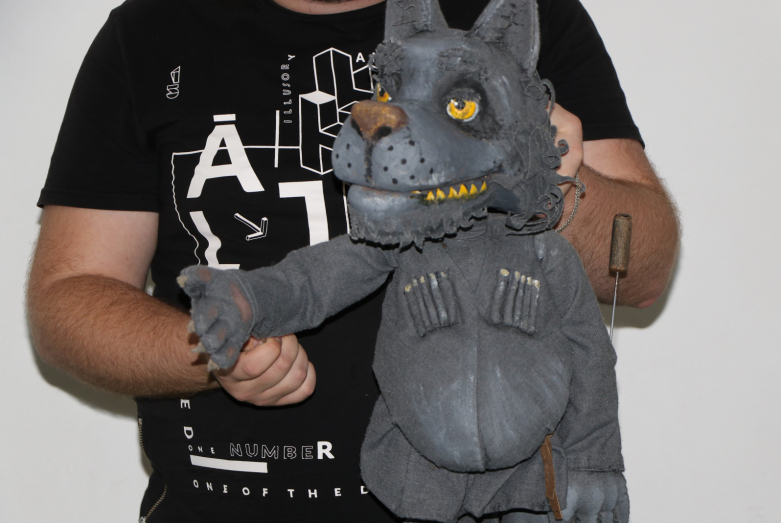 «The lack of our own scene does not affect the work. We are a mobile theater. We can easily go to put the play in any school hall. Neither the work of the actors, nor the scenery or the light will affect it. We can provide the atmosphere of the theater and immersion in the performance everywhere,» explains actor Guram Sheremetov.

Such mobility is a very valuable feature of the puppet theater «Amara», all actors agree. It happened so that the audience in Karachay-Cherkessia rarely goes to the theater. And here, as they say, «if the mountain won't come to Mohammed, Mohammed must go to the mountain.»

The crew goes with joy to people, while doing their favorite thing. The plans of the theater «Amara» is about expansion of the repertoire, touring the Abaza villages, performances in schools of the republic and the Stavropol Region. In the future, the team plans to visit Abkhazia with performances. 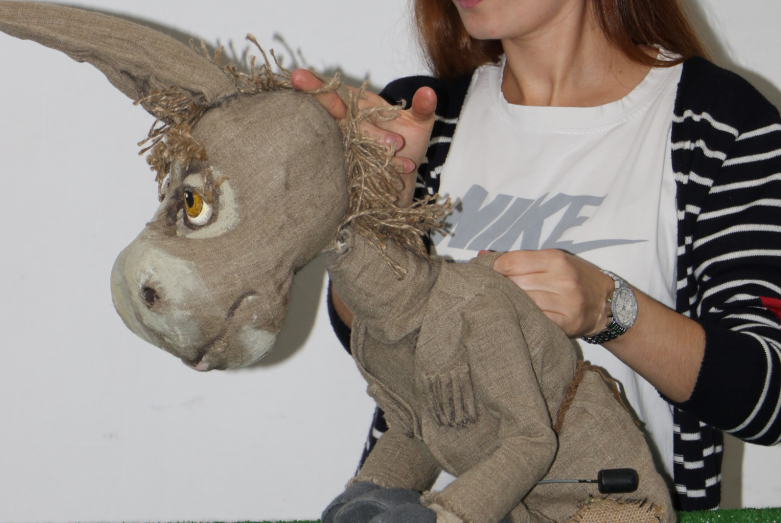 Rehearsal of the Abaza puppet theater «Amara»
© ANO Alashara
KChR Culture
To leave a comment you need
to login or register.
Share
No comments

The number of local branches of the WAC in Abkhazia and Turkey reached 30
The chief ecologist of Abkhazia took part in the work of the WAC Discussion club
“Educate the leader”: the Parents’ club of the WAC held a discussion on how to do it competently

Abkhaz dungeon: the history of the world-famous Novy Afon cave
“Educate the leader”: the Parents’ club of the WAC held a discussion on how to do it competently
The chief ecologist of Abkhazia took part in the work of the WAC Discussion club
The number of local branches of the WAC in Abkhazia and Turkey reached 30
All publications

Abkhaz dungeon: the history of the world-famous Novy Afon cave

Viacheslav Chirikba: Congress aims to unite all representatives of the Abaza people