On July 23, Abkhazia celebrated the National Flag Day, which is widely celebrated annually by the Abkhaz-Abaza people around the world.

Starting from the afternoon, a specially prepared festive car, which was driving around the capital, decorated with the Abkhaz flag, created a special atmosphere in the capital: Abkhaz songs were heard from the car, and it caused many smiles from passers-by. Some gathered around the “loud” car and danced national dances. 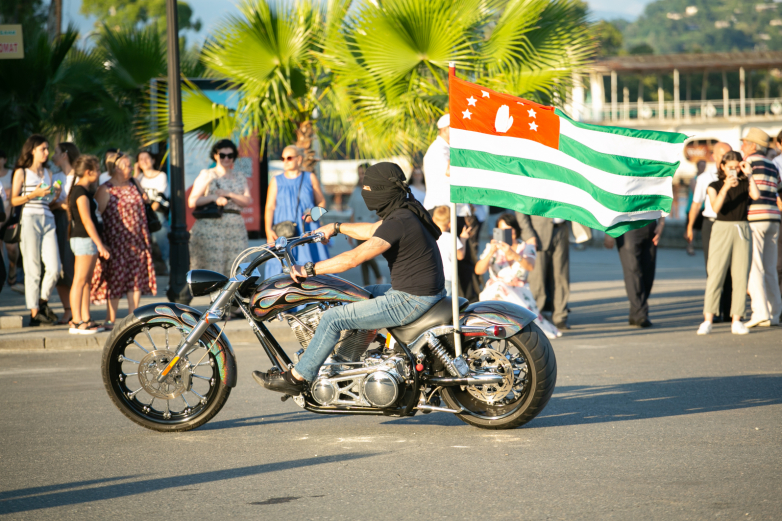 The festive events in honor of the Flag Day began with a motorcycle and bike ride organized by the Moto Abkhazia and Ridebike Apsny communities. Anyone could take part in the races. The participants gathered in the park near the City Administration. Many were holding in their hands the symbol of the Day and Abkhazia - the Abkhaz flag. Joy was upon people’s faces, everyone congratulated each other and wished their Motherland prosperity and a peaceful sky.

Astanda Gabliya, a resident of Sukhum, goes cycling almost every evening. When she learned that it was possible to take part in the festive bike ride, she was “very happy.”

“I think it is very unifying. We are all in a festive mood together. I congratulate everyone on the holiday,” said Astanda Gabliya. 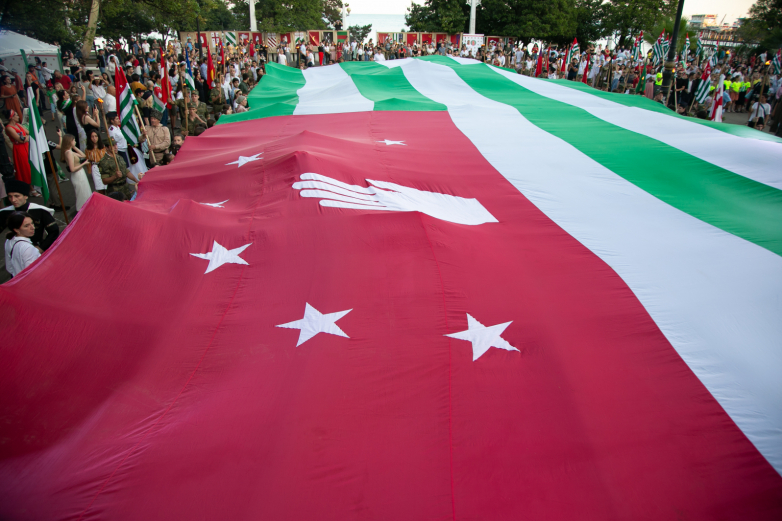 The holiday continued with a concert of the State Choir Capella, which took place at the Samson Chanba Abkhaz Drama Theater. Many residents of Sukhum took the opportunity to attend the concert and were greatly impressed.

“To my shame, I listened to the concert of our chapel for the first time. The performance literally mesmerized me. On such a day, Abkhazian folk songs are perceived with great trepidation,” shared Marlen Dumava.

The march was the key event of the day. People, accompanied by a group of torchbearers, carried a huge - 10 by 20 meters - canvas of the State Flag of Abkhazia along the Makhajirs Embankment.

“It was an amazing feeling to carry our flag together with dozens of people. All these years I have seen photos from such processions, but I have never become a participant myself. I was happy,” said Marianna Papava, a participant in the procession.

On this day, there was also an exhibition of the national symbols of Abkhazia, which were adopted in different historical periods. 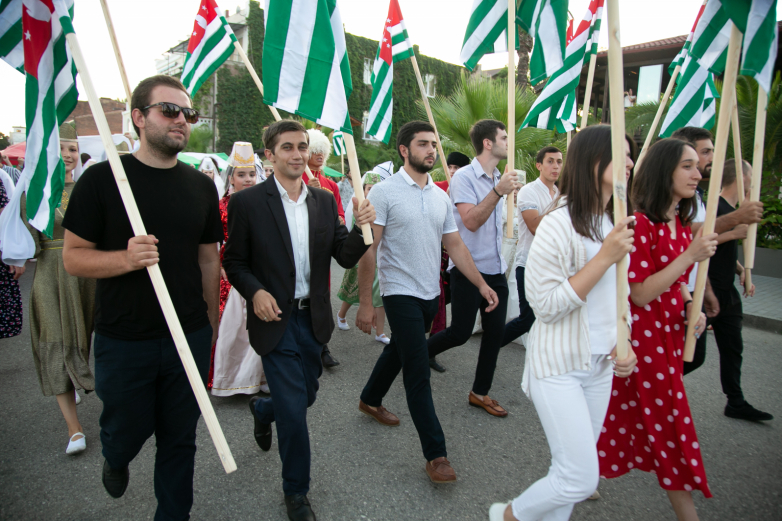 After the procession, everyone gathered in the square in front of the Abkhaz Drama Theater, where songs and dances were organized. The State Folk Dance Ensemble “Caucasus”, the State Orchestra of Folk Instruments named after Otar Khuntsaria and the children's choreographic studio of the State Ensemble “Sharatyn” – “Yairuma” performed before the audience.

The culmination of the evening was the Abkhazian round dance “Aurasha”, in which everyone took part. Acting Deputy Chairman of the State Committee for Youth and Sports David Tsushba noted that the celebration of the State Flag Day “has already become a good tradition.” According to him, a more massive celebration was planned this year, as in previous years, but due to the pandemic, “the plans had to be changed a little.”

“Difficulties unite, and our case was no exception. Various structures helped us in organizing the holiday during this difficult period. I would like to express my special gratitude to the World Abaza Congress and personally to the head of the Women's Councils Geta Ardzinba. It is very pleasant to work with such professionals,” said David Tsushba.

In his opinion, despite the fact that the holiday did not work out the way it was originally planned, the main thing happened - the atmosphere of the Flag Day was conveyed, people united and took part in folk festivities. 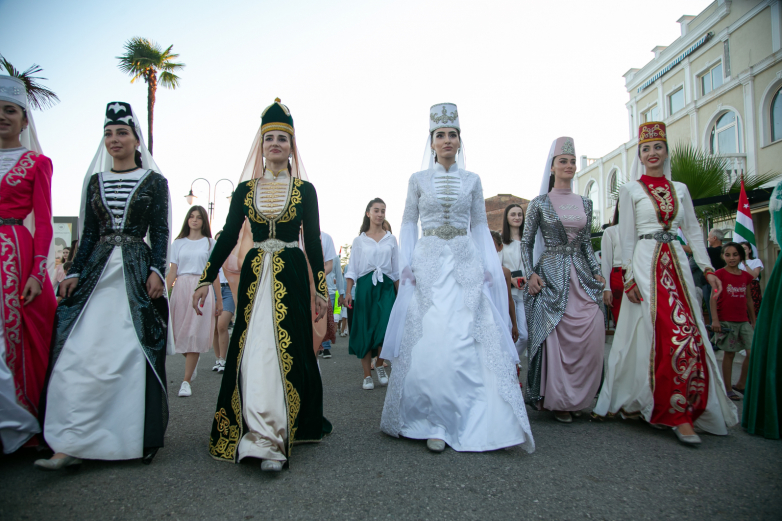 The head of the Women's Councils of the World Abaza Congress, Geta Ardzinba, one of those responsible for organizing the holiday, noted that this day is special for the WAC and for the entire people of Abkhazia.

“This holiday unites all representatives of the Abaza people living around the world, and, of course, is widely celebrated in Abkhazia. It is for these reasons that the World Abaza Congress takes part in this event from year to year,” said Ardzinba.

She said that last year the WAC also organized and initiated the celebration of the National Flag Day.

“Last year we started the tradition of the dance “Aurashia”, it is a dance of joy and unity. The idea of unity runs as a refrain through everything we do today,” explained Geta Ardzinba. 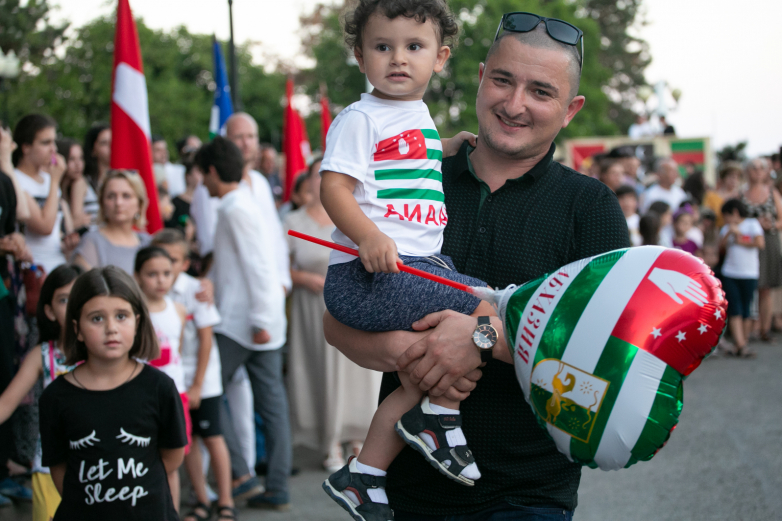 Sandro Bargandzhia came to the holiday with his family from Gagra. He believes that the holidays “at such a difficult time” are especially important for the people.

“We came with children. You can see how happy they are, how they like everything. You rarely meet people in national costumes, and today, fortunately, there are a lot of them. Children will be happy to learn about the flag and national costumes. This is so great. I congratulate everyone on the National Flag Day,” said the guest of the holiday. 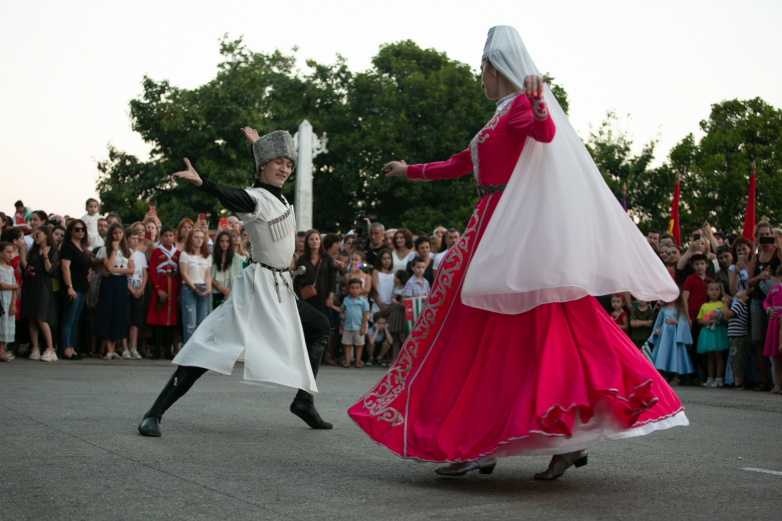 Among those walking and celebrating, there were indeed many children and adults in national costumes. Some children had their faces painted.

Milana Otyrba is 11 years old, she came with her grandfather Anatoly Bartsyts. The girl said that she tries not to miss the Flag Day celebrations. For this occasion, she has a specially tailored national costume. All year long she was waiting for this holiday to put on her favorite dress.

"I love this holiday so much. I was really looking forward to it,” said the young participant of the event. Arda Dzhapua came with her children. She said that her family does not miss the celebration of the National Flag Day for the third year.

“It's always a big event. From an early age my children are interested in the flag, they ask what it symbolizes. They especially like the open palm. Such holidays are very important, they bring up a sense of patriotism in children,” Arda Dzhapua believes.

On Flag Day, as well as at other mass events uniting the people, anyone could join the WAC by filling out a special form. At the end of the evening, 30 people joined the ranks of the Congress.

At the end of the festive program, people did not leave until late at night: they sang national songs, danced folk dances and just socialized warmly. 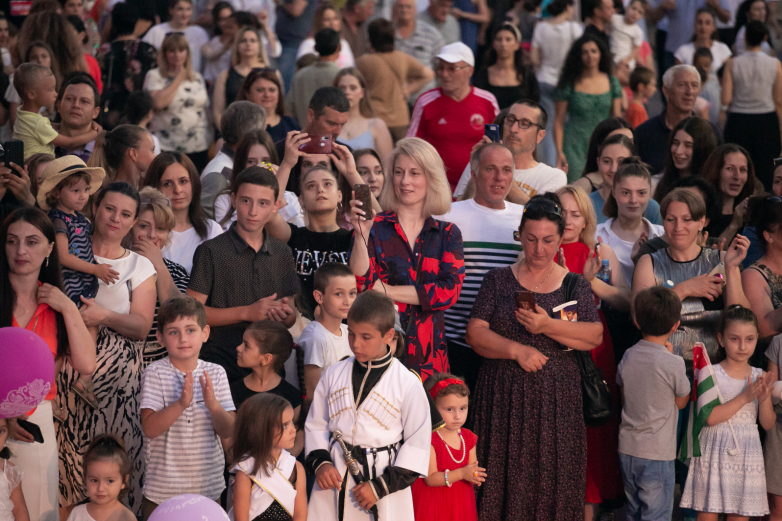 From 41 to 50: We speak Abkhazian / We speak Abaza
Operational Headquarters: 14 new cases of COVID-19 infected in Abkhazia and the first infected from among vacationers
A new reading of Sukhum: projects of “Ҳара ҳақалақь” to transform the capital of Abkhazia

Headquarters: six new cases of COVID-19 infected detected in Abkhazia. The total number of infected people today is 25
A new reading of Sukhum: projects of “Ҳара ҳақалақь” to transform the capital of Abkhazia
Ten new cases of COVID-19 infection detected in Abkhazia
Ministry of Health of Abkhazia: Russian colleagues will assist in the fight against COVID-19
All publications