Chairman of the Women's Coordinating Council under the WAC met with the mothers of the fallen defenders of Abkhazia.

On the eve of the celebration of the 29th anniversary of the victory in the Patriotic War of the People of Abkhazia in 1992-1993, Ekaterina Bebia, Chairman of the Coordinating Council of Women of Abkhazia under the WAC, met with representatives of the movement "Mothers of Abkhazia for Peace and Social Justice". The event was held in the building of the Faculty of Philology of ASU with the participation of the faculty and students of the university on Thursday, September 29.

Members of the movement Zaira Dzhopua-Lagvilava, Tamara Avidzba-Ezugbaya, Emma Yermolova and Lamara Khashba-Kuchuberia came to share memories, tell about the feat of the fallen sons and discuss the importance of the maternal movement, led by the Chairman of the movement "Mothers of Abkhazia for Peace and Social Justice", an honorary member of the Coordinating Council of Women under the WAC Guli Kichba.

The guests and participants of the event honored the memory of those who died in the struggle for the freedom and independence of Abkhazia with a minute of silence, after which Ekaterina Bebia, Chairman of the Women's Coordinating Council under the WAC, greeted the audience. She addressed the mothers and thanked them for the heroism of their fallen sons, and also noted the courage and fortitude of the women themselves.

"Vladislav Grigoryevich Ardzinba spoke eloquently about the courage, strength and self-sacrifice of mothers. He often repeated that Abkhazian mothers were at the origins of the victory in the Patriotic War," shared Ekaterina Bebia.

The head of the Sukhum office of the WAC, Temur Rekvava, congratulated the representatives of the movement "Mothers of Abkhazia for Peace and Social Justice" on the upcoming anniversary of the victory and presented them with memorable gifts - paintings by the artist Garry Dochia, created by the author especially for each of the mothers.

During the event, the guests and participants were shown fragments from films about the heroic women of Abkhazia with archival footage from the life of mothers of the movement "Mothers of Abkhazia for Peace and Social Justice". Watching the chronicle was accompanied by speeches by women, in which they shared their memories and gave parting words to the younger generation.

"Our sons died in the struggle for the independence and freedom of Abkhazia, which their grandfathers and great-grandfathers once dreamed of. The independence of our country is a huge value that you need to preserve," Tamara Avidzba-Ezugbaya addressed the students.

In turn, students thanked the mothers for the meeting and the opportunity to learn more details about historical events and personalities firsthand.

"I would like to thank every woman who shared her memories with us today. You are a role model for us. Your courage and strength inspire us. We bow before the feat of your children and will never forget it," said Khibla Khvartskia, a 3rd year student of the Faculty of Philology.

Dean of the Faculty of Philology Batal Khagush noted the invaluable contribution of such events to the educational process.

"It is necessary to hold such meetings for students and schoolchildren. They must know the history of their country in order to build on the past and avoid mistakes and build a better future. They must see history not only on paper, in a textbook, but also in faces," he said. 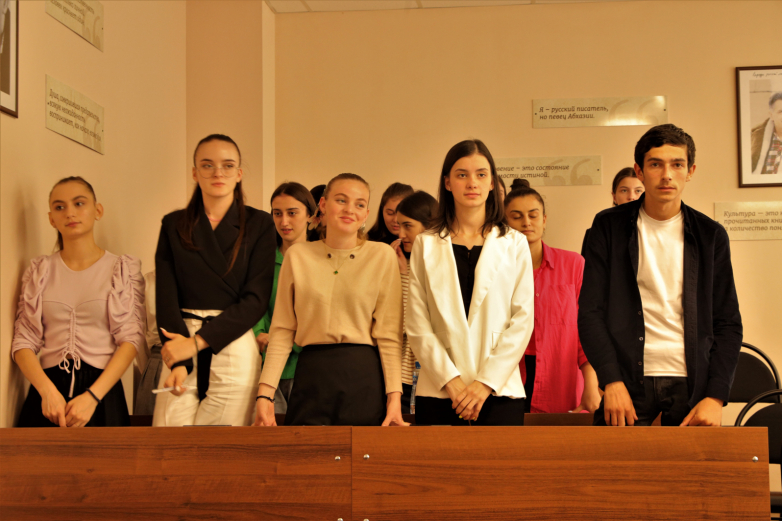 The meeting with representatives of the movement "Mothers of Abkhazia for Peace and Social Justice", organized by Ekaterina Bebia, Chairman of the Coordinating Council of Women of Abkhazia under the WAC, was the first event of the Council, the presentation of which took place earlier this month.