The Circassian Drama Theater named after Muharbek Akov won the federal competition to support young directors, conducted by the Ministry of Culture of the Russian Federation.

The performance "Handful of Land" by the Cherkess Drama Theater based on the competition by Bemurza Thaytsukhov was one of the winners of the contest for young directors, organized by the Ministry of Culture of the Russian Federation. This was reported by the director of the theater Dina Akova.

According to her, this year a pre-presentation was prepared, and its premiere will take place in the first half of the next year, declared in Russia as the Year of Theater. She also added that the troupe plans to tour and play the show outside the KChR.

The action of the novel "Handful of Land" refers to the time of the Caucasian War and the resettlement of the Abaza in the Ottoman Empire in the second half of the XIX century. The author of the work holds two big parallels in it: he describes the difficult fate of a single girl and the tragedy of a whole people.

The director of the eponymous play was Givi Valiev - Honored Artist of the Kabardino-Balkarian Republic and North Ossetia, a graduate of the GITIS directing department. The novel of Bemurza Thaytsukhov was adapted for the production by a young playwright and literary critic Zurab Bemurzov. In his commentary to the WAC web information portal, he noted that it was a difficult creative task.

"When the Circassian Theater named after Mukharbek Akov (Karachay-Circassian Soviet actor - ed.) suggested me to adapt the play for staging, I agreed, but with an internal emphasis on the fact that it is a very important work - to translate or adapt the texts of the masters of the pen. The most difficult prose of the classics is translated into the language of the theater by a few," the playwright explained and added that the writer's dual responsibility in this kind of work is that he is responsible "not only for his turn of phrase, but also for the preservation of the original handwriting." 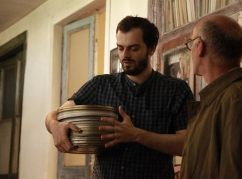 However, Bermuzov admitted that the authority of Thaytsukhov, a writer, and the very subject of the work prevailed over all doubts.

"I, as a descendant of one of the thousands of Ubykh tribes dissolved in history, as well as any representative of the Abkhaz-Adyg people, have always been attracted by the topic of the Caucasian War. Probably, it hangs on each of us with a lifelong debt of pain before our ancestors, which we must somehow pay to our people. I pay with talent and life, which I owe them," said Bemurzov.

He also noted that the whole team involved in the production had done a lot of hard work, because they had to "talk about the past in modern and theatrical language".

"The fact that the theater management decides to take such steps suggests that it sets ambitious development tasks, sometimes with certain risks in the actor-viewer chain. I think that this approach is quite promising," the playwright concluded.

It is not for the first time that the Circassian Drama Theater has become a participant in the projects of the Ministry of Culture of Russia to support young stage direction. The performance of the young director Timur Isupov "The Giant and the Stolen Fire" is still successfully performed on the theater stage, also based on the play by Zurab Bemurzov.

The aim of the competition is to support young stage direction, organized with the support of the Ministry of Culture of the Russian Federation, to assist the domestic theaters in staging new performances with the participation of young theater directors and facilitate the influx of new skilled personnel into theaters.