The second meeting of the renewed composition of the Discussion Club of the World Abaza Congress dedicated to "Apsuara and the dialogue of generations" was held at the press center of the WAC.

The meeting of the Discussion Club of the World Abaza Congress, dedicated to the need to resume the teaching of "Apsuara" lessons in the schools of Abkhazia, was held with the participation of an expert, People's Artist of Abkhazia, musician, conductor, composer Nodar Chanba (he used to be the Minister of Culture and Education of the Republic during the PWPA - ed.).

Nodar Chanba said that, in the position of Minister of Culture and Education, together with a group of Abkhazian scholars and teachers, he did the laborious work of creating a teaching aid for the "Apsuara" subject in Abkhazian schools. According to Chanba, his personal archive contains a detailed school curriculum compiled more than thirty years ago with hourly work plans. However, "Apsuara" is not listed in the schedules of schools in Abkhazia as a subject of teaching. Nodar Chanba considers "a non-conceptual education system" as one of the main reasons for the absence of this subject in schools.

"The loss of the language, the loss of the moral and ethnic code - apsuara is due to the fact that there is no conceptual approach. The program for the development of the Abkhaz language, which is directly related to the development of the "Apsuara", should be dealt with by Abkhazian scholars.  Over the years of my conscious life, I have read and heard a lot about language development programs. Today I am no longer a young man, and the state of the language and the observance of the "Apsuara" are getting worse and worse. This is an indicator that the very concept of the education system is wrong. We have many children who speak several languages. If it is not difficult for them to master several foreign languages, then why does it become a problem for them to speak their native language and know the set of original Abkhazian traditions and customs?  Because the time when all of the above was transferred in families has passed. Now is a different time to follow. Of course, the codification of the subject textbook on "Apsuara" is necessary," he said.

Nodar Chanba also emphasized that a "superficial" attitude to the study of this problem becomes an obstacle in achieving the desired goal. Despite the fact that "Apsuara" is about the moral and ethical principles of the Abkhazian people, it is inseparably connected with universal norms of behavior and ethics. 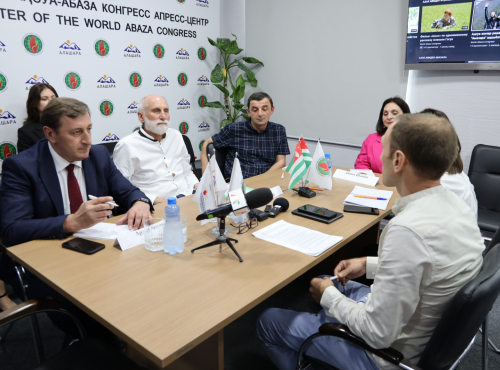 "Apsuara and the dialogue of generations": WAC Discussion club resumed its work

"The Russian word "Abkhazism" leads away from the very meaning of "Apsuara". Because it is not only about ethnicity. It must be understood that "Apsuara" is a concept about a person, a human-forming one," emphasizes Nodar Chanba.

During the conversation, the expert outlined what sections, in his opinion, the textbook on the "Apsuara" subject should consist of and agreed to assist in the work of the Discussion Club group in this direction.

The WAC Discussion Club continues its work. The next meeting will be held with the participation of new experts and will be devoted to the topic of the Diaspora and the repatriation of the Abaza people.