"Dying" and "resurrection" of the heroes of the Abkhazian wedding ritual was discussed by the participants of the lecture as part of the ethnographic cycle of lectures of the WAC.

The lecturer - a member of the Supreme Council of the WAC, the famous Abkhazian ethnologist Marina Bartsyts noted at the beginning of her speech that the traditional wedding ritual of the Abkhazians was an effective way of experiencing by heroes of a real critical life situation.

"As in all rituals of "transition" (in the Abkhazian traditional culture there is a concept of "transition" from one state to another for the most important events in a person's life: his birth, marriage and death - ed.), this transition was possible only through the cessation of premarital existence, that is, "dying". The protagonists are not actually such: they are, rather, passive objects of the ritual. As in the other two rites of transition, birth and death, both heroes are inactive, they are "incapacitated," said the ethnologist.

The Abkhazian bride and groom temporarily "fell out" from society, and the limitation of all their contacts with society was compensated by the fact that these functions were taken over by friends. 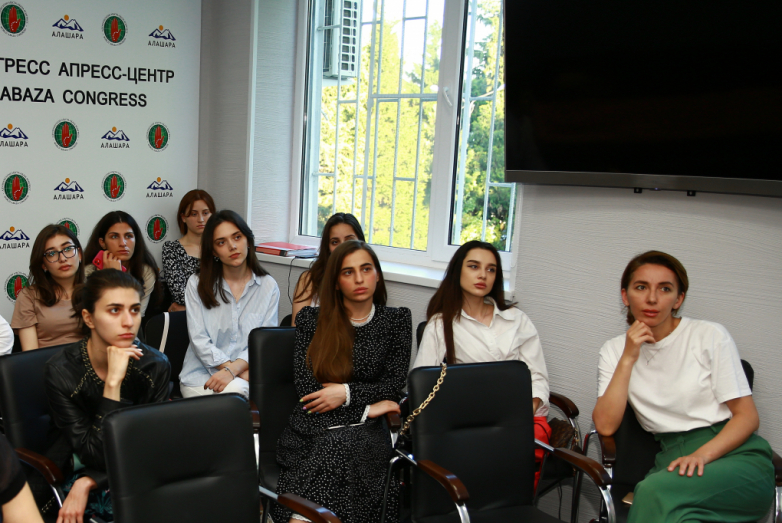 The isolation of the heroes of the wedding ritual began already with the betrothal, at which the bride and groom were often not even present. 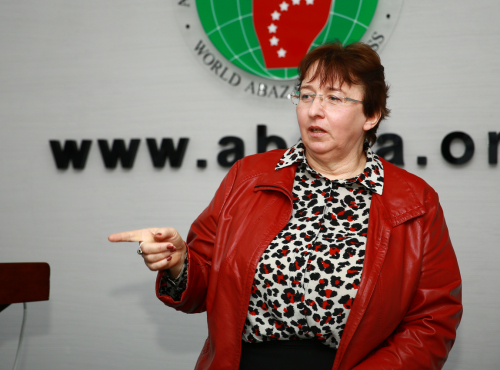 "The living space of the matched bride turned out to be as narrowed as possible," continued Marina Bartsyts, noting that the bride was becoming a stranger to both "worlds": both her former and her husband's new world.

In the cycle of the "transition" of the bride, there was a temporary shelter in a conditionally neutral territory. Any movement during this time was "dangerous" for her. Therefore, in the wedding ritual there is an "overcoming" of artificial obstacles, paving the way with gunshots and with singing special songs.

Marina Bartsyts said that the wedding songs played up the absence of the groom, the closeness of the bride, the possibility of her substitution. Why was this substitution even possible? Precisely because the heroes were in the "marginal" position of the transition, they were as if "nameless".

The theme of the incapacitation of wedding heroes is reflected in many aspects of the Abkhazian wedding.

"Bride's pose", as defined by the scientist Albert Bayburin, symbolizes the heroine's temporary inability to move independently. They lead her, with magical rites, they lead her into a room and put her in a corner. The bride behaves as if she does not hear, speak or even see. Her arms are folded, her head is down, her eyes are down. The exposed parts of the body - the face and crossed hands - are covered with a long, formerly black, veil, which served as a "protective" role of the wedding veil," said Marina Bartsyts.

According to her, the bride's face could be seen for a token charge.

The groom, in turn, was hiding, he was not a part of the wedding procession. During the wedding, the groom was in a separate room with friends, he did not have to show emotions, but had to be restrained in all manifestations: conversation, food. Moreover, he was not supposed to dance, sing, have fun. The heroes of the wedding ritual were considered to be in a foreign space, "in the forest". 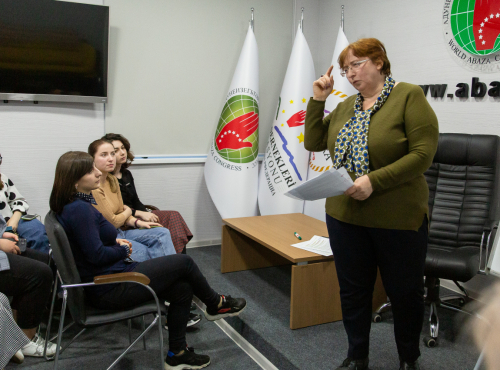 The wedding cycle ended with a post-wedding ritual of return of the heroes with the formation of a new look: a change in hairstyle, changes in clothes, the name of the bride.

"The consistent expansion of living space began with the ceremony of bringing the bride out of the "wedding house" to the "big house". With the help of the ritual, the bride received the patronage of the "family deities" of the house where she will be the hostess," Marina Bartsyts told about traditional beliefs.

With each lecture of the ethnographic cycle of lectures of the WAC, the number of participants is increasing. This time, as in the past, the audience was overcrowded.

Kama Smyr came at the invitation of the head of the WAC Women's Councils Geta Ardzinba.

"I watched live broadcasts of lectures (all lectures are broadcast live on the WAC Facebook page - ed.), and I was very interested, because such information is heard that is rarely found in books. I am definitely going to attend lectures whenever possible," said Kama Smyr.

Another listener, Inessa Tarba, believes that "it is extremely important to hold" such lectures, first of all, and secondly, it is necessary to attract more young people, "so that they do not lose their own culture". 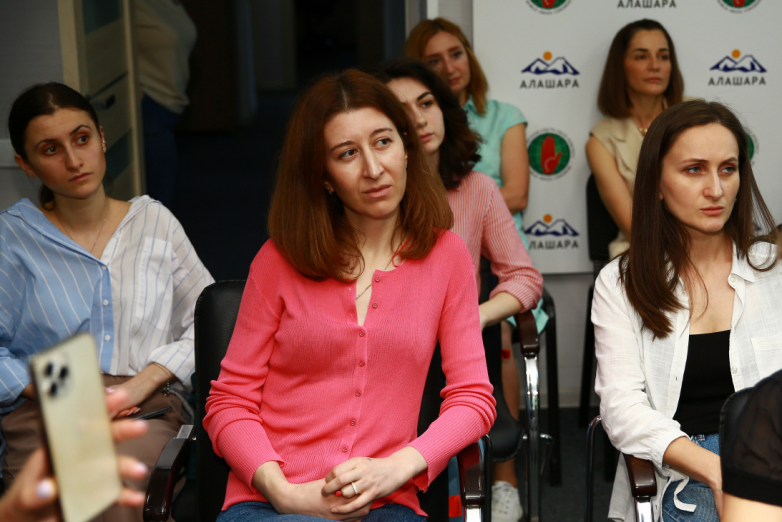 "I knew a lot, as I was interested in our culture, but even so I obtained a lot of new information for myself," she said.

Cecilia Chichba, a teacher of German language and cognitive linguistics at the Abkhazian State University, believes that such lectures should be held in a wider format.

"When we listened to Marina, who was talking about a bride who "died" for a past life and is "reborn" for a new one, like a Phoenix, I wanted to cry. Because it is like you ... have forgotten yourself.  You sit, listen and begin to feel how the genetic memory wakes up. Sometimes I even got choked. It's very emotional," Chichba shared.

Artist Anna Sangulia regrets that the older generation now does not properly transfer knowledge about the customs, culture and national values ​​of the Abkhazians to the younger.

"We (the older generation) are to blame for the fact that young people receive less. They are ready to receive all this, to know all this. In this context, the WAC lectures fulfill a very important mission. We understand that we have traditions, we understand how ancient our people are, what layer of culture we have," she said.

Other lectures are planned within the cycle; anyone can attend them. Information about the next lecture will be available on social networks of the World Abaza Congress.

A grand ethno park opened in Abkhazia
Иарбан? Иаба? Ианба?: the story of how the WAC organized a unique game
WAC delivered medical equipment to a rehabilitation center in the Gagra district

Иарбан? Иаба? Ианба?: the story of how the WAC organized a unique game
A grand ethno park opened in Abkhazia
All publications

Making of ashamaka: technology in detail