Representatives of the World Abaza Congress on December 24 installed in the village of Baslakhu 71 plaques with the names and quotes of famous and young writers of Abkhazia.

The World Abaza Congress team installed plaques with the names of writers in the Park of Abkhazian Writers in the village of Baslakhu on Saturday, December 24.

The head of the Women's Councils of the WAC, Geta Ardzinba, told about this project. She noted that the idea of ​​the project belongs to the Chairman of the Supreme Council of the Congress Mussa Ekzekov. 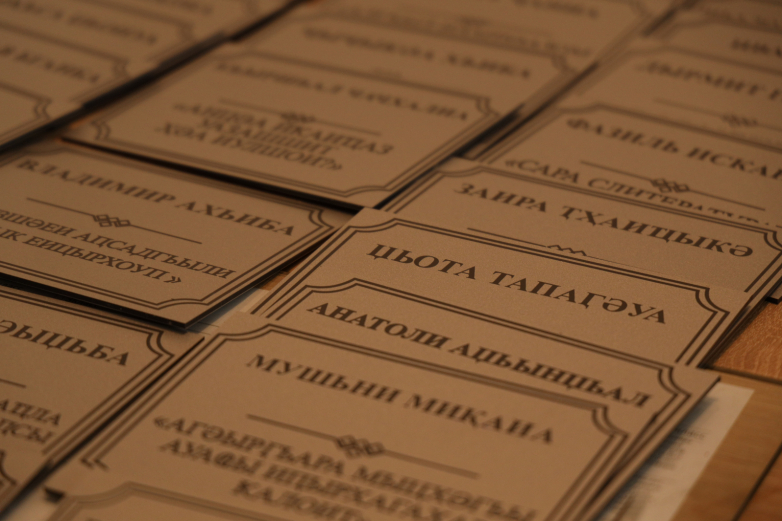 "This spring, Mussa Khabalevich visited the village of Baslakhu. We were given a very warm welcome at school, an interesting conversation took place, during which the idea came to renew the signs on the trees," Ardzinba shared the details.

She said that there is a unique park where grow the trees planted by writers, so far only in one Abkhazian village, but the WAC is ready to help other villages interested in this project.

"We hope that the heads of the local branches of the villages will see our project and offer their participation. We will come to the village where there are young people who are ready to select quotes, and we will carry out the same work," she added. 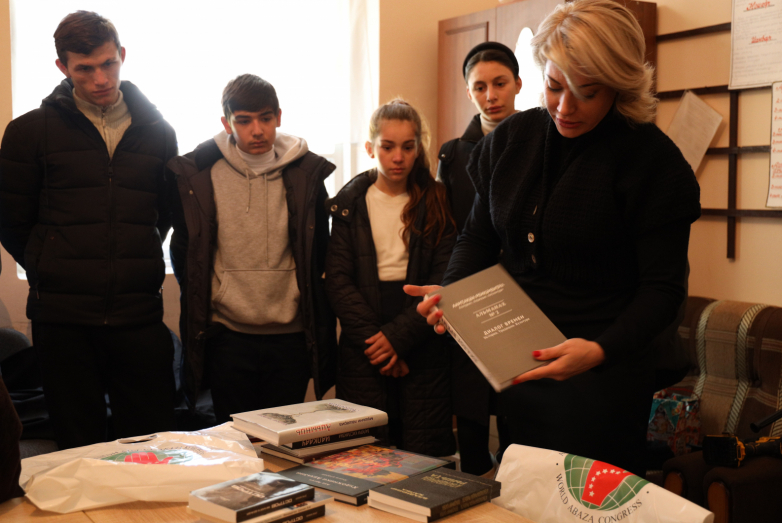 Baslakhu park's traditions are about half a century old. Every year the park expands the alley of named trees. The WAC team decided not only to change the old plates with new ones, but also to add quotes from the authors’ works to them.

"We asked the students of the school to carry out work on the selection of quotations. For a month and a half, the youth was engaged in this project, the students went to the Ochamchira library, chose books, quotes, discussed them, interesting work was going on. Of course, the alley will expand, new trees will appear, which means that the project will continue," said Geta Ardzinba.

Valery Berzenia, the coordinator of Local Branches and Youth Activity, assures that the plates are made of multicomponent composite which is of high quality and will last long. Work on the manufacture of plates, with the expectation of a durable result, was carried out within more than six months. 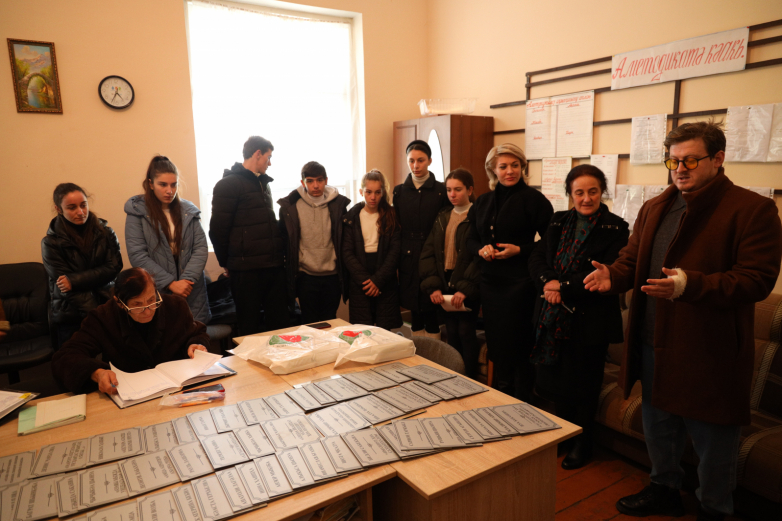 "We tried to make the plaques durable so that they last longer for the good of the school. We have done a long and conscientious work, because this is our common good cause. We would like to thank the students, their teachers and parents for helping to implement this project," said Berzenia.

The curator of the project, biology teacher Inga Ablotia, noted that it was very important to approach the project carefully and from the point of view of ecology.

"Trees, like the entire nature, are alive, they grow, and therefore we cannot hammer nails in them," she added, explaining how the signs are attached to the trees - they were attached using special twines that will not injure the trees.

A graduate of the Baslakhu school, now the head of the administration of the village Daur Pagava, expressed gratitude to everyone who took part in the implementation of the project, and personally to Mussa Ekzekov. 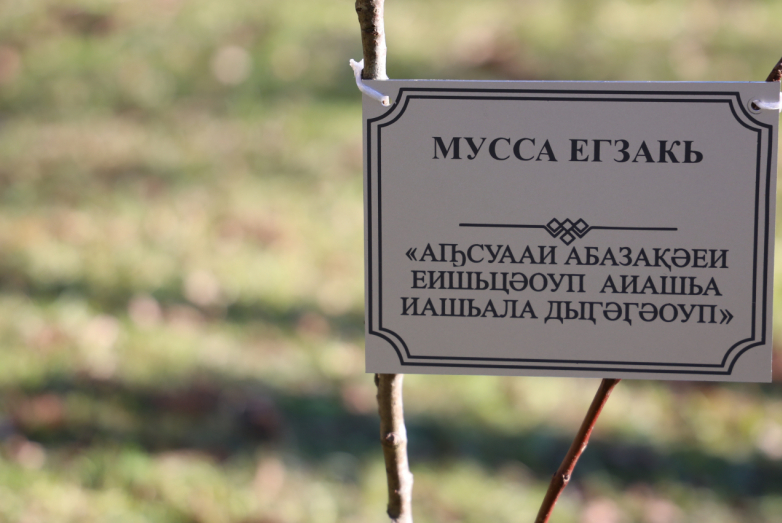 "Thank the World Abaza Congress for such a project. This is a New Year's gift for us and for the school," Pagava said.

High school students remembered that, having received the assignment back in the spring, they happily got down to business. The principle of selection of quotes was that the meaning of short excerpts from the author was clear to future generations.

Seventh grader Mramza Vouba noted that the quotes were not easy to choose.

"We worked in the methodology department of Abkhaz language and literature. During the work, we studied the material, argued, came to a common opinion. We liked this creative work, thanks to the organizers," thanked Vouba.

School headmaster Asida Pachulia listed the names of the writers who planted trees in the unique park at different times. These are Terent Chania, Platon Bebia, Neli Tarba, Sarion Tarkil, Anatoly Adzhindzhal and many others. The relationship between writers and students continued even after the tree planting: they corresponded, sending letters to each other.

"Letters from writers came to us, were solemnly read out at a literary circle, this approach encouraged children to try themselves in poetry and prose. This is still practiced today," said Pachulia.

During the installation of the signs on the trees, high school students cited aloud their favorite writers. 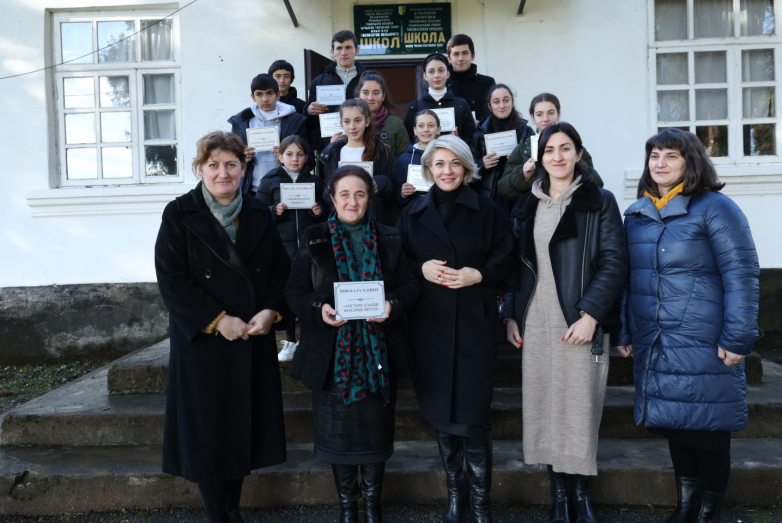 In March 2021, as part of a working visit to Abkhazia, the Chairman of the Supreme Council of the World Abaza Congress Mussa Ekzekov visited the village of Baslakhu. The meeting took place at the Chichiko Khiba Baslakhu Secondary School. There the decision was made to replace the outdated signs on the trees in the Park of Abkhazian Writers. Most of the trees in the unique park were planted by writers and famous guests of the school with their own hands. Mussa Ekzekov also planted two trees in the school park with his own hands: a fir-tree and a pear.