WAC began to cooperate with the Museum of Anthropology and Ethnography of St. Petersburg

The World Abaza Congress and the St. Petersburg Museum of Anthropology and Ethnography (Kunstkamera) signed a cooperation agreement.

The World Abaza Congress began cooperation with the Peter the Great Museum of Anthropology and Ethnography (Kunstkamera) of the Russian Academy of Sciences (MAE RAS - ed.) of St. Petersburg. The cooperation agreement was signed on Tuesday, June 29, by the Chairman of the Supreme Council of the WAC Mussa Ekzekov and the Head of the MAE RAS Andrey Golovnev.

At the meeting, which took place in the museum, the Chairman of the Supreme Council of the World Abaza Congress expressed gratitude to the director and staff of the Kunstkamera for cooperation.

"I would like to say special thanks to the senior researcher of the Caucasus Ethnography Department of the Kunstkamera, Candidate of Historical Sciences Makka Sultan-Gireevna Ablogachieva, thanks to whom our acquaintance with the museum took place. During the year we have been actively working on joint projects and preparing to sign an agreement. I am sure that all the outlined plans will be put into practice in the best possible way and will be useful for preserving the historical memory of the peoples of the Caucasus and the development of Russian culture," said Mussa Ekzekov.

The Head of the Museum Andrey Golovnev, in response, thanked Mussa Ekzekov and promised that his personal scientific acquaintance with the peoples of the Caucasus would begin with the Abaza.

Andrey Golovnev also expressed a desire to learn more the history of the World Abaza Congress.

What was agreed on

The WAC will provide all-round support and assistance to the staff of the MAE RAS participating in the project "Indigenous Minorities of Russia: Ethnocultural Projections" during field research in the region. The Congress and the Museum are planning joint expeditions. 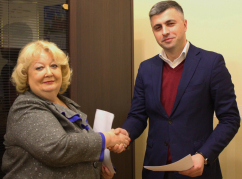 WAC and the House of Nationalities of St. Petersburg signed a cooperation agreement

The agreement also provides for the participation of representatives of the Congress in the organization and work of the "Caucasus - the crossroads of cultures" seminar with the involvement of the scientific elite to highlight the issues of the small peoples of the Caucasus.

Joint work will be carried out to identify and collect materials for the organization of the mobile exhibition "Abkhazians and Abaza in photographs of the XIX-XX centuries."

The museum will take part in the production of a photo album timed to coincide with the Convention of the World Abaza Congress in 2022.

The WAC will assist in the signing of an agreement between the Abkhazian State Museum and the MAE RAS.

Joint work will take place in the preparation of the "Abaza" volume, in the "Peoples and Cultures" series.

The first steps to implement the outlined plans for cooperation are scheduled for the near future.