WAC filmed a documentary about the "Abaza" freestyle wrestling club

The WAC web info portal shot a documentary about the "Abaza" freestyle wrestling club in honor of the tenth anniversary of the club's creation.

The World Abaza Congress made a documentary about the Abaza freestyle wrestling club, which turned 10 years old in 2021.

The film is about the history of the club, established by the Chairman of the Supreme Council of the WAC, known in Abkhazia and abroad as a philanthropist Mussa Ekzekov, about the prerequisites for creating the club and plans for the future.

The documentary was filmed in places associated with the activities of the club, its founders and numerous athletes involved in it. Filming process took place in Moscow, Naro-Fominsk, St. Petersburg, Sukhum and Gudauta. The film consists of various stories of Abkhazian athletes. It shows how difficult the path of an athlete can be as well as the role his coach and the club, he trains in, play in his life.

The founder and President of the club, Mussa Ekzekov, noted that doing sports from childhood forms qualities in a child that show him the most effective way to achieve the highest goals. These qualities and skills help to respond correctly to any challenges of life and overcome them with confidence.

"Relationships in the wrestling sections between the coach and students are very similar to the relationship between fathers and children. Such qualities as respect for each other, self-confidence, striving for victory, discipline, love for the native land and traditions are instilled in the sections, and, of course, it improves your health," Ekzekov said.

The President of the club noted that doing sports allows a person to boldly look into the future and take care of the work and achievements of other people. Systematic sports "smoothly bring all spheres of life in order". A harmonious and spiritual development of a man takes place, he believes.

"As a result, an athlete becomes successful outside the training hall in personal matters, builds a healthy family, and, accordingly, makes a significant contribution to the successful future of the country as a whole," summed up Ekzekov.

He expressed the hope that the WAC was able to convey this success formula to the audience through a documentary about the club.

"We're learning new things every day, so we are confident that the next film will be better," he said.

According to Mussa Ekzekov, the main expectation from the film of the team working on the project is that even more parents will send their children to do sports. Ekzekov is sure that everyone who wants a bright future, harmonious development for his or her children will use the film’s "success formula".

"Using the example of wrestling, we have demonstrated a general model of human development for achieving success in life and we recommend choosing the sport that you like best," he said.
Speaking about the "Abaza" freestyle wrestling club, the Chairman noted that over the 10 years of the club's existence, the athletes who trained in it have achieved great sports results at the world, European, Russian, and Abkhazian championships.

"Many have become masters of sports and masters of sports of international class, there are real role models that the younger generation of athletes looks up to. Thousands of children have chosen the path of harmonious development, and not a senseless loiter on the street, which leads to many sad consequences for both the individual and society as a whole. Of course, successful athletes have a positive impact on their social circle and on other guys who have not yet decided to change their lives for the better, but they will definitely do it," Ekzekov believes. 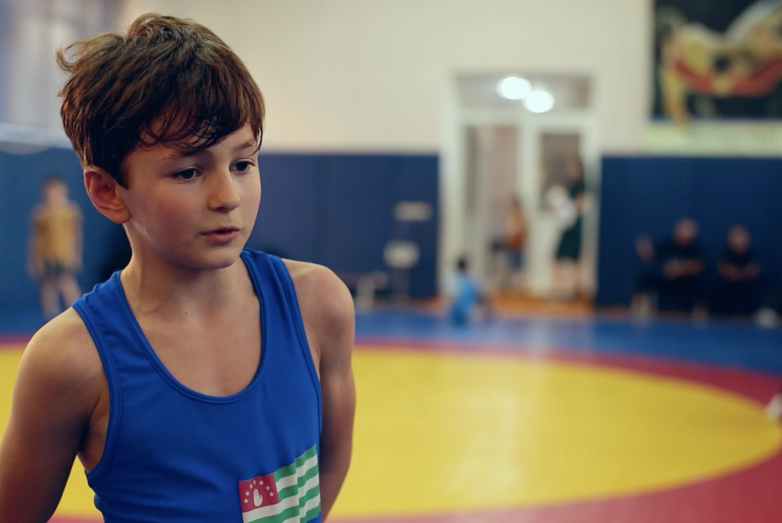 A shot from the documentary film "The Way of Abaza"
© WAC

The team of the information web portal of the World Abaza Congress, headed by the head and editor-in-chief Amina Lazba, worked on the creation of the film.

The videographer of the information portal Ilona Khvartskia directed the film. She said that work on the film began in August 2021, and a few months later, at the end of December, it was ready.

"During this time, we have recorded interviews with coaches and alumni of the club in Abkhazia, St. Petersburg, Moscow, Naro-Fominsk [Moscow region]. The task was to familiarize the audience with the history of the "Abaza" club, tell the stories of coaches and students and show the prospects of freestyle wrestling," Khvartskia said.

The director of the film noted that the film is built on the stories of the characters themselves - more than 20 stories came out.

"We worked with a small film crew. It was a useful and interesting experience for everyone. I was impressed by the purposefulness of the club's students, especially children, their inner strength and confidence," said Khvartskia.

The host of the film is the journalist of the WAC information portal Said Bargandzhia.

"I am happy that in my life there is such an amazing experience as a documentary film about the "Abaza" club, which we shot under the guidance of our editor-in-chief Amina Lazba," the journalist shared.

In his opinion, the WAC team managed to "sink into the world of Abkhaz freestyle-wrestling" and meet a large number of bright people, each of whom has a very interesting life experience.

He also said that he was especially glad to interview the Chairman of the WAC Supreme Council, the founder and President of the "Abaza" club, Mussa Ekzekov.

"Of course, as a journalist, it was especially pleasant for me to interview Mussa Ekzekov. We had two working days of shooting, and I was lucky to ask many questions on completely different topics. This was my first communication with Mussa Khabalievich in such a format, and after that, of course, I was inspired, and most importantly, motivated to achieve [success], develop," the journalist noted.

The cameraman of the film was the press photographer of the WAC information portal Naala Avidzba.

"I enjoyed working on the film. We are not spoiled by work in any kind of cinema - neither in art, nor in documentary, nor in journalistic, nor in advertising. Therefore, any work of such a plan is always useful and interesting to me. This was a work in a new team, with which we have not shot a movie [before]. I felt the unity of our team. All participants were interested, the work process was very pleasant," Naala Avidzba shared her impressions.

What she remembers most is the "feeling of this new world" that she touched.
"For the first time I plunged into the sports world and into communication with people who have high results in this type of activity," Avidzba explained.

The "Abaza" freestyle wrestling club has done a great job over the decade of its existence. To date, 32 coaches pass on their skills to athletes in the club throughout Abkhazia. For 10 years, the "Abaza" club has released more than 3,000 students. Today, 648 students aged 5 to 16 train at the club. In all regions of Abkhazia, sections of the club are open and function. There are 16 students outside of Abkhazia. About 70 million rubles have been invested in the maintenance of the club and the development of wrestling in Abkhazia over 10 years.