Representatives of the WAC delegation led by Mussa Ekzekov during a visit to Jordan held a final meeting with the families of the Abaza clan in the Hashemite kingdom of Jordan.

The WAC delegation, led by the Chairman of the Supreme Council of the Congress, Mussa Ekzekov, held a meeting in Amman with families of the Abaza clan of Jordan, which concluded the visit of the WAC to the Hashemite Kingdom of Jordan.  During the meeting, members of the Congress and representatives of the Abkhaz-Abaza ethnic group in a relaxed family environment were able to discuss joint plans for the future, tell each other about how the Diaspora lives in Jordan, and how Congress is establishing relations with compatriots abroad. 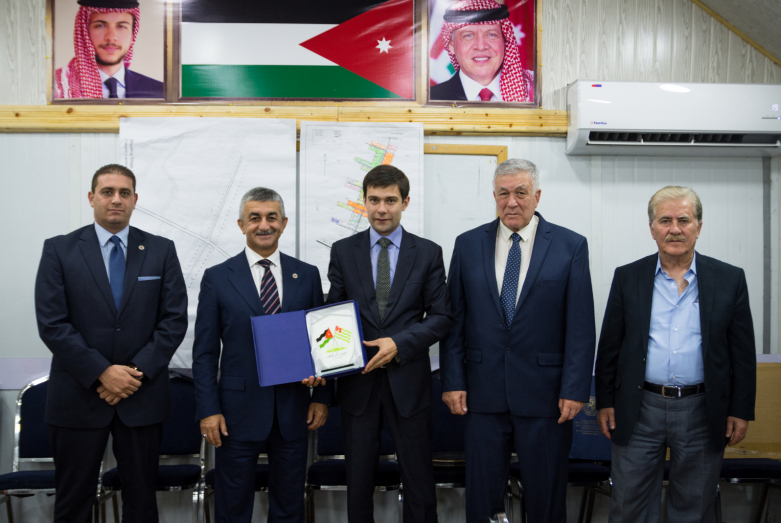 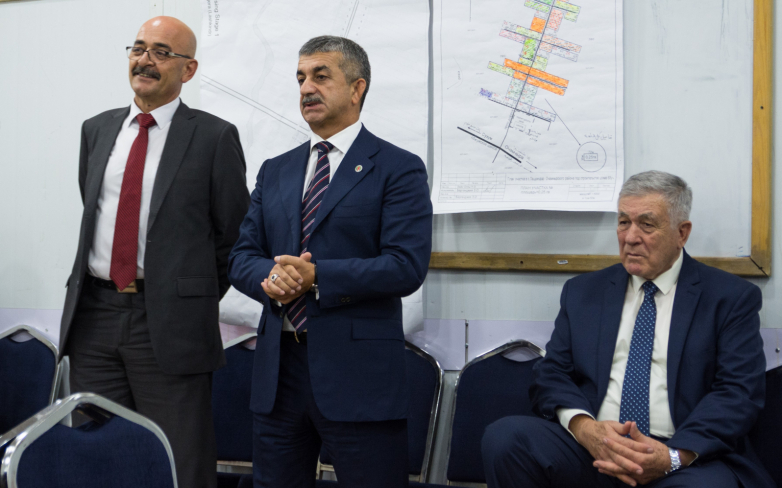 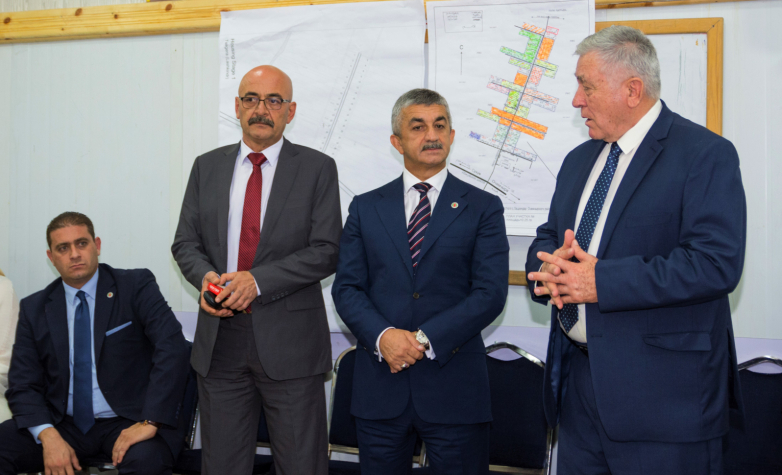 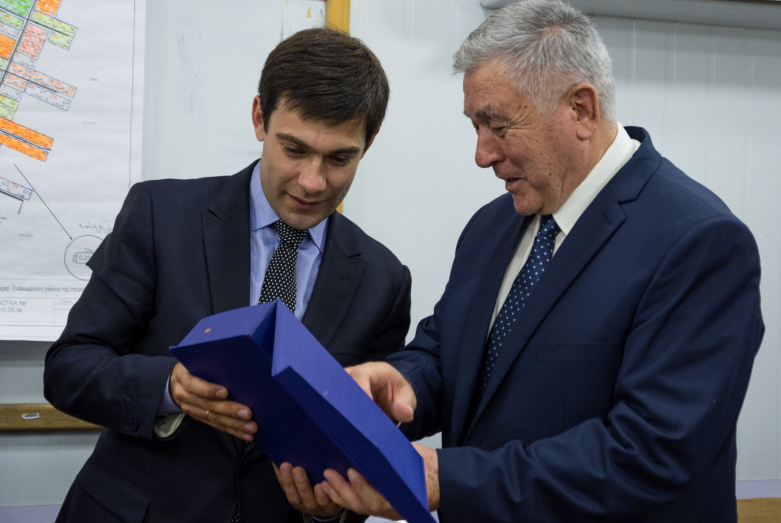 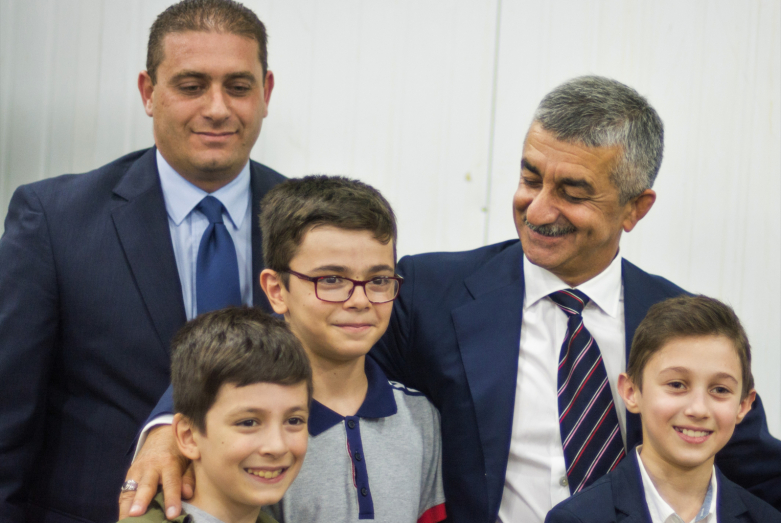 The event was held in the reception hall of the Circassian Charity Association (CCA).  Opening the evening, the chairman of the CCA, Dzhanbek Zukhdi, noted that the Circassian organization was ready to cooperate with the Congress on the development of relations with the Abkhaz-Abaza Diaspora of Jordan, since the members of the public organization “Diwan Abaza” are also active members of the CCA.

The head of “Diwan Abaza”, Hasan Abaza (Chichba), in turn, expressed his readiness on the part of the organization headed by him to support the activities of the WAC in Jordan.

“We are ready to support the World Abaza Congress and Mussa Ekzekova in all endeavors and hope that he, as the head of the Congress, will achieve all the goals set,” said Hasan Abaza (Chichba).

Mussa Ekzekov, Chairman of the Supreme Council of the WAC, addressing the audience, noted that the meeting turned out to be especially “sincere”, touching feelings.  As a conclusion that he made as a result of the trip as a whole, he noted that the Abkhaz-Abaza Diaspora in Jordan is “deeply integrated into the life and work of the Circassian Diaspora of the country”, which allows the two Diasporas to preserve their own culture and traditions together. 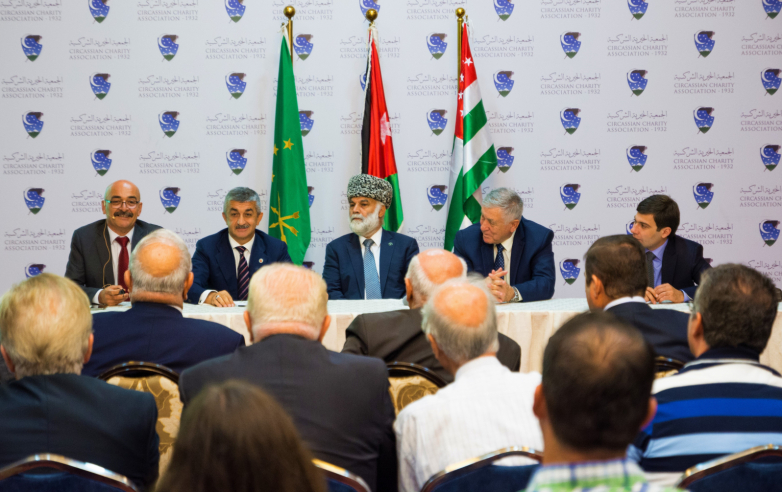 “It would be impossible to preserve customs and traditions in Jordan if there were no support from the country's authorities and if comfortable conditions were not created [for this].  I want to thank the King of Jordan for such an attentive attitude and thorough support to all Circassians, Abkhaz and Abaza.  I’m hoping you (on the part of the Abkhaz-Abaza Diaspora - ed.) feel likewise, and the Government sees in you people who thoroughly support its course,” said Ekzekov.

The head of WAC highly appreciated the work of the Circassian “Nart TV”, the office of which he had visited earlier. This online channel frequently posts video materials about Abkhazia, which are periodically shown to users (based on the results of the meeting, materials of the WAC web information portal will also be posted there - ed.)

In a conversation with families, Ekzekov emphasized the importance of the direct participation of the Diaspora in the work of the WAC in all countries of its residence.  He spoke about the goals of Congress and how they can be achieved.

“Our task is to do everything possible to sustainably develop Abkhazia, and for this we need the efforts of each of us (representatives of the Abkhaz-Abaza ethnic group - ed.).  We have experience in creating regional branches of the Congress, Youth and Women's Councils in Abkhazia and Abazasha, where programs are implemented in the cultural, scientific, educational, sports and social areas.  And people there on their own quite dynamically change their environment and living conditions.  This system allows you to change the consciousness and mood of people.  There is a belief that when we are together, we can do everything, because a person who is set up for creation ultimately always finds ways to fulfill his dreams,” said Ekzekov.

The head of the Supreme Council of the WAC noted that during the trip to Jordan, after talking with people and all the meetings held, the delegation of the Congress had a powerful impetus for more active and close work with the Diaspora.

As one of the main ways of communication and information exchange, Mussa Ekzekov singled out the official information portal of the WAC, which began work in September last year.

Izolda Khagba, the managing editor of the information portal, made a detailed presentation of the Congress website and spoke about the opportunities that it presents to readers.

“Six languages ​​in which the portal broadcasts allow you to “talk” with Diasporas in the language of their country of residence.  It is important for us that the information that our readers receive about the activities of the Congress, about cultural and sports events, about the history of the people, about the life of our compatriots around the world is as clear and accessible as possible. Registered users have the opportunity to comment on materials, find compatriots in other countries, share contacts and information.  You can also download the application form for joining the Congress on the website, which you can then send to the specified address,” said Khagba.

Everyone who came to the meeting showed genuine interest in the work of the Congress, in the opportunity to become its members.  Guests of the event were interested to know what the Congress logo symbolizes, how the Congress interacts with the official authorities of Abkhazia, what are the opportunities for establishing economic relations between Jordan and Abkhazia, and much more.

Young people expressed a desire to assist in the work that the WAC will do in Jordan.

“Tell us: what can we do to promote the work of the Congress in our country?  We understand how important it is for young people [to get involved] and develop ties with their historical homeland.  The future is about young people, and we are ready to stand next to you!” said one of the representatives of the Diaspora, a young man, Maher Abaza.

Mussa Ekzekov replied to this, that he always emphasizes the importance of involving youth and children in various projects.

“To solve the problems of youth, you need to understand what the problems are.  To do this, you need to talk with young people.  A Youth Council should be created of the most active community representatives in Jordan.  Together we will write programs to solve existing problems, together we will write a program for your future.  The closer we interact, the more effectively the issues will be resolved,” said Ekzekov.

After the official part, the participants of the event did not want to leave for a long time: there were many additional questions, people exchanged contacts, expressed hope for further meetings, took pictures for memory. 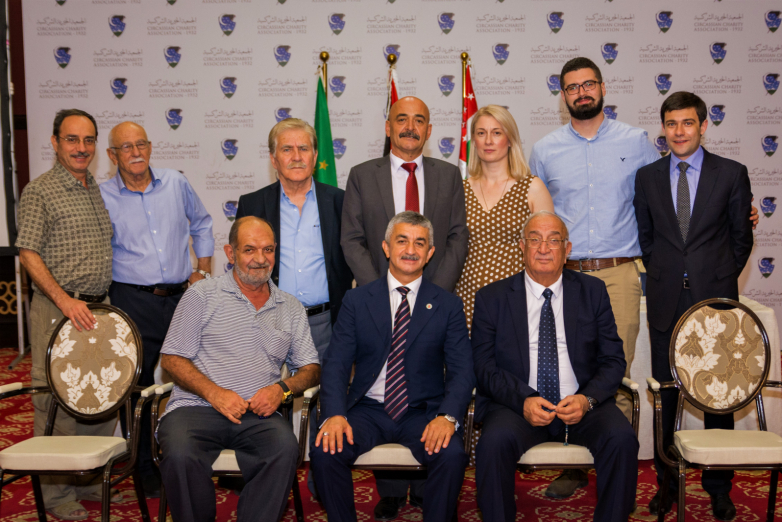 A memory photo following the meeting of the WAC delegation with the Abkhaz-Abaza Diaspora of Jordan, August 26, 2019
© Omar Dzhatkar (Arutaa)

Earlier, as part of the visit to the Hashemite Kingdom of Jordan, which was held from August 24 to 27, the WAC delegation headed by Mussa Exekov held other meetings.  In particular, meetings were held with representatives of the Abkhaz-Abaza Diaspora in the office of the “Diwan Abaza” public organization, with public and political figures of Jordan - Vice-Chairman of the Senate of Jordan Munir Soubar, co-founder of the Jordanian Circassian Youth Association and deputy of the House of Representatives of the People’s Assembly (Parliament) of Jordan Mansour Seyfeddin Murad Szhazh, with the leadership of the “Al Ahly Club” sports club. The delegation also visited the Amman Circassian school, where representatives of the Abkhaz-Abaza Diaspora of Jordan study, learned about the work of the Circassian online channel “Nart TV”, which tells the whole world about the life of the Circassian Diaspora in Jordan.

A memory photo following the meeting of the WAC delegation with the Abkhaz-Abaza Diaspora of Jordan, August 26, 2019
© Omar Dzhatkar (Arutaa)

The visit of the WAC to the Hashemite Kingdom of Jordan is included in the schedule of foreign trips of the Congress leadership for 2019, which was approved by the members of the Supreme Council in 2018.  Until the end of this year, the WAC also intends to visit Syria, Germany, Holland and Turkey.