55 destinies: a book of childhood memories of the PWPA was published at ASU

Historian Saida Vozba has collected in one book 55 stories of people who survived the Patriotic War of the people of Abkhazia when they were children.

A book of memoirs of people who survived the Patriotic War of the people of Abkhazia in childhood was published in Abkhazia. This collection of 55 stories told on behalf of former children was published by the Abkhazian State University. The author of the book is Saida Vozba, Associate Professor of the Department of History and Theory of International Relations of ASU, Head of the Department of Source Study of AbIGI. 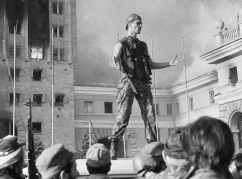 Through the entire collection, which is called "Fifty-five destinies", the main idea runs: history is "formed", including from what the child, children saw and felt.

Saida Vozba notes that when she first started working on the book, she wondered if the children's experience was considered a real story. Then, putting aside all doubts, I realized that "we need to work on what we really care".

"I dedicate this book to all children who survived the war. Over the years, I have heard many children's life stories. They constantly remind me of how children look at the world," says the author.

The book illustrates and discusses the impact of the war on children and youth, and tells how very young people were involved in the war and how it affected them.

"We don't often ask ourselves how war affects children and adolescents. Has anything changed in the role of children in war in the last hundred years? What makes young people, and sometimes children, go to war, and what can children do to help promote peace? Children are often called the "future of the country." But what is the future of the country if the majority of its population knew only war? What happens to these children and their future when they are deprived of conditions and attitudes, which are the main appearance for their physical, psychological and mental development?" these questions are asked by the author in the book, retelling the stories of children and trying to find answers.

When working on the book, Said Vozba used the "oral history" method. This is how the 55 stories came out. According to the author, with this method of collecting information, oral stories reveal aspects of history that "cannot be found anywhere else".

"Oral history is a living history that allows you to touch the past through the stories of ordinary people. It provides new ways of assessing the past, but at the same time it works according to its own methodology, which makes it different from other disciplines. The main nucleus in oral history is “a person in history,” says Saida Vozba, who had the idea of ​​such a book when she was a student. 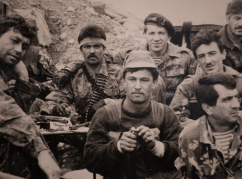 Portraits of the war: stories of Abkhaz volunteers

"I myself am a child of war, I understand the pain, experiences of children of war, their emotions and I know for sure: the one who survived it will never want to start a new war," the author admits.

She believes that each person "has his own memory of the experience."  Each of her heroes shares in the book their innermost, their pain, memories that have been "hidden" for so long.

"The heroes of my book are children in the past, and today they are adults. It is valuable for me that many, for the first time in so many years after the war, shared their memories, because no one had asked them before: "What did the war mean to you? What do you remember?" These were frank conversations between the children of war," the author shares.

One of the heroes of the book is Alisa Matua, head of the laboratory of immunology and virology, deputy director for scientific work of RIEPT ASA. She is one of those who are waging the daily war against the new coronavirus infection today. As a "child of war", Alisa Matua is well aware of the principles of struggle and survival, and she is a person who, despite her wartime childhood, achieved great success in life.

She explains that the "children of war" became adults very early: "I didn't want to admit it, but the children of Abkhazia cannot have another way. Not only me, most likely all conscious children. I have a cloudless, fabulous childhood in my memory, life before the war - and this war. Although our parents tried to protect us, nevertheless, we have endured a lot. I judge by myself, by my sisters, how much we tried to help, dealt with housework. My generation's childhood was stolen."

Another heroine, Tatyana Khishba, recalls how almost no one was left from her large family in a very short time: "... My family was divided into "before" and "after". If not for the war, my grandparents would not have left early. My grandmother, father's mother, due to the fact that her son did not return home, lost the use of her legs because of nervous conditions ... She was 62 when she died, although she was a strong woman. We were left without them. Without a father, grandfathers, grandmothers. We had a big family and suddenly all this was gone. We were left alone."

This is the second book by Saida Vozba, the first, the monograph "Historical and political aspects of the Georgian-Abkhazian and Northern Irish conflicts (XX - early XXI centuries): Common features and differences" was published in 2018.

"I am going to continue collecting the memories of the children of the war in the future. In addition, I am simultaneously collecting memories of children who were repressed during the terrible Stalin years," the author shared her plans.

The book "Fifty-five destinies" was published in the printing house of the Abkhazian State University. Its circulation is extremely limited, however, the author expects that in the near future it will be possible to issue an additional circulation.

Patriotic War of the People of Abkhazia (PWPA)
To leave a comment you need
to login or register.
Share
No comments

The first show of the film "Abkhazian Song" of the "Amazara" project was held in Sukhum
Teams of fraternal peoples: preparations are underway for the second "Иaрбан? Иаба? Ианба?" game.
Language as a key to the history of the people: a lecture on the Abkhaz language was held at the WAC office