In the Parliament of Italy in Rome, a Press Conference "The right of peoples to self-determination. Abkhazia and Great Europe" was held by an MP Matteo Dall-Osso with the participation of the President of Abkhazia Aslan Bzhania and the Chairman of the Supreme Council of the WAC Mussa Ekzekov.

On the evening of February 9, in the press conference hall of the Italian Parliament, in the Montecitorio Palace in Rome, a conference was held by the deputy Matteo Dall-Osso "The right of peoples to self-determination. Abkhazia and Great Europe."

The President of Abkhazia Aslan Bzhania addressed the organizers and participants of the conference online via videolink from Sukhum. His speech was translated from the Abkhaz language into Italian by Kan Tania, Chief of Staff of the World Abaza Congress.

The President welcomed the participants of the conference on behalf of the people of Abkhazia and noted the importance for the Republic of the chosen topic of the conference and the very fact of its holding within the walls of the Italian Parliament. Bzhania made a brief excursion into history and told about the formation of an independent Abkhazian state.

"Abkhazia, whose statehood dates back many centuries, has all the attributes of a state. Our people overcame all the hardships of the chauvinist policy of the Georgian authorities: on August 14, 1992, Georgian troops treacherously attacked our Republic. Despite the difficulties, we won and defended our historical right to a peaceful and independent life," the President said.

He reminded the audience that Abkhazia was in the most difficult situation of economic blockade.  In the post-war years, all efforts were aimed at restoring the country, its economy, and strengthening state institutions. The constitution of the Republic of Abkhazia was adopted, the Act

"On State Independence of the Republic of Abkhazia" was signed. The turning point was the recognition by the Russian Federation of the independence and sovereignty of Abkhazia.
"It is gratifying that the number of countries with which we have established diplomatic relations is gradually increasing. We understand that wide international recognition is a complex and long-term process. Abkhazia is open to mutually beneficial cooperation with all states that respect its position.  It is encouraging that more and more Italians are discovering our country, its culture, that ties are being established between the cities of Abkhazia and Italy. After all, there are long-standing historical ties between our peoples," Bzhania stressed.

He wished the conference participants success in their work and expressed confidence that it would be held in a constructive manner and would become a solid foundation for the development of friendly relations between the peoples of Abkhazia and Italy. 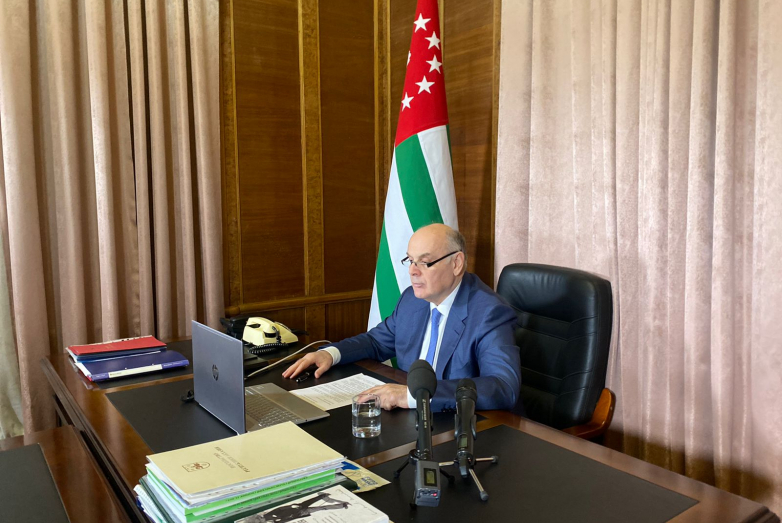 The guests and participants of the event were also welcomed, already in the Abaza language, by the Chairman of the Supreme Council of the WAC Mussa Ekzekov. His speech was also translated by Kan Tania.

Ekzekov spoke about the World Abaza Congress - an organization that brings together all representatives of the Abkhaz-Abaza people around the world to strengthen their connection with their historical homeland, preserve their native language and traditions. In order to unite all peoples and promote peace and stability, the Congress holds various socio-cultural events in different countries.

"I welcome you to this truly historic event for the entire Abkhaz-Abaza people. Abkhazians and Abaza are one people, whose representatives live in more than 50 countries of the world. Our Diaspora numbers more than a million people, and regardless of their place of residence, representatives of the people are always a reliable support in strengthening the state. The World Abaza Congress is ready to contribute to the discovery in a new way of the once intense ties [of the Abkhaz-Abaza people] with the people of Italy, the centuries-old traditions of cultural and trade connections," Mussa Ekzekov said. 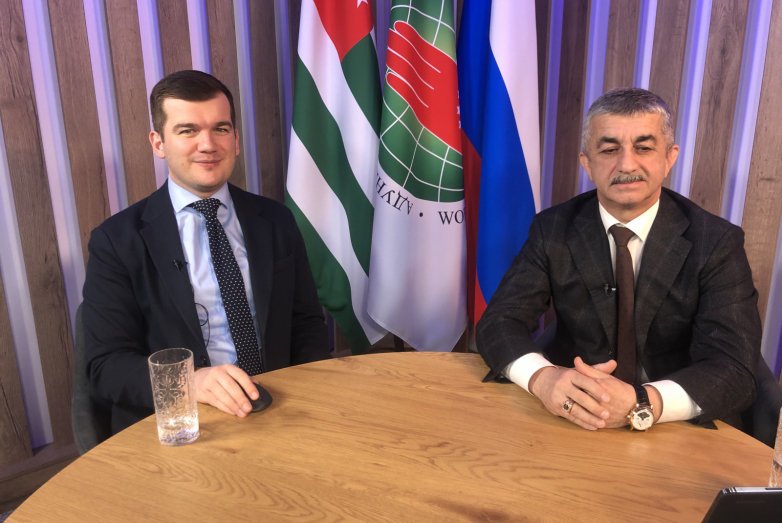 A member of the Italian parliament, Matteo Dall-Osso, gave a detailed historical background on Abkhazia. He spoke about the population of the Republic, its territory, its current political status.

"The Republic of Abkhazia is a Caucasian republic with a dual status. Georgia considers it its own territory, but the people themselves do not think so, therefore they declared the independence of the Republic of Abkhazia, which is recognized by nine countries, seven of which are UN members.  Abkhazia, regardless of international recognition, is a country with huge economic and geopolitical potential. Despite the ancient history of these people, its modern history is paved with suffering.  Let's hope that in the future it will be filled with international solidarity and the acquisition of new partners in support of a strategically important territory, which also has the potential for business partnership with Italy, this is a territory that we still have to explore and discover for ourselves," the MP said.

Among the possible areas of cooperation with Abkhazia that are interesting for Italy, he singled out the tourism industry.

"Tourism is traditionally a very important sector in Abkhazia. For Italy, this is also a great opportunity to share experience, invest, and attract new investors. This is something that the Italian-Abkhaz Chamber of Commerce could do, which will be opened in Rome in continuation of the agreements reached during the presentation of Abkhazia in Lamezia Terme in November (the point is about the presentation of the Republic of Abkhazia in the international diplomatic system on December 4, 2021 in the Italian city of Lamezia Terme, Calabria region. The event was held in a combined face-to-face and online format, with the participation of more than 70 people - ed.). In conclusion, I want to quote the recently departed President of the European Parliament David Sassoli: "You can’t build walls between people, they must be demolished," summed up Italian MP Matteo Dall-Osso.

Lawyer Antonio Lattanzio, analyst Suomi Monsellato, Ambassador-at-large of the Ministry of Foreign Affairs of Abkhazia Vito Grittani, public figure, head of the Cantiere Laboratorio Cultural Association Vittorio Gigliotti and Chief of Staff of the Supreme Council of the WAC Kan Tania also spoke at the conference. 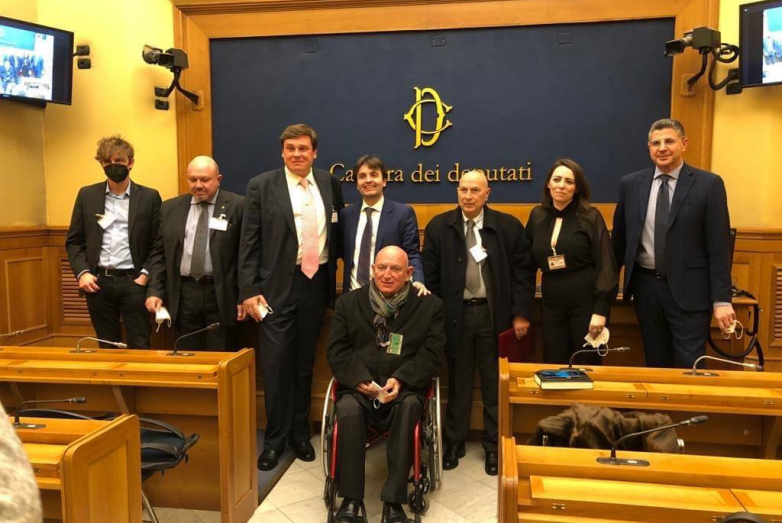 According to Tania, all the speakers from the Italian side were not just present at the event, but deeply studied the history of Abkhazia, its international legal status and the geopolitical situation around. They all "spoke very correctly and at the same time impartially."

"For the first time in the modern history of Abkhazia, the walls of the Italian Parliament "heard" the Abkhaz and Abaza languages, the point of view of the Republic of Abkhazia. In our opinion, this is a milestone event that will certainly bear fruit in the near future in the form of agreements with Italian universities and the establishment of trade relations with Italian businesses. There have not yet been such events dedicated exclusively to Abkhazia at the state level in the countries of the European Union," said Kan Tania.

According to him, the participation of the President of Abkhazia Aslan Bzhania and the Chairman of the WAC Supreme Council Mussa Ekzekov in the conference significantly raised the level of the event and demonstrated Abkhazia's interest in an open dialogue with other countries.

"It is very important that the voice of Abkhazia be heard on such high platforms, an opinion that differs from Georgian propaganda. Undoubtedly, the participation of the leadership of Abkhazia demonstrates a commitment to expanding the circle of countries recognizing the sovereignty of Abkhazia. The participation of the Chairman of the WAC Supreme Council also confirms the support of the numerous Abkhaz-Abaza Diaspora of this foreign policy course," Kan Tania explained.

The very fact that this event took place is the result of the long-term work of the Diplomatic Representative Office of the Republic of Abkhazia in Italy and the EU countries, which was officially registered in Italy in 2017, said the Chief of the Congress staff.
After the opening of the diplomatic mission, Ambassadors-at-large of the Ministry of Foreign Affairs of Abkhazia Vito Grittani and Kan Tania were appointed responsible for its work. Since that moment dozens of social and cultural events have been organized and held to popularize the objective image of Abkhazia, its culture and history.

"Diplomacy is a long and very laborious process that requires large human and material resources.  At this stage, we are talking about the development of a dialogue between the peoples of Abkhazia and Italy, which is de facto recognition, because it is much more important that objective information be learned about the Abkhaz-Abaza people, its rich culture, traditions, that trade and economic ties are established as well as student exchange takes place," concluded Kan Tania.

He expressed gratitude to "analyst and geopolitical adviser Suomi Monsellato, Ambassador-at-large of the Ministry of Foreign Affairs of Abkhazia Vito Grittani and friends of Abkhazia for their assistance in organizing such an important event for the Abkhazian international agenda."

Members of the Parents' Club of the WAC in Gagra discussed the problem of speech delay among children
Summing up the results of "Aimadara" in 2022: more than 400 children of Abkhazia took part in the project
The WAC Women's Council summed up the results of the Abkhaz-Abaza forum