The Abaza Drama Theater and the "Mercury" Dance Ensemble performed at the Days of Culture of Karachay-Cherkessia in the Republic of Abkhazia in honor of the 100th anniversary of the formation of the KChR.

Concerts of the Dance Theater of the State Philharmonic of the Karachay-Cherkess Republic "Mercury" and the plays of the State Abaza Drama Theater "In the Footsteps of the Makhadzhirs", dedicated to the 100th anniversary of the formation of the KChR, were held in Abkhazia with the support of the Ministry of Culture of the Republic of Abkhazia. 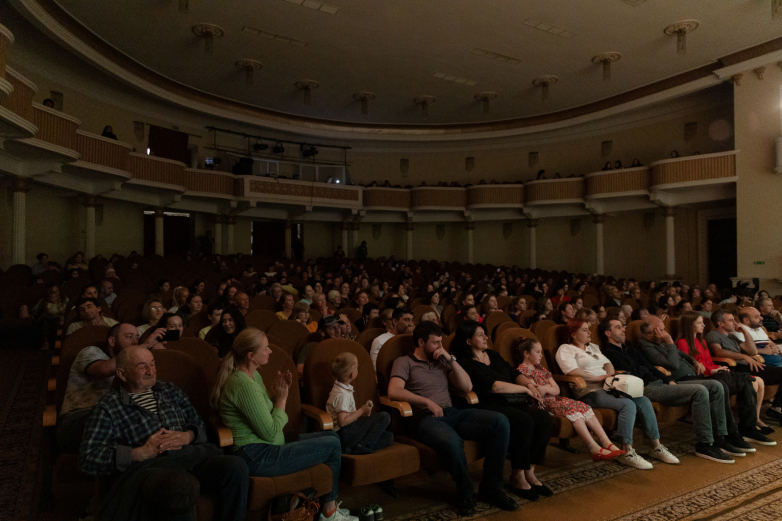 The Days of Culture of Karachay-Cherkessia in the Republic of Abkhazia were scheduled for last autumn, but due to the coronavirus pandemic, they had to be postponed. In May 2022, the teams were already able to show their art in several towns of Abkhazia: Gagra, Pitsunda, Gudauta, Tkuarchal, Ochamchira. The tour ended in the capital - in Sukhum.

On the evening of May 28, the Dance Theater of the State Philharmonic of the Karachay-Cherkess Republic "Mercury" performed with a concert on the stage of the Abkhazian Philharmonic named after Rozhden Gumba. 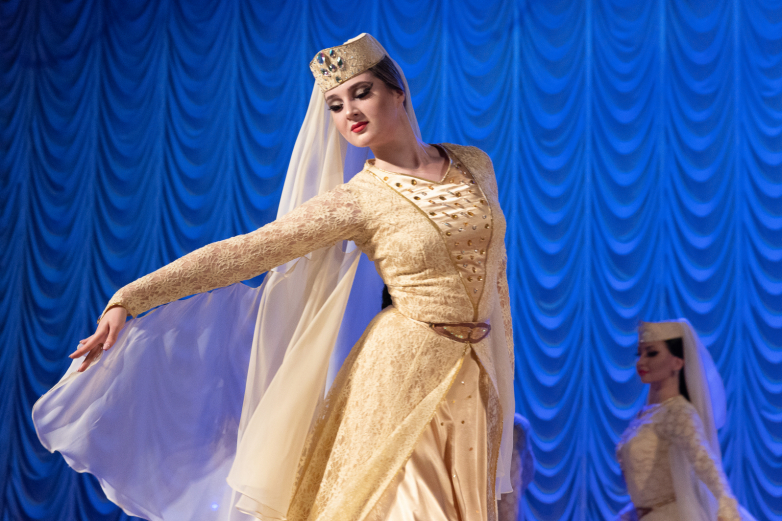 According to the artistic director and chief choreographer of the theater, Honored Artist of the KChR and the Republic of Abkhazia Murat Gagiev, the tour in Abkhazia is a huge event in the life of the team and artists who came to represent the culture of Karachay-Cherkessia. Gagiev said that all the concerts were sold out, the audience welcomed the team very warmly.

"There are people in the delegation who came to Abkhazia for the first time. Our people are stunned by the reception, they inadvertently ask: are they going to welcome us like this after each concert - with banquets, apatskha and abysta?" shared the artistic director and concluded: "We are glad to be here and speak to the residents of the fraternal republic of Abkhazia."

Preparing for the concert, 16-year-old artist Alesya Bavizheva admitted that performing in Sukhum is "especially exciting". The girl calls herself a new person in the ensemble, although she has been dancing in the team for two years.

"The final concert as part of the tour takes place in the capital of Abkhazia, so you need to give everything in full [the program]. This is my first adult ensemble, whereas I have been dancing since I was six," Alesya shared.

The concert program was opened by the "Makhadzhirs" dance - the most recognisable show of the ensemble. In total, 17 shows were presented, which consisted of dances of the peoples of the Caucasus. 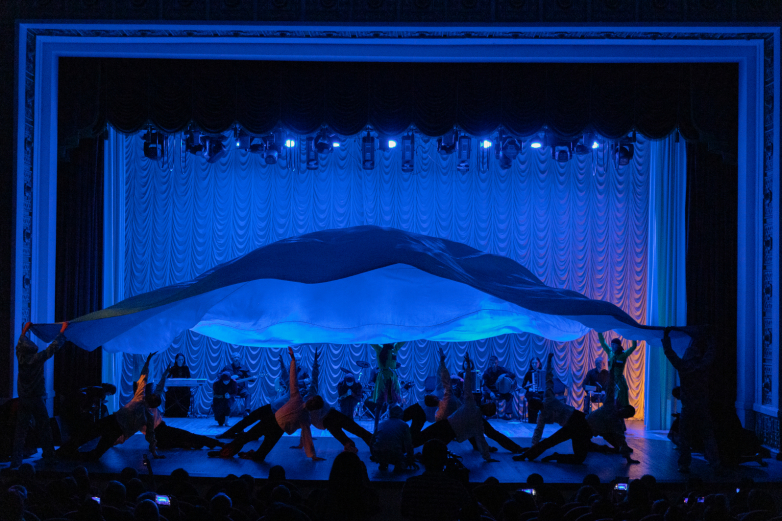 Abaza songs were performed by the soloists of the ensemble and an Abkhazian song performed by a guest singer from Sukhum, a friend of the group Maklanda Kvitsinia.

The unchanging final dance of "Mercury" is the choreographic composition "Dance, Land of the Soul!" This is an Abkhazian dance staged by the creator of the ensemble, people's artist of the KChR and the Republic of Abkhazia Valery Tania, who was born in Abkhazia, and then lived and worked in the KChR for 30 years.

"We always close the show, wherever we perform, with this dance. It does not leave the audience indifferent, because there are such parts that have not been seen before in the Abkhazian dance. The idea and staging of the dance belong to Valery Tania. Our team is his brainchild. We, his successors, students, came to the homeland of the founder," Gagiev explained. 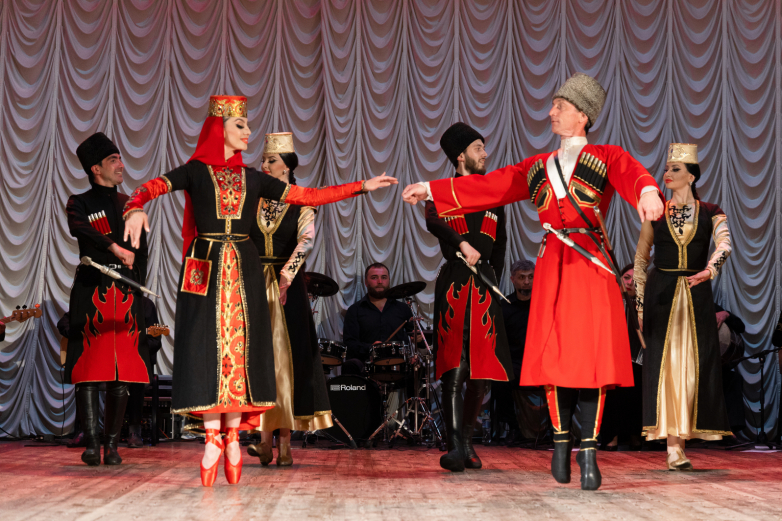 He added that the members of the group were worried before the performance: the main part of the program consists of Abkhaz-Adyg folklore, and there were a lot of "experts" in the hall and even, in his words, "giants of choreography" - guests of honor invited to the concert, famous dancers and  artists.

Therefore, the people's artist of Abkhazia, the recognized "Queen of the Abkhazian dance" Maya Gerzmava shared after the concert that she enjoyed the performance very much.

"I have known this team for a long time, my dear friend, partner Valery Tania worked there. I also know personally many dancers who are currently working. I really love the art of the North Caucasus, all my life I danced their folk dances. Thank you very much for coming, I haven't seen them for a long time. Good luck to them!" Maya Gerzmava said.

A small exhibition was organized for the audience at the Abkhazian Philharmonic. The foyer exhibited objects of decorative and applied arts, which were revived in Karachay-Cherkessia. Some visitors, admiring the exhibition samples, began to ask the price, but learned with regret that none of the exhibits was for sale. 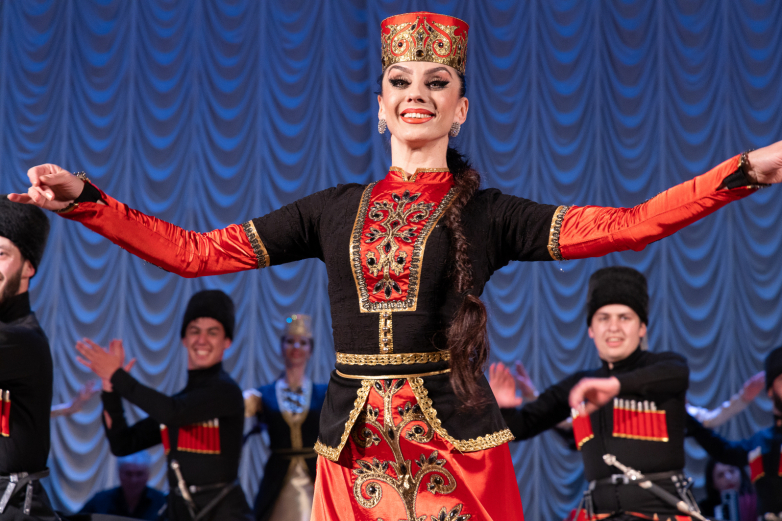 However, the head of the department of arts and folk crafts of the College of Culture and Art of Cherkessk Emma Lapugova willingly talked about each piece.

"This is a "spoon of friendship" with two scoops. This is shichepshin - a folk musical instrument, its strings and a ponytail bow. Everyone knows a man's hood, but look, here is a women's hood, decorated with silver thread," she listed.

There were really many truly exquisite and interesting rarities at the exhibition. Various textiles intended for decoration, such as buttons on women's and men's shirts, woven on the fingers.  Cothurns - shoes for the bride, on a special "platform" - she stands on them "in the corner" and rises above everyone. Here are mats made of reed leaves for various needs: Muslims prayed on such rugs, they were also used instead of a shroud, babies were wrapped in them, because this is an environmentally friendly material. Each mat is unique, with its own ornament. 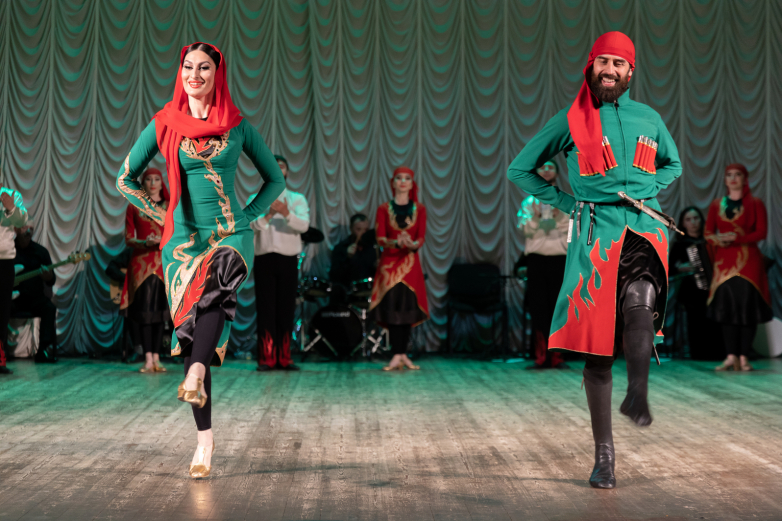 "They were also of different colors, and the saturation of the color depended on the duration of soaking ... in the swamp. If you hold it a little, the color is light brown, longer - dark brown with a greenish tint," Emma Lapugova shared interesting information.

On the same evening, on the stage of the Samson Chanba Abkhazian Drama Theater, a performance of the State Republican Abaza Drama Theater "Following the Makhadzhirs" based on the "A Handful of Earth" novel by Bemurza Tkhaytsukhov was shown. 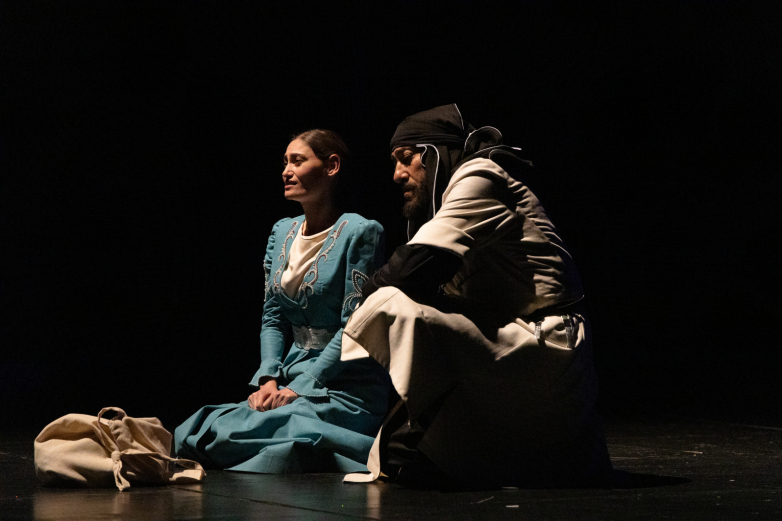 For the twenty-year history of the existence of the Abaza Theater, the current tour in Abkhazia took place for the first time.

Actress Radkha Kunizheva played the main role of the Abaza girl Asiat, who survived a series of tragic events in Turkey, where she moved with her father. The heroine found the strength to take revenge on the offending prince, was able to find her happiness with her chosen one and return to her homeland. The actress admits that at the first rehearsals she cried, sympathizing with her heroine.

"I stressed a lot. Then I pulled myself together and it let go of me. It is a very complex performance, it is difficult to act, to experience these events. But we don't want to forget history. It is common for us, the Abkhazians and the Abaza have the same roots," said Radkha Kunizheva.

The young actor Nazir Bidzhev shared that he was "amazed by the audience in Abkhazia", it is "very active and emotional".

"It really helps the actor on stage, the reaction to our actions is very lively. Despite the fact that we play in the Abaza language, the viewer is not distracted by the translation in the headphones, but is absorbed in the action. Unlike our spectators in the KChR, [the spectators in Abkhazia] were less restrained and emotional. We liked it very much. We hope to come to Abkhazia again with other performances," Bidzhev said.

The spectator Khanifa Sharmat, although she watched the performance with a radio translation, understood a lot even without the prompts of an interpreter.

"The Abkhaz and Abaza languages ​​are very similar, much was understood. A touching performance.  The theme of the production, forced resettlement after the Caucasian War, is, of course, our common pain. Abaza are our brothers, and we are always glad to see them in Abkhazia. May there be more tours like this. The more cultural exchange between the republics, the more people will get to know each other, come to each other," says Khanifa Sharmat. 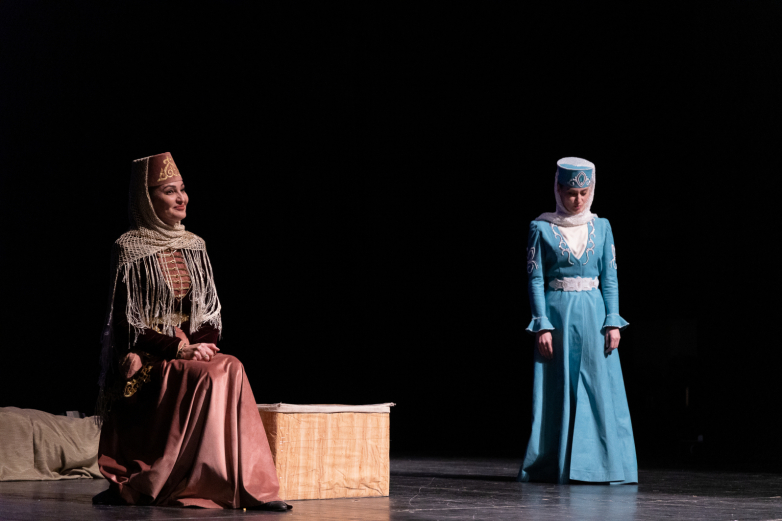 As a hospitable host receiving guests, the general director of the theater Alkhas Cholokua welcomed Abaza artists performing on the stage of the Abkhazian Drama Theater. The best dressing rooms were allocated to the actors, all the theater services tried to create comfortable conditions for them, so that nothing would distract them from concentrating on their roles.

"We had people close to us, our brothers, performing on stage. The fact that they showed their performance on the stage of the Abkhazian theater is of great importance for the local public. There was an opportunity to see the theatrical art of the fraternal people. It was gratifying to see that the audience reacted with great attention to the tour of the Abaza Theater, came to support them, filled the hall," said the general director of the Abkhaz Drama Theater. 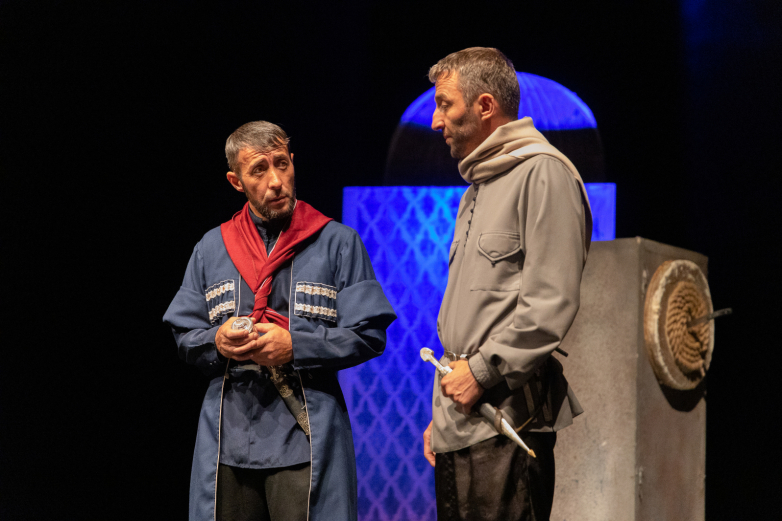 Cultural events between the KChR and Abkhazia are held and will continue on a regular basis. According to the Ministry of Culture, a performance of Abkhazian pop singers is scheduled to be held in Karachay-Cherkessia. Dates and names are yet to be confirmed.