WAC Executive Secretary Inar Gitsba became the first guest of the Congress Discussion club and spoke about himself and his work in the Congress at the club’s meeting.

The first guest of the WAC Discussion club, which began its work in November, was Executive Secretary of the Congress Inar Gitsba. At a club meeting on November 12, he talked about himself, his family, work at the WAC and plans for the future.

Students of the Faculty of International Relations of the Abkhaz State University, WAC colleagues, media representatives, employees of the “Ashana” charitable foundation and all who wished to attend the meeting gathered to listen to Gitsba. It went very warmly: the cozy hall, the relaxed atmosphere of communication, and the listeners' interest in the guest’s personality played their role.

Inar Gitsba talked with the audience for about two hours.

Gitsba devoted much of his speech to work in the Congress. He talked about how he “became infected” with the ideas of the WAC, and about what goals and tasks the Congress sets itself. The Executive Secretary of WAC shared with the participants the results of the work and plans of the Congress.

“Our compatriots live in more than 50 countries of the world. In addition, the main task [of the WAC] is the unification of all representatives of the Abkhaz-Abaza ethnic group. According to the Chairman of the Supreme Council of the WAC [Mussa Ekzekov] - and we (Congress staff - ed.) fully share this position - we (the WAC) must know each representative of the Abkhaz-Abaza ethnic group “in person”, we must “go into” each home, every family,” said Gitsba.

The Executive Secretary of the WAC previously worked in the Ministry of Foreign Affairs of Abkhazia, was the representative of Abkhazia in Turkey. He told the meeting participants about how the experience of a diplomat helps him in the current work of the World Abaza Congress. In his current position, he often travels abroad, meets with representatives of the Diaspora in the countries of residence of representatives of the Abaza people. The activity of the WAC in establishing contacts among the Diaspora was called by Gitsba “public diplomacy itself”. 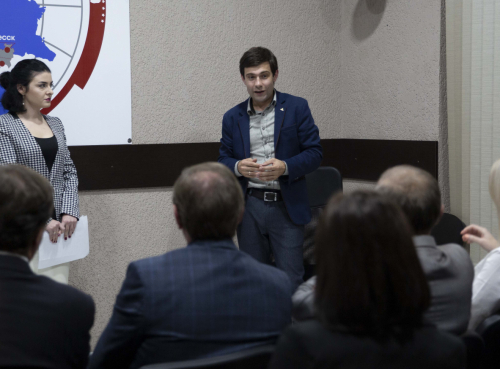 He noted that during communication with representatives of the Abkhaz-Abaza ethnic group around the world he constantly observes “the desire to learn more about the historical Motherland, about its roots.”

“And this is also one of our main tasks - “to build bridges,” added Inar Gitsba.

Seeing many young people at the meeting, the Executive Secretary of the WAC paid attention to the fact that the Congress is busy with youth. He said that the WAC has a special structure that works in this direction. Levan Torchua, who heads it, will also soon become one of the guests of the Discussion club, Gitsba said.

The meeting participants were able to ask the guest personal questions. For example, students asked how he manages to find time for his family and be such a successful person in such a busy schedule.

“These are interconnected things. If you are unsuccessful in the family, then it is unlikely that you will be successful in work. Everyone should start with himself, with the family. You need to love what you do, to believe in it. With the right daily routine, everything can be harmoniously combined,” Inar Gitsba assured his listeners.

Inar Gitsba replied that discussions are underway on this subject, and there are already concrete proposals that will become known very soon. 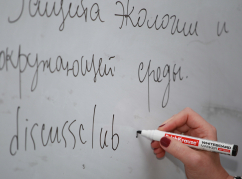 The head of the WAC Discussion club, Irina Turava, believes that the club’s first meeting with the guest was a success.

“Those present had a great interest in the topics that Inar Gitsba touched upon. We will also meet with the head of the WAC web information portal Amina Lazba, the leaders of the Women's and

Youth Councils of the Congress Geta Ardzinba and Levan Torchua,” Turava promised in her turn and reminded that anyone can meet with the guests. Admission to meetings is free. Live broadcasts of meetings on the club’s social networks are also organized.

The editor-in-chief of the Abkhaz television’s socio-political broadcasting, Georgy Berzenia, who also attended the meeting, noted that he had come in order to “learn more about the work of the WAC”.

“The Discussion club is certainly a great idea. Moreover, the WAC proposes in the future the implementation of the most successful projects (of those that will appear in the discussion process - ed.). The topics that the club offers are very interesting, and most importantly - relevant. I’ll definitely come, get acquainted, communicate, and possibly offer interesting projects,” said Berzenia.

Inar Gitsba Discussion club
To leave a comment you need
to login or register.
Share
No comments