Money Museum was opened for the first time in the Republic of Abkhazia.

The Money Museum at the National Bank of Abkhazia was opened in Sukhum on Friday 14 May. Its first visitors were journalists, for whom the Chairman of the bank Beslan Baratelia and the director of the museum Astamur Tania conducted a tour. 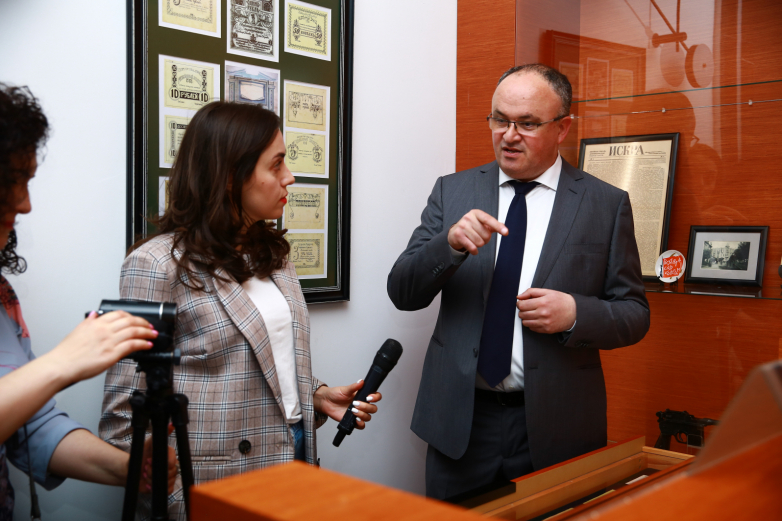 Commenting on the idea of ​​opening a museum, Beslan Baratelia said that in recent years the National Bank has been actively promoting numismatic activity. Participation in international exhibitions and conferences prompted the bank's management to organize a platform in Abkhazia where all the coins issued by the bank would be presented. However, over time, an idea appeared to expand this platform and present on it not only modern Apsaras, which were issued by the Bank of Abkhazia, but also all the money that had circulated in the territory of Abkhazia since ancient times.

"This is a great event for our country, since it is also an element of our independent state," said the head of the bank, calling the new museum a "material monument" of Abkhazia, which "speaks of the country's rich history, of those economic relations that took place at different times." 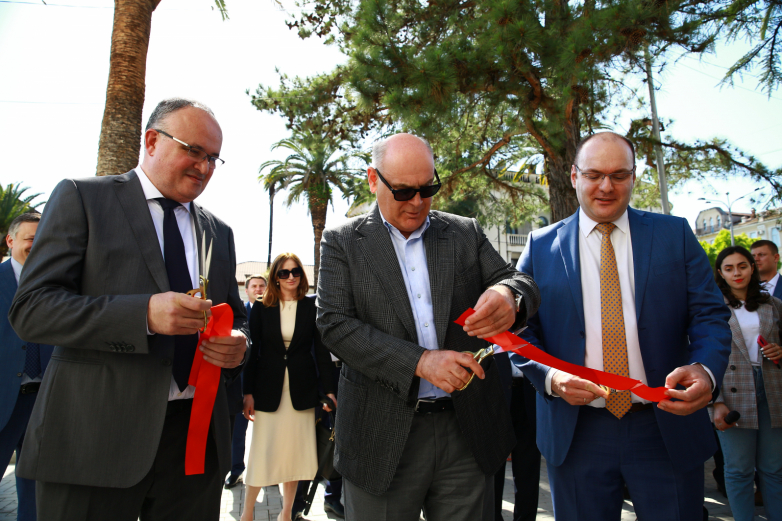 Baratelia said that the museum will hold scientific events and prepare various studies.

The well-known Abkhazian political and public figure, historian and numismatist Astamur Tania became the director of the newly opened museum. He said that the constantly replenishing fund of the museum now represents all stages of monetary circulation in the territory of Abkhazia, from the 5th century BC to the modern period. According to Tania, the museum's fund is made up of coins and bons (banknotes and other substitutes for money, such as shares, bills of exchange, etc. - ed.), the most complete department is about modern commemorative coins issued by the Bank of Abkhazia.

The head of the museum said that after the October 1917 coup, when the collapse of the Russian Empire and, as a result, its financial system, there was rapid inflation, the state did not have time to saturate the market with money. Prices were rising, there was a big bargaining exchange crisis. It was typical for the entire territory of the former Russian Empire and, in particular, for Abkhazia.

"In this regard, many private organizations, cooperatives, cinemas, ethnic [and other] communities, for example, the Sukhum Church, issued their own monetary surrogates. This money circulated in the same narrow circle. Let's say the store issued some coupons and accepted them as payment. Of course, bons were most widespread in Sukhum and in Gagra. The rarest and not yet found are Ochamchira bonds," Astamur Tania said, explaining that there are references to Ochamchira bons in certain sources, but they have not yet been found.

Tania also told about the logo that was chosen for the Museum of Money.

"Our logo is a stylization of the obverse of the Colchis hemidrachma coin (half of the ancient Greek monetary unit drachma - ed.) of the late 5th - early 4th centuries BC. This coin best reflects the essence of our museum, because with these coins intensive money circulation began on the territory of Abkhazia," he noted. 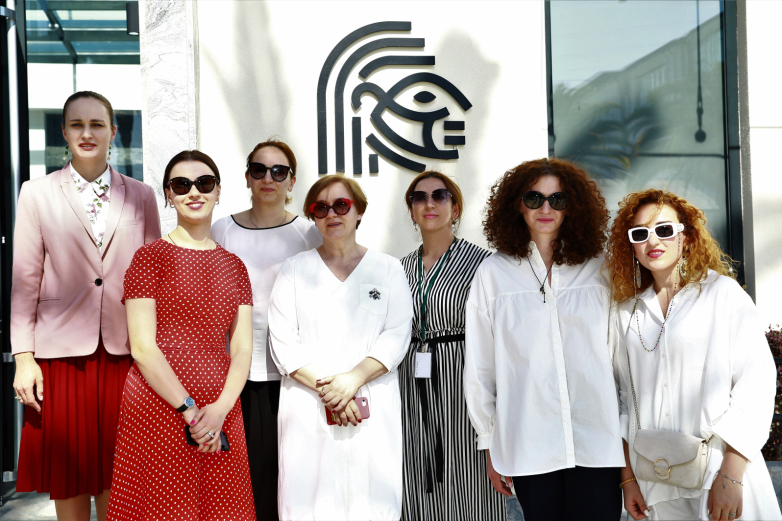 Architect Kama Katsia worked on the design of the museum's appearance. She said that where the windows of the museum are now, there used to be a wall with photographs. Between this wall and the bank there was "a dark piece of space, because of which light did not enter the building, and inside there was a non-working and damp space of the assembly hall."

"We decided to rebuild this nondescript place, attach it to the main building and bring additional sources of natural light - glass hatches in the ceiling, which made it possible to create a bright, comfortable space with a clear logic of movement," the architect shared the details. 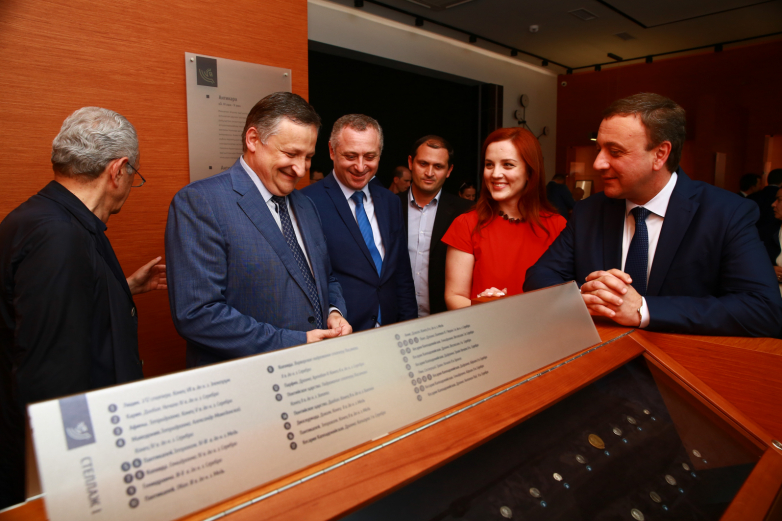 Katsia said that the style of the facade has been preserved in constructivism traditions (in which the architecture of the bank itself is made - ed.). The building is an object of historical and cultural heritage, therefore, the reconstruction and extension were carried out very carefully. At the same time, it was possible to make the entrance group more modern, also to integrate the ramp, which made the museum accessible to sedentary groups of visitors.

"I was tasked to make a modern stylish interior, cozy and respectable. I did not go into deliberate modernity and tried to make the interior in the traditions of constructivism and the bank itself. However, since all the materials and lighting devices are modern, the interior also turned out to be relevant," said the author of the project.

The architect worked on the project for three months, and the preparation of the exposition and the fund itself took about a year.

"There are quite a few hooks as well: a wall with a waterfall an onyx panels, and brass and copper parts - all this is playing with the idea of ​​money, gold mine, a 'fountain of money' and so on. Even the marble on the floor has been chosen with golden veins. The color of the tree is also purposely amber. The examples that I studied before the start of the project did not particularly influence, since the tasks of museums are completely different, respectively, and the way of implementation is different," said Kama Katsia.

Public figure and journalist Nadezhda Venediktova highly appreciated the fact of opening a money museum in Abkhazia, expressing the opinion that this event "drags reality to the future."

"The creation and opening of such a museum is a daring challenge to our today's reality. This is an unthinkable refinement that only people who could look far ahead could come up with," she said.

The museum will be open daily, except Mondays, from 11:00 to 18:00. It can be visited both individually and as part of a group excursion. Tours will be held in Abkhazian, Russian and English.  The cost of a ticket with a guided tour is 250 rubles, an independent visit will cost 150 rubles. The starting time of the tours will be posted at the entrance shortly.

A horse from Abkhazia won the competition at the newly opened hippodrome in the Karachay-Cherkess Republic
WAC organized and held a children's holiday in Sukhum
Exhibition "Sukhum Art Nouveau": born out of love for Sukhum and goes straight to the heart

Making of ashamaka: technology in detail