On January 29, 1918, the first Abkhaz performance took place, which laid the foundation for Abkhaz theatrical art. And the founder of the genre of Abkhaz drama is considered Samson Chanba, who gave the name to the Abkhaz Drama Theater.

Samson Yakovlevich Chanba was born on June 18, 1886 in the village of Atara, Kodor Uyezd (now Ochamchira district - ed.) of Abkhazia in the family of a poor peasant. He was the only brother of five sisters. Father, Chiagu (home name), despite all the difficulties, managed to make his curious son go to school. In 1893, the seven-year-old Samson entered the Dranda church school and then continued to study at the Sukhum Mountain School. However, he was not included in the number of students whose tuition was paid by the state. He was taught by his father: he traded on the Sukhum market and spent all the proceeds on the training and maintenance of Samson.

The pioneer in everything and the patriarch of Abkhaz literature: about Dmitry Gulia

The boy lived up to his father's expectations and showed remarkable abilities. Having successfully graduated from the Mountain School, Samson entered the Kutaisi Agricultural School, which he graduated in 1907. After its graduation, Samson Chanba lived for a year in his native village of Atara.

The young boy really wanted to continue his studies, but there was no such opportunity, and he began to teach at the Kutol rural school. He loved the teacher's work, but soon he was not allowed to teach at school due to the lack of a pedagogical certificate. Then Samson showed perseverance, entered the Honsky teacher's seminary and graduated from it brilliantly in 1914. Already with a diploma, he returned to the same school in Kutol, where he was forbidden to teach and worked there for over a year as its caretaker. In 1915, he transferred to work in the Adzyubzha school, where he met his future wife, also a teacher, Elena Nikonorovna Goyden. They soon got married and moved to live in Sukhum.

In Sukhum, Samson Chanba got a job as a teacher in a primary school at the Teacher's Seminary. At first he was a teacher of the Abkhaz language and geography, later he began to lead this school. The appearance of Samson Chanba in this seminary, the foundation of which is associated with such outstanding names for the Abkhaz enlightenment as Dmitry Gulia, Andrey Chochua, Foma Eshba and others, was not accidental. He intentionally sought acquaintance with these people, his like-minded people, who thought that Abkhazia should embark on the path of education and culture. 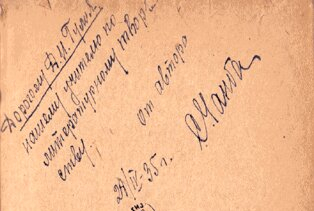 In a sense, they all saw their mission in this together. It was at this teacher’s seminary that Dmitry Gulia, who worked there from the day it was founded, organized the “Morning Star” literary club. It was in the seminary that the first Abkhaz theater troupe appeared which at first consisted of theatrical art lovers.

At the elementary school at the seminary, Samson Chanba devoted most of his time to teaching the geography of Abkhazia. He even wrote his own geography textbook. This first geography textbook in the history of Abkhazia was published in 1923 and then reprinted several more times in the 30s of the last century.

In the newspaper and in politics

In 1920, Samson Chanba was a member of the editorial group of the newspaper “Apsny”, the very first print publication in the Abkhaz language. 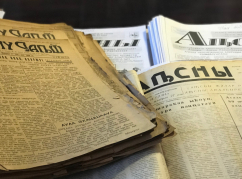 On the day of the 100th anniversary of “Apsny”: what the first Abkhaz newspaper wrote and writes

The editor of this newspaper was Dmitry Gulia, and Samson Chanba wrote a welcome article in the very first issue. He writes in the article that the newspaper aims to “lead people in the right direction, identify all shortcomings and errors, open their eyes to the truth and expand the horizons of knowledge.”

After the establishment of Soviet power in Abkhazia, the opportunities for a bureaucratic and political career opened up for Samson Chanba. In 1921-1925 and 1930-1932 he headed the People's Commissariat of Education of the SSR of Abkhazia. In 1923-1930, Samson

Yakovlevich was the Chairman of the Central Executive Committee of the Abkhaz ASSR. Moreover, from 1932 to 1937, that is, until the end of his life, he headed the Union of Writers of Abkhazia.

Yet, neither the bureaucratic, nor political, nor even more communist activities of Chanba were fundamental in his life. The main thing for him was enlightenment and the literary path. Chanba began his literary work as a publicist. His first articles were published in the Russian-language newspapers “Transcaucasian Speech” and “Sukhum Leaf”, and his first works of art appeared on the pages of the “Apsny” newspaper. Among them is the poem “The Virgin of the Mountains” (another title - “She was beautiful” - ed.), as well as the historical play “Makhajirs”.

The play “Makhajirs” was first issued in 1919 on the pages of the “Apsny” newspaper, in 1920 it was published separately. Its plot is based on the sad pages of the history of Abkhazia of the 19th century - the tragic eviction of people from their native lands, which was called “makhajirism” (today this term is used much less often, since its etymology implies a massive resettlement of Muslims from a non-Muslim country to a Muslim one, which does not correspond to events of XIX century in Abkhazia - ed.). 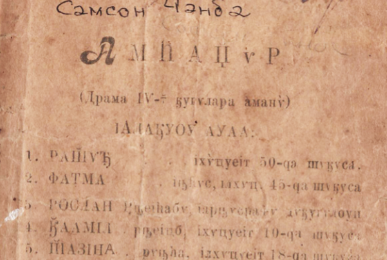 This dramatic work is considered the first in the genre of the play in the history of Abkhaz literature, and Samson Chanba himself is the founder of the Abkhaz dramaturgy. The play “Makhajirs” was repeatedly staged in the Abkhaz Theater. The premiere of the play in the Abkhaz Theater took place on June 27, 1928. The director of the theater was Krivtsov, but even earlier in the same production a play about the tragedy of people forced to leave their homeland forever was presented in the Sukhum Russian theater, where it was called “Batal”.

What happened at the premiere of the performance in the Abkhaz Theater is described in the book “Abkhaz Soviet Drama” by Vladimir Darsalia. Here is how he describes the reaction of the author of the play, Samson Chanba, who, of course, was in the auditorium: “The author silently and intently, not betraying his feelings, watched the artists play. Events unfolded rapidly on the stage when optimistic and enlightened ones replaced sad pictures. However, the performance is over. After a moment's pause, the theater exploded in a storm of applause. The author was demanded to the stage ... Confused S. Chanba pointed his hands to the actors ...”

It is not surprising that this performance was a huge success with the audience. Samson Chanba knew a lot from people's stories about tragic times in the country's history and reflected this in the play. It is not based on documents or studies of the topic - at that time they simply were not widely available - but on the stories of families passed from grandfathers to sons, from sons to grandchildren.

Thus, Shota Salakaya, a doctor of philological sciences, a researcher of Abkhaz literature, notes that in a play by Chanba, one of the most common folklore stories about makhajirism takes place in a separate episode, telling about how a mother cradles, singing a lullaby song, to an already dead baby, fearing that they will take him away and throw into the sea. As you know, when people were transported by boat, all those who died on the way were mercilessly thrown into the water. And this mother managed to bring her child to the shore in order to bring his body to the ground. According to Salakaya, such an event really took place, there were people who remembered it and were witnesses of the grief of that mother.

“It is curious that in the drama “Makhajirs” there is not a single historical figure among the characters, - writes literary critic Vyacheslav Biguaa. - For him (Chanba - ed.) it was most important to present generalized images, although this was not always possible for him. The correct statement of many questions of the history of the people and their artistic embodiment in the “Makhajirs” make the living descendants think about the fate of their people.”

Samson Chanba is also the author of the novel “Seydyk”, one of the first prose works in Abkhaz literature. The main character of the work is a “kulak” (prosperous peasants were called “kulaks” - ed.) Seydyk, who opposed collectivization (the policy of uniting individual peasant farms into collective farms, carried out in the USSR from 1928 to 1937 - ed.) for maintaining the old relations in the village.

Samson Chanba in his work

During the years of Stalinist repressions, Samson Chanba fell into the millstones of the terror machine, was repressed and shot in 1937. In the mid-fifties, he, like many of the repressed in the 30s, was rehabilitated, that is, they admitted that all the charges against him because of which he was killed were fabricated and false.

The Abkhaz State Drama Theater bears the name of Samson Chanba, as well as streets in various towns of the Republic. One of his comrades and associates, a well-known public figure Andrey Chochua, said of Chanba: “He had such valuable human qualities as generosity, honesty, the ability to work tirelessly, modesty. In addition, no doubt, he was a great patriot who served his people with all his heart. These qualities of him earned him great authority and respect among people.”