Songs of Abkhazians: the "Amazara" project of the WAC presented the fourth video on intangible heritage

A new documentary film about the Abkhazian song continued the "Amazara" project of the WAC and the ANO "Alashara" about the intangible heritage of the Abkhaz-Abaza people. The filmmakers told the WAC information portal about the making of the film and the working process.

As part of the "Amazara" project of the World Abaza Congress and the ANO "Alashara", another film was made about the intangible heritage of the Abkhazians and Abaza. It is dedicated to the Abkhazian song. The director and screenwriter of the film was the Honored Artist of Abkhazia, head of the Samson Chanba Abkhazian Drama Theater Madina Argun.

She said that she knew about the project and became interested in it even when the first film "Amazara" was made in the Abkhazian theater about the Abkhazian dance. Then, among the topics planned within the framework of the project, she noted for herself the Abkhazian song and a little later began to work on the next film. The work on it lasted about two years with a break due to the pandemic.

The film reveals six types of folk songs. These are lullaby, heroic, labor, wedding, ritual, religious songs. The video tells about their use, that is, about exactly when the Abkhazians sang them.

"Abkhazian songs were born for a reason, they were born by events. We have six songs in the film that go with a person from birth to death. We created a scenario about the life of an Abkhazian. Life begins with a lullaby, from the birth of a person, and at the end he comes to God, and the religious song "Анцәа рашәа" (translated from Abkhazian as "song of the gods"  - ed.), Madina Argun explained.

Harmony of goals and creativity

The director said that from the very beginning of the work on the film, she attached great importance to the target audience, asking questions: who is the audience of the film, what are their expectations?

"I wanted to expand the audience, and, first of all, I thought about young people in order to raise their interest in our national culture, in songs," Argun said.

She did a lot of research work, read books by famous musicologists and historians: Aida Ashkharua, Shalva Inal-ipa, Georgy Dzidzaria and others. The result of two months of preparation for filming was an 18-page script. Madina Argun thought over the dramaturgy of the video: thus, the film became not only informative, but also artistic.

Therefore, the material of the film is united by the story of a certain girl-traveler (played by Nina Nachkebia), whose path begins at the sea and ends in the mountains, and who tells about another song in the frame. According to the director, this is a kind of "artistic stand-up correspondent." The off-screen voice belongs to the honored artist of Abkhazia Roman Sabua. 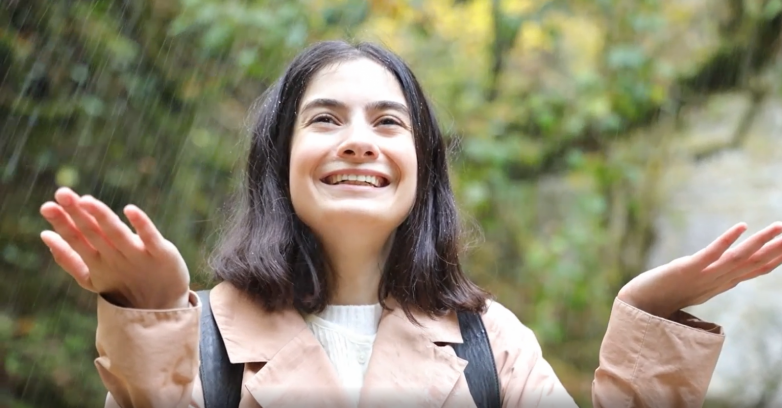 The film also features graffiti artist Kadyr Tvanba, a repatriate from Turkey who returned to his historical homeland several years ago. He was given the task of creating not illustrations of the plot of the song, but pictures based on associations that are born in him when listening to a particular song.

Madina Argun explained that as a director, it was important for her that everyone from the project team could "creatively express themselves on a given topic." She thanked the authors of the "Amazara" project for not restricting her "in her creative fantasies."

A team that loves native

Folk songs in the film are performed by the original choir "Ахьышьҭра" (translated from Abkhazian as "source" - ed.) from Gudauta, led by graduates of the Saratov State Conservatory Esma Gunba and Saida Dzhenia.

Esma Gunba shared that it was interesting for the members of the choir to take part in the "Amazara" project.

"The ensemble consists of young people aged 14-30 without special musical education. They are interested in making folk songs, they want them to be loud. We build everything on enthusiasm and love for the native. We have about 30 folk songs in our repertoire. We also carry out research work and field expeditions to the villages of Abkhazia, talk with the elders, record the songs that they remember," the head told about the nuances of the choir’s work.

Madina Argun, in turn, noted that the music for the film was recorded directly on the set in the rehearsal room, and not separately in the studio. According to her, this became possible thanks to the professionalism of sound engineer Timur Narmania.

"There is no post-production sound. It was important for me to record a clean sound," the director explained.

In general, the director emphasized authenticity: both in terms of sound and video, the viewer will be able to hear, see and recognize truly unique artifacts. For example, a 120-year-old wicker cart from the family of Madina herself appears in the film, which is kept at their home as a museum piece, a family heirloom.

The film runs 25 minutes, but the material was filmed for 15 hours, 7 hours of sound was recorded.  Filming took place in the villages of Aatsy and Kulanurkhva, in the town of Novy Afon.

The participants and creators of the film worked in the "Amazara" project on a grant basis. The director explained that everyone who somehow took part in the project was "charged with the idea of ​​​​the film." Just to bring one example: the flow of tourists along the suspension bridge over the Bzyb River was stopped for an hour and a half for the sake of filmmaking, and this is at the height of the tourist season. Thanks to the most diverse assistance, according to Argun, "a bright, kind product" was obtained, in which "all the energy of love for the native" of the Abkhazian people was invested.

"This is silent patriotism, when everyone modestly and quietly do their job," the director explained, once again expressing her gratitude to the WAC for the opportunity to join the project.

The creative team also included cameraman Naala Avidzba and composer Temur Agrba, as well as drone cameraman Akop Kushyan. The result of his work was stunning views of Abkhazia from a bird's eye view. According to the director, these beauties are filled with deep meaning.

"There are not just views of Abkhazia in the film - there is not a single shot that would be just for beauty, everything is dramaturgically woven into the movie’s theme," she added. 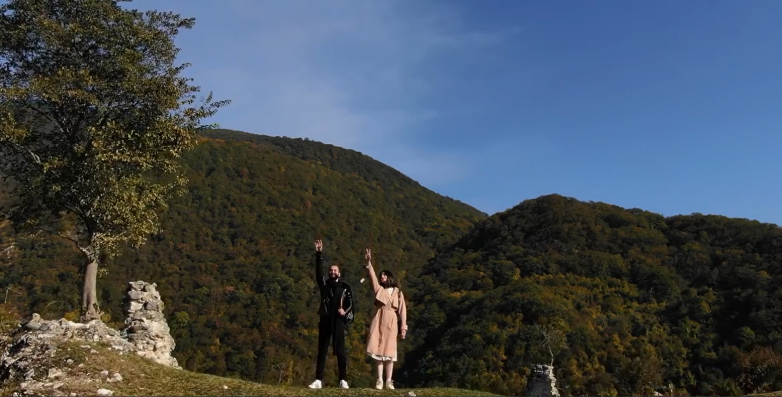 In addition to six folk songs, all the music in the film was composed by Temur Agrba. Earlier, he also created several melodies based on national Abkhazian motifs for a film about Abkhazian dance.  Agrba admits that the topic of folk music is very close to him.

"I want to thank Madina for having analyzed so deeply what an Abkhazian song is, studied the material in detail. This (film as a work - ed.) can be passed on to the next generations. Folk songs, dances, legends - this is what makes us authentic among other peoples of the world," the composer believes. 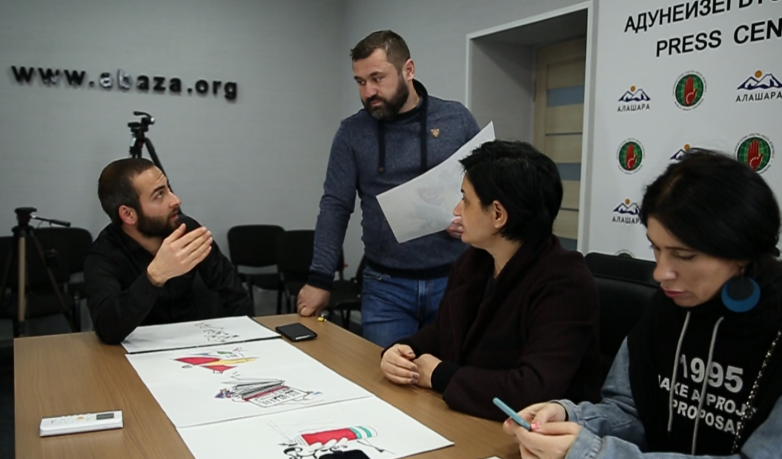 Thanks to her participation in the "Amazara" project, the film's cameraman Naala Avidzba "felt her professional demand."  She confidently says that it is simply "natural" for a professional to take part in such a project.

"It's like air, it's a dream to make a film like this. There were no difficulties: life is beautiful when you are in such a process. All cameramen in Abkhazia dream of making films. My dream came true in this project. I am a musician by training, and the material was familiar to me. The most important thing for any professional person is the opportunity to realize his skills, to be in demand in his business," Avidzba shared. 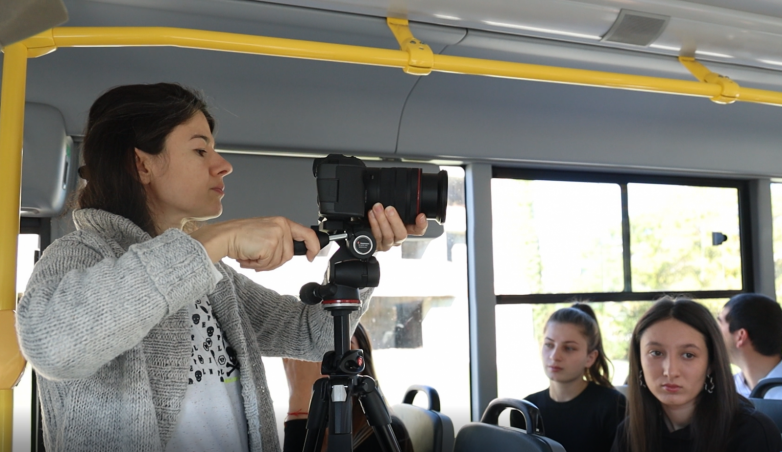 Extend the memory of the Abkhazian song

The film was produced by the head of the WAC Women's Councils Geta Ardzinba. In her opinion, the director "has approached the project in a non-trivial way."

"The film turned out as a dedication not only to the Abkhazian song, but also to the Abkhazian perception of the world. "Fading nature" - this is my attitude to this film, it's like you catch the last rays of the sun, and you want to absorb them and capture what a particular song meant, how the Abkhazians lived, their attitude to nature, their relationship with mythology. Perhaps, after watching the film, some will want to read ethnographic material about how songs were born among the Abkhazians," suggested Ardzinba.

As her personal objective as a producer of the project, she calls the task "to extend, if not the practice, then at least the memory of the Abkhazian song."

Geta Ardzinba also expressed her opinion about the uniqueness of the "Ахьышьҭра" original choir.

"We have only one such choir. They do not sing academically, but preserve the national character.  They need to be helped in every possible way, they need to be involved in interesting projects," Ardzinba said.

She said that the Congress team also managed to translate the film into all six working languages ​​of the WAC web information portal in a short time.

"This also meets the goals and objectives of the project. The film will be available for our brothers around the world," shared the producer.

The first audience of the film at the closed screening were the staff of the Congress and the editor-in-chief of the Information portal of the Congress Amina Lazba. She believes that director Madina Argun, "as always in her performances", in the film "distinguished herself by a deep study of the material with which she worked."

"It is felt in every detail of the film. Everything is important in it. Surprisingly, the director managed to combine modernity with folk traditions. Therefore, mobile phone, Internet and even graffiti were surprisingly successfully woven into the narrative of the folk song. I liked the very story of the folk song, which is an integral part of our life in both happy and mournful moments. I was shocked by the singing and polyphony, which touched the heart and continues to "sound" for a long time after watching. I was also impressed by how our folk singing and images of our incredible nature are in harmony with each other. It is so natural that, it seems, it could not be otherwise," Amina Lazba shared her impressions.

The press screening of the film about the Abkhazian song will be held at the WAC press center on May 16 at 14:00. Free entrance.

The "Amazara" (translated from Abkhazian as treasure, treasury - ed.) project of the World Abaza Congress and the ANO "Alashara" is dedicated to the intangible heritage of the Abkhaz-Abaza people. The author of the idea is Mussa Ekzekov, Chairman of the Supreme Council of the WAC.  The project is aimed at promoting the intangible cultural heritage of the Abkhaz-Abaza people through modern Internet technologies. Earlier, within the framework of the project, three films were created and presented about the Abkhazian national dance, about the Abkhaz folk song "Нарҭаа рышҭыбжь" (translated from Abkhazian as "Echo of the Narts" - ed.) and about the traditional Abaza knife making.