“Sun Rays”: a book about successful representatives of the Abaza people from Turkey

A journalist from Abkhazia, Saida Zhiba, collected in one book stories about successful representatives of the Abaza people living in the Republic of Turkey.

Abkhaz journalist Saida Zhiba published a book-album “Sun Rays”, which includes 67 stories about the life of successful representatives of the Abaza people living in Turkey.  The publication of the book is dedicated to the 155th anniversary of the forced resettlement of Abkhaz and Abaza from their historical Motherland (Memorial Day of the victims of the Caucasian War, after which there was a mass exodus, annually commemorated on May 21 - ed.) 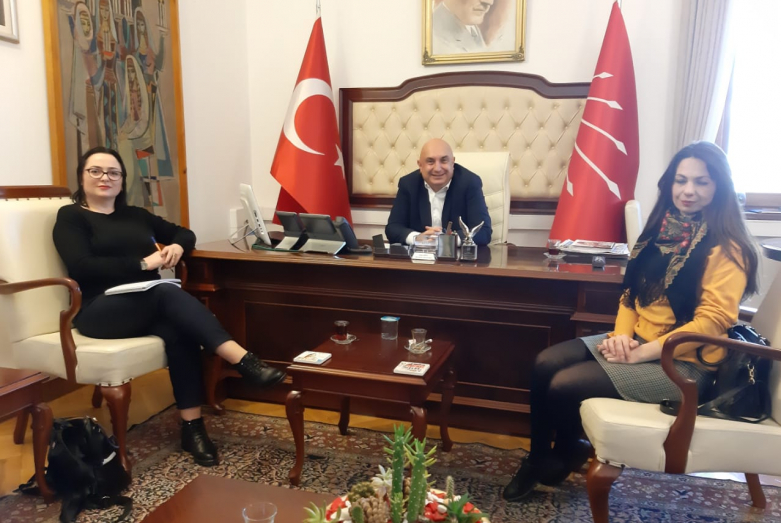 The author told the WAC web information portal that the idea of ​​creating a book of stories of famous compatriots came to her during a visit to Turkey in May 2018.  Together with her colleague Zarina Kogoniya, she was in the city of Adapazary with her friend, Yujal Sergegia, for about three weeks.  According to the journalist, during this time they managed to get to know different representatives of the Abkhaz-Abaza Diaspora from different regions of Turkey.  Many of these people have achieved great success in their fields of activity and have long been respected in Turkey.

“I was very pleased that they are proud of them in Turkey, that they are known, respected.  At the same time, I wanted to tell about them in their historical Motherland - so that they would be known and proud of in our place in Abkhazia.  So the idea came to collect all these stories.  From that moment the work on “Sun Rays” began, Saida Zhiba shared.

The author recalls that, having returned from Turkey and keeping thinking about possible ways to implement her plan over and over again, she began to turn to friends and acquaintances for support.

“The birth of this book was made possible thanks to the help of a large number of people,” Zhiba explained. 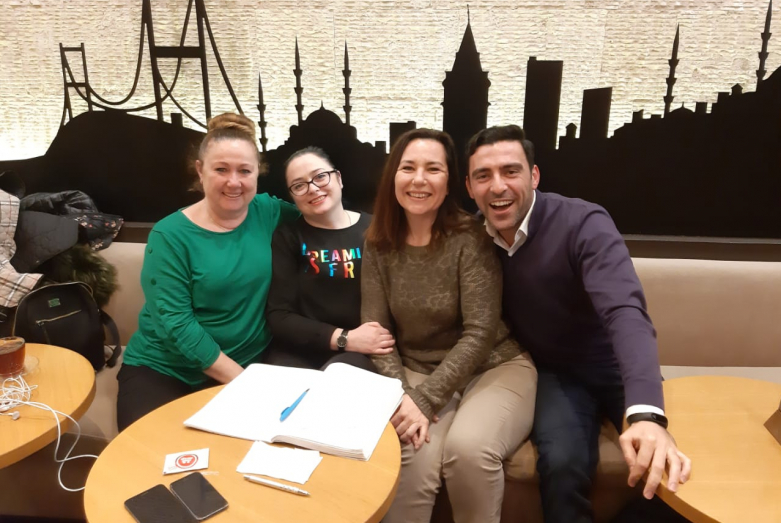 Armed with full support, the author went to Turkey in January 2019 for a month and a half.  During this time, she collected dozens of pages of unique material.

“These are stories about famous politicians, directors, businessmen, bankers, designers, military and scientists.  They are all different, but they have one thing in common: they are all representatives of the Abaza people,” the journalist said.

An example of the essays included in the book is, in particular, the stories of the famous Turkish director Ezel Kove - or Serkan Aikusba, a popular theater and film actor in Turkey;  international sports judge Uur Bganba - and the owner of the Abkhaz restaurant in Istanbul, Khalyuk Sazdba. 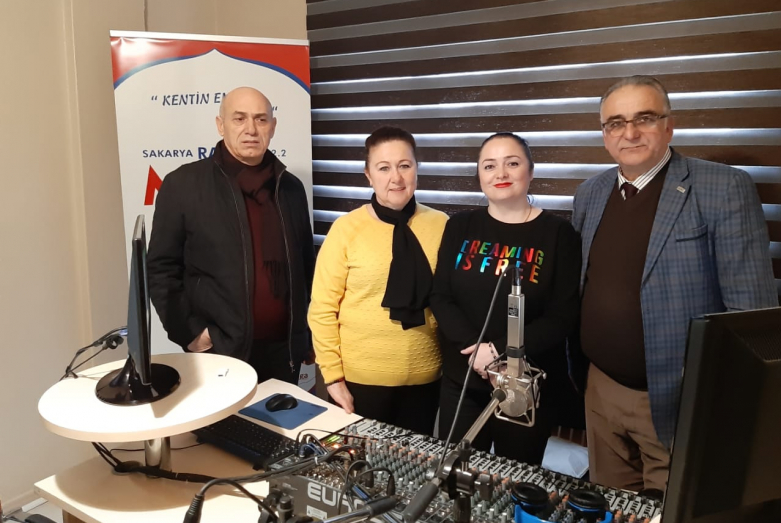 During an interview with the editor of the online newspaper Ada Tavir and Mega Radio in Sakarya County.  In the photo from left to right: Erol Pilia, Yujal Sergegia, Saida Zhiba and Zafer Chkotua
© Saida Zhiba

Among the personalities of the book are veterans of the Patriotic War of the People of Abkhazia: cavalier of the “Order of Leon” Alper Bganba and archaeologist, participant in the PWPA Zeliha Azhiba, who was only 19 years old at the time of the war.  Among scientists and doctors, the book includes the stories of professors Sima Agrba and Ozdan Avidzba, Mukhettin Gechba, director of the Caucasus Research Foundation in Ankara, Erol Kushba, director of book publishing in Istanbul, and Bekir Khapat, specialist in the Ottoman Empire’s archive, as well as the story of Zeki Latsushba, an ophthalmologist who is among the five best in the world.

Among the politicians, an interview for the book was given by the Advisor to the Minister of Health of Turkey, an expert of the Administration of the President of Turkey, Kadir Abagba. The book also included the stories of a military man, now a pensioner, Osman Latsushba and professional boxer Enver Bzagua. 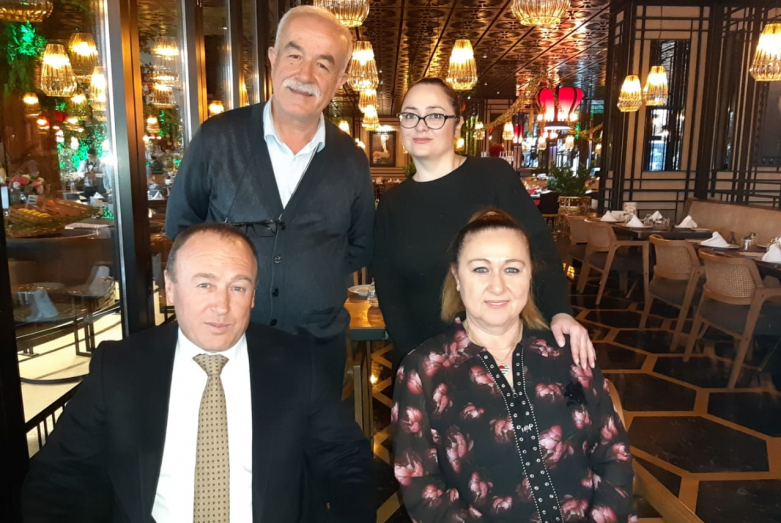 The heroes of the essays are really very different, even by age.  It is extremely interesting that the oldest hero of the book is 106 years old, his name is Lutfiy Azhiba.  Saida Zhiba said that it was especially important for her to talk with him, “because he kept in mind many amazing stories.” Now Lutfiy Azhiba lives with his family in the village of Kayalar near Adapazary.  The youngest heroine of the “Sun Rays” was Nazre Alkin - she is 25 years old and she is the secretary of the president of the famous football club Fenerbahçe.

The journalist worked on the book for about a year.  The album contains 200 contemporary and archival photographs of all the characters.  The publication was published in three languages: Abkhaz, Turkish and Russian.  According to the author, the greatest difficulties in work were just about a certain language barrier. 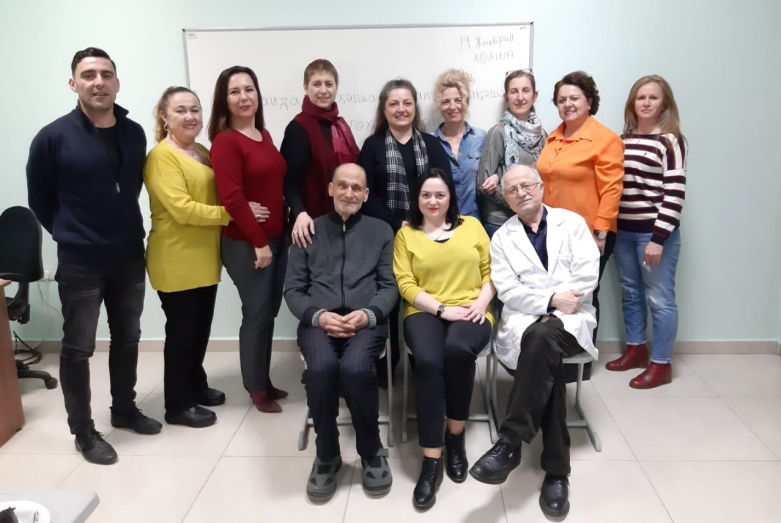 “Some of my heroes speak Abkhaz, but still most of them do not know it.  And I speak Turkish very badly.  Of course, my friends helped me, but all this delayed the process somewhat.  Some conversations lasted for three to four hours,” said Saida Zhiba.

The choice of the name of the book was no coincidence.

“The heroes of the book, sons and daughters of Abkhazia, dispersed around the world, continue to carry the light and warmth of their homeland just like the rays of he sun,” the author explained.

The book of the Abkhaz journalist Saida Zhiba “Sun Rays” was published in a circulation of 300 copies. The author intends to give 200 copies to the heroes of the book and their relatives as well as to the Federation of Abkhaz Cultural Centers in Turkey. 100 copies will be donated to the libraries and museums of Abkhazia and to all who participated in the creation of the book-album.

Real hominy, village cheese and hearth: why one should visit an Abkhaz restaurant in Istanbul
Love, proved by work: Abkhazia in the thoughts and life of Irfan Argun
“Native islands” in a foreign land: what is remarkable about Abkhaz and Abaza villages in Turkey
Abkhaz finds and international congresses of the archaeologist Ece Trapsh