The memory of the victims of the Caucasian War was honored in Abkhazia on May 21 by lighting the traditional Abkhazian candle of Aschamakya on the seashore, as well as the Nart fire.

In the afternoon, within the framework of commemorative events, the Abkhazian Drama Theater also showed the play "The Last of the Departed" based on the historical novel of the same name by Bagrat Shinkuba about the tragic fate of the Ubykh people. It was played by actors of the youth theater.  A photo exhibition was organized at the monument to the victims of the Caucasian War during the day, collecting archive photos and sketches of the events of the war and forced resettlement.

The commemorative events were organized by the World Abaza Congress in cooperation with the State Committee for the Repatriation of Abkhazia. 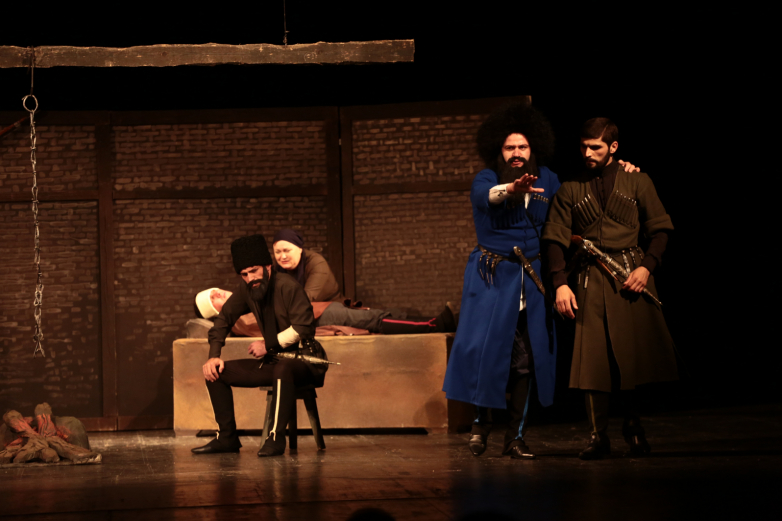 Commemorative events on May 21 began at the Abkhazian Drama Theater. The youth theater presented a performance based on the book of the same name "The Last of the Departed" - the greatest historical novel by Bagrat Shinkuba about the tragic fate of the Ubykh people, which was translated into many languages ​​of the world.
© WAC / Naala Avidzba

"We have not broken, the people are alive"

By the beginning of the evening part of the program, by eight in the evening, the Sukhum embankment was filled with people.  Led by a small cavalry and torchbearers, they lined up in a long column on the square named after Sergey Bagapsh and headed along the embankment to the monument to the Makhadzhirs.

“My friends and I did not plan to go along with the column, we came for a walk, but when we saw all this, without saying a word, we joined the column and went to the monument to the victims of the Caucasian War,” Inessa Bartsyts shared her mood.

Inessa and her company were not the only participants in the march who succumbed to such an impulse and joined the column.  Its ranks were replenished throughout the procession.  The arrival of the column to the monument was marked by the loud sound of Abyk (a folk instrument about 1.5 meters long, which makes a loud, slightly muffled sound, reminiscent of the roar of a buffalo - ed.). 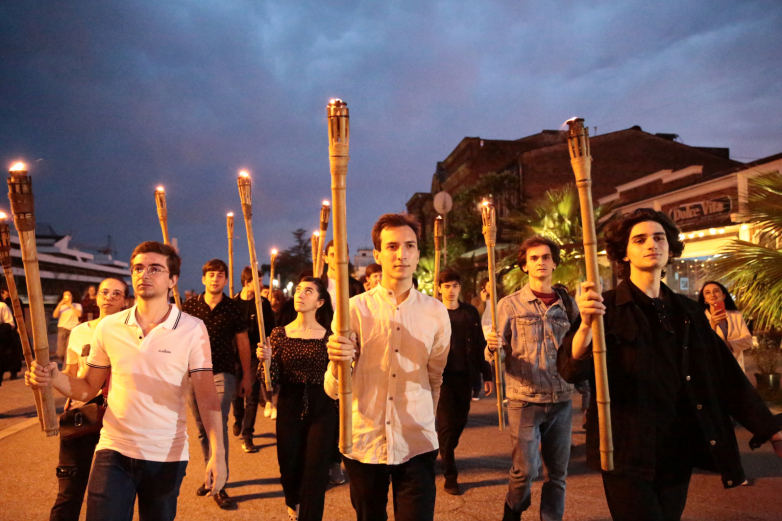 By evening, the Sukhum embankment was filled with people. They gathered on the square named after Sergey Bagapsh and walked in a column along the embankment towards the monument to the victims of the Caucasian War.
© WAC / Naala Avidzba

People also gathered at the monument.  The laying of flowers and wreaths at the memorial began. It was attended by the country's leadership, families of repatriates, members of the World Abkhaz-Abaza Congress, the public.

Rismag Ajinjal, adviser to the president on issues of interaction with veteran volunteers of the North Caucasus, believes that May 21 is "a day to raise the spirit of the Abkhaz people."

“We have not broken, the people are alive, the people will develop, and this commemorative event will eventually become a festive event on the occasion of the return of the repatriates to their homeland,” he expressed hope.

“For our people, for the Caucasus as a whole, this is a very important date.  These events are another opportunity to tell our story, because many, especially young people, know very little about these tragic events.  If we forget our past, we will have no future,” he warned. 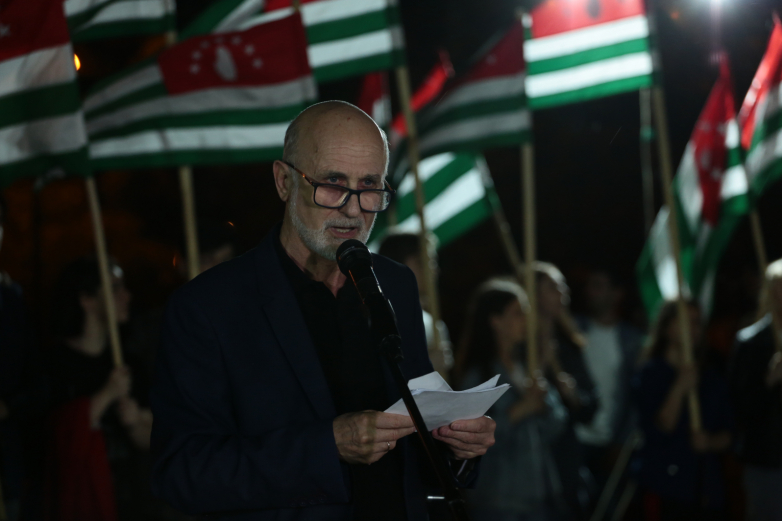 After the laying of wreaths and flowers, the Abkhazian artists performed memorable songs and poems.  The famous Abkhazian singer, soloist of the famous Abkhazian band “Apsny-67” Lyudmila Gunba sang the lullaby "Шьышь нани" - a musical symbol of the tragedy of the entire people and their forced resettlement from their native lands during and after the war.

To this song, a young repatriate from Turkey Kadir Tvanba lit the traditional Ashamakya candle. Then he admitted that he was very worried and all the time, while lighting a candle, he thought about his ancestors, about the events of the times of forced resettlement.

“The events of those years have not been forgotten.  The homeland should always be in our hearts.  And then, wherever we are, the Motherland will be close to us,” he said.

Just as a year ago, the unburned wax threads of the candle were distributed to everyone present. 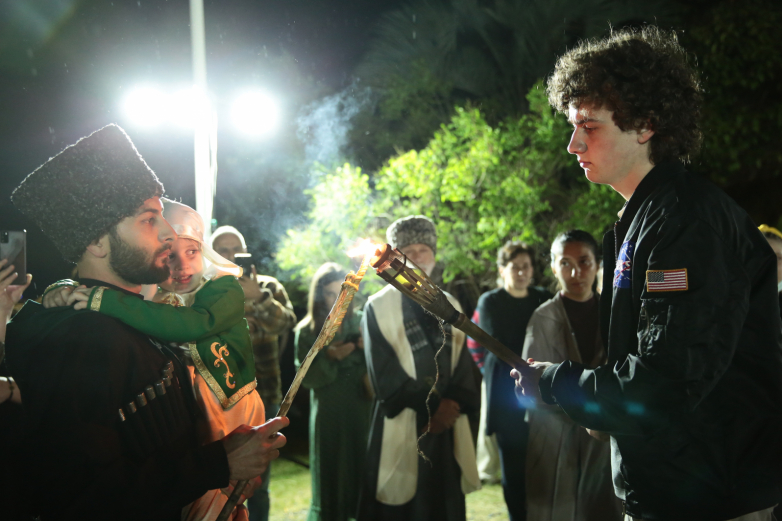 The tradition of lighting the Aschamakya candle on the Day of Remembrance of the Victims of the Caucasian War in the previous year of 2020, was decided to be continued by the World Abaza Congress (for the first time such a candle was lit on the Makhajirs Embankment in 2016 - ed.).  The head of the Women's Councils of the WAC, Geta Ardzinba, noted that the Congress is trying to do everything to ensure that this day "unites as many people as possible, carries the national people’s imprint."

“That is why for the second year now we are lighting Aschamakya, which this year was assembled by the WAC staff together with the keeper of Abkhazian traditions, blacksmith Timur Dzidzaria and a great friend of our organization, Kadyr Argun,” she said.. 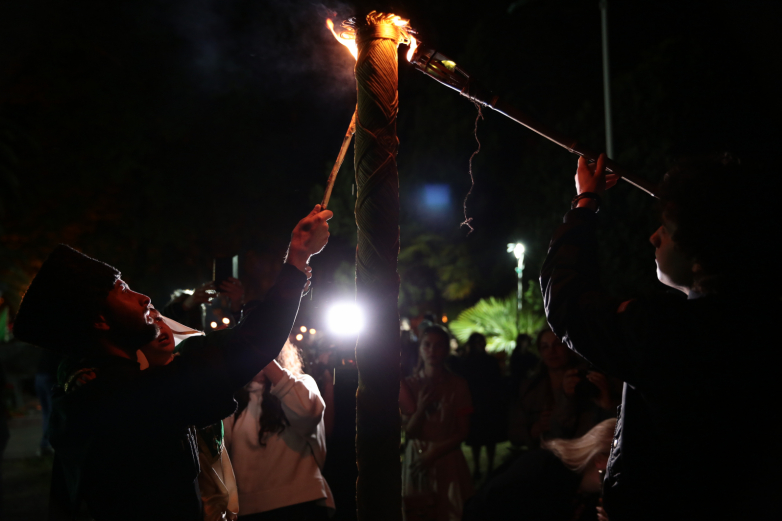 A repatriate from Turkey Kadyr Tvandba lit Aschamakya, a traditional Abkhazian candle. Some of the participants in the event helped him with this procedure.
© WAC / Naala Avidzba

Pass on to future generations

“We are very grateful to everyone who responded.  They also brought schoolchildren with them. It is very important for the children to be here, to observe the emotions of the elders. This is the continuous connection of generations, the connection of times.  And we (WAC - ed.) are very happy that we may be relevant to this,” said Geta Ardzinba. 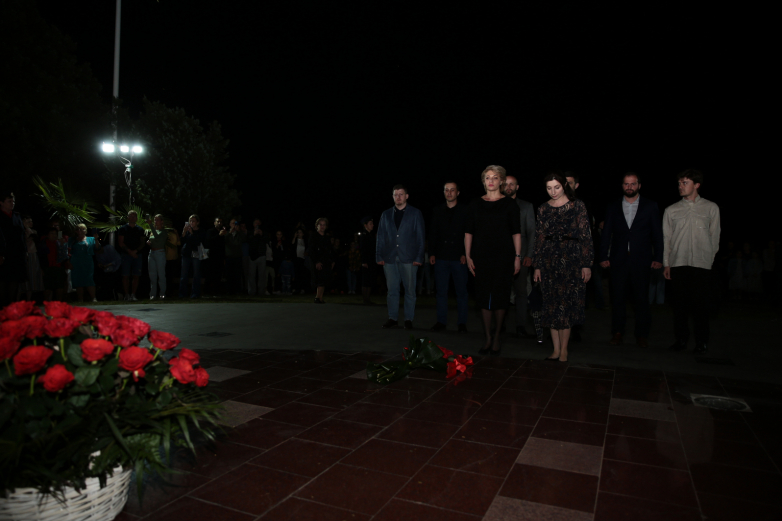 The team of the World Abaza Congress took part in the ceremony of laying flowers at the memorial.
© WAC / Naala Avidzba

A member of the local branch of Dranda, Mziya Tsvizhba, expressed gratitude for the invitation to the World Abaza Congress.

“Everyone should take part in such events.  We arrived with students and teachers.  Our children learned a lot, watched "The Last of the Departed".  Both children and us are overwhelmed with emotions,” Tsvizhba shared her impressions.

The commemorative events ended with the descent of wreaths into the sea and the lighting of the traditional Nart bonfire from the legends of the Nart epos. 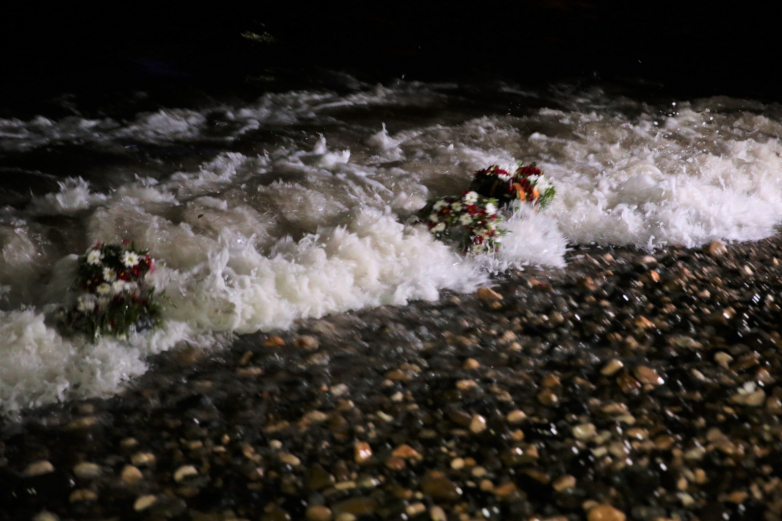 The memory of the victims of the Caucasian War is celebrated annually on May 21.  On this day in 1864, in the Kbaada tract (now Krasnaya Polyana in Russia - ed.), A military parade was held in honor of the end of the half-century Caucasian War of 1817-1864, which forever deprived hundreds of thousands of people of their historical homeland. Entire families moved to the Ottoman Empire, and from there life scattered them all over the world.

Day of sorrow for the victims of the Caucasian War
To leave a comment you need
to login or register.
Share
No comments