The symbol of victory, unity and fraternity: Flag Day was celebrated in Abkhazia

The national flag day is annually celebrated by the Abkhaz-Abaza people throughout the world. A report by the information portal of the WAC on how it was celebrated this year in Abkhazia.

Abkhazians joyfully, largely and with special pride celebrate the July 23, because this is the day of the national flag of the Republic.

First time it was celebrated in 2005: at that time the second president of Abkhazia, Sergey Bagapsh, signed the Law "On Making Amendments and Additions to the Law of the Republic of Abkhazia "On Memorable and Public Holidays in the Republic of Abkhazia" passed by the Parliament. The modern Abkhaz flag was presented and approved on July 23, 1992, when the historic meeting of the Supreme Council of Abkhazia took place. 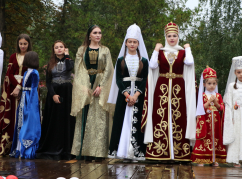 In the flag colors

The national holiday is celebrated widely. This date is a day of merrymaking, festivities and concerts. Some residents of Abkhazia hold festive demonstrations with a flag, while others dress in traditional colors of the flag. The same was this year. On a festive day, the Sukhum promenade is filled with young people, guests and citizens who "turned" into a red-green-white sea of ​​people.

The official part of the holiday was held on the Sergey Bagapsh square, with the participation of the Head of the Republic, the Speaker of the Parliament, deputies.

It was very solemn. A horse column with the national flag of Abkhazia passed along the Quay of the Makhadzhirs. Riders passed the flag to the chief of the Guard of Honor Company, who handed it over to the President of Abkhazia, Raul Khadzhimba. After raising the flag on the flagpole the President congratulated everyone present to the sounds of the national anthem.

"There are a lot of memorable events in the history of Abkhazia, which take a special place in our development, including dates associated with state symbols. Today, the National Flag of the Republic of Abkhazia is waiving over our homeland, like a proud eagle's flight!", the head of state said in his congratulatory speech.

He spoke about the role of the leaders of the national liberation movement led by the eminent Vladislav Ardzinba, thanks to whom Abkhazia was able to bravely overcome all obstacles.

"Let our sacred native land of Apsny grow stronger and flourish! Let the new successes of young people go ahead under our flag!" the President wished everyone present. Celebration of the tricolor: the day of the flag of Abkhazia in Sukhum is celebrated with songs and dances

As part of the celebration of the Flag Day in Sukhum, a video-link "Sukhum-Eskishehir-Cherkessk-Amman" was held from the places of compact residence of the Abkhaz-Abaza Diaspora, during which, in particular, the chairman of "Diuan Abaza" in Jordan, Hasan Hussein Chichba Abaza congratulated the people of Abkhazia with the national holiday.

"Peace to you, our brothers and sisters, representatives of the Abaza people living in Abkhazia and in other countries of the world! On this special day, we want to honor the memory of our brothers who gave their lives for the liberation of Abkhazia and the restoration of the rights of our people on the Abkhazian land. Accept our sincere congratulations," said Chichba.

For a country the flag is a symbol of freedom and independence. This was said by the Parliament Speaker Valery Kvarchia.

"I remember the day when the flag was submitted for approval to the Parliament, the people who were in the hall." It was necessary to look not at the flag itself, but at the emotions that it caused. "That day there was a turning point in people's minds. The ones who did not doubt that we will achieve freedom and independence, gained determination," said Kvarchia.

Member of the national liberation movement, veteran of the Patriotic War of the people of Abkhazia Zakan Nanba is confident that the flag appeared at the right time.

"Our flag became a symbol of the national liberation movement, a symbol of Victory, a symbol of unity and brotherhood. The flag was approved before the war, and many of our soldiers perished so that today we could celebrate our holiday," Nanba said.

The veteran added that he regards the Abkhazian flag as the most beautiful flag in the world.

The day of the Abkhazian flag is a very bright holiday, which every Abkhaz is happy with, Sukhum resident Victoria Malania is confident.

"It is very important for our young state that our flag be on par with the flags of other countries, I am pleased that our people are celebrating the Flag Day so touchingly and solemnly," Malania said. 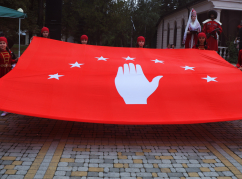 Songs, Dances and Fair: Day of Culture and Day of the Abkhazian Flag in the KChR

There was also a room for charity at the Flag’s Day celebration: an exhibition - sale of paintings by the wards of the Charity Fund "Ashana" and the Sukhum Rehabilitation Center took place. Turkish sweets were also sold on the square, the proceeds from which will be directed to the treatment of one of the wards of the fund.

Around the stage an exhibition was organized from the funds of the open-air museums of Abkhazia, which allowed the guests to plunge into the history of Abkhazia. Utensils of the Abkhazian way of life, national costumes and headgears - all these could be touched and photographed.

Festive events were completed by a festive concert with the participation of the stars of the Abkhazian stage and dance groups.

Flag Day of Abkhazia Sukhum Holidays
To leave a comment you need
to login or register.
Share
No comments