Representatives of the World Abaza Congress met with members of the Abkhaz-Abaza and Circassian Diasporas in the Syrian Arab Republic.

Inar Gitsba, Executive Secretary of the World Abaza Congress, and Inver Alshundba, a member of the Supreme Council of the WAC, met with representatives of the Abkhaz-Abaza and Circassian Diasporas in the Syrian Arab Republic (SAR) on Tuesday October 6 in Damascus, at the newly opened Embassy of the Republic of Abkhazia in Syria.

At the beginning of the meeting, representatives of the Congress conveyed a welcoming speech from the Chairman of the Supreme Council of the WAC Mussa Ekzekov, and then spoke in detail about the goals and objectives of the Congress, its activities, successfully implemented projects and plans.

Representatives of the Diasporas, in turn, showed great interest in the work of the WAC, asked numerous questions, and also expressed their full readiness to implement joint projects.

Commenting on the agenda of the meeting, Inar Gitsba noted that the issue of establishing a regional branch of the WAC in the Syrian Arab Republic was discussed.

"We agreed that this issue should be discussed in more detail and the necessary preparatory work should be carried out. Representatives of the Diaspora will soon meet in a wider composition in the Circassian public organization of Syria "Adyghe Khasa", whose members are not only representatives of the fraternal peoples of the North Caucasus, but also the Abkhaz-Abaza ethnos," Gitsba said.

A member of the Supreme Council of the WAC, Inver Alshundba, in turn, added that at the meeting it was decided to work out a protocol of mutual cooperation between the WAC and "Adyghe Khasa".

"In the near future the text of this document will be prepared by both sides. All efforts are directed for the benefit of our people, in the name of the idea of ​​uniting the Abkhaz-Abaza people," he said.

For further interaction, a working group was created, which included six representatives of the Syrian Diaspora. Inar Gitsba explained that joint projects will be developed within the committee.

"Our compatriots were interested in the possibility of organizing courses for the study of the Abkhazian and Abaza languages ​​on the basis of the public organization "Adyghe Khasa".  They said that they already taught Adyghe, Russian and English, and they would very much like to have more Abkhazian and Abaza," added the Executive Secretary of the WAC. 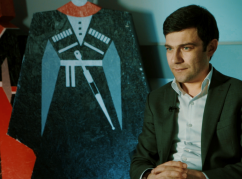 Inar Gitsba: every year ties between compatriots are growing stronger

Following the meeting, it was decided to work out two more issues: the possibility of training representatives of the Abkhaz-Abaza Diaspora in Syria at the Abkhazian State University and the opportunity to organize a summer camp in Abkhazia for Abkhaz-Abaza and Circassian children from Syria.

During the visit to Syria, representatives of the World Abaza Congress handed over to the President of the Syrian Arab Republic Bashar Assad a memorable gift and a welcome address from the Chairman of the Supreme Council of the WAC Mussa Ekzekov.

The visit of the WAC members to the Syrian Arab Republic took place in connection with the opening of the Embassy of the Republic of Abkhazia in Damascus. The embassy was opened on the same day, October 6, in Damascus. The opening ceremony was attended by Deputy Chairman of the Council of Ministers, Minister of Foreign Affairs and Expatriates of the SAR Walid al-Muallem, Assistant to the Minister of Foreign Affairs and Expatriates Ayman Susan, heads of diplomatic missions of the Russian Federation, Venezuela and Cuba accredited in Syria.