About Abkhazia with love: a festival of Abkhaz culture was held in the center of Moscow

The second open festival of Abkhaz culture "Apsny" was held in Moscow in the park "Krasnaya Presnya" on Sunday, June 30.  The festival was organized by the Moscow Abkhaz Diaspora (MAD) with the support of the Embassy of the Republic of Abkhazia in the Russian Federation, the Government and the Department of Culture of the City of Moscow, the Ministry of Culture and Protection of Historical and Cultural Heritage of Abkhazia and the Ministry of Resorts and Tourism of Abkhazia.

Commenting on the event, the head of the Moscow Abkhaz Diaspora Beslan Agrba emphasized that such events are very important for the popularization of Abkhazia.

“People personally come into contact with elements of Abkhaz culture, they see representatives of the nation, communicate with them.  This festival creates direct emotion, direct contact with people, and it is a very effective tool for people to understand another people, another ethnic group,” said Agrba.

He noted that the main tasks of the festival are to show the Abkhaz culture to the Muscovites and give the natives of Abkhazia living in Moscow to feel “for one day, but still at home”. 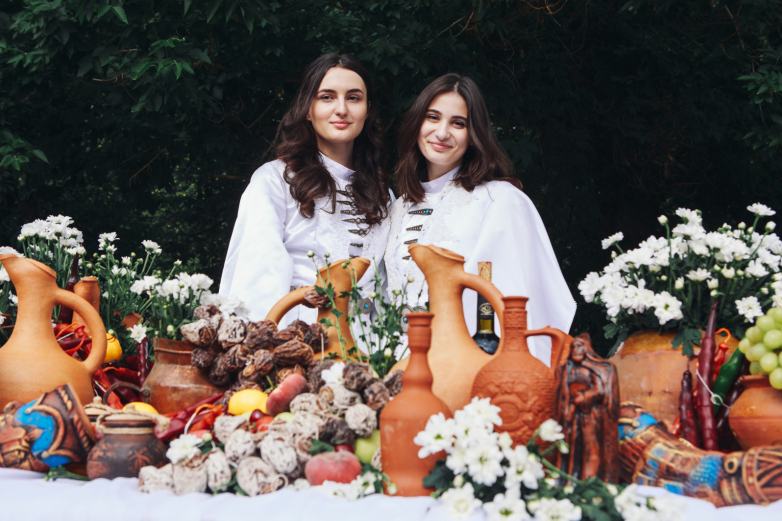 “A lot of people gathered.  According to preliminary estimates, more than 10 thousand people,” he said.

The main difference of this festival from the first Beslan Agrba called the more active participation of Abaza in it.  According to the head of the MAD, this year the pavilion of the Abaza national cuisine and the Abaza national dances were presented for the first time at the festival site. 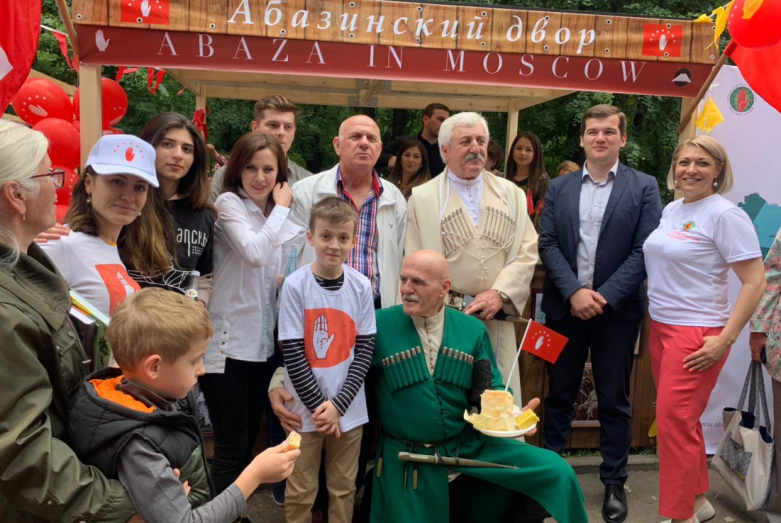 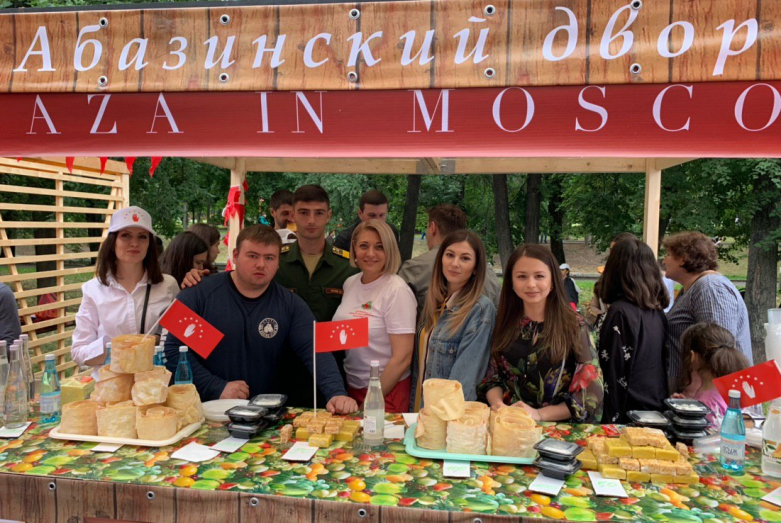 With a special mission, the festival was visited by the Deputy Minister for Resorts and Tourism of Abkhazia, Astamur Bartsyts.  On behalf of the Ministry, he played out a trip to Abkhazia to the famous resort of Pitsunda among the participants of the holiday.  The winner of the prize was a guest of Moscow - a resident of the city of Samara Ekaterina Gridisova.

“There were still many different prizes.  In general, I want to note that such events are especially important for attracting tourist traffic to our country.  The organizers managed to demonstrate the authenticity of our country.  The festival was organized at the highest level, and this, of course, is an excellent image component of Abkhazia as a tourist country,” added Bartsyts. The well-known singer, composer, soloist of the Russian group “Nepara”, the honored artist of Abkhazia Alexander Shoua, noted  the high level of organization of the festival “Apsny”.  He said that to perform at this site was his personal initiative.

“I sang three of my songs, including the song “Са сгәы иҭаз” (What was in my heart - ed.) in the Abkhaz language.  Before the performance I was able to walk through the park and get to know the festival more closely.  I enjoyed socializing with people, tried national dishes, Abkhaz wines, met many friends from Abkhazia.  I was with my Moscow friends, they were delighted, they wanted to learn more about Abkhazia.  I am glad that there is such a festival,” shared Shoua.

Young and already known for her participation in the “You are super!” Show on the NTV channel, Abkhaz singer Valeria Adleyba sang the song “Сгәаҵа иҭоу” (What is in my heart - ed.), and once again won the hearts of listeners.

“The festival gives all guests the feeling that you are in Abkhazia.  I was glad to take part in it.  It is great that the residents and guests of Moscow had the opportunity to get acquainted with our culture.  During the performances we were supported a lot, especially when we sang Abkhaz songs. People shouted "bravo", - said Valeria. 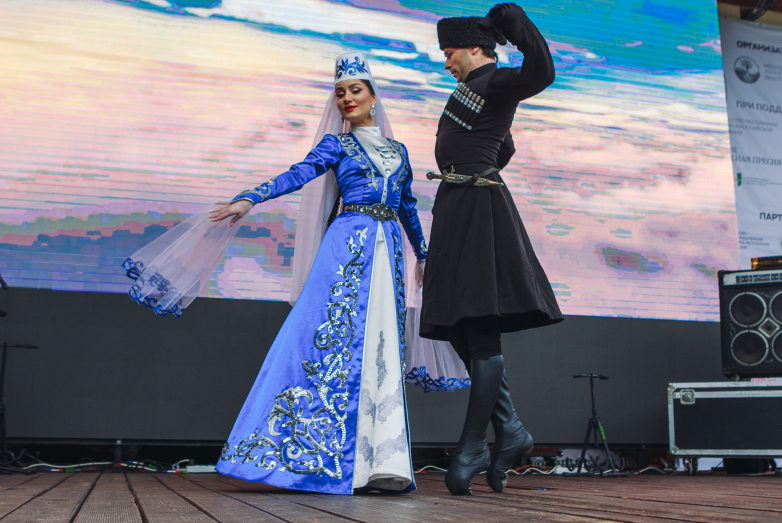 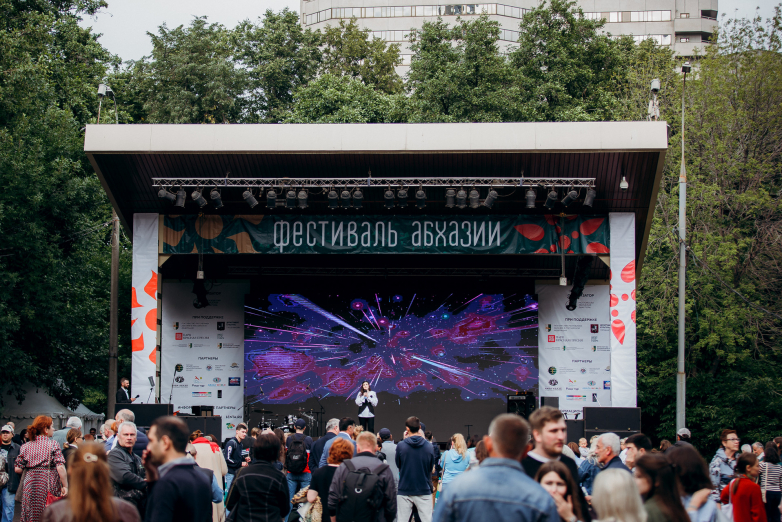 The festival included interactive Abkhaz lessons from the Innovative School Capital school center and the Online School of the Abkhaz language “Alasharbaga”, cooking and dance workshops, a lesson of playing the Abkhaz drum — adaul, and an improvised Abkhaz wedding with all the features and traditional rites inherent in it.  Visitors to the event tried traditional Abkhaz cuisine, learned more about Abkhaz cinema and Caucasian yoga. 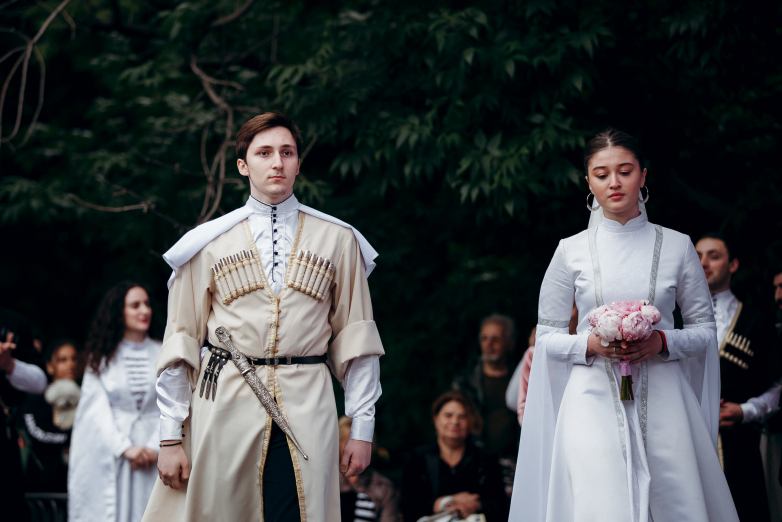 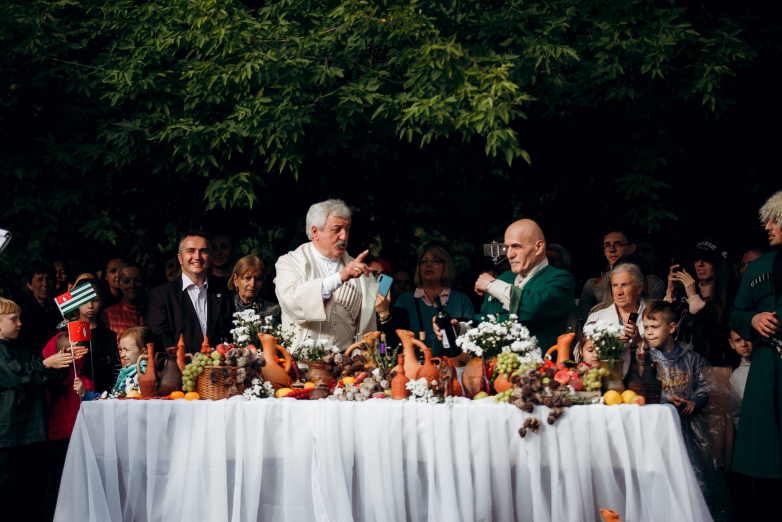 Timur Kvekveskiri, a well-known Abkhaz director, chairman of the State Committee on Youth Policy, one of the organizers of the festival, noted that the main idea of ​​the festival is to acquaint the residents and guests of the Russian capital with the traditions and customs of Abkhazia.

“This is another platform that allowed us to advertise our country, to talk about it.  There were a lot of people, everyone was very happy.  Despite a light rain, no one left, with great curiosity watched everything that happened, especially the Abkhaz dances.  The most popular was the pavilion with dishes of Abkhaz national cuisine,” noted Kvekveskiri.

The gastronomic festival was arranged by the Abkhaz  restaurant “Acha-Chacha” in Moscow.  The guests could not only taste the traditional dishes of the Abkhazian cuisine - Ayladzh, Achashv, Mamaliga, but also take part in the Ajinjukh cooking classes (Abkhaz dessert - nuts strung on a string and covered with thick grape juice porridge - ed.) and  Abkhaz dumplings with cheese - "ачаҳаржәқәа". 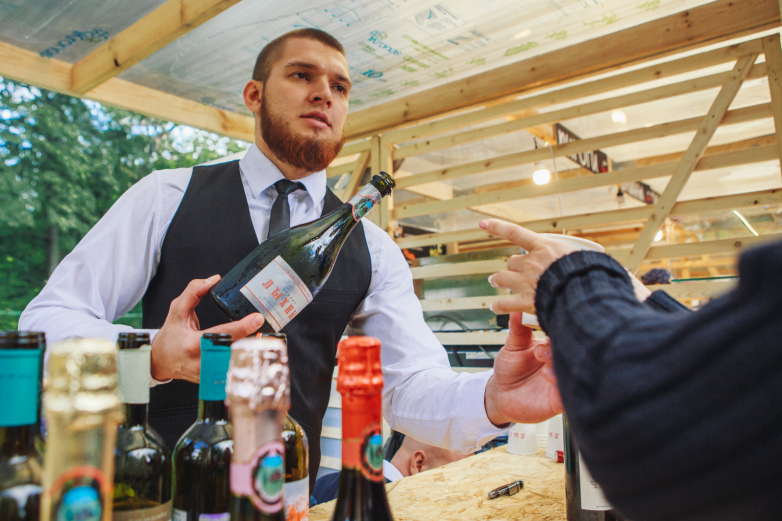 The festival was visited by many natives of Abkhazia living in Moscow.

“I plunged into the atmosphere of my Homeland for the whole evening, for which many thanks to all the organizers.  I was proud: it is nice that through the prism of this festival, Abkhazia will be more closely recognized in Moscow.  Of course, it was especially pleasant, looking into the pavilions of the festival, to meet friends.  It was a grand celebration that did not leave anyone indifferent.  My Moscow friends will remain impressed for a long time,” said a native of Abkhazia, a resident of Moscow Zhanna Bargandzhia, shared her mood. 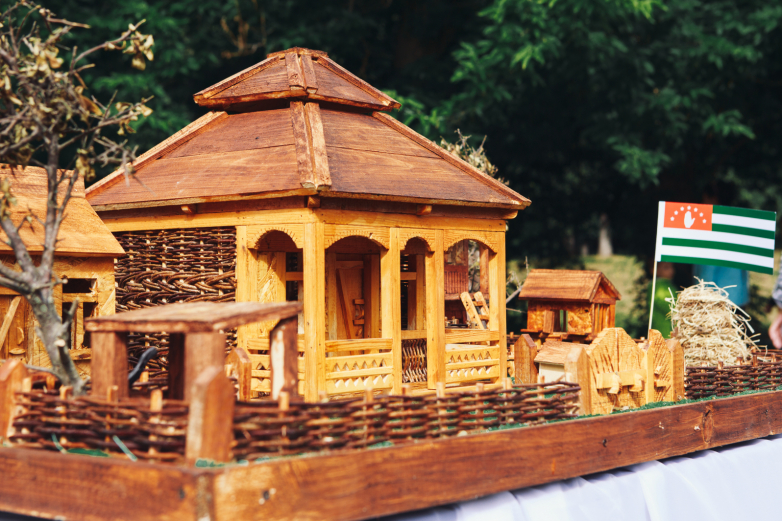 WAC at the festival site

Like last year, the World Abaza Congress took part in the festival.  The chief of staff of the Chairman of the Supreme Council of the WAC, Kan Tania, said that all guests of the festival had the opportunity to join the Congress.  According to him, more than 50 people joined the ranks of the WAC for that day.

“The pavilion prepared by the Congress attracted the attention of visitors with a resettlement card of the Abkhaz-Abaza people, a book about the history of creation and current activities of the WAC, an exciting quiz and, of course, national food,” said Tania. 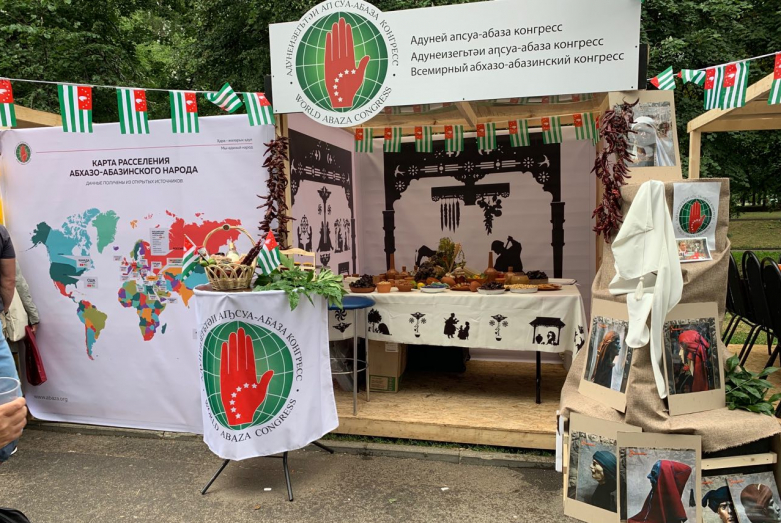 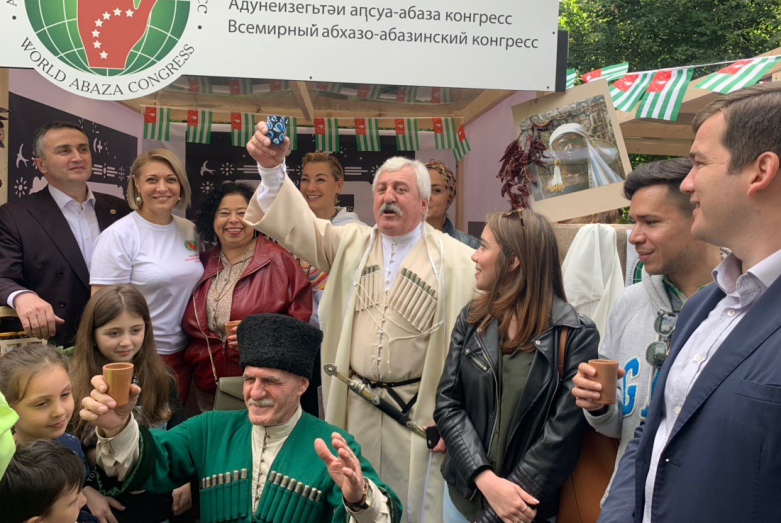 Walk on the Sukhum promenade and “Mountains of Abkhazia”

Like last year, the festival of Abkhaz culture showed the beauty of Abkhazia to its guests.  Director of the “Mountain of Abkhazia” Foundation Tengiz Tarba told the guests of the Apsny festival about mountain tourism: trekking, rafting, canyoning, skitourism and freeride.  In the central alley of the Krasnaya Presnya Park, everyone could get acquainted with the Tengiz’s “Mountain Abkhazia” photo exhibition.

Can the story of Abkhazia be considered complete if you don’t show the famous Sukhum promenade?  The organizers erected an improvised “Sukhum promenade” and launched an exhibition of paintings by Abkhaz artists on it.  All this has become one of the bright “strokes” to the overall picture of the motherland and at home.

“At one point, tears filled my eyes.  For us [Abkhaz living in Moscow] it is a real gift.  We are far from the homeland and our loved ones - and there is such a surprise.  Thank you very much!”- so appreciated the idea of ​​the “promenade” by the guest of the holiday Elana Jinjua. The festival organizers also took care of the youngest visitors.  Especially for them, there was a children's area with animators and creative workshops.  The children played the national Abkhaz games, learned how to make crafts from shells, and took part in a workshop on making traditional toys.

“I came here with my mother.  I liked everything very much: interesting, colorful and fun.  Most of all I liked making toys,” eight-year-old Malika Darcham, a native of Abkhazia who lives in Moscow, shared her impressions. The festival of Abkhaz culture was held in Moscow for the second time.  The first open festival “Apsny” took place in the capital of Russia nine months ago, on September 30, 2018, and was timed to the 25th anniversary of the Victory and Independence Day of Abkhazia.  Then more than 50 people took part in its organization, and the number of its participants was about eight thousand people.

60 years of guarding the interests of the people: Moscow Abkhazian Diaspora celebrated its jubilee
Moscow morning at «Brekhalovka»: how was the festival of Abkhaz culture «Apsny»
Oriental coffee, or learning how to make ayladzh: photo report from the «Apsny» festival
Beslan Agrba: the success of Abkhazia is my duty too