Vladimir Avidzba: I didn’t feel like a stranger in Turkey even for a second

On the eve of the 82nd anniversary of Vladimir Avidzba, the WAC web information portal interviewed this brilliant politician and man.

A Soviet party and Abkhaz politician, diplomat, candidate of historical sciences, member of the Union of Journalists of the USSR, deputy of the Supreme Council of Abkhazia Vladimir Avidzba, on the eve of his birthday, told the WAC about his life journey, filled with bright events.

– Vladimir Dzhamalovich, please tell us about your childhood.

– Childhood was like everyone’s else: playing with friends, with some of them we are still friends today.  For example, with Rauf Abuhba, we carried friendship throughout our lives.  Most of all from childhood I remember the period when I went to school.  That was in 1945.  I finished the first grade as a straight-A student, was the best student in the class.  I studied at the Verkhneesherskaya eight-year school, now it is a secondary general education.  So, I remember well how we were forced to learn Georgian language alien to us, forbidden to speak Abkhaz.  All this is very much bumped into my memory for life. 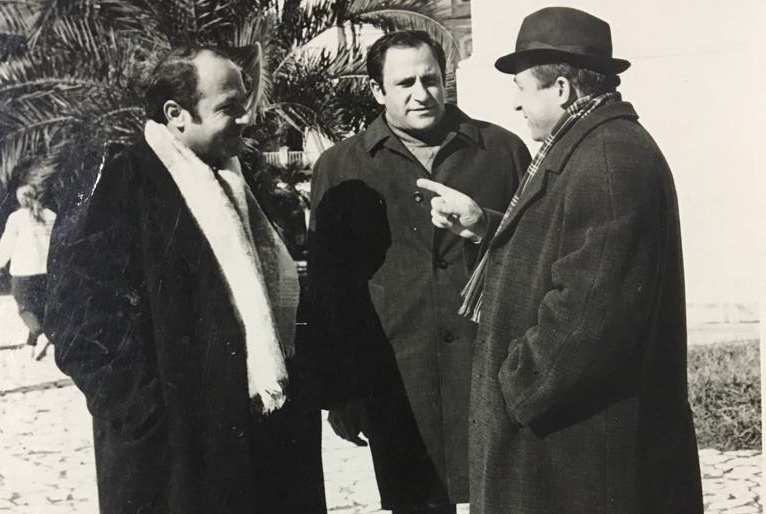 – Immediately after school, you began to play in the Abkhaz drama theater.  Was there any intention to continue studying?

– After school I tried to enter the Georgian Agricultural Institute.  I had a seat (in the USSR there was a practice when the state allocated funds for training some applicants for the required specialties - ed.).  But for some reason, we - the seat owners - were not accepted to the institute.  I went back.  My mother really didn’t want me to stay at the collective farm, and my uncle, Aziz Agrba, was the main director of the Abkhaz drama theater.  Mom asked him to help me to get a job.  I came to him for an interview, and on the same day he took me to work as an actor.  That was in 1956.  I really liked this work, I loved the theater.  The situation was good, we were surrounded by such great actors as Leo Kaslandzia, Sharah Pachalia, Minadora Zukhba, Roznbey Agrba.  It was with great pleasure that I played the role of captain Miletsky in the play “The Black Guest” by Georgy Gulia.  But despite the fact that I liked all this, I was more drawn to politics. 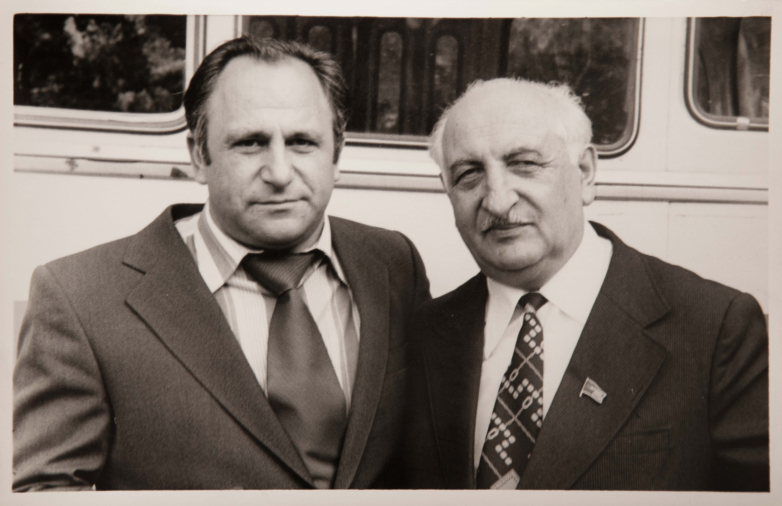 Vladimir Avidzba and Bagrat Shinkuba
© From the Avidzba family archive 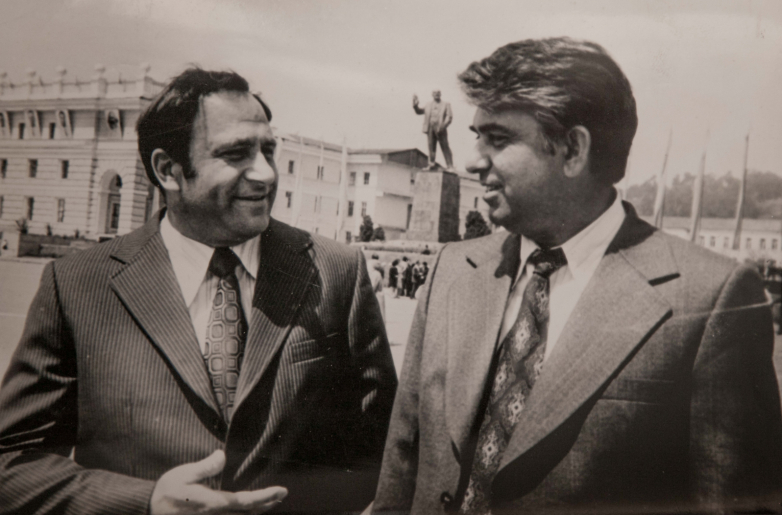 Vladimir Avidzba and Shalodia Ajinjal
© From the Avidzba family archive 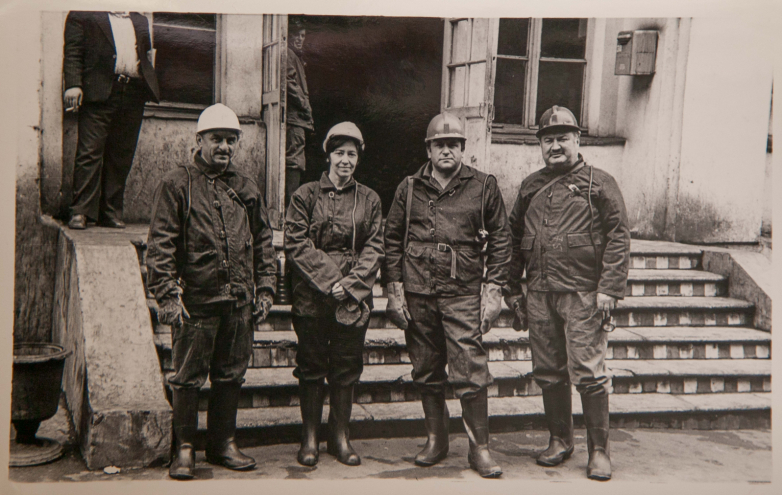 Vladimir Avidzba and workers of the Tkuarchal mine (second from left, Asya Ardzinba), Tkuarchal, 1980s
© From the Avidzba family archive

– How did you get into politics?

– While working at the theater, I entered the Faculty of Philology of the Sukhum State Pedagogical Institute.  I was an activist of the Komsomol work, I was invited to meetings at the Komsomol regional committee, at the Central Committee of the Komsomol of Georgia.  In general, all this Komsomol bustle attracted more than the theater.  After graduation, I was invited to work in the Komsomol district committee and two weeks later I was elected second secretary of the Sukhum district Komsomol committee.  After the Sukhum District Committee was disbanded, we were joined to Ochamchira, I was the second secretary of the Ochamchira Industrial Committee there.  But it did not work out.

At the same time, Georgy Dzidzaria (an outstanding Abkhaz political and public figure - ed.), suggested that I go to graduate school.  He knew me, invited me to his place, we talked.  In the end, I took part in the contest and entered.  After graduating from the graduate school, somewhere in half a year I was sent to the editorial office of the newspaper “Apsny-Kapsh”, the head of the propaganda department.  I worked in the editorial board for 10 years.  Of these, I was the head of the department for seven years and deputy editor for three years.  Of all my posts, what I liked most was journalistic work. 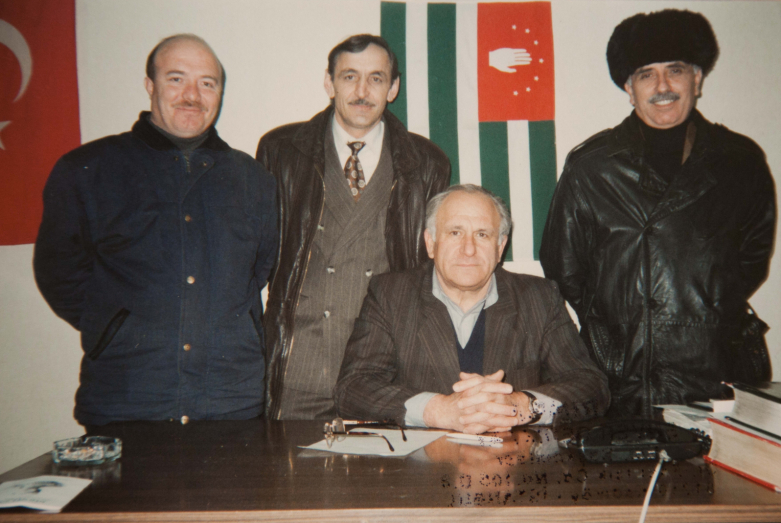 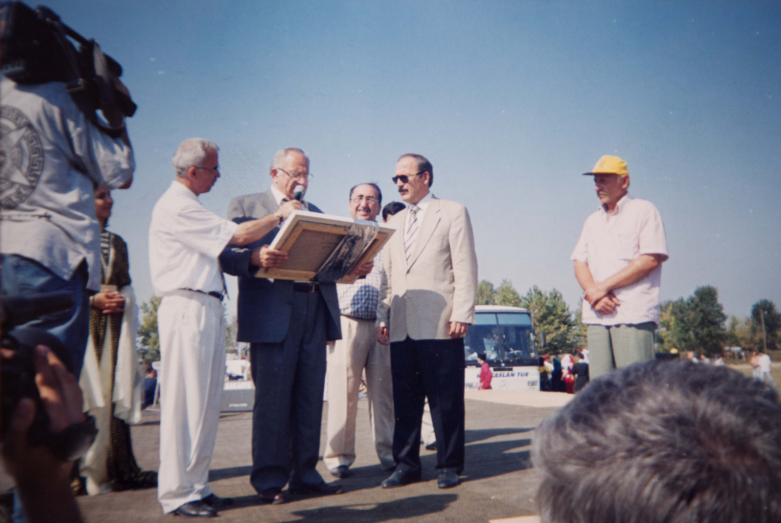 Plenipotentiary Representative of Abkhazia in Turkey, Vladimir Avidzba, presents a picture of the Abkhaz artist to the Minister of Agriculture of Turkey Mustafa Tashar as a sign of gratitude, who spoke in the Mejlis (Turkish parliament) in defense of Abkhazia, Akbalik, 1998-1999
© From the Avidzba family archive – It was a difficult period of Georgian oppression.  Was it difficult to work in an Abkhaz newspaper?

– It was not easy.  But the newspaper published the brightest representatives of the Abkhaz intelligentsia.  The newspaper was in great demand, despite all the difficulties, we worked.

– Tell us about your work as the first secretary of the Tkuarchal City Party Committee.

– I worked there for five years and one month.  I was engaged in energy, mined coal, built buildings and factories.  The duties of the first secretary was literally about everything.  I was responsible for everything.  In the five years that I worked there, we built two factories.  The work was hard, but then Tkuarchal was alive, its population was 25 thousand people.  Today, the town, unfortunately, is dying out; five to six thousand people live in it. 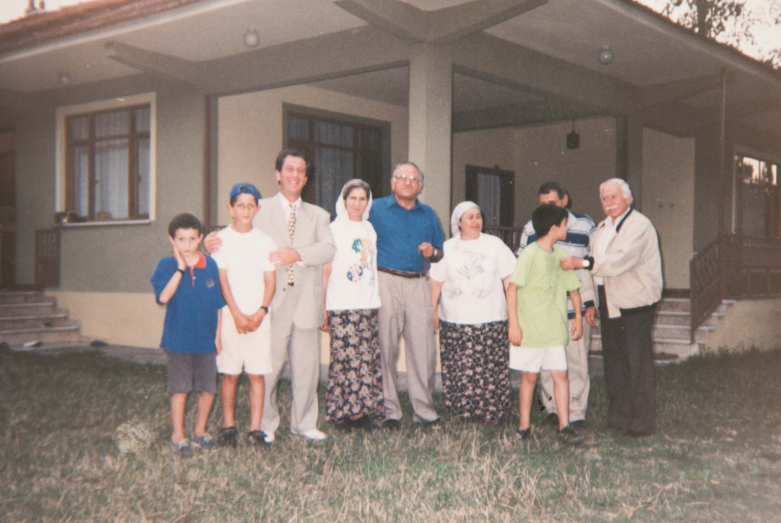 Meeting of Aslan Kobakhia, Vladimir Avidzba and Enver Darmba with the Abkhaz family, Turkey, July 1998
© From the Avidzba family archive At the meeting with an Abkhaz family in Turkey, Liliana Yakovleva, Givi Dopua, Vladimir Avidzba
© From the Avidzba family archive

– A significant part of your life, from 1994 to 2014, you worked as the plenipotentiary representative of the Republic of Abkhazia in the Turkish Republic.  How did it happen that you left for Turkey?

– The first president of Abkhazia, Vladislav Ardzinba, several times invited me to his meetings.  This was already after the end of the Patriotic War of the people of Abkhazia.  He asked me where I would like to work, he treated me very well.  We were also fellow villagers with him.  It was then that I said that, if possible, I would like to represent Abkhazia in Turkey. 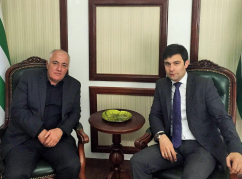 Plenipotentiary Representative Office of Abkhazia in Turkey: quarter of a century of work

– When I was in graduate school, I went home to Eshera every weekend.  Mother helped, in general, I was very attached to the mother. My aunt lived with us.  During one of my visits, my aunt gave me a letter addressed to my father and asked me to read.  It was written by a Turk who was married to an Abkhaz woman who used to live in Eshera, and in 1936 (during the Stalin’s repressions - ed.) was forced to leave for Turkey.  In a letter written in 1961, he was interested in the fate of his friends.  I read this letter and could not find a place for myself, it impressed me very much.  On the same day I wrote him an answer in which he asked for help in finding contacts of my namesakes in Turkey.  And so began my communication with our Diaspora in Turkey.  By the time I spoke with Ardzinba about working in Turkey, I already corresponded with almost three hundred of our compatriots from Turkey. – Did you know Turkish?

– I knew it since childhood.  In the village, my neighbors were Turks, they spoke Turkish to us.  There were children, my peers, who also spoke Turkish with me, and there were several people at school.  So I learned it slowly.  They forbade us to speak Abkhaz among themselves, and we discussed some secrets and something important in Turkish.  I have not forgotten it.  When I entered graduate school, knowledge of Turkish became my main trump card.

– Leaving for Turkey, you already had a family?

– Yes, I had a family, two children.  And I went alone.  On the one hand, I was pleased with the opportunity to become a pioneer of Abkhaz diplomacy in Turkey, but at the same time this responsibility put a lot of pressure on me.

– Did you miss home?

– Children and wife came whenever possible.  And so all 20 years.  But in Turkey I did not feel like a stranger even for a second.  They accepted me, and I dissolved among my brothers.  I missed being in Turkey, most of all, my [dear] people, the Abkhaz intelligentsia [at home], theater,  books. 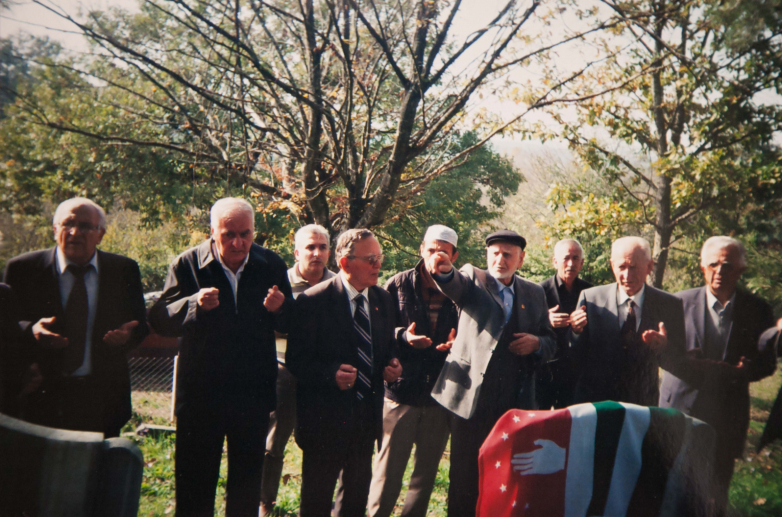 Funeral of the first dead volunteer from Turkey, the hero of Abkhazia Efkan Tsyba
© From the Avidzba family archive – Vladimir Dzhamalovich, I know that you described all the years in Turkey in your diary and plan to publish it - when?

– At the end of the year or at the beginning of the next one - I reread it, make edits.

– What is it about, basically?

– About what worried me the most about what I felt about the events that I witnessed to become.  It is more about the problems experienced by the Abkhaz Diaspora in Turkey.

– How do you evaluate your work in Turkey?

– Somehow, [during my stay there], I was sitting in my office, I was not in the mood, I was upset.  One activist, a Turkish Abkhaz woman, came to me.  She noticed that I was sad and wondered what was the matter.  I said that I was not completely satisfied with my work, I didn’t manage to accomplish much.  To which she replied to me: “You can compare what our idea of ​​Abkhazia was here before you arrived - and how we correctly feel Abkhazia today.”  I think this is my main contribution. 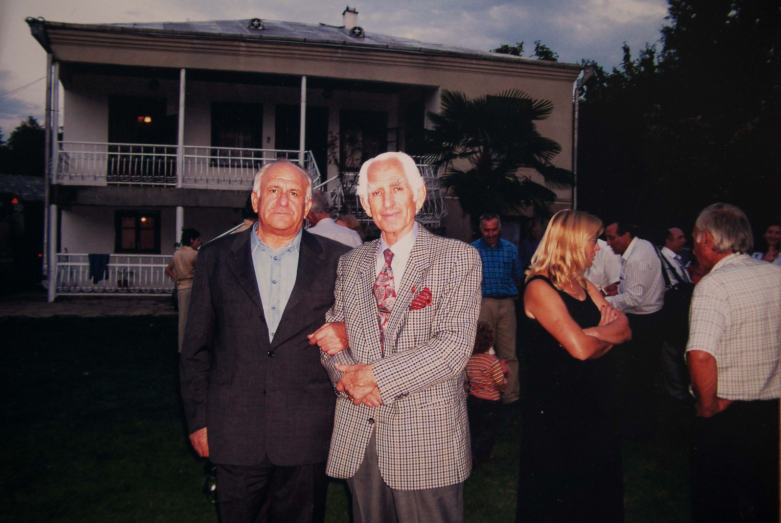 – Vladimir Dzhamalovich, what do you do today?

– I am the chief scientist of the department of source study at the Abkhaz Institute of Humanitarian Studies.  I am already aged, I need to rest more.  I am mostly working on my diary.  All that I write is only about work in Turkey.  I am writing, realizing that no one but me will describe everything that I learned and saw.

– Tell us about your family

– My wife is a journalist - Liliana Yakovleva.  My daughter works in the Embassy of Abkhazia in Russia, the son - in the Customs Committee of Abkhazia.  The son is married.  We live peacefully.  It bothers me that I have no grandchildren yet, but I hope I will have them soon. At the meeting with an Abkhaz family in Turkey, Liliana Yakovleva, Givi Dopua, Vladimir Avidzba
© From the Avidzba family archive – A birthday for each person is always a reason to summarize intermediate results of life.  How do you evaluate your life path?

– If I had to go all over again, I would not have changed anything.  I am 82 years old, and I am satisfied with life.

– What would you like to wish yourself on your birthday?

– Grandchildren - and nothing more.  I have everything I need.