Yuri Kalmykov: a great friend of Abkhazia and a great son of the Caucasus

A lawyer, politician, defender of the national interests of the peoples of the Caucasus, an outstanding Adyg (Circassian) Yuri Kalmykov was one of those who made an invaluable contribution to helping the brotherly people of Abkhazia during the Patriotic War of the Abkhaz Nation 1992-1993.

A prominent statesman and political figure, Yuri Kalmykov was born on January 1, 1934 in the village of Abazakt, located about 20 kilometers from Cherkessk. According to official documents, Cherkessk itself is listed as the place of his birth - in those years still Batalpashinsk (the name of Cherkessk until 1934 – ed.). Yuri's parents were school teachers. His mother died of hypertension when the boy was only 13 years old.

Yuri was more inclined towards the humanitarian than to the exact sciences. At the age of fifteen, he entered the Circassian Regional Secondary Medical School, where he acquired the profession of medical assistant. 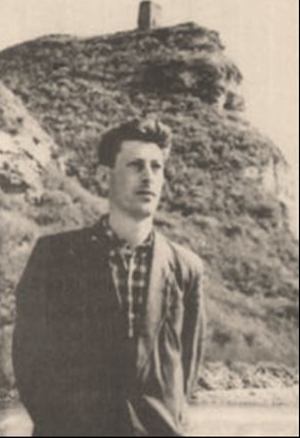 Lawyer and teacher: “I wasn’t drilling, but preparing a shift for myself”

At the age of eighteen, Kalmykov became a law student at the Kalinin Leningrad Law Institute, and from 1957, he studied law at the Zhdanov Leningrad State University. After graduating from this university, the young man continued his career as a lawyer as a graduate student at the Saratov Law Institute, where he remained to teach. For a long time Kalmykov has connected his professional activity with the city of Saratov. It was there where he formed as a lawyer and, in particular, as one of the most famous civil law specialists at that time in Russia. Yury Kalmykov is considered the founder of the Saratov school of civil law (civil law science - ed.).

At the Saratov Law Institute, he gained fame as a legendary teacher.

This is how the author of the article Adam Dymov “Yuri Kalmykov. Right of Justice” writes: “Kalmykov’s courses and research in civil law were appreciated by the entire legal community in the country. In addition, the teacher Kalmykov was loved and respected: scientists as a colleague, and students - as a kind and wise mentor. According to the recollections of Yuri Kalmykov’s students, everyone wanted to pass exams at him. Then the test of knowledge turned into a conversation of like-minded people. The teacher did not quibble, did not seek to “drown”: from a “floating” student, he literally pulled out familiar topics. The teacher did not drill, but prepared himself a shift. ” 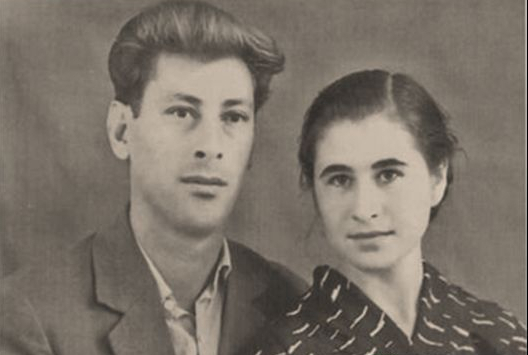 New Challenge: the way of a politician

Deeply interested in the science of law, Kalmykov the scientist achieved great success in the professional field when he became a candidate at 34, and a doctor of science at 37. However, fate prepared for him much more than advances in science, teaching, and jurisprudence: his political and state activities began. 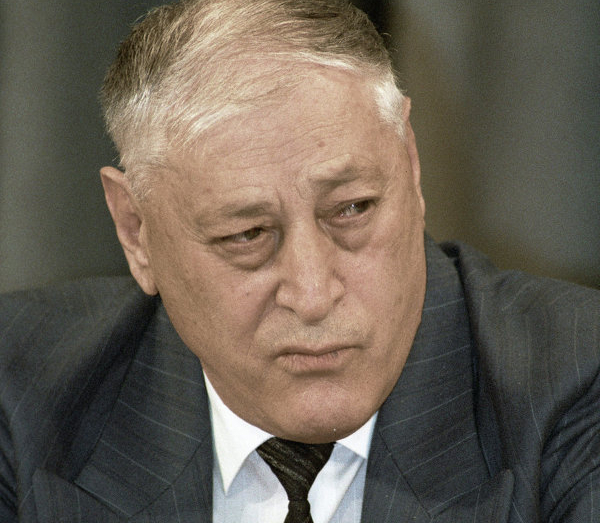 In March 1989, Yury Kalmykov was elected people's deputy of the USSR. Being a member of the USSR Supreme Council, as a professional lawyer, he was closely involved in the improvement of the country's legislation. His outstanding professional qualities were in demand in Moscow after the collapse of the USSR. In 1993, Kalmykov was offered to take the chair of the Minister of Justice of the Russian Federation, and Yury Khamzatovich agreed. His main achievement in this post was the development of the Civil Code of the country. He participated in the creation of the Constitution of the Russian Federation. Yuri Kalmykov resigned from his post in 1994 due to a acute disagreement with Yeltsin’s decision (Boris Yeltsin - the first president of the Russian Federation - ed.) on the beginning of the war in Chechnya (December 1994 - ed.). 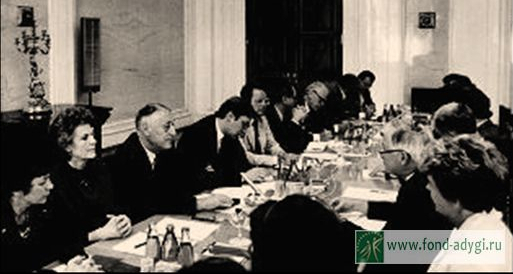 Meeting with the delegation of the Swedish Riksdag in the Committee on Legislation of the Supreme Soviet of the USSR
© fond-adygi.ru 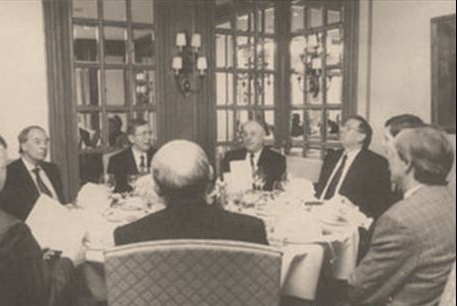 Of course, the fame of his fellow countryman, Yuri Kalmykov, was well known in Karachay-Cherkessia. He was proud of and cited as an example. In addition, he - although had not lived in his homeland since his youthful years - never forgot his roots and did not separate himself from his native people.

Yury Khamzatovich noted in his book “Twists of Fate”: having been born in the Caucasus, he lived there a little, although he knew the language and customs, but even those few years turned out to be sufficient for him to form a national self-consciousness.

“Some two or three years spent in the village left the foundation on which the germs of national self-consciousness quickly broke through, a special interest appeared in the fate of his own people. Bagrat Shinkuba is right when he says that childhood is “the root of the human soul, it grows in us by character and destiny,” wrote Kalmykov.

The affairs of the Caucasus have become an integral part of his destiny, his thoughts. Therefore, it is not surprising that in 1991 he headed the International Circassian Association (ICA), and in 1992 he became chairman of the Congress of the Kabardian people. 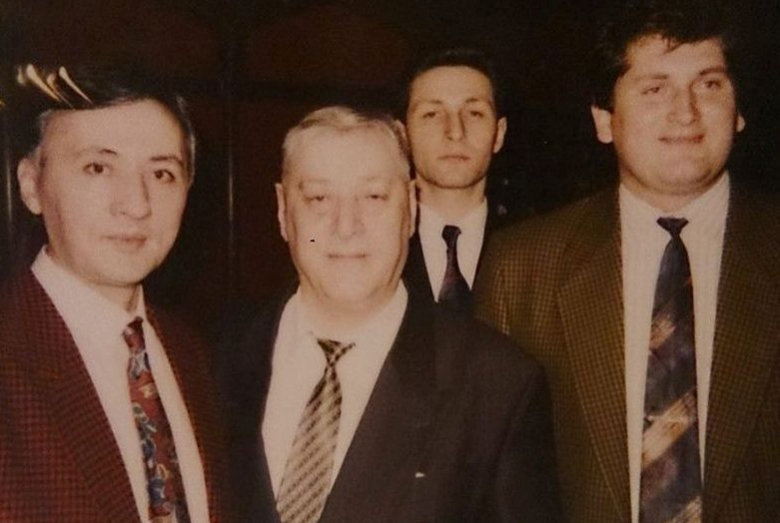 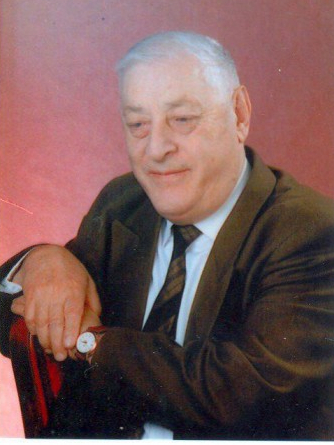 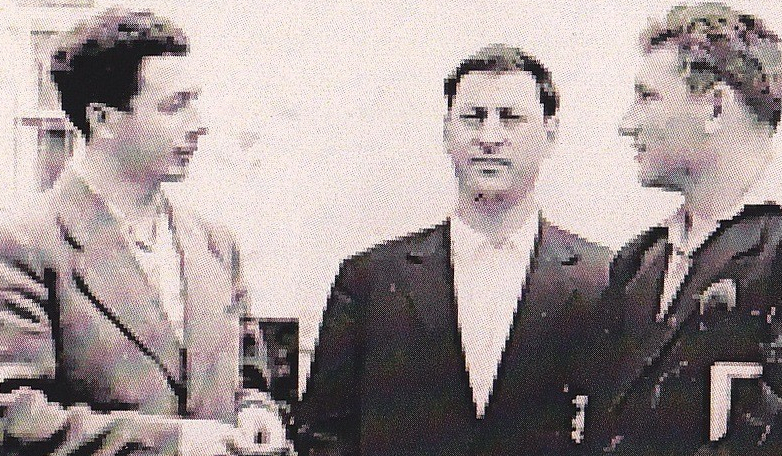 For the sake of the Caucasus and for Abkhazia

It was these two organizations and Yuri Kalmykov personally who played a huge role in the support that the fraternal North Caucasian peoples rendered to Abkhazia during the 1992-1993 Patriotic War (PWPA).

“Upon learning of the start of hostilities in Abkhazia, I immediately phoned Nalchik and dictated on behalf of the ICA Executive Committee a call for all Adygs (Circassians) to help Abkhazia. Then I myself flew to Kabardino-Balkaria, where there was already an enrollment of volunteers,” recalled Kalmykov in the same book “Twists of Fate”. 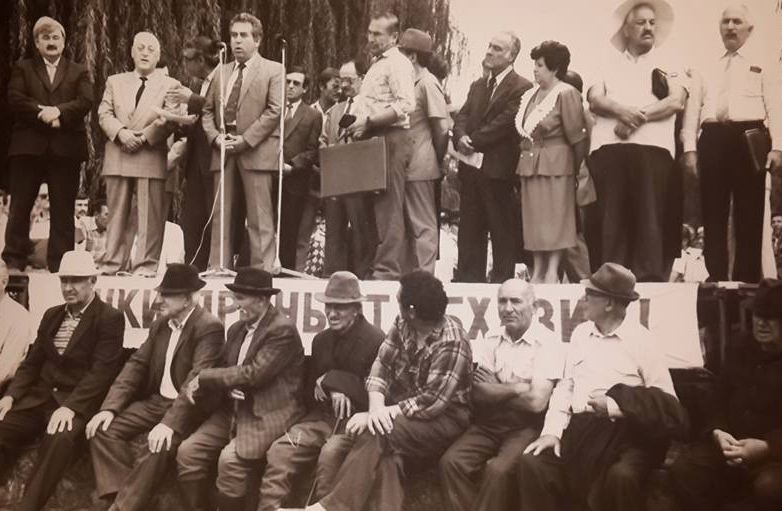 Yury Kalmykov at a rally in support of Abkhazia on the Abkhaz square in the city of Nalchik, Kabardino-Balkaria, 1992
© fond-adygi.ru 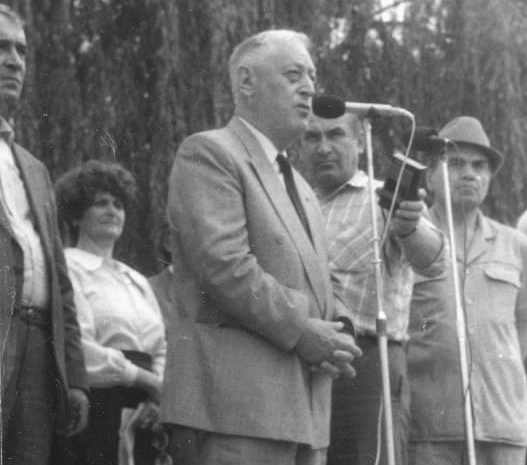 Yury Kalmykov at a rally in support of Abkhazia on the Abkhaz square in the city of Nalchik, Kabardino-Balkaria, 1992
© fond-adygi.ru

This assistance of Yury Khamzatovich was highly appreciated by the first president of Abkhazia, Vladislav Ardinzba, who considered Kalmykov a great friend, “a man of rare soul and rare talent”.

This is how Ardzinba spoke about Yuri Kalmykov: “In the most difficult time <...> he was one of the first to raise a voice in defense of our people, being the chairman of the Congress of the Kabardian people. It is well known how much persecution he suffered for it.” 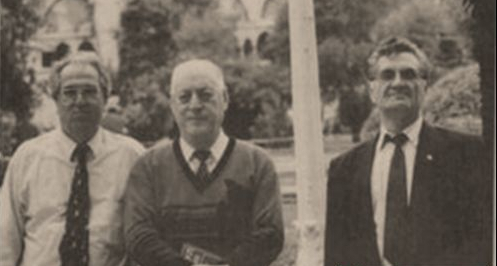 Kalmykov spoke loudly and openly about what was happening in Abkhazia even in the USA, in the city of Atlanta - at the 1993 international conference devoted to the situation in the North Caucasus where he was invited by the Carter Center (conference was organized by Carter Center, a non-profit non-governmental organization, founded in 1982 by former US President Jimmy Carter -ed.). 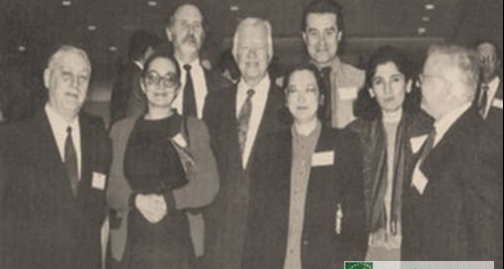 Political analyst and statesman Natella Akaba, who was also present there, recalled this in an interview with Abkhaz television: “Yuri Khamzatovich looked amazingly convincing and solid. The interest that the Americans and other conference participants showed to him, of course, was related to the fact that he was at that time the Minister of Justice [RF], but (besides - ed.) also to the fact that he was an outstanding person. Surprisingly wise, honest and principled person. Yury Khamzatovich very convincingly and openly spoke about the problem of Abkhazia, about the tragedy associated with the collapse of the Soviet Union and the unsettledness of many relations. I think it was of great importance for Abkhazia that he spoke there.”

Secretary of the Security Council of Abkhazia, Mohammed Kilba also speaks about the extraordinary contribution of Yuri Kalmykov in support of the Abkhaz people during the PWPA.

“The name of Yury Khamzatovich Kalmykov in the Adyg-Abkhaz, Circassian world is the most famous and one of the most respected, he notes. - It was Yuri Kalmykov and the chairman of the Moscow “Adyga Khase” (“Circassian organization” - ed.) Boris Agbashev raised our entire Adyg-Abkhaz Circassian diaspora during the war, and it was from there that the first serious financial aid came to us. I even know that during the war they arrived by boat from Adler to Gudauta and brought with them considerable financial assistance. I didn’t meet them, but Vladislav Grigorievich spoke about this (Ardzinba).”

Personally, Mohammed Kilba met Yuri Kalmykov after the war, in the city of Cherkessk. Kilba repeatedly witnessed Kalmykov’s meetings with the top leadership of Abkhazia during his several visits to Sukhum.

The Secretary of the Security Council of Abkhazia especially recalls the warm, friendly relations between Vladislav Grigorievich and Yury Khamzatovich. The meeting of three “great sons of the Caucasus”, Bagrat Shinkuba, Vladislav Ardzinba and Yury Kalmykov, especially slammed into his memory.

“Of course, after the official meetings, there was a traditional Abkhaz feast, Kilba says, and I remember one of these feasts. I remember that Gennady Leonidovich Gagulia was the tamada, and Vladislav G. Ardzinba, Bagrat Vasilyevich Shinkuba and Yury Khamzatovich Kalmykov set the tone for everything. I was amazed how they, such great and serious people, knew how to rejoice like little children. It was a moment of deep communication, deepest respect and brotherly relationship to each other. They remembered so many interesting things and had so much fun! And there was so much joy around them at the table! ” 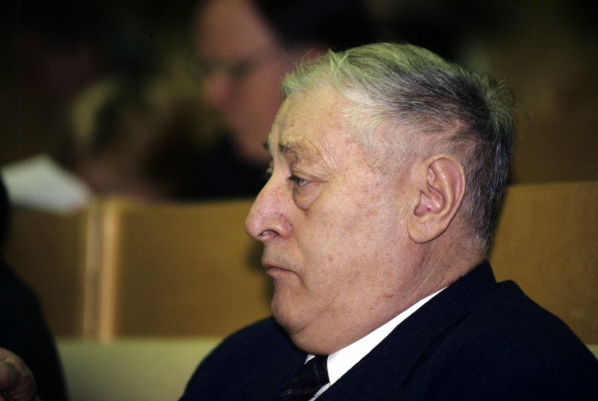 «Like all the great ones, he knew how to foresee»

It happened so that Mohammed Kilba became one of those who found himself next to Kalmykov immediately after his death. In January 1997, Yury Khamzatovich flew to Mineralnye Vody airport, intending to travel further to Cherkessk for a meeting of the ICA Executive Committee. Kilba was already in Cherkessk: he received news that Kalmykov became ill and later died in the arrival hall of the airport. “Having learned that he is in the morgue of Minvody, we, of course, immediately went in a large column of cars there. I remember that it was a day off, and it was not easy to take him from there, certain documents were required, but everything was settled, and I was among those who carried the body of Yuri Khamzatovich from that ill-fated morgue,” recalled Mohammed Kilba.

A lot of people gathered at the funeral of Kalmykov in Cherkessk, they carried the coffin through the whole city up to the turn in his native Abazakt, where he was buried with honors.

“I was surprised to find out later from the wife of Yuri Khamzatovich, Oktyabrina Kalmykova, that shortly before his death he (Kalmykov - ed.) personally drew a sketch of his future grave. Yet he was a great man, and, as great ones, he knew how to foresee everything,” notes Kilba.

In May 2008, a monument was erected to Yuri Kalmykov in Cherkessk. In Sukhum there is a street named after him. This anniversary for Yury Khamzatovich year (in 2019, Yury Kalmykov would have turned 85 - ed.), a number of events are planned in the Republic of Abkhazia in memory of the great friend of Abkhazia and the great son of the Caucasus. 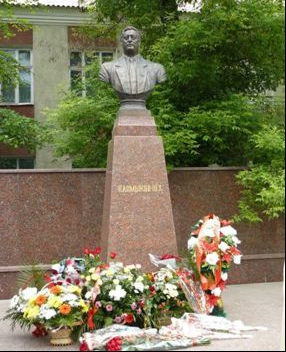 Sources used in the material:

Patriotic War of the People of Abkhazia (PWPA) Personalities Yuri Kalmykov
To leave a comment you need
to login or register.
Share
No comments