Actor “without a mask”: the story of life and work of Nurbey Kamkia

The famous Abkhaz actor of theater and cinema, the people's artist of the Georgian SSR, the Abkhaz ASSR and the North Ossetian ASSR Nurbey Kamkia would have turned 85 on June 15. The essay of the WAC web information portal is on what he was like on stage and in life.

The life stories of artists are often akin to a “multifaceted” portrait of one person, if one could imagine such a thing.  The fact is that with each new role, the actor runs the risk of moving away from his real self, and to save himself present, trying on every time new “masks” - mastery is more complicated than acting.  This is referred to as a serious problem by many professionals.  And the more valuable is the property of the actor to always be himself.  This quality, in the opinion of colleagues and relatives of Nurbey Kamkia, has always distinguished him. 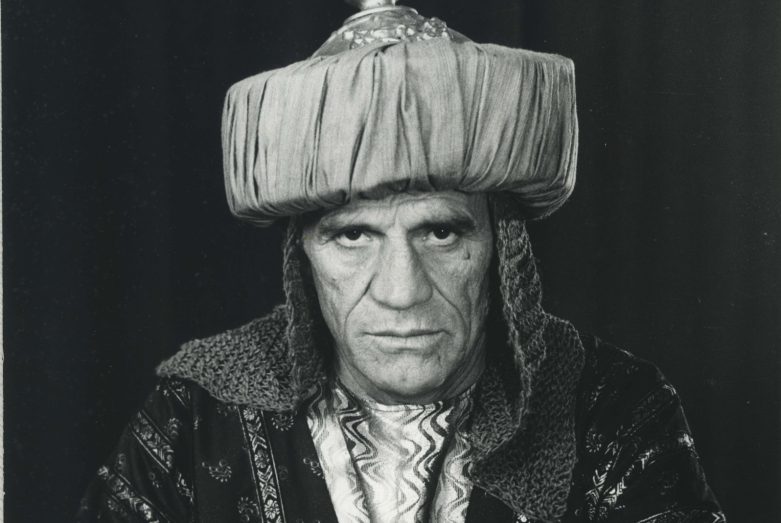 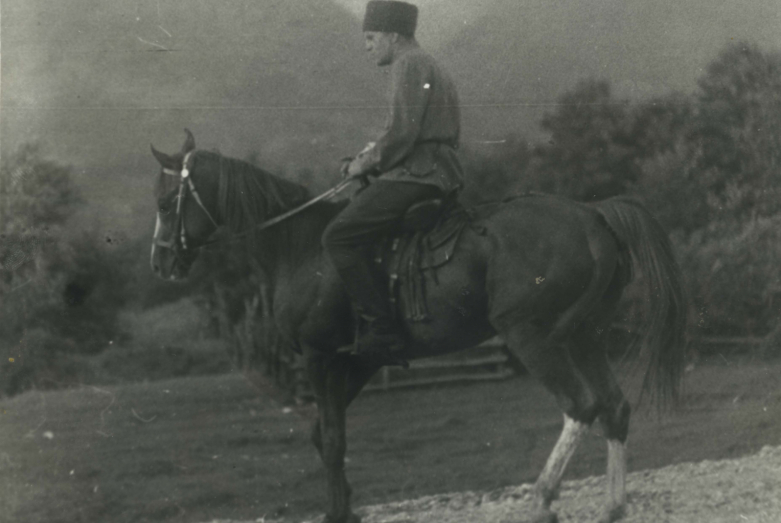 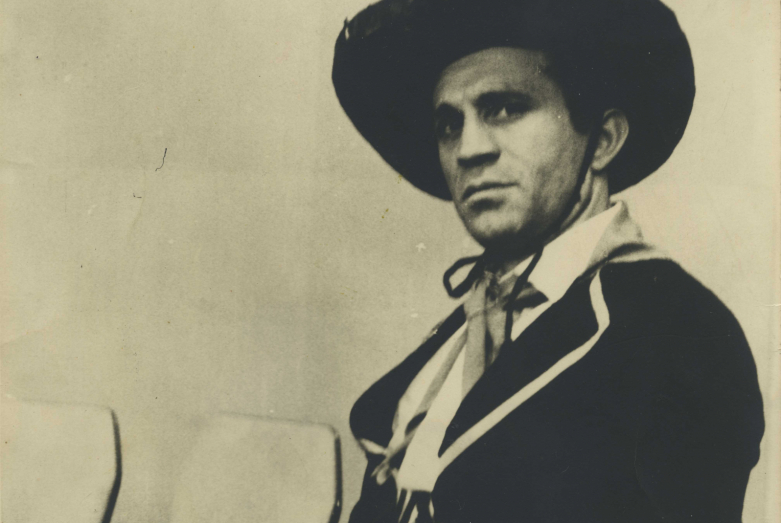 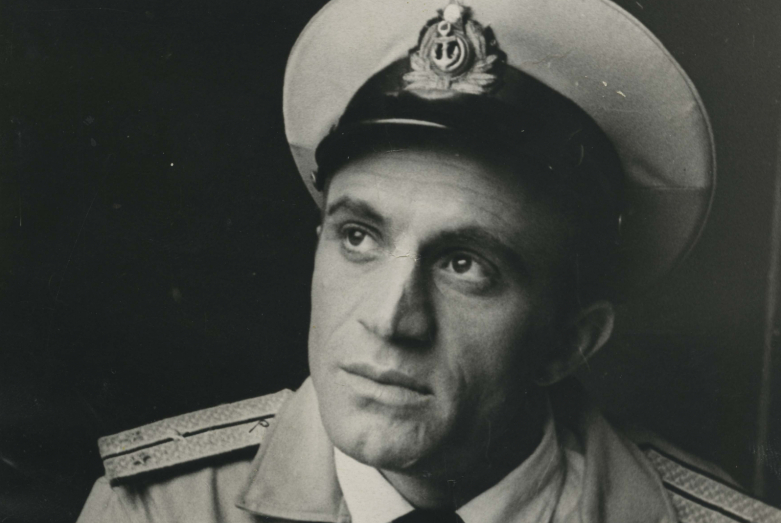 Theater and film actor Nurbey Kamkia played almost until his death.  Just a year before his death, he played in several episodes of the Russian film “Eighth of August”, directed by Jahongir Fayziev. The famous Abkhaz actor died in 2013, he was 79 years old.  His health deteriorated dramatically. Despite Nurbey’s advanced age, his departure came as a surprise to all who knew him.

Nurbey Kamkia was remembered by the audience for his bright film roles.  He starred in Vladimir Saveliev's cult film “The White Hood”, written by Bagrat Shinkuba himself as a screenwriter.  In this 1975 film, Nurbey got one of the key roles. 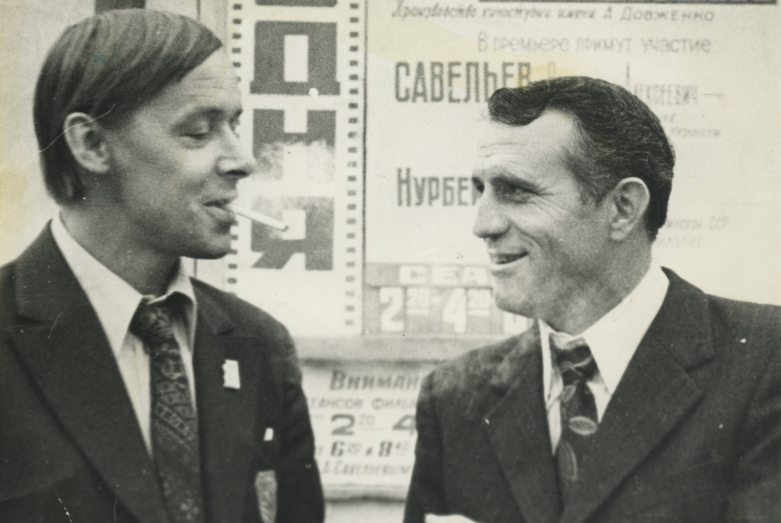 Nurbey Kamkia and director of the film “The White Hood” Vladimir Solovyov at the premiere, Moscow, 1974
© From the Kamkia Family Archive

He also played in the films “The Time of Happy Finds”, “The Life and Amazing Adventures of Robinson Crusoe”, “The Chegem Detective”, “The Feasts of Belshazzar, or a Night with Stalin” and many others.  In total, he starred in 22 motion pictures.

In addition to cinema, Nurbey Kamkia was the leading actor of the Abkhaz Drama Theater.  His ability to get into characters is used as an example by directors to this day for young artists.

The creative journey of Nurbey Kamkia began at the Shota Rustaveli Theater Institute in Tbilisi. His colleague, People’s Artist of Abkhazia Violetta Maan, who was graduating from the same university, recalls that even then Nurbey had “his own little glory” among university students. Over the years of his studentship, he proved himself in training productions, and the teachers set him up as an example of being efficient and hardworking.  Violetta and Nurbey were both among the students from Abkhazia, and, of course, knew each other, but got to know each other more closely later. 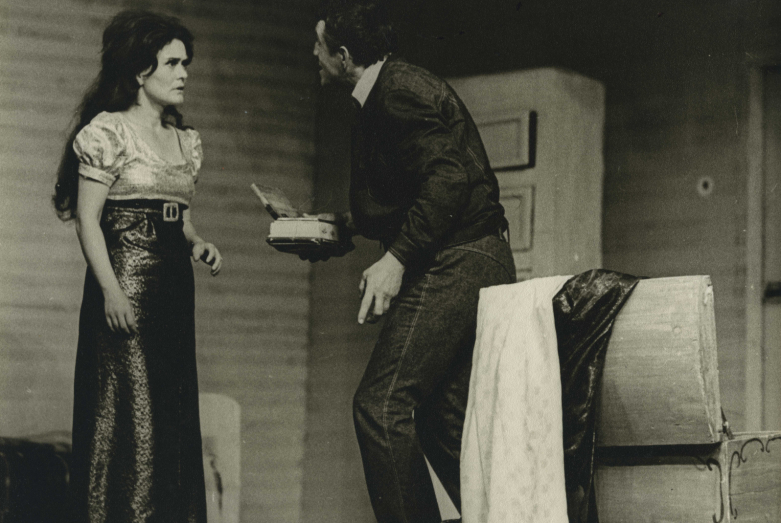 The performance “A Streetcar Named Desire” based on a play by Tennessee Williams directed by Dmitry Kortava.  In the photo: Nurbey Kamkia and Violetta Maan, 1972
© From the Kamkia Family Archive

Years later, Violetta Maan, after studying at the institute, returned to her homeland and began working in the Abkhaz Drama Theater, where Nurbey had already played.

“He was a very gentle and calm person.  He liked to joke.  Always found an approach to people. He was natural, he had some kind of attractive, courageous simplicity,” Maan recalls.

According to the actress, while still a student, Nurbey showed inquisitiveness and perseverance, lingered after rehearsals, spent a long time alone with himself, living into another role.

“He was involved in almost all the performances of the Abkhaz Drama Theater.  Surprisingly, to a greater extent he tried on negative roles and found something positive in them, little by little, during the performance, making the entire auditorium fall in love with his negative hero,” Violetta Maan smiles.

Violetta and Nurbey played together in Mitya Kortava’s play “White Flags”.  This is a story about the life of prisoners, one of which was played by Nurbey.  Violetta played the nurse, who occasionally looked into the cell to the prisoners. “And in one of these parishes, Nurbey abruptly and unexpectedly seizes me and puts me on a chair.  I am small, thin, trembling with fear.  He stares at me [intently] for a while, and the viewer expects something terrible.  But the hero of Nurbey, to the surprise of everyone, begins to read poetry, little by little, thus making my heroine falling in love with my hi,, and through her the whole auditorium,” says Maan. 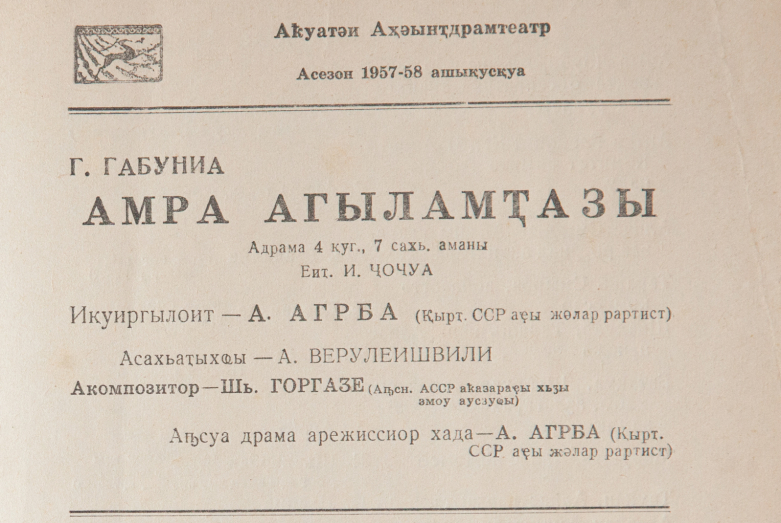 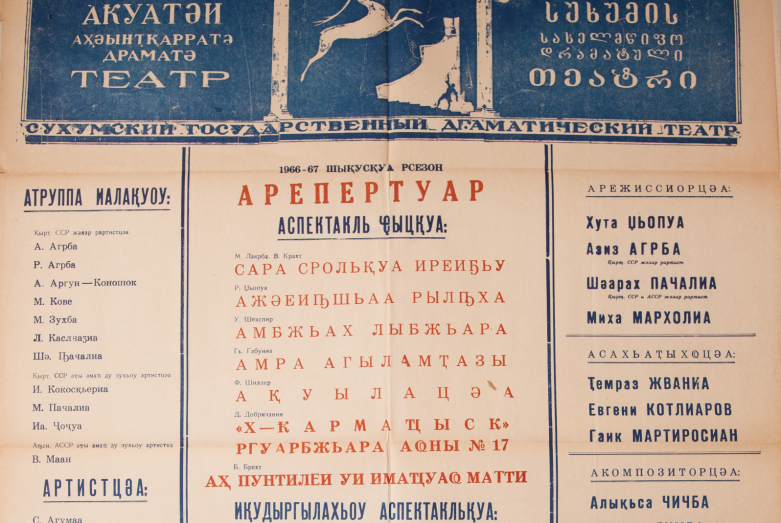 Special popularity came to Nurbey Kamkia after he played the main role of Kent in the play “King Lear” by William Shakespeare.  That was in 1983.  According to Maan, it was the first and only performance in the history of the Abkhaz Drama Theater, when people were standing at the entrance to the theater and begging for tickets.  “Spectators didn’t spoil us much then,” she explained.

Two years before this triumph was “Othello”.  Again Shakespeare, again the main role and again a smashing success. “There were two parts to this performance.  In one of the main roles we played with Nurbey, in the other - Leo Caslandzia and Anna Argun.  I remember how on the day of the premiere Leo and Anna came with huge bouquets of flowers and handed them to Nurbey and me.  That was the attitude.  The atmosphere was extraordinary,” Maan smiles.

Recalling the rehearsals of this performance, Maan says that Nurbey was an “incredible partner.”

“I was a “little coward” and I was always very nervous before going on stage.  He knew how to support and calm down,” says the actress. 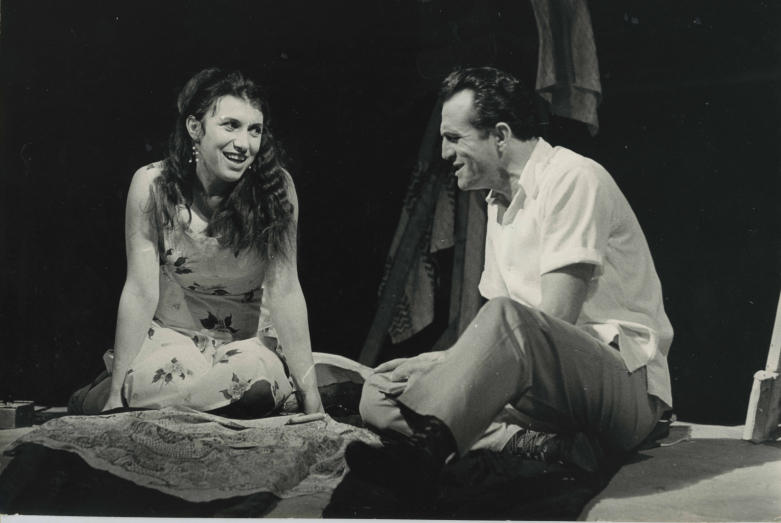 The performance “Duel” based on the play by Mara Baijiev staged by Mikhail Markholia.  In the photo: Sofa Agumaa and Nurbey Kamikaze
© From the Kamkia Family Archive The performance “A Streetcar Named Desire” based on a play by Tennessee Williams directed by Dmitry Kortav.  In the photo: Nurbey Kamkia and Sofa Agumaa, 1972
© From the Kamkia Family Archive Tragedy not on stage

In the life of Nurbey Kamkia there was a real tragedy - unlike all the theater plays he played. During the Patriotic War of the people of Abkhazia, his eldest son Aslanbey Kamkia died.  He was awarded the title Hero of Abkhazia.

Aslanbey followed the path of his father, successfully graduated from the All-Union State Order of the Red Banner of Labor, the Institute of Cinematography named after S. A. Gerasimov and studied for the director.  After high school, he served in the Soviet army, in cavalry in the Moscow region.  Then he returned to his homeland, began working on Abkhaz television and simultaneously with the Abkhaz filmmaker Vyacheslav Ablotia shot the film.  But the war interrupted the activities of a young promising director.  And then cut off his life ...

This tragedy has forever changed the whole family.  After the death of her son, the wife of Nurbey, Zinaida Lagvilava, an honored teacher of Abkhazia, was very upset, left her job, and then fell ill and died in 2005. 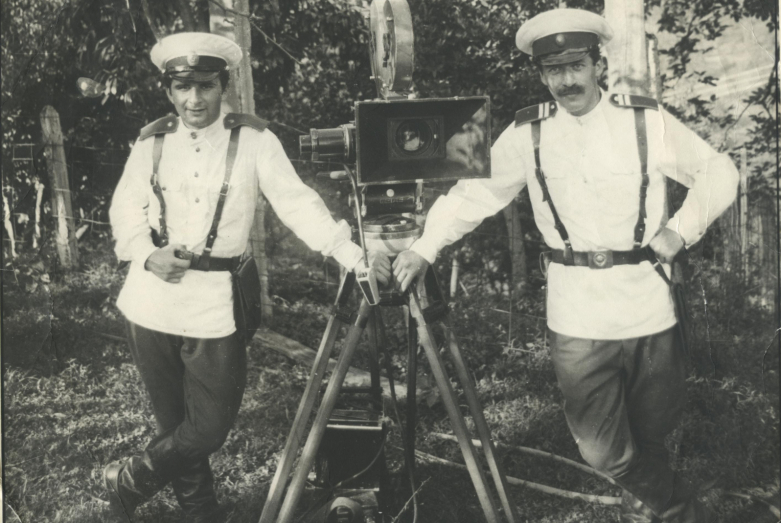 Aslan Kamkia on the set, 1980s
© From the Kamkia Family Archive Scene from the film “Velvet Season” by director Vladimir Pavlovich, Aslan Kamkia launches a boat at sea, on the left is Esma Dzheniya in dark blouse, 1978, Sukhum
© From the Kamkia Family Archive Aslan Kamkia and Pshizabi Misostishkhov at the shooting of the film “The Bell of the Sacred Forge” directed by Mark Kovalev, 1982
© From the Kamkia Family Archive

The bride-in-law Fatima Kharchilava recalls that the father-in-law was always a very warm and sympathetic person.  Fatima was 22 years old when she came to the house of Nurbey Kamkia.

“He accepted me as his own daughter.  I talked with him from the first days of my marriage (according to Abkhaz traditions, the young daughter-in-law has no right to talk with her father-in-law until he performs a special ceremony, there are many examples when the father-in-law and the daughter-in-law did not talk throughout their lives - ed.).  He never offended, even with his eyes.  Maybe he didn’t like something, but he didn’t show it,” recalls Fatima. Nurbey Kamkia as Philip II in the play “Don Carlos” based on the play by Friedrich Schiller staged by Nelly Eshba, 1970
© From the Kamkia Family Archive According to her, the father-in-law often told different stories, told about his family and parents. He often took his grandchildren to the village and spent a lot of time with them. The senior grandson of Nurbey Aslanbey, who was named after his uncle, graduated from school this year and has already successfully passed all the final exams.  Aslan wants to study in St. Petersburg and become a civil engineer.

“I remember my grandfather well.  When he died, I was 14 years old.  We often walked together with him, he told different life stories.  Often drove my sister and me to the village. He was always interested in my progress at school,” recalls Aslan. 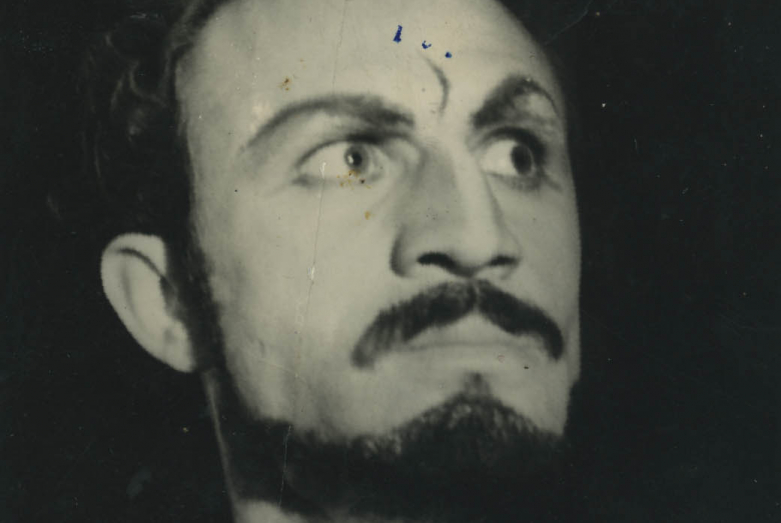 Nurbey Kamkia as Aslanbey in the play “Before Dawn” based on a play by Andrey Lagvilava, 1960
© From the Kamkia Family Archive

The granddaughter of Nurbey Saria is in the ninth grade.  Even in childhood, my grandfather said that “now she will definitely become an actress,” because Saria was brisk and sociable.  The girl herself has not yet decided with the choice of profession, but there was a time when she seriously thought about following in the footsteps of her uncle, whom she had never seen, and becoming a director.

“We loved the grandfather very much.  I watched a lot of his films, some of them several times.  I am proud that I am his granddaughter,” says Saria.

The life of Nurbey Kamkia, in which there were triumphs and daily work, moments of happiness and terrible tragedies, was always full and always filled with meaning.  Until the last days he remained a sought-after actor - and a living person. He was himself. Scene from the play “March 4” based on the play by Shalodia Ajinjal, director Georgy Kavtaradze.  In the photo: Nurbey Kamkia, 1991
© From the Kamkia Family Archive