“I have never seen tears and sobs over a book”: to the 115th anniversary of Iua Kogonia

Iua Kogonia lived a very short life, died young, but his star was one of the brightest in the constellation of Abkhaz poets. On the 115th anniversary of the national poet, the WAC web information portal prepared an essay about him.

The Abkhaz poet Iua Abasovich Kogonia was born on March 13, 1904 in the village of Kutol, which was then part of the so-called Kodor County, in a peasant family. His father Abas was a rider famous throughout Abkhazia. He is even mentioned in the novel “Kamachich” by Dmitry Gulia, where one of the heroes congratulates his neighbor on the birth of his son and exclaims: “May he be as fearless a hero as Inapha Kägua, and as unsurpassed rider as Abas Kogonia”. 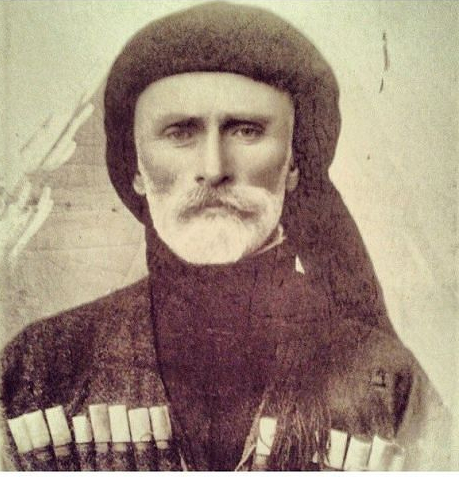 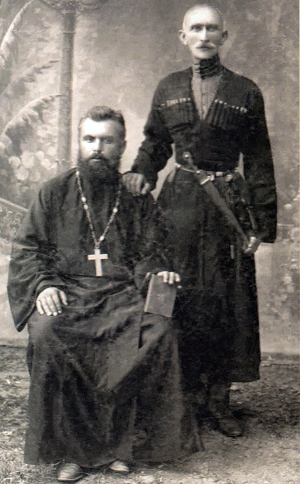 Priest of the church of St. George in the village of Kutol, Andrey Sajaya, and the uncle of the poet Dadyn Kogonia
© From the book “Iua Kogonia. Works »2015

From childhood, Iua Kogonia was interested in folk tales, he liked folklore - poems, chastooshkas and proverbs, which were created by ordinary people and passed down in oral tales from generation to generation. The house where the future poet grew, was often visited by the famous narrator Chagu Chatsba. It was precisely folklore that became for Iua Kogonia the soil on which all his poetry was later founded.

“The stories and parables of experienced and wise people led little Iua to the wonderful world of tales and legends reflecting the heroic events of national life,” wrote the poet of Abkhazia Mushni Lasuria in a book about Iua Kogonia. 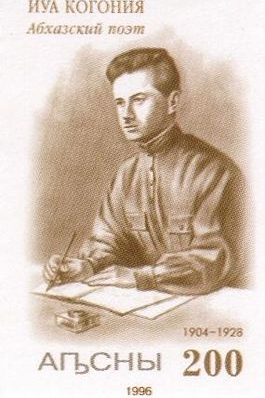 After graduating from Kutol secondary school, sixteen-year-old Iua went to Sukhum, where he began to study at the Teacher's Seminary. Abkhaz language was taught to him by the patriarch of Abkhaz literature Dmitry Gulia himself. It is believed that Iua began to write poems here, while studying at the seminary.

The pioneer in everything and the patriarch of Abkhaz literature: about Dmitry Gulia

Kogonia became an active participant in the literary circle of the seminary “Morning Star”, he also took part in the creation of the manuscript journal of this circle, and later headed it. In the handwritten journal, the works of Iua Kogonia appear alongside those written by other Abkhaz poets and writers who started at that time. Among them are Dmitry Gulia himself, as well as, for example, Dzadz Darsalia and Ivan Papaskir. Later, Iua created and headed the publication of another handwritten journal - “Voice of Youth”.

Iua Kogonia is also considered one of the first Abkhaz journalists. His first article entitled “How useful education is” was published in the eighth edition of the “Apsny” newspaper in 1920. In the same edition appeared his first poem – “Thief”.

In 1925, Iua Kogonia entered the Moscow Institute of Journalism. In a big city, a poor Abkhaz young man lives in rather cramped conditions.

In one of the letters to his relatives, Kogonia writes: “Today is already the fourth day, as I am without means of subsistence. However, it does not matter. My heart does not falter in such cases. Do not worry about me. Somehow, I can get myself a piece of bread, without complicating. Tomorrow I will go to work with my student friends.”

While studying at the institute, Iua Kogonia continued to work as a journalist, wrote various notes, mostly on cultural topics, and sent them to the editor in Sukhum.

The situation of Iua Kogonia in Moscow deteriorated especially when his father Abas Kogonia died in Abkhazia, and the poet's family was left virtually without the main breadwinner. The poet lived in a big city in the poor, endured hunger and cold. Often, Iua Kogonia was forced to skip classes at the institute due to the fact that he had nothing to wear during the cold season: he did not have suitable outer clothing.

“Physically weak and fragile Kogonia could not stand against the harsh winter, damp, penetrating autumn,” writes Lasuria. “Accustomed to free and clean air, he falls ill just before graduation from the institute in 1928. He had pulmonary tuberculosis. ” 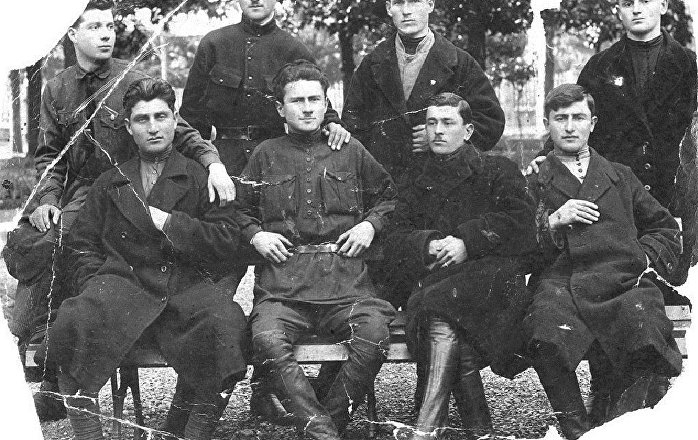 Farewell to the national poet

He could not graduate from the Institute: doctors were powerless in front of his illness. A seriously ill patient, he is being taken home, where he dies on July 14, 1928. He was only 24 years old.

Many people gathered to accompany the young poet on his final journey, writes Lasuria.

The poet Bagrat Shinkuba wrote about his departure in the following way: “Many times I have seen how the Abkhaz lamented near a saddled horse or over personal belongings or the armor of the deceased. However, I never, neither before nor after, have seen tears and sobs over a book.”

The only book that saw the light while the poet was still alive was “Poems. Old stories.” It was published in 1925 in Sukhum. This book was republished in the seventies, also in Sukhum, and was released in Russian in Moscow. Immediately after its release, it made her author, young Iua Kogonia, a national poet whom ordinary people adored and memorized. On the day of his funeral, they said goodbye to the national hero. 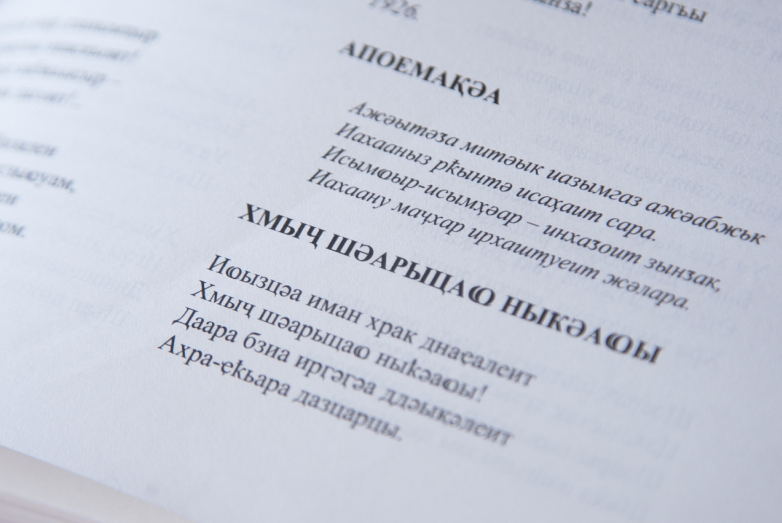 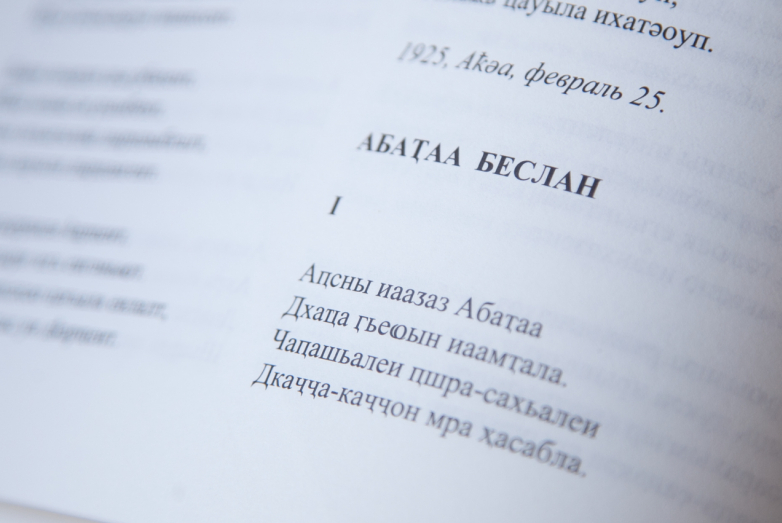 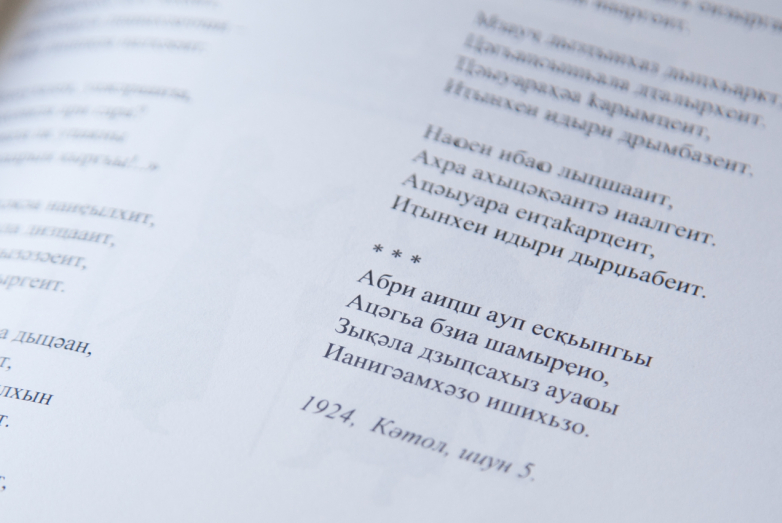 Creator of the Abkhaz poem

“In the poet’s lyrics there is a highly subjective beginning,” writes the scholar Viacheslav Biguaa, “the author’s lyrical “I”, his experiences, and views on contemporary life occupy a significant place in it.”

Literary critics believe that Kogonia is the creator of the poem in Abkhaz literature. Kogonia's poems are written based on folk legends, tales and stories. Their themes are eternal and represent universal human values, among which are love, friendship, loyalty and betrayal. Almost every schoolchild in Abkhazia easily recognizes lines from the textbook poem by Kogonia “Navey and Mzauch”. Here is an excerpt of this poem translated from Abkhaz by Konstantin Lipskerov:

And the heat is hot and the way is long,
difficult road in the mountains.
Navey laid down in the shade of a pine,
To relax a bit.
He slept peacefully, like a child,
Fell asleep without a dream
And in the boughs of the pines, rustling,
The wind blew - providence.
Mzauch, hurrying to accomplish
His intention
Pointed insidious gun
At sleeping Navey.

Other brilliant poems belonging to Kogonia are “Abataa Beslan” and “Khmych the Hunter”. People's poet of Abkhazia Bagrat Shinkuba considered Iua Kogonia one of the most recognized poets in the people. “No one in our literature,” Shinkuba writes, “except for the founder of [literature] Dmitry Iosifovich Gulia himself, did not receive in the people such recognition as Iua Kogonia. Nationwide fame came to him immediately after the first book, which combined the poet's epic works ... The success of the poems of Kogonia, of course, was primarily due to the high talent and skill of their creator, and poems remain unsurpassed examples of national epic creativity.”

The creative legacy of Iua Kogonia is small - a total of eight poems and several dozen poems. It is assumed that a substantial part of what was ever written by the poet has disappeared without a trace. Such a conclusion can be drawn from the fact that in the first book of Kogonia there was information that the second book of the poet was being prepared for publication. Among the lost heritage of Kogonia is all that he wrote when he was a student in Moscow. 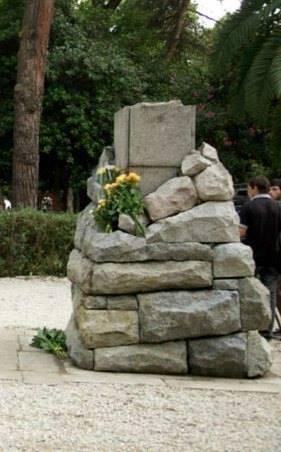 Monument to the poet Iua Kogonia, destroyed during the Patriotic War of the people of Abkhazia, 2014
© Eleonora Kogonia 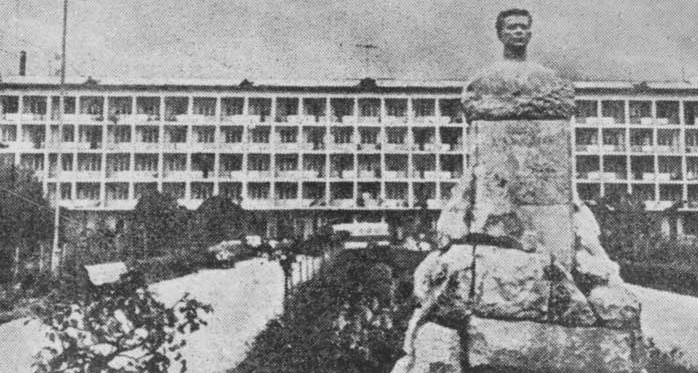 Monument to the poet Iua Kogonia near the Tbilisi Hotel in Sukhum, 1966
© From the book “Sukhumi. Practically tourist guide” of the publishing house “Alashara” in 1966

Iua Kogonia wrote a lot about death, and it was about the death of young people who had not reached their maturity. Unfortunately, his lines turned out to be prophetic for him too:

Time, time, where are you rushing madly -
So seconds fall, often-often
You rush a rider and on foot,
Stealing minutes every hour.
You run yourself unknown paths
Leaving us notches and tagging.
Hold, please, your hastily hours,
Make mercy great - hesitate! 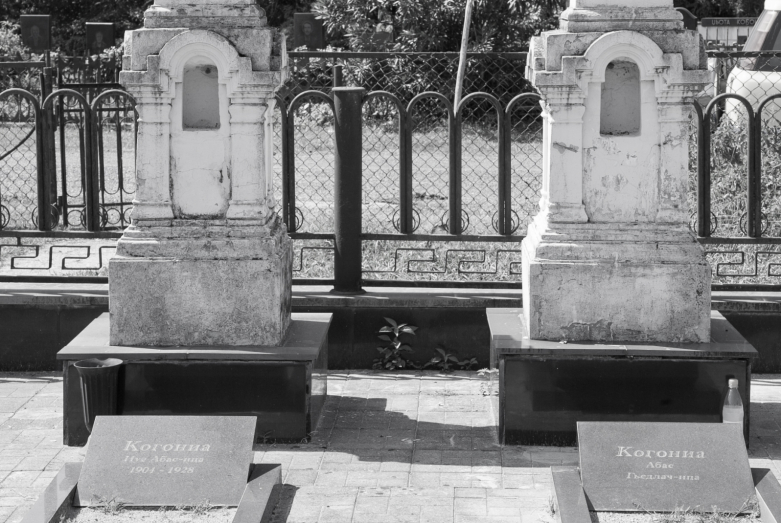 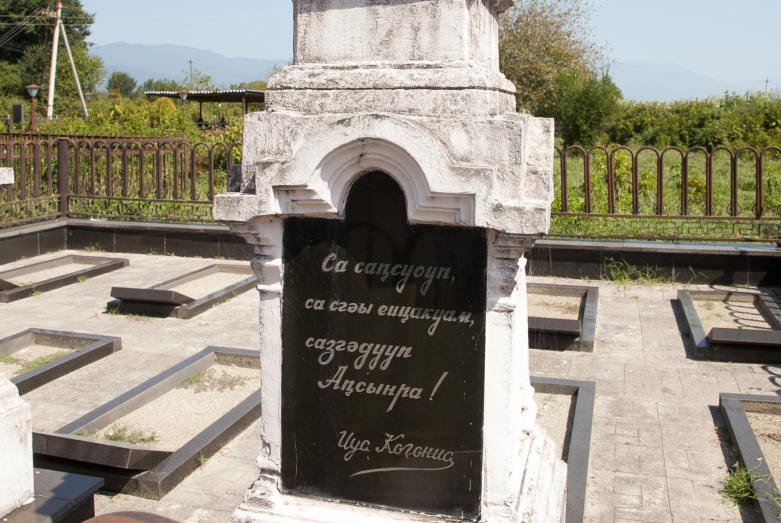