Vladimir Chikatuev, the founder of the legendary "Abazinka" pop group, has devoted more than forty years to the development of the musical culture of his people. On his birthday on December 6, the WAC web information portal recalls episodes of the artist’s biography and creativity.

The legendary pop group "Abazinka" once won the hearts of many admirers: in the 1980s and 1990s, the entire Caucasus knew the musicians. They are remembered today, despite the fact that the band has not been performing for about 20 years. The founder and permanent leader of the legendary ensemble, people's artist and honored art worker of the Karachay-Cherkess Republic Khizir Chikatuev (Vladimir - the stage name of the artist - ed.) devoted more than forty years to the development of the musical culture of his people.

His name is associated with the formation and development of the modern Abaza pop song. His work is a surprising combination of folk traditions and genres of popular music. The musical groups he created are the already mentioned "Abazinka" and the "Abazgi" group — have remained popular for many decades. The most modest boy in the class

Khizir’s maintains, of course, memories of his first appearance on the stage. Classmates were amazed if not shocked: the most modest boy in the class, almost the only one in school who could not keep up with singing due to shyness, in the 8th grade creates a school vocal-instrumental ensemble. 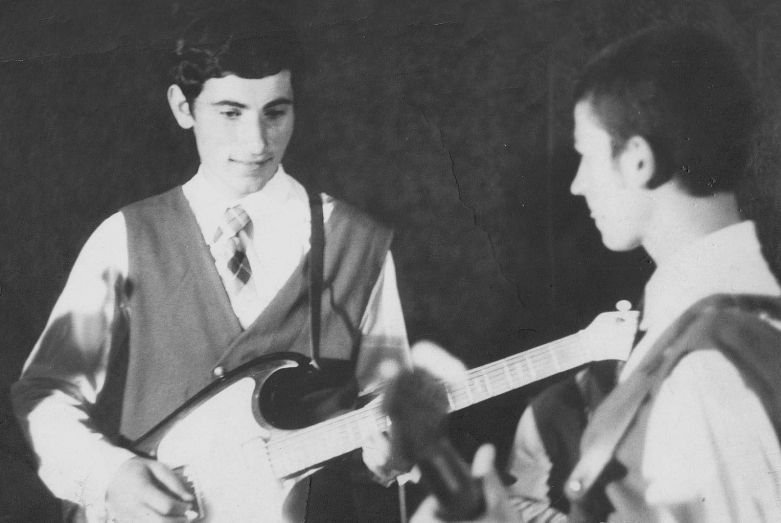 After some time, the pop group called "Abazinka" will begin creative work at the House of Culture of the village of Psyzh (in KChR - ed.) exactly on the basis of this school ensemble. In the meantime, schoolchild Chikatuev simply responded to the call of time.

It was the end of the 60s - the heyday of rock, the peak of the popularity of the "Liverpool Four" The Beatles, the time when young people tried to find and rewrite the precious tracks of bands like Creedence, Animals, The Rolling Stones, which were so hard just to listen. Did an eighth-grader Chikatuyev at the time realize that he was going to have a new stage name Vladimir and his popularity would go far beyond the borders of his native Karachay-Cherkessia?

In 1971, the future artist entered the Cherkess Music School (today the Karachay-Cherkess College of Culture and Arts named after Aslan Daurov - ed.). He studied with great enthusiasm. He mastered playing various musical instruments, in many ways ahead of fellow students, teachers were amazed by the virtuoso performance of complex plays and parties.

He devoted his free time entirely to creativity in the ensemble. Khizir engaged in the selection of repertoire, arrangements, rehearsals. Interestingly, almost all members of the "Abazinka"ensemble, and subsequently the "Abazgi" group, will be destined to go through the same school of music: almost all of them, each in their own time, graduated from the Circassian musical school.

The young man understood that it was necessary to find and develop his own "creative style", relying both on modern rhythms and national color.

Gift to the brotherly people

Success, the artist admits, is when people do not just listen to your songs, but hear and accept them, even if they sound in a different language. He warmly recalls how, in every corner of Karachay-Cherkessia, they were waited for with crowded halls and sincere audience love. The songs sounded not only in Russian and Abaza, but also in the Circassian, Karachay and Abkhaz languages.

Vladimir Ramazanovich is a sociable person and an interesting interlocutor. It was him who remembered many little-known interesting facts from the history of the ensemble. One of these facts is related to fraternal Abkhazia.

In the mid-1970s, a decade of culture and art of Karachay-Cherkessia was held in the capital of Abkhazia. The members of the ensemble decided to sing a song in the Abkhaz as a gift to the brotherly people. The choice fell on the folk song "Azamat". The premiere of the song became a sensation of its kind, the stadium in Sukhum several times called "Abazinka" encore.

Later, Chikatuev’s arrangements for songs by Abkhaz composers and Abkhaz folk songs took a special place in the ensemble’s repertoire. 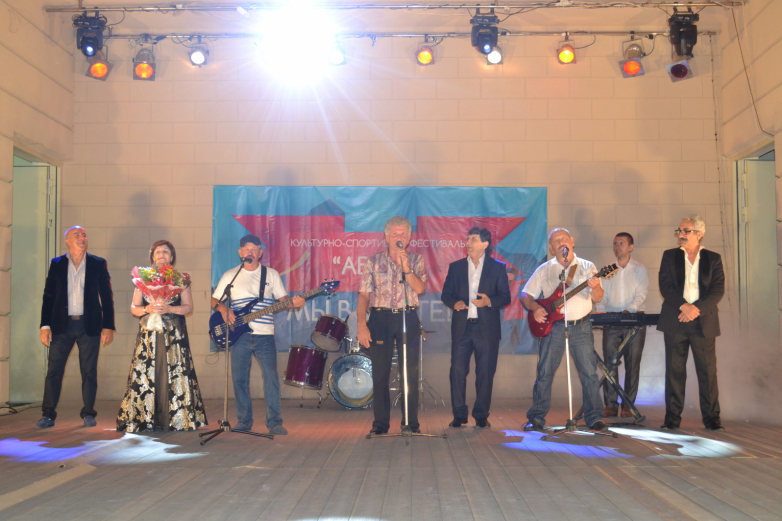 Participants of the ensembles "Apsny-67" and "Abazinka" on the stage of the Cultural and Sports Festival "Abaza". Cherkessk, Karachay-Cherkessia, 2015
© Photo by Bilal Khasarokov 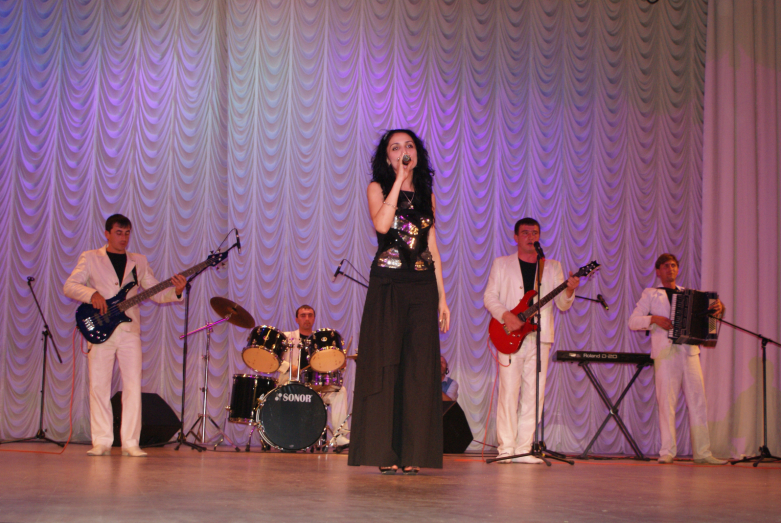 "Abazgi" group on the stage of the Abkhaz State Philharmonic. Sukhum, 2009
© Photo by Bilal Khasarokov

Close cooperation with famous Abkhaz musicians and cultural figures, including Toto Adzhapua, Lyudmila Gumba, Zaur Zukhba, Nodar Sagariya, Nuri Kvarchia, continues today. For a great contribution to the development, propaganda and mutual enrichment of the national cultures of the Caucasian mountain peoples, the "Abazinka" pop group was awarded the title of laureate of the Abkhaz song festival "AKUA-90", and Vladimir Ramazanovich was awarded the honorary title of Honored Artist of the Republic of Abkhazia. 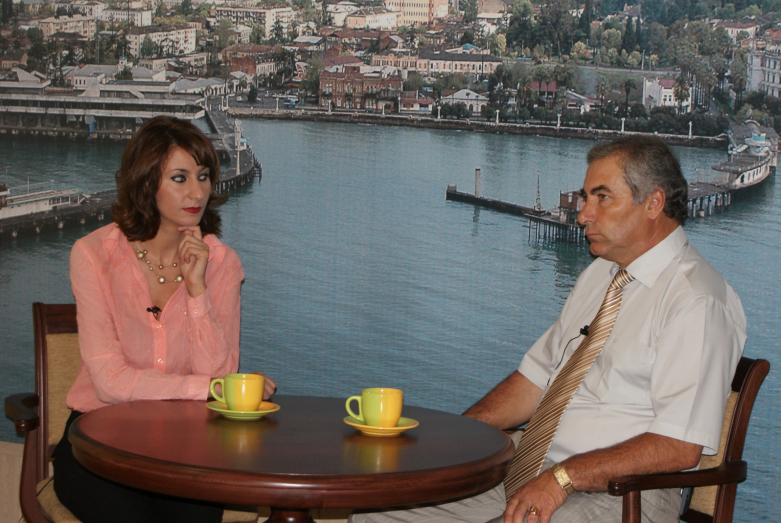 Vladimir Chikatuev in the studio of the Abkhaz State TV and Radio Company. Sukhum, 2009
© Photo by Bilal Khasarokov 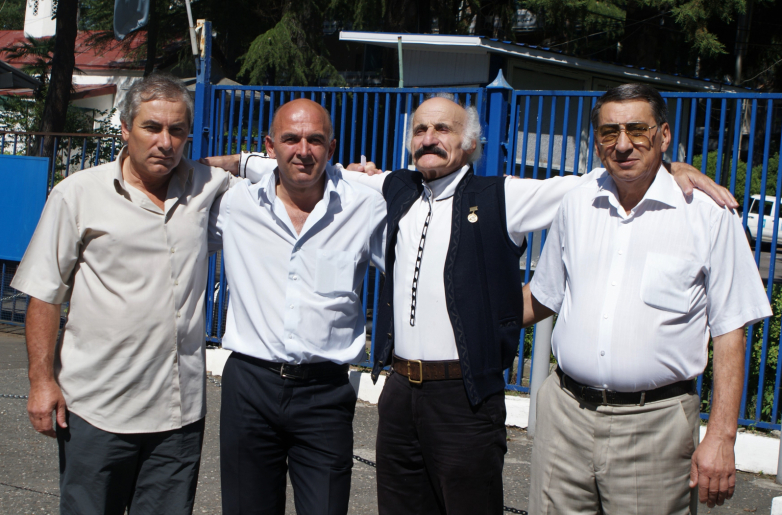 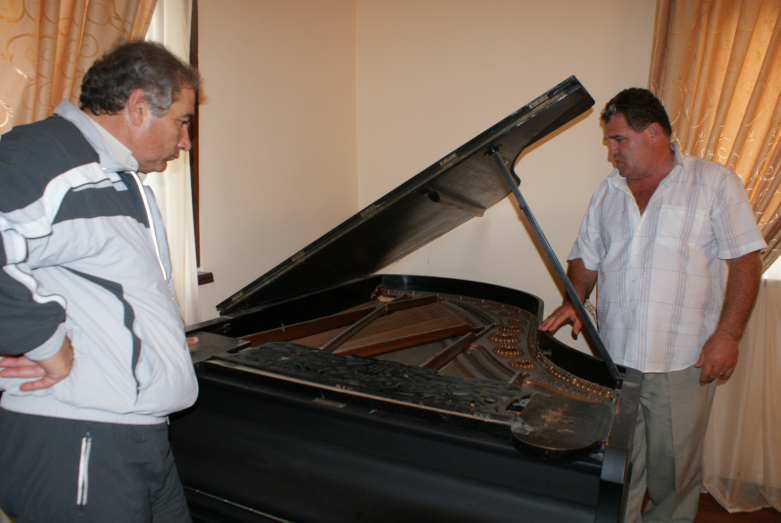 The tour map has been expanding every year. "Abazinka" became the multiple winner of All-Russian and All-Union competitions of folk art. Posters of the ensemble were pasted from Moscow to Abkhazia and the Far East.

In the mid-70s, the ensemble, at the invitation of the management of the radio station "Yunost", took part in an the All-Union thematic radio program, thanks to which national songs in Russian and Abaza languages were broadcasted throughout the Soviet Union and a number of foreign countries. And in the early 80s, an invitation came from Moscow to travel by special agitation train (as part of Soviet propaganda among the then-young people - ed.) to construction sites in Siberia and the Far East with performances. For this activity, the team was awarded numerous certificates and a trip to Hungary.

By the 90s, the ensemble's creativity reached its peak, and an invitation was received to perform with concerts abroad. And then - in 1992, the ensemble was almost ready to leave for Turkey ... But the Patriotic War began in Abkhazia, and the musicians, without hesitation, directed all forces to assist the brotherly people in the struggle for independence and freedom of Apsny. 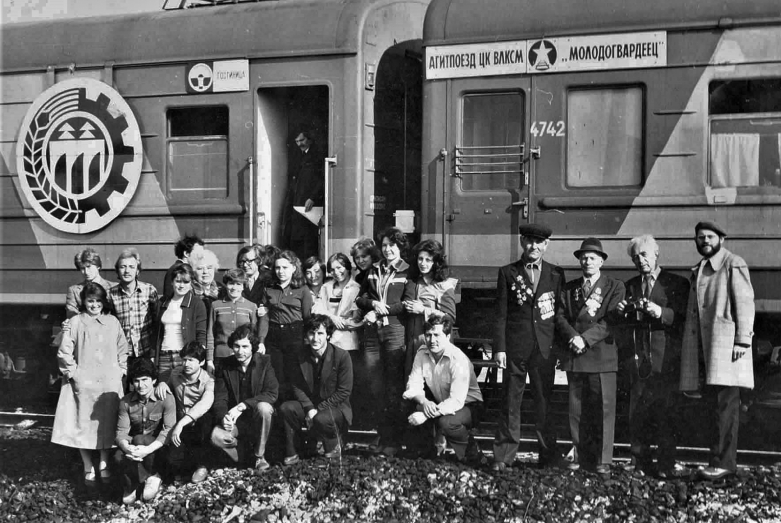 Agitation train of the VLKSM Central Committee "Molodogvardeets". Musicians of the "Abazinka" ensemble with a group of participants in the agitation train and builders, 1983
© From the personal archive of Vladimir Chikatuev

In March 1997, along with the adult collective, the "Abazgi" children's satellite group appeared on the scene.

"The time was difficult, explains Vladimir Ramazanovich. - Adults had problems, to solve which they had for some time to move away from creativity and look for other sources of income. Then I returned to my old idea of creating a children's group.

The "Abazgi" group has become a folk group and today occupies a worthy place in the multicolored world of popular music of Karachay-Cherkessia, while retaining its originality. Fans from many regions of the South of Russia, Moscow and Abkhazia admire its creativity. Three studio albums and a number of individual tracks were recorded.

Great interest was shown in the work of the group by the representatives of the World Arty Committee in the Caucasus. In May 2010, at the invitation of the representative office of the committee, the soloist of the "Abazgi" group Alina Chikatuyeva took part in the International Competition of Young Singers "Golden Voice of BO-NA-MI", which was held in Antalya (Turkey) and won the Grand Prix of the competition. In 2011, Alina was awarded the honorary title of Honored Artist of the Karachay-Cherkess Republic.

Young musicians successfully perform with concerts at the sites of many regional and All-Russian competitions and festivals and continue to record new songs in the studio. Radio and TV shows broadcast programs about their creative achievements. 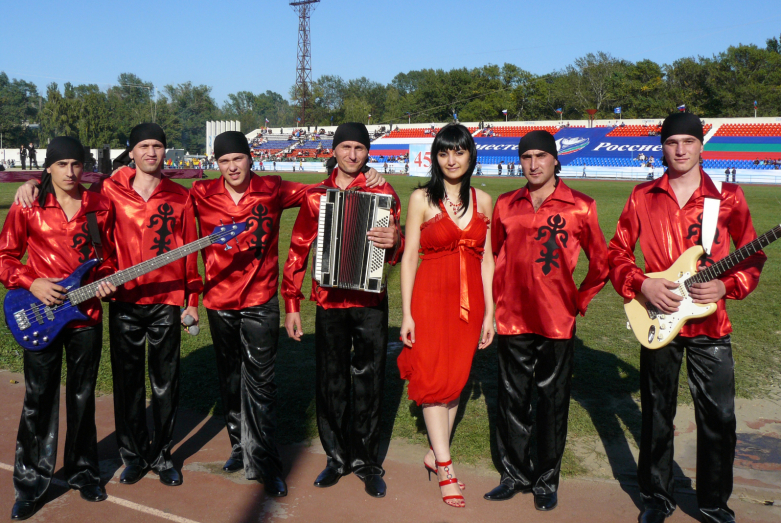 Gift from above - for the benefit of the people

Surprisingly, the shy and modest Chikatuev had the reputation of being strict, demanding and made of "iron" among his colleagues as regards discipline and order in the team. So, to this day, he does not recognize the phonogram, and the "Abazgi" group inspires a careful attitude to creativity, to art, to the viewer, to life.

Of course, an essay about the work of a musician will not be complete, if not to say about Chikatuev's composition work. The song, which revealed his composer talent to the fans, sounded on the radio of Karachay-Cherkessia in April 1983. It was an amazingly melodic and tender song "Memories of childhood." The first song cycles were written in collaboration with the poet Kerim Mkhtse.

Today, Chikatuev’s composer’s discography includes more than a hundred beautiful songs, the texts of which are also written by Ali Ionov, Umar Kishmahov and the author of this essay (Bilyal Khasarokov - ed.). The range of songs is wide, both musically and by subject. These are songs about peace and war, about the Motherland, about love and the family hearth, about the fate of the native people, philosophical reflections about the life and future of the younger generations. Today these songs can be called classics of the Abaza variety stage, they occupy a worthy place in the cultural wealth of the Karachay-Cherkess Republic.

In recent years, thanks to modern information and communication technologies, representatives of the Diaspora living abroad have been actively involved in the work of Vladimir Chikatuev and the groups created by him. 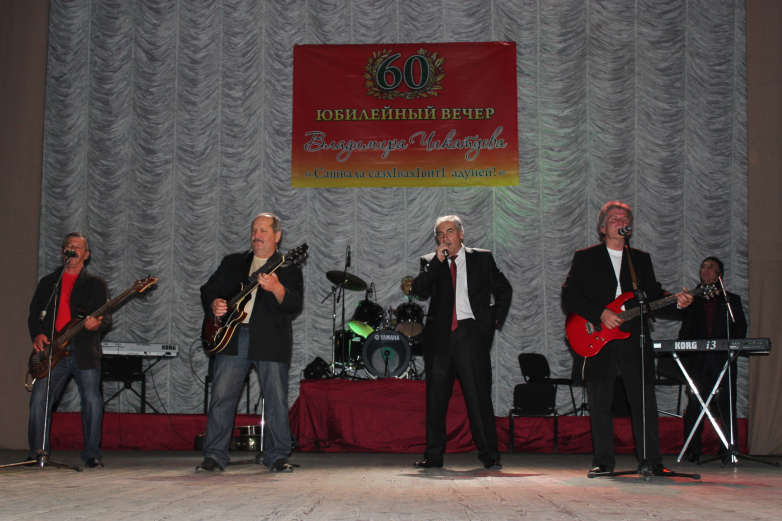 The long-awaited performance of the "Abazinka" group at a concert dedicated to the anniversary of Vladimir Chikatuev. Cherkessk, 2012
© Photo by Bilal Khasarokov Today, Vladimir Chikatuev is among the honorable number of the best cultural figures of the republic and continues his active creative life. The new direction of his work - musical arrangement of productions of the State Abaza Drama Theater: Chikatuev manages the musical part. Many of his plans are still about to enter the cultural treasury of not only the Abaza people, but also the entire Caucasus. Vladimir Ramazanovich is convinced that any gift given from above must be used not for the sake of self-interest, but for the good of the people.

Art Personalities Vladimir Chikatuev
To leave a comment you need
to login or register.
Share
No comments