The World Abaza Congress organized and held a holiday for children from the villages of Pakuash, Reka, Baslakhu, Akuaskia and Gup.

More than 200 children from the villages of Pakuash, Reka, Baslakhu, Akuaskia and Gup took part in the holiday organized by the World Abaza Congress. The event was held in the village of Pakuash on June 16 and was timed to the June Children's Day.

Earlier, a resident of Pakuash, Arkady Khashba, asked the WAC to organize a children's party for the residents of his native village and nearby villages. He said that in the village of Pakuash already know about the activities of the World Abaza Congress: representatives of the WAC came with a story about the organization and its activities six months ago.

“We took the ideas of the Congress with great enthusiasm, and when we saw online that the Congress held a holiday event for children at the Atara School, we addressed the WAC with a request to hold the same event at our place. On my own behalf and on behalf of all residents of the village of Pakuash, I express my deep gratitude to the Congress for today's holiday,” said Khashba. 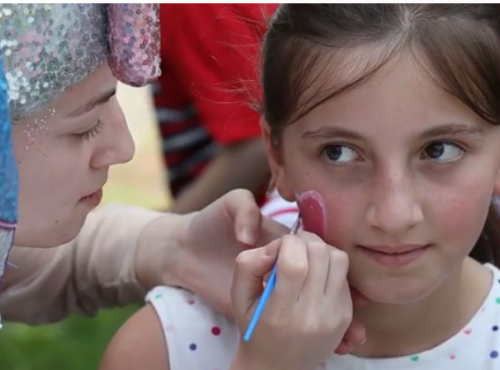 He added that “this is the first such event in his native village for the whole post-war period (after the Patriotic War of the people of Abkhazia 1992-1993 - ed.).”

At the beginning of the holiday, all the participants on behalf of the Chairman of the Supreme Council of the World Abaza Congress Mussa Ekzekov were welcomed by the Executive Secretary of the WAC Inar Gitsba. He recalled that the Congress in its work pays great attention to children, supporting young athletes, talented children, as well as opening courses to learn the native language.

“Thank you very much to the heads of all the villages who brought the children to the holiday and, of course, to the chairmen and members of the local branches of the WAC in these villages. Thanks to our partners, in particular, the head of the “Premium” company Astamur Gaguliia, entrepreneurs Rezo Zantaria, Ruches Ardzinba, Gudisa Shurdulava and all the friends of the Congress who supported today's event,” Gitsba thanked.

Before the start of the holiday, children were expected to “transform” into their favorite characters: animators, themselves dressed in costumes of cartoon characters, applied aqua makeup to children's faces. Characters from the Spider-Man comic were the most among the boys. There were those who asked to draw Batman, Superman and other famous heroes. Girls were curious about the flowers, and many wanted to become little ponies.

Life-size puppets - cartoon characters - talked with guests throughout the holiday. Children were able to take pictures with one of the most popular characters - Bumblebee transformer.

Another surprise was an unforgettable soap bubble show. Children competed with each other, who will get the biggest bubble that will not burst for a long time.

Children danced and enthusiastically played serpentine and danced to the Abkhaz music with special love. The participants in the chorus sang the famous Abkhaz song “Aiaaira” (in translation from the Abkhaz - victory - ed.). Many kids recited Abkhaz poetry. Children also took part in a fun relay race. At the end of the holiday, all the children received sweet gifts from the WAC.

Milana Gindia is 12 years old; she lives in the village of Pakuash. Talking about the holiday, the girl was literally unable to catch her breath after active and fun games.

“I had a lot of fun. I always wanted to see Sky (the heroine of the famous children's cartoon “Paw Patrol” - ed.). Thank you so much! I want this holiday to happen again,” the girl wished.

Sandro Pachulia, Milana’s fellow villager, admitted that he had never taken part in such holidays for his 10 years.

“I liked the soap bubbles the most. It was very funny. We danced and sang a lot in the Abkhaz language,” the boy said.

Damir Chitanava arrived for a holiday from the neighboring village of Baslakhu. He is 11 years old. He came with his mother. At first, the boy was a little shackled in the company of unfamiliar guys, but then he started to dance with everyone.

“I liked the paper show the most. I also saw Bumblebee. Thank you!” - said Damir.

Ten-year-old Anrik Narmania came from the village of Akuaskia with his parents. With a painted and shining face and a broad smile, Anrik said that he was “so happy.”

“Thank you very much to everyone for this holiday. We had a lot of fun,” he said.

At the end of the evening, a paper show awaited all the participants of the celebration, as well as the children at the celebration at the Atara school in early June.

International Children's Day is celebrated around the world in June - one of the oldest international holidays. The decision to hold it was made back in 1925 at the World Conference on the well-being of children in Geneva. However, for the first time it was possible to celebrate this holiday only 25 years later - in 1950, after which it began to be held annually. A variety of children's parties and shows are timed to coincide with this day. However, Children's Day is not only a children's holiday, it is also a reminder to society about the need to protect the rights of the child so that all children grow up happy, learn, do what they love and in the future become wonderful parents and citizens of their country.