Poet Mushni Lasuria: "In the very labor was my reward"

The people's poet of Abkhazia, an outstanding translator, who gave Abkhaz readers the opportunity to hear in their native language the works of the classic of Russian literature Alexander Pushkin and the poems of many other poets, Mushni Lasuria continues his active creative activity even at the most respectable age.

Mushni Lasuria was born on January 16, 1938 in the Abkhaz village of Kutol in the family of a respected person, a talented narrator Tay Lasuria. In a large peasant family, besides Mushni, there were three more sons and four daughters. One of the older brothers - Datikua was a pilot during the Great Patriotic War, he died heroically near Leningrad in 1944.

Mushni Lasuria began to write poems at the age of 10-11, when he studied at the eight-year Kutol school. In one of the television interviews, he said: "I think few become poets who pre-plot to create great works and become famous in this path and thereby create their own fame and name. No, this is very seldom in my opinion. Rather, these are some voices, if one can say so, a sound that we hear from within." 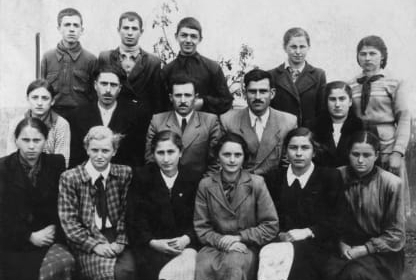 From the "Village of writers"

Mushni Lasuria has repeatedly publicly noted that the place of birth itself played a certain role in his passion for poetry, it is not for nothing that the village of Kutol is considered the birthplace of many Abkhaz poets and writers, it is often spoken of as a "village of writers".

In 1953, after graduating from the Kutols school, Mushni Lasuria entered the Sukhum State Pedagogical School. At one of the meetings of the literary circles, young Mushni met Shota Salakaya, who was at their home in Kutol several times, talked with Mushni’s father, Tay, recorded various folklore tales and legends. Then Mushni was a schoolboy, and now they were almost equal, both immensely passionate about literature and poetry, and the age difference of five years between them ceased to exist. Thus began a lifelong friendship.

"We went to literary circles, listened to poetry with enthusiasm, then sorted out, discussed. Of course, our friendship began precisely against the background of a general interest in literature" notes Shota Salakaya, Ph.D. 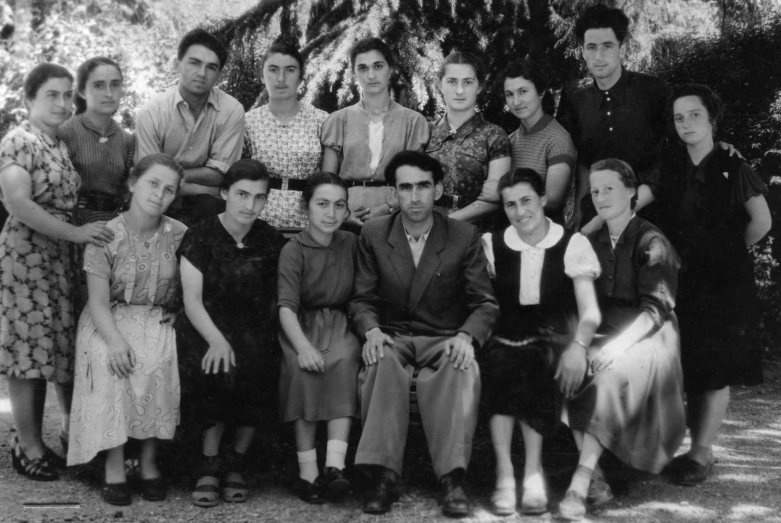 Participants in the literary circle at the Sukhum State Pedagogical School. In the center - teacher P. Adzinba, 1957
© From the family archive Lasuria

In the Literary Institute

Reflecting on his studies at a literary institute in an interview with Abkhaz television, the national writer noted that the most important for him at the Literary Institute was how to put aside all sorts of "political" poems - about the Komsomol, about socialist realism - and make it clear that poetry  is the freedom of expression, the expression of your own self. Having received such a message from his mentors, Lasuria trusts the most personal and heartfelt to writing.

"Mushni Lasuria began as a heartfelt lyric poet, notes his friend and expert on his works Shota Salakaya, and I must admit that his early lyrics have become a new word in our literature and have taken an honorable place in it. These lyrics are more decisively than the works of the predecessors of Lasuria, separated from the folklore. It is much more personal, painfully confessional and shows to the world the distinctly expressed character of its author."

The poet recalls years of study in Moscow, including postgraduate years, he spent there ten years, as filled with communication with young people who are passionate about literature as much as he himself. They talked a lot, met a lot, especially at literary and poetic evenings. As an excellent reader, he was asked to read excerpts from Pushkin's "Eugene Onegin" or from Lermontov's poem "Mtsyri". 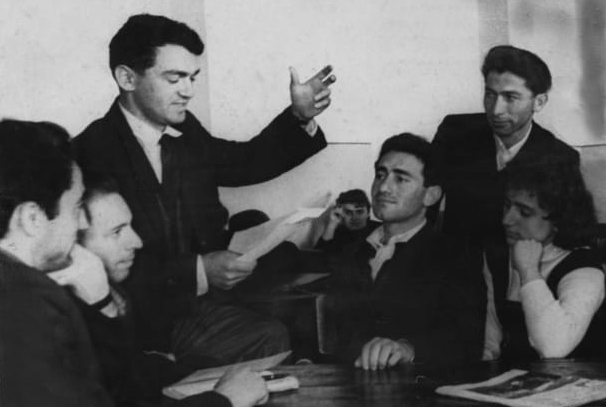 In 1974, after returning from Moscow, Mushni Lasuria began working at the Abkhaz Scientific Institute named after Dmitry Gulia, a research associate, later a senior research associate, and from 1988 headed the literary department of this scientific institution. At various times, Mushni Taevich Lasuria was the chief editor of the "Alashara" publishing house. For almost ten years he was the chairman of the Union of Writers of Abkhazia, and all this in combination with vigorous creative activity. 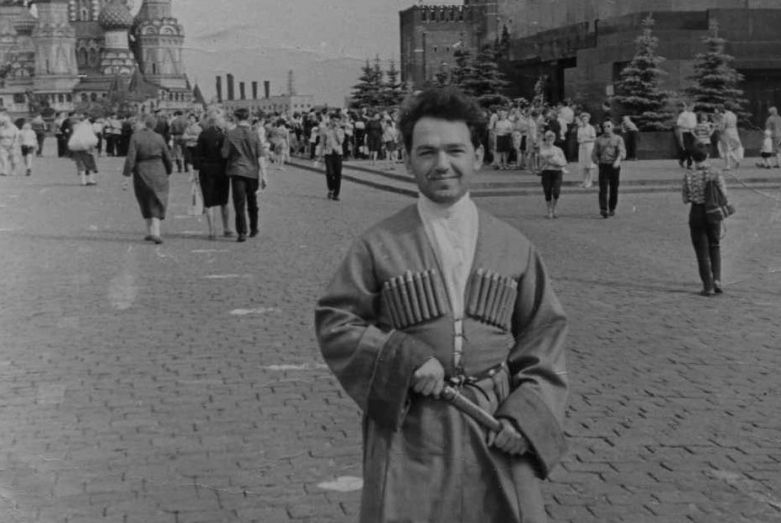 Graduation Day of the Literary Institute, July 25, 1965
© From the family archive Lasuria 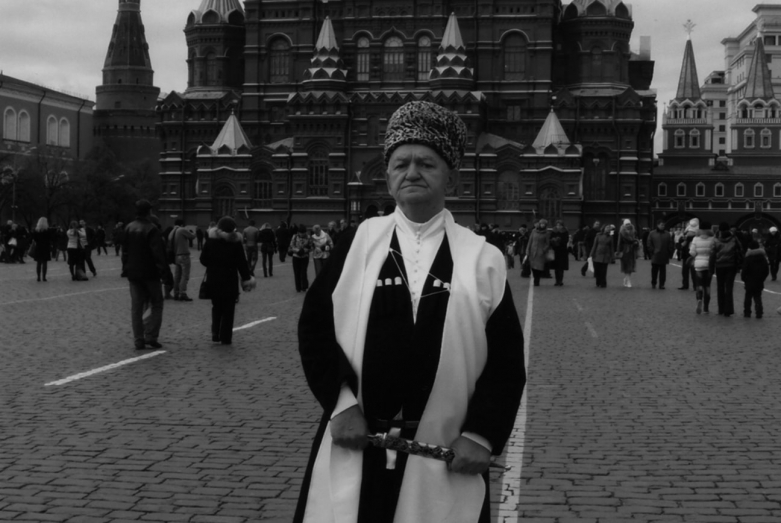 At the same place 45 years later, November 2010
© From the family archive Lasuria

Starting as a lyricist, Mushni Lasuria reached even epic genres, so he created the poem "Golden Fleece", which Fazil Iskander described as follows: "In this poem, a concentration of epic motifs unprecedented in Abkhaz poetry emerged, it shows the richness of centuries-old song folklore ... A poem that has become a tragic hymn to its native country."

Another monumental work of Mushni Lasuria was a novel in verses "Fatherland", dedicated to the Patriotic War of the people of Abkhazia 1992-1993. Working on the creation of this work for quite a long time, he managed to create inside it the images of genuine heroes - defenders of the motherland, as well as the enemy-destroyer. There are also very specific images in the "Fatherland" - for example, Vladislav Grigorievich Ardzinba, who headed the Abkhaz state, or the talented poet Taif Adzhba who went missing during the war.

According to Shota Salakaya, Mushni Taevich was obsessed with the idea of ​​writing such a novel  for a decade. Some of his poems gradually appeared in print, united by a common theme, such as "Rally in Nalchik", "I am your son, Kabarda", "Abkhaz girls", "Spread your wings, Abkhazia", and later they all harmoniously merged into a novel in verse. 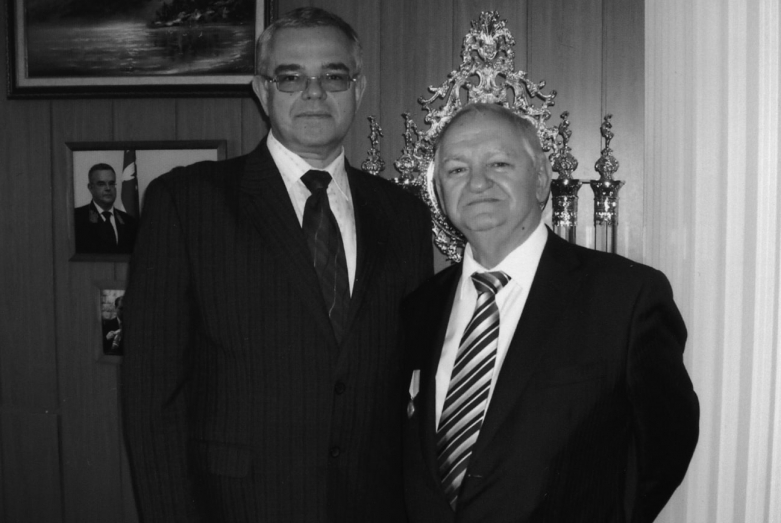 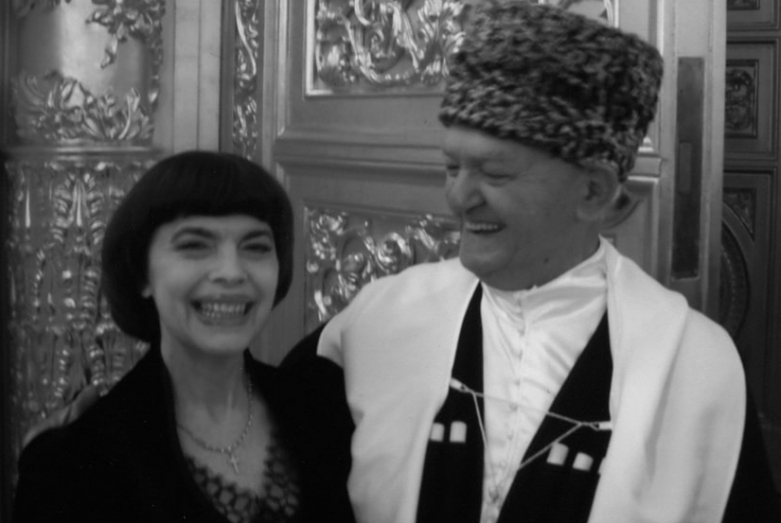 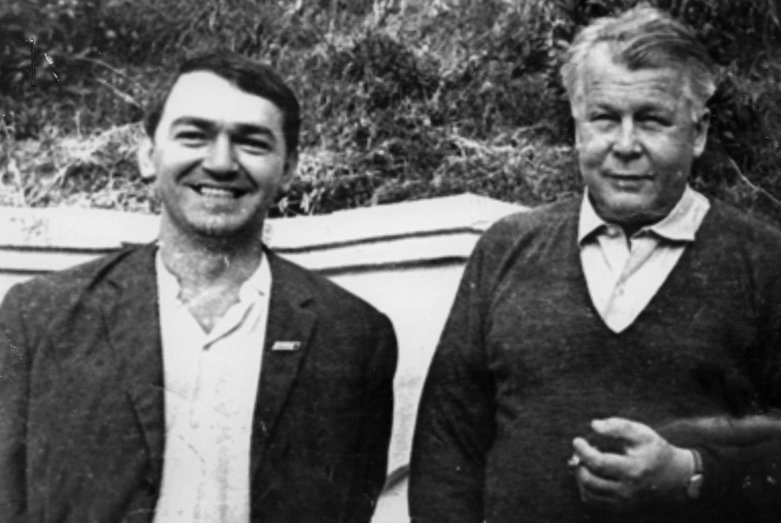 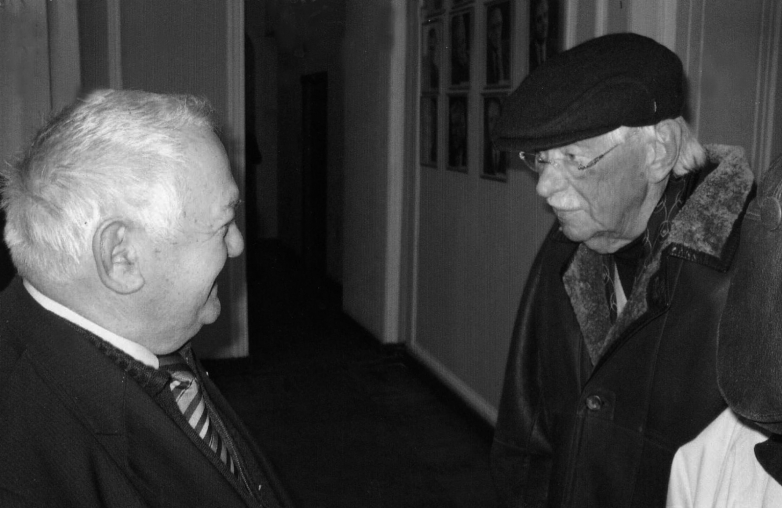 Mushni Lasuria and Sergei Mikhalkov during the meeting of Russian writers living abroad, 2007
© From the family archive Lasuria

More than once, Mushni Taevich Lasuria himself noted this very work as one of the dearest to his heart, and even wrote about it in verse:

To you, the Most High, forever grateful
For giving me my mother tongue,
That the muse has not left me,
That you did not take away my life and courage,
What I said is all that I wanted,
Glorifying those, and accusing these
In the work itself was my reward.
Thank you - I do not need more!
And I don’t say that people are rich,
Like overripe, bursting grenade,
Could this heart break.
My homeland is eternal wealth,
In tears, in sweat, in despair, in blood,
You - earthly mite. You live!

Work of a translator

Another significant part of the creative work of Mushni Lasuria is a literary translation. Perhaps the most famous work of Lasuria in the field of translations is the translation into Abkhaz language of the novel in verses by the classic of Russian literature Alexander Pushkin "Eugene Onegin". Shota Salakaya notes that before working on "Onegin", Mushni Lasuria had already successfully translated the poem of another classic of Russian literature Mikhail Lermontov, but it was the poem "Mtsyri", the content of which is directly related to the Caucasus, and therefore it was much easier to translate. "Eugene Onegin" is quite a different thing, the product is deeply Russian, national, showing the way of life, which is radically different, both from the Abkhaz and from the Caucasian one.

"To translate all this rich content of the classic novel into the language of young-written literature without disturbing the imaginative system of the original source is an extremely difficult task, Salakaya notes. And it is more encouraging to note that Lasuria brilliantly coped with it and eventually reproduced a non-pale copy of the original, and created a work of art, which lived the second independent, full-blooded life."

For the translation of "Eugene Onegin" in 2010 in the St. George Hall of the Moscow Kremlin, the President of Russia Dmitry Medvedev handed at that time already the national poet of Abkhazia Mushni Lasuria the "Medal of A.S. Pushkin", and in 2015 another translation work of Lasuria - Shota Rustaveli’s poem "The Knight in Tiger Skin" brought the poet an award in the form of the All-Russian Delvig Prize. 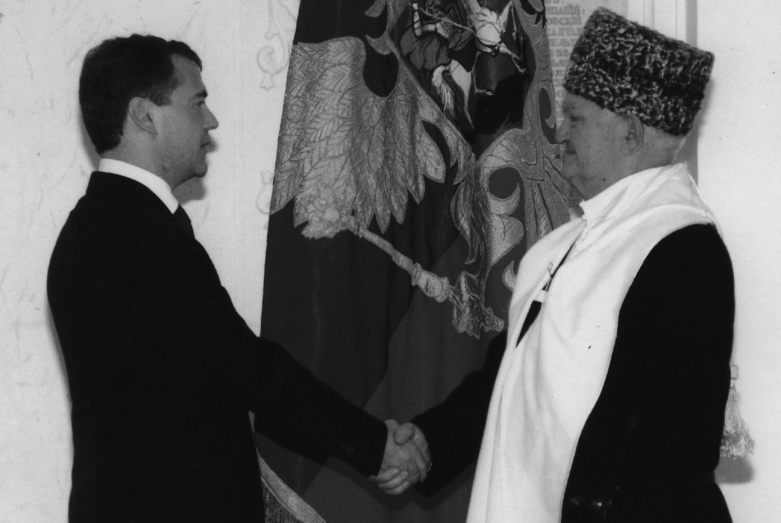 Russian President Dmitry Medvedev presents Mushni Lasuria the Alexander Sergeevich Pushkin Medal for his great contribution to the strengthening of friendship, cooperation and the development of cultural ties with Russia. Moscow, St. George's Hall of the Kremlin
© From the family archive Lasuria

Over the eighth decade

In 2018, the eightieth anniversary of Mushni Lasuria was widely celebrated in Abkhazia. In honor of this date, with the wording "for outstanding achievements in the development of Abkhaz poetry, literary studies and fiction", the People’s Poet was awarded the Order of Honor and Glory of the first degree, and the Abkhaz State Drama Theater hosted a jubilee evening of the poet, at which many congratulations were voiced for the hero of the day. The director Madina Argun staged a poetic performance, consisting of reading excerpts from the works of Lasuria. 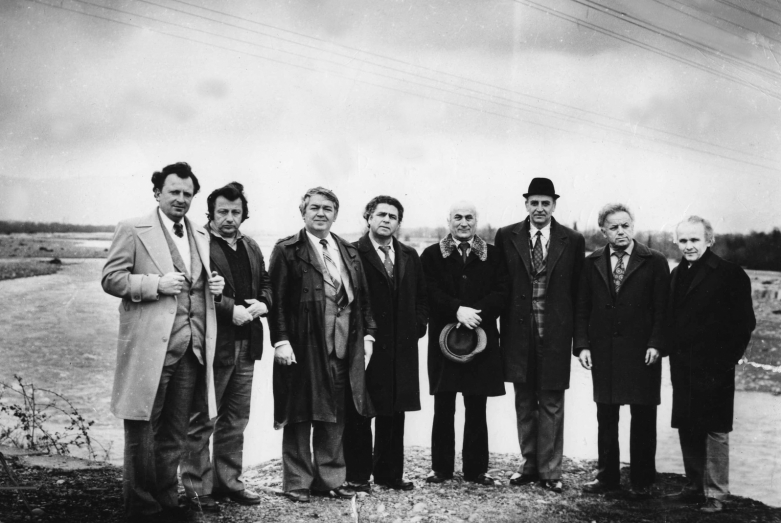 On the day of the celebration of the 90th anniversary of Bagrat Shinkuba, Sukhum, 2007
© From the family archive Lasuria Mushni Lasuria, despite his venerable age, tirelessly engaged in creativity, he recently published his new poem "Ашаеҵәа" ("star of dawn" from the Abkhaz - ed.). According to the friend of the poet, Shota Salakaya, the reliable backing of Mushni Taevich was always his wife Elena Otyrba, the daughter of the well-known political figure Aslan Otyrba, who, unfortunately, died quite early. Together, they raised two beautiful daughters, Rabia and Astanda. Mushni Taevich Lasuria was awarded many awards and honorary titles. For example, he was previously awarded the title of Chevalier of the Order of Honor and Glory of the second and third degree, laureate of the state prize named after Dmitry Gulia, and received the title of People's Poet in 2009.

However, in many interviews and speeches, Mushni Lasuria noted that for him the most important achievement in life was always the opportunity to create: "Any person, be he a writer, teacher, peasant, doesn’t matter, wants to leave his mark in this world. Some want to leave descendants, others to plant a tree, and us, the writers, we will leave what we write."