Tatlustan Tabulov is the pioneer of Abazin literature, the first collector of national folklore, the author of the first letters and textbooks on Circassian and Abazin languages, the first professional abazin-speaking writer. He was a man of great spiritual charisma, passionately fought for the enlightenment of his people, acquisition of written language, great literature and culture by them.

Beginning of the way

Tatlustan Zakerievich was born in 1879 in the village of Biberdovsky (now Elburgan village - ed.) of the Abazin district of the Karachay-Cherkess Republic in the family of the foreman of the district Zakeriya Hasanovich Tabulov. Zakeria Hasanovich was married twice and from both marriages had five children: three sons and two daughters. Tatlustan was the second child from his first marriage.

The father of the future educator was illiterate, but a wealthy peasant. According to his fellow villagers, in addition to agriculture, he was engaged in transportation and had his own "mail" - postal crews and horses. 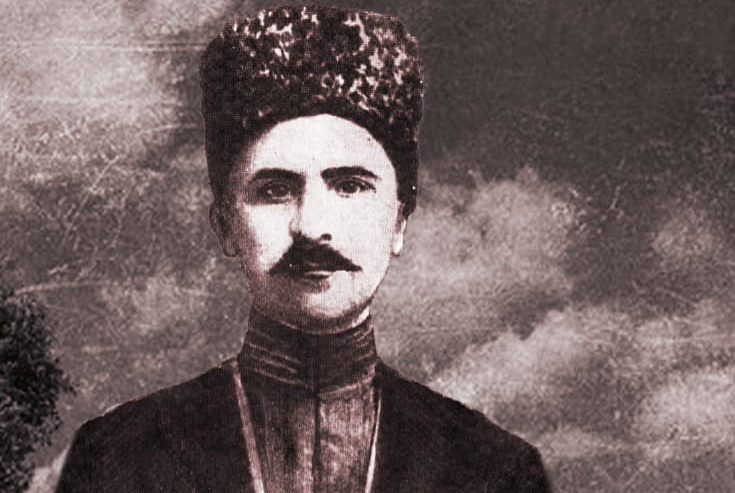 Tatlustan started his studies at Umar Mikerov's school in Biberdovsky village, in 1905 he graduated from the first course of the Ardon Seminary. In the archival case of Tabulov there is a reference to the fact that from 1910 to 1914 he studied, but not specified exactly where. Probably in the Madrasa. In 1914 he became a teacher in the elementary school of the Biberdovsky village. In parallel with teaching, he served as an effendi (mullah - ed.). The following year, at the conference of teachers of the Batalpashinsky department in Teberda, he offered to teach both boys and girls to read and not only in Arabic, but also in Russian, for which he was suspended from teaching. 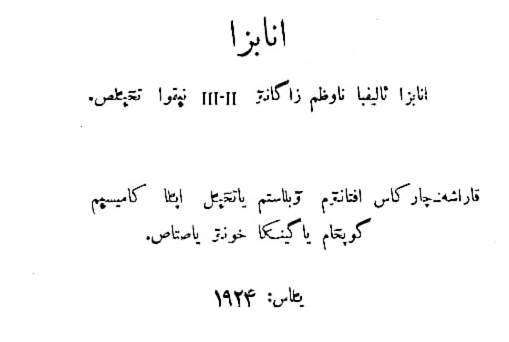 The title page of the second book for 2-3 sections of Tatlustan Tabulov "Anabze" in the Circassian language in the Arabian graphics, Batalpashinsk, 1924
© From the family archive 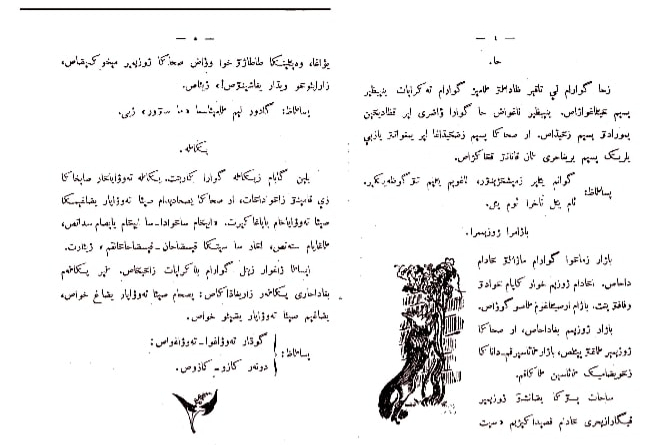 The title page of the second book for reading for 2-3 sections of Tatlustan Tabulov "Anabze" in the Circassian language in the Arabian graphics, Batalpashinsk, 1924
© From the family archive 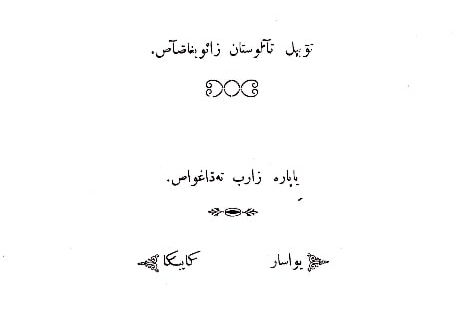 Tabulov got married quite late. He married a fellow villager Barzikhan Kalambekovna Kenzhekulova. The firstborn was born in 1918, and the couple had 11 children, four of whom died in childhood. 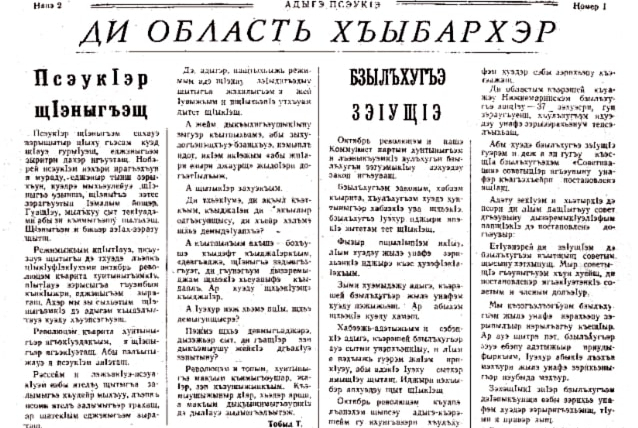 The second page of the first issue of the Circassian newspaper "Adygskaya Zhizn" with the article of Tatlustan Tabulov "Life is about learning" in the Latin graphic, October 12, 1924
© From the family archive 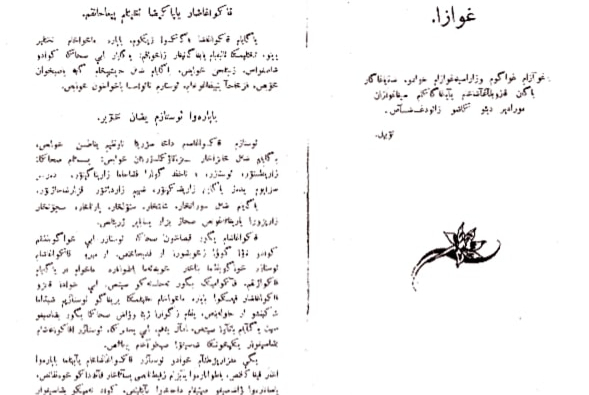 Already under Soviet rule, Tatlustan Zakerievich was again appointed a teacher at the Elburgan High School. In these years, his educational activity begins. In 1924, Tabulov developed the alphabet of the Circassian language in Arabic alphabet, which was used in publishing and school practice for the next four years (In 1928, a new Circassian alphabet was created in the Latin alphabet without the participation of Tatlustan Zakeriyevich - ed.). In the period from 1925 to 1932, Tabulov published in the Circassian language 13 primers, working books after the primer, books for reading, methodological manuals, and in 1929 a collection of poems, dramas and dramatic works "Zuli". 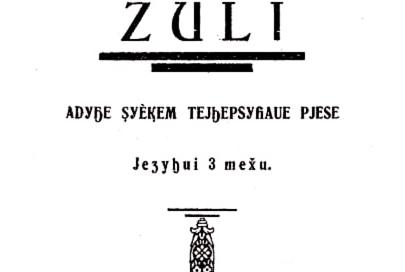 Since the beginning of the publication of the Circassian newspaper "Adygskaya Zhizn" actively cooperated with its editorial staff: in the first issue he published a note "Life is about learning", and in the second one - a great article "Effendi and Sins", which occupied almost the entire first page. He also published correspondence in the Russian-language newspaper "Krasnaya Circassia" both independently and in co-authorship with Berezkin, Nartbiev, Bezdolov (pseudonym of Semyon Babaevsky, a famous Soviet writer – ed. note). 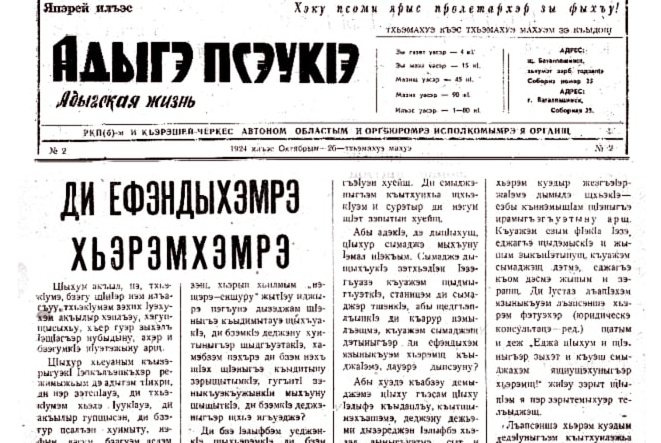 The first page of the second issue of Circassian newspaper "Adygskaya Zhizn" with an article by Tatlustan Tabulov "Effendi and Sins" in the Latin graphics, October 26, 1924
© From the family archive 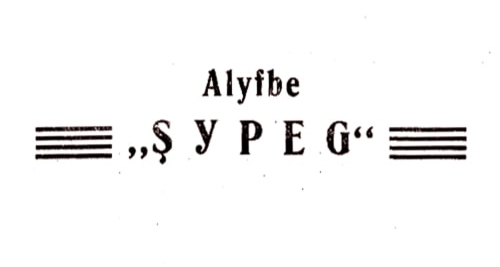 The title page of the literal letter of Tatlustan Tabulov "Shchypedzh" in the Circassian language in the Latin chart, Batalpashinsk, 1929
© From the family archive

In 1930, Tatlustan Zakerievich moved to the town of Batalpashinsk, where he first became a teacher in Pedagogical technical school, and from April 1932 - actually from the day of foundation - a junior research assistant, head of the Abazin language sector in the Language and Literature Department of the Circassian Research Institute. 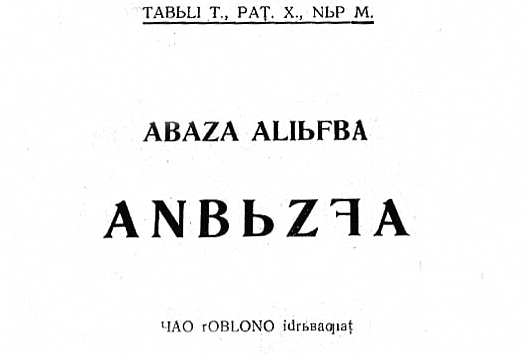 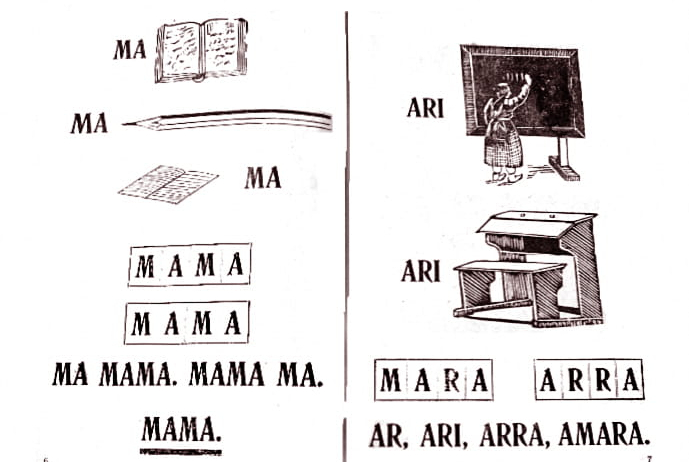 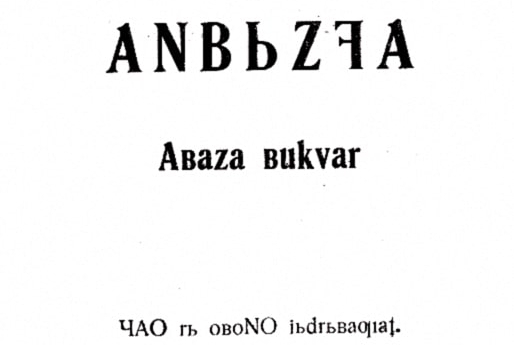 In March 1933, Tabulov made the first expedition to collect national folklore material. A little later he was assigned to the Leningrad professor Anatoly Genko, who helped him master the problems of Abazin grammar. Tabulov had occasion to meet at work with Sergei Ozhegov, compiler of the explanatory dictionary of the Russian language. In the autumn of the same year, Tatlustan Zakerievich became a post-graduate student in a graduate school open at the Circassian Research Institute, but the following year, due to a sharp reduction in appropriations, postgraduate studies were closed. For the same reason, the sector of the Abazin language was abolished, and its head was dismissed. Subsequently, Tatlustan Zakerievich will return to work in the Circassian Research Institute, where in 1945 he will publish his first scientific work. The title page of the textbook of the Abazin language of Tatlustan Tabulov "Grammar and spelling" in the Latin graphics, Batalpashinsk, 1933
© From the family archive 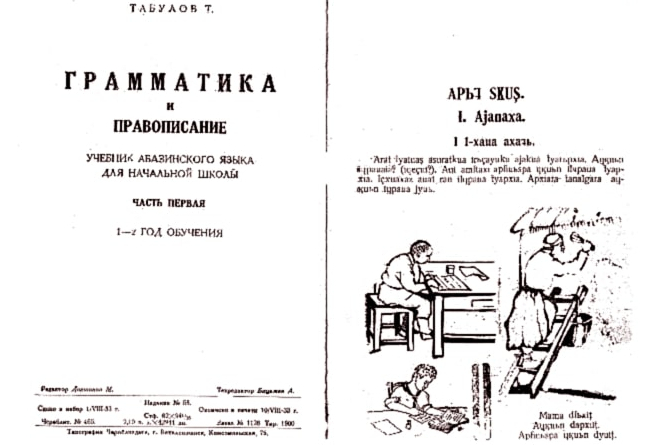 The title pages of the textbook of the Abazin language of Tatlustan Tabulov "Grammar and spelling" in the Latin graphics, Batalpashinsk, 1933
© From the family archive 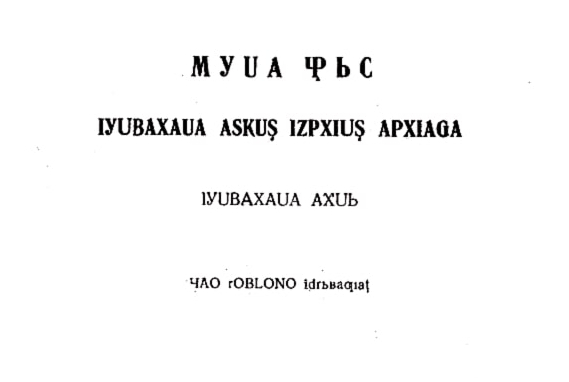 The title page of the book for reading of Tatlustan Tabulov in the Abazin language "New way" in the Latin graphics, Batalpashinsk, 1933
© From the family archive

Even before these events – on November 25, 1932 in Batalpashinsk, a conference of Abazin teachers with the active work of Abazin workers was held, at which the decision of the All-Union Central Committee of the New Alphabet was announced on the introduction of the Abaza alphabet in the Circassian autonomous region. The conference discussed and approved the Abazin alphabet compiled by Tatlustan Zakerievich on a Latin basis and the primer. For 8 pre-war years, using the experience of Russian school textbooks, Tabulov independently and in collaboration with others published 19 alphabets, textbooks on Abazin grammar, textbooks and books for reading after the primer. Textbooks included folklore, translated, adapted works, as well as works by the author himself. In 1934, Tatulstan Zakerievich was admitted to the Union of Writers of the USSR: the membership card signed by Maxim Gorky (famous Soviet writer - editor's note) was issued to him on December 19. The title page of the book for reading after the primer "The New Way", created by Tatlustan Tabulov in co-authorship with H. Kuzhev in the Abazin language in the Latin graphics, Sulimov, 1936
© From the family archive The title pages of the book for reading after the primer "The New Way", created by Tatlustan Tabulov in co-authorship with H. Kuzhev in the Abazin language in the Latin graphics, Sulimov, 1936
© From the family archive The title page of the Abazin alphabet for adults, created by Tatlustan Tabulov in co-authorship with H. Kuzhev in the Latin graphics, Sulimov, 1936
© From the family archive

Tabulov in the 1930s combined literary work and work on school textbooks with teaching activities in the Circassian Pedagogical technical school, Circassian Research Institute and the National Publishing House. In addition, he was an instructor in the Abazin script and a consultant on the teaching of the Abazin language at the pedagogical college. According to the recall of Professor Genko, Tatlustan Zakerievich was at that time "the only serious Abazin worker" in Circassia. A lot was attached to him, and therefore it was impossible even for a while to recall him for professional retraining, otherwise all the work that he was leading could stop. And there was no one to replace him at that time. Tabulov's educational and literary activities were interrupted unexpectedly: on September 19, 1937, he was arrested by officers of the Office of the People's Commissariat of Internal Affairs of the Circassian Autonomous Region. During the search, two folders of manuscripts, a passport, a trade union ticket, a membership card of the Writers' Union of the USSR were seized. The convict was aged 57 - 58, and the youngest daughter was only 3 years old. According to the memoirs of Nurya Tabulova, the eldest daughter, the father took with him a thick winter coat and put it on during interrogations, regardless of the season. Tatlustan Zakerievich was accused of participating in a mythical anti-Soviet bourgeois nationalist organization allegedly operating in the Circassian Autonomous Region. He spent two years in the Circassian prison, having experienced all the horrors of torture and humiliation. After exposing the atrocities of Nikolai Yezhov, People's Commissar for Internal Affairs of the USSR, on September 13, 1939, he was released for lack of corpus delicti. Form of the arrested person
© From the family archive Letter to the head of the URKM of the NKVD in the Circassian Autonomous Oblast with a request to issue documents to Tatalustan Tabulov, released from custody
© From the family archive

After the release Tabulov was immediately involved in the work on the preparation of teaching aids. Already in the following year, in his anthology for literature for the fourth grade, his major poem "The Old Man the Sage" was placed, which is considered the first Abazin poem. In the spring of 1941, in the newspaper "Krasnaya Circassia" Tabulov published three more poems created on the Nart basis.

Tabulov perceived the Great Patriotic War as a great personal calamity and was ill for a long time because of this. During the occupation of the region by the Germans, he was invited to return to religious activities, to which he responded with an old Abazin proverb: "The ash that was brought back is no longer warming."

When the war was over and the issue of the national newspaper resumed, he visited the editorial office in the morning, hugging employees as if this event were his holiday. With the first postwar issue of the newspaper, he went to the pedagogical school, to the oblono (regional department of public education – ed. note), to the printing press, shook hands and shared joy.

Despite his advanced age, Tatlustan Zakerievich continued to work actively. In the post-war years, he published two scientific works, prepared two more manuscripts, translated and published Nikolai Chukovsky's novel "House on the River", participated in the preparation and production of 12 programs, collections of exercises, textbooks on the Abazin language, textbooks on native literature, including his own works on a folklore basis. In 1947 he published the first collection of Abazin fairy tales, and in 1955 - the second in collaboration with Konstantin Shakryl (a Caucasian scholar, professor, an expert on Abkhaz-Adyg languages - ed.). This was his last contribution to the Abazin culture. The following year, he died. In the courtyard of the secondary school of the village of Elburgan on the opening day of the monuments to Umar Mikerov and Tatlustan Tabulov, May 8, 2001
© From the family archive

Professor Vladimir Tugov so spoke about the personality of Tabulov: "Tatlustan Zakerievich Tabulov was the person who most fully and brightly, most powerfully and comprehensively accumulated the creative power of the people, unchained potential spiritual forces, his ability to create creatively ... He was a versatile gifted man: the compiler of the first national alphabets of Circassians and Abazins, a whole library of textbooks and teaching aids, dictionaries, the author of the first works of art, scientific works, collector and publisher of folklore monuments ... "