The World Abaza Congress and ANO "Alashara" have formed and approved a new program for the development and preservation of the Abkhaz and Abaza languages.

The World Abaza Congress, together with ANO "Alashara", supplemented and approved a program for the preservation and development of the Abkhaz-Abaza language. The adoption of the program is timed to the International Mother Language Day, which is celebrated on February 21.

Mussa Ekzekov, Chairman of the Supreme Council of the WAC and President of ANO "Alashara", noted that it is important to put maximum efforts in implementing the tasks of developing and preserving the native language.

"The native language is a unique treasury of history for each of us, a source of spiritual strength and a guarantee of a bright future for the people. Preservation and proficiency of the native language, respect for it is the way to preserve one's national identity, to foster respect and love for the history and culture of nations," Ekzekov said.

He is convinced that the Abaza people will be able to pass on their native language to descendants as the greatest asset, if many representatives of the people join the efforts.

The head of the program, Professor Sergey Pazov, told about the updated program for the development and preservation of the language of the Abaza people.

Six steps of the program

The linguist explained that the creation of the program was initiated by Mussa Ekzekov, it was developed back in 2019.

The amended action plan for the preservation and development of the language consists of six parts. The first is the training and retraining of teaching staff.

"This is the work on vocational guidance for school graduates, helping graduates when entering universities to study their native language, as well as the history and culture of the peoples of Russia," the professor explained.

The third part of the program is the development and publication of educational literature.

"This includes textbooks and educational-methodical developments, anthologies, collections of materials for use in the educational process of preschool educational institutions, as well as secondary and higher schools. Educational literature prepared in a planned manner after expert assessment is published at the expense of ANO "Alashara", said the scholar.

Another layer of activity under the program is theoretical and applied research of the Abaza and Abkhaz languages. Such studies mean fundamental research of the Abaza and Abkhaz languages, the methods of teaching them in secondary and higher schools, the history and ethnography of the Abaza ethnic group, applied research and development necessary to ensure the educational process in secondary and higher schools. This also includes the implementation of individual studies of sociological character, followed by analysis of the materials received and development of certain recommendations. 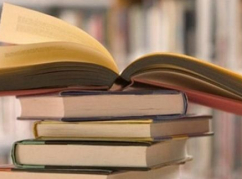 The fifth "step" of the program is to popularize knowledge of the Abaza language and literature.

"Within the framework of this part of the events, various scientific-theoretical and scientific-practical conferences, seminars, round tables will be held with the participation of specialists from Russia and Abkhazia and with the involvement of interested persons from the Diaspora. It is planned to organize and conduct annual summer educational, scientific and health-improving schools for students who have distinguished themselves in competitions and Olympiads in the Abaza and Abkhaz languages," explained Sergey Pazov.

The last part of the program included the development of the Abkhaz-Abaza alphabet based on the Cyrillic alphabet and its approbation.

According to Professor Pazov, the issue of creating such an alphabet has been considered for a long time, now there are various versions of the alphabets, but there is still no option that can be called experimental.

"Developing a new alphabet does not mean putting it into practice immediately. That is why it is called experimental, that it will be necessary to first carry out approbation on a certain platform, to discuss the possibility of its use in Karachay-Cherkessia, Abkhazia, Turkey and other countries where Abaza and Abkhazians live compactly," the professor explained.

The program manager said that its implementation began in 2020, but the first year of work peaked in an unfavorable period of the spread of the coronavirus. The restrictions imposed did not allow the full implementation of the activities scheduled for 2020. Some of them were postponed to subsequent years. 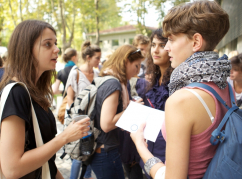 Abkhaz at the Bosphorus University: Abkhaz and foreigners learn the language in Turkey

Among the priority tasks, in addition to publishing a large list of methodological, reference materials and dictionaries, Sergey Pazov also named the creation of electronic databases, primarily the electronic corpus of the Abkhaz and Abaza languages.

"We are talking about all available texts published in the Abkhaz and Abaza languages. Entering them into the database may take few years. Therefore, within the framework of the program, the database itself, a computer program, lexical analysis of texts etc. will be tested. First of all, we are talking about folklore texts, texts of fiction," the professor explained.

Who is involved in the program?

According to the head of the program, leading scholars and specialists in the field of language, literature and history of Abaza and Abkhazians are already involved in the work on it and will still be involved. 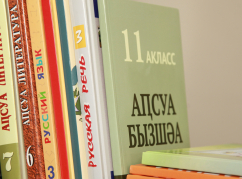 Abkhaz language for beginners: where in Abkhazia one can learn the native language

"In 2019, when the main program was approved, 25 people were designated as its executors. As the activities are implemented and due to the emergence of the need to solve new problems, this list is changing, new specialists, young researchers will be involved," Pazov added.

He noted that numerous events within the framework of the program were and are taking place with the assistance of ANO "Alashara".

"Look how many educational and methodological developments for preschool institutions and secondary schools have appeared recently. Research work is underway with the subsequent publication of their results, and how many events have already been carried out, how many texts of oral folk art, fiction, reference literature have been published and republished, and thus preserved for the history and culture of the people. We can name a lot more of them. This is the result of the active work of various programs of "Alashara", said Sergey Pazov.

Motivation to learn the language and its revival

According to the head of the program, it is necessary to work towards the formation of motivation to know and study the native language in order to revive it.

"A language must be in demand in all spheres of life to be developed, and not just at the everyday level. In this direction, perhaps, we are still less successful. The new version of the program has increased the number of events aimed at reviving interest in the native language - these are new conferences, readings, competitions aimed at preserving what is in the modern culture of the people, as well as an attempt to study the experience of revitalization of languages of small peoples. And such an experience is available," the professor summed up.

A meeting of the initiators and program staff to discuss the results of its implementation in 2020 will take place shortly.