The heads of the directions of the World Abaza Congress told about the results of six months of work of the current year.

The WAC team, whose work has intensified after the pandemic, summed up the results of six months of work in 2022.

According to the organization, after the removal of COVID-19 sanitary and epidemiological restrictions, it became possible to meet and communicate with people more, plan and implement new and long-planned plans and projects. 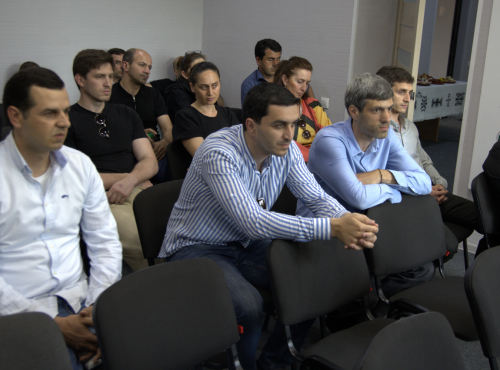 The principle of joint creative activity is one of the main ones for the World Abaza Congress. Local branches (LB) of the WAC have been opened in 43 settlements of Abkhazia, whose members are active citizens, local residents. The main objective of the LB is to interest and inspire, ideally, every resident of the country to take steps towards improving living conditions. Thus, the WAC contributes to the development of an active civil society in Abkhazia.

For six months, new municipalities were opened in the village of Dzyguta, Sukhum district and in the village of Barmysh, Gudauta district. In the past six months, for the first time, a general meeting of the heads of all local branches of Abkhazia was held. According to the coordinator of the LB and youth activity Dmitry Zhiba, at this meeting in the Sukhum office, two new projects of the WAC were approved, work on which will begin in the near future.

The coordinator of the direction said that, in addition to field trips, the WAC office is in constant contact with the heads of all local branches, who apply not only with certain ideas, but also for specific help.

"The main concept in working with local branches [is] that the initiative always comes from the residents themselves, from the active guys. Naturally, it is not possible to support and implement all initiatives at once, but in most cases we try to satisfy the needs of people," said Dmitry Zhiba. 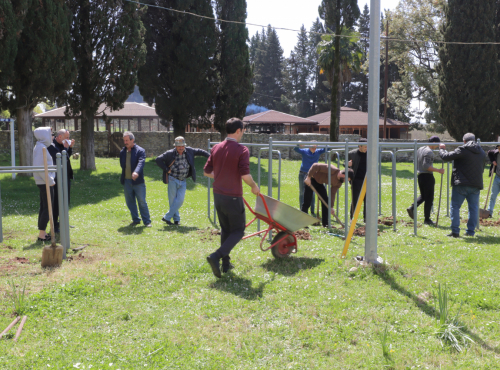 "Healthy mind": WAC equipped another sports ground in the village of Lykhny

As part of the "Amazara" project on the intangible heritage of the Abkhaz and Abaza, a new film has recently been shot, it is dedicated to the Abkhazian song. The film turned out to be informative and very beautiful. Its director and screenwriter was the Honored Artist of Abkhazia, head of the Samson Chanba Abkhazian Drama Theater Madina Argun. A month after the presentation of the film, exhibitions of paintings "Heroes of Abkhazian songs" were held in Ochamchira and Pitsunda. These are exhibitions of young artists whose works are based on the film. Then a general exhibition of 60 children's paintings by students of circles of the Ochamchira boarding school and the Pitsunda studio "Art.Vabaga" was held in the capital of Abkhazia. The works were exhibited at the Abkhazian Drama Theater on Children's Day on June 1.

After a yearlong break, the WAC resumed the "Ashtra" children's educational leisure project (translated from Abkhazian as "clan, origin" – ed.).), in which children from the villages of the Republic make excursions to the sights of Abkhazia.

"It would seem that Abkhazia is a small country, but there are a lot of those who have not been to neighboring regions. For example, children from the Gudauta district have not been to the Ochamchira district, and vice versa. We want children to see more, to get to know their country, travel around the regions and feel the richness of our nature, get to know their peers in different villages and regions of the Republic," Valery Berzenia, coordinator of the LB and youth activity, recalled the idea of the project.

He said that the pandemic had prevented communication and mutual visits of children for a long time, but now the "Ashtra" project has been resumed. The WAC and the "AMCH" public organization have already organized an educational excursion for the students of the Chlou Secondary School, during which the children, accompanied by teachers and parents, visited the Novy Afon cave, the "Pride" lion park, listened to an educational lecture in the Apsny Ethnopark.

New facets of the information portal

The portal of the Congress continued the educational direction of the WAC activity. Audio lessons on the Abkhaz and Abaza languages are published on the website and official pages of the WAC in social networks.

"The language project "We speak Abkhaz / We speak Abaza" continues on the portal of the Congress. As part of this online project, representatives of the Abaza people can start learning their native language, regardless of their place of residence in the world. For the first half of 2022, 80 lessons were published," said Amina Lazba, editor-in-chief of the information portal. 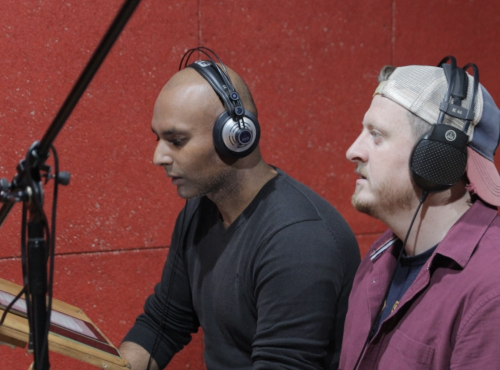 The information department of the WAC began to work in a new capacity. Continuing to cover the active work of the Congress, the information portal has implemented several special projects. The films "Abkhazian Songs" and "Asys" ("Lamb") were translated into all languages of the portal, titles were added. Both films are published on the portal. For the first time, the translation into English of the Abkhazian cartoon "Heroes of Abraskil" was carried out. The editor-in-chief of the information portal Amina Lazba carried out its translation and she was also in charge of the dubbing. She said that the cartoon is in the final stage of sound editing; its presentation is scheduled for the near future.

"Famous English-speaking characters already "speak" Abkhazian - Batman, Spider-Man and others. Now the Abkhazian hero Abraskil speaks English. This is a step towards promotion of the Abkhazian character outside the Republic. Many representatives of our foreign Diaspora speak English, and it will be interesting for them to watch the cartoon," Lazba is sure. 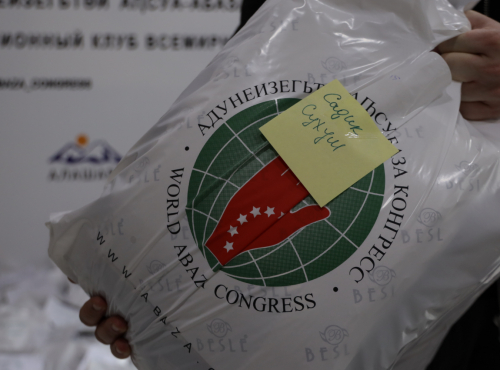 Over the past six months, another charity event "Soul Warmth" has been held - support for those in need in the form of distribution of sets of clothes and shoes. The action was organized by the World Abaza Congress, representatives of the Abkhazian Diaspora in Turkey and the Plenipotentiary Representative Office of Abkhazia in Turkey. Compatriots from Turkey, on the initiative of a member of the Supreme Council of the WAC, Ahmet Khapat, collect aid and send large humanitarian cargoes to Abkhazia on a regular basis. The latest action covered many settlements and institutions: the Gudauta COVID hospital and the Sukhum Infectious Diseases Hospital, boarding schools, kindergartens of the Republic. The batches of things were delivered pointwise to the residents of the villages of Guada, Arasadzykh, Gup, Atara, Kyndyg, residents of the Tkuarchal district, members of the Spiritual Administration of Muslims of Abkhazia. 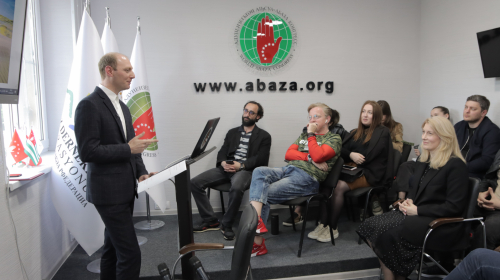 Language as a key to the history of the people: a lecture on the Abkhaz language was held at the WAC office

The WAC organizes events independently and takes part in national events. The head of the Sukhum office of the WAC, Timur Rekvava, said that, as in previous years, the Congress held a memorial action "Ashamaka" - the lighting of a ritual commemorative candle of Ashamaka on the Day of Remembrance of the Victims of the Caucasian War on May 21.

"The World Congress has been specially making it for several years with the help of the artist Timur Dzidzaria, involving young students to work so that they learn how to make a candle," said Rekvava.

Among the significant projects of the first half of 2022, Timur Rekvava named ethnographic lectures in the Sukhum office of the WAC by the candidate of historical sciences Dzhambul Indzhgiya. The lectures were on "The Abkhaz language is the oldest source in the study of the history of the people", "Alabashya (stick - ed.) in the traditional culture of the Abkhazians" and "On the issue of metrology of the Abkhazians." The lectures became popular with the audience.

The head of the Sukhum office of the WAC also noted the active work of colleagues from the St. Petersburg office of the Congress. Thanks to them, a number of interesting events, meetings were held, books were published, presentations were held, which are described in detail in the publications of the information portal.

"In St. Petersburg, on the of the "Grand Canyon" territory development, an exhibition-immersion "Breath of Height" was held. The works of the founder of the "Highland Abkhazia" Foundation Tengiz Tarba were presented there. The ensemble of the World Abaza Congress "Abaza" took part in the annual St. Petersburg ball of nationalities on St. Isaac's Square. The Peter the Great Museum of Anthropology and Ethnography (Kunstkamera) in St. Petersburg hosted a commemorative event dedicated to the 125th anniversary of the birth of Anatoly Genko, an outstanding linguist, ethnographer, folklorist, historian, one of the leading specialists in the languages and cultures of the peoples of the Caucasus," listed Rekvava. 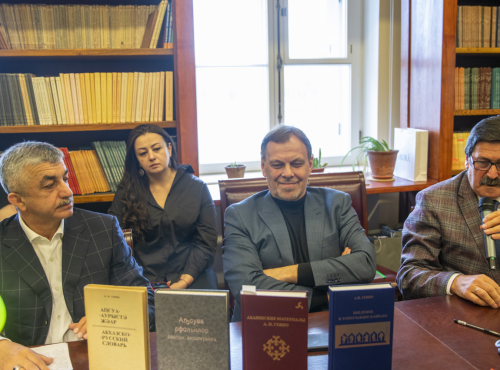 Commemorative event dedicated to the 125th anniversary of Anatoly Genko was held in St. Petersburg

He clarified that within the framework of the last event, a presentation of the recently published works of Anatoly Genko "Abaza Materials" and "Introduction to the Ethnography of the Caucasus" was held. Their publication became possible thanks to Mussa Ekzekov and the program "Abaza and Abkhazians: Preservation and Development of Languages and Historical and Cultural Heritage", approved by him, developed jointly by the Academy of Sciences of Abkhazia and the International Association "Alashara".

The head of the Sukhum office of the WAC added that 2022 is especially important for the Congress. This year marks the 30th anniversary of the organization, whose main mission is to unite Abkhazians and Abaza around the world.

"It is planned to hold a congress of the World Abaza Congress, which will bring together delegates from all over the world - from Russia, Turkey, Jordan, Europe, and all other countries where the Abkhaz-Abaza Diaspora lives. The thirtieth anniversary of the organization is a very significant and solid date. We feel great responsibility in preparing for the congress, which will also sum up the five-year fruitful work of the World Abaza Congress under the leadership of the Chairman of the Supreme Council of the WAC Mussa Ekzekov, and announce the plans of the Congress for the next five years," said Timur Rekvava.

International direction of the WAC 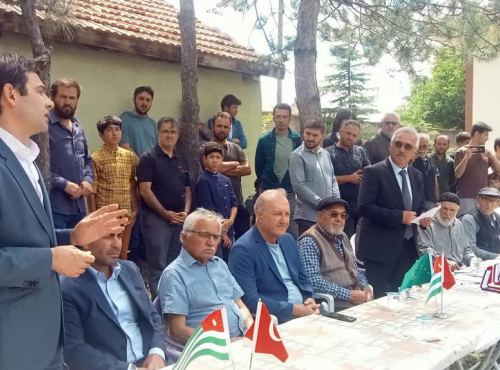 The intensive work of the Congress continues to strengthen ties with the numerous foreign Abkhaz-Abaza Diaspora. According to the Executive Secretary of the WAC, Inar Gitsba, the Congress is a platform that brings together representatives of the Abaza people around the world and contributes to the consolidation of the Diaspora abroad.

"Such activity becomes an important contribution to ensuring the safety and continuity of ethno-cultural values, preserving the language, national culture, and popularizing historical truth. Today, perhaps more than ever, there is a need to strengthen interaction between all Diaspora organizations," Gitsba said.

He expressed confidence that work in the international direction "will further strengthen ties between the historical Motherland and compatriots in all corners of the Earth."

"We are all united by a common concern for the future of our people. We are all interested in further consolidation of the Abkhaz-Abaza world, strengthening the authority of its representatives in the states of residence," he concluded.